Samsung’s Galaxy M series has been one of the success stories of the Indian smartphone market in recent times. The series saw Samsung finally get into the “good specs at relatively low prices” battle with the Chinese players dominating the mid-segment (around Rs 15,000) point of the market. And it did a very good job too – the M21 was one of the highest selling phones in the country in Q2 2020, as per IDC. And in the M series, the M30 and its successors have been the ones that have slugged it out with the likes of the Redmi Note and the Realme number series for supremacy around the Rs 15,000 mark. 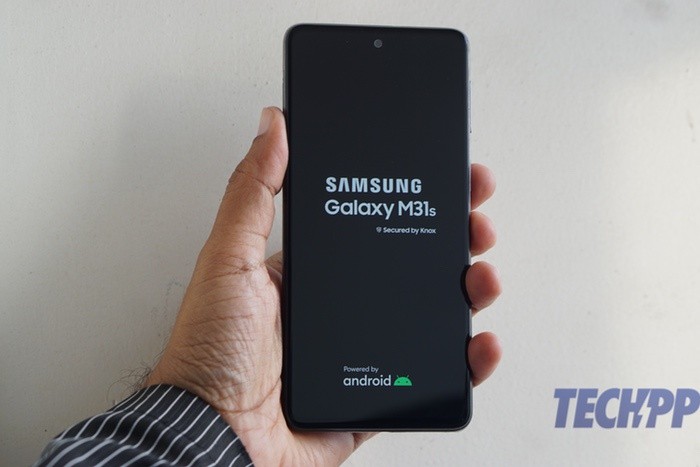 The M31s, however, has moved up a level. In many ways.

A higher price, and a lot remains similar…

The most obvious change in the M31s is its price. Whereas previous members of the M30 family had been priced around Rs 15,000, the M31s takes a big step ahead and starts at Rs 19,499 for the 6 GB/ 128 GB variant and commands a Rs 21,499 price tag for the 8 GB/ 128 GB one. Yes, some might say that the price rise was expected given the fall in the value of the Rupee and the increase in GST, but a closer look reveals a very different story.

It would HAVE to be a closer look, though, because, on the surface, the M31s looks like a typical Samsung Galaxy M series phone. You have a front dominated by a large 6.5-inch Infinity O display (with a punch hole notch in the top center), and what is now becoming a standard Samsung back in its non-flagship devices – glasstic (carbonate with a glossy finish to make it look glassy) with the camera unit in a rectangular enclosure in the top left corner. The colors are typically understated – Mirage Blue and Mirage Black (we got this one).

While the M31s is by no means a small phone, we were as always struck by how Samsung had managed to squeeze in such a big battery (more on it in the next paragraph) into a phone that weighs that just 203 grams (the Redmi Note 9 Pro weighs 209 grams), and oh yes, still has a 3.5 mm audio jack. Sadly, however, there is still no dust and water resistance.

Powering the phone is the Exynos 9611 processor which is becoming to the Samsung mid-segment phones what the Snapdragon 625 was to Xiaomi’s a few years ago. There is Samsung’s much-improved (and relatively uncluttered) OneUI running the system on top of Android 10.And yes, there is a massive 6000 mAh battery, just as there was on the M31 – in fact, the M30 series always has had huge batteries (the M30 started with 5000 mAh last year).

So far, so routine. But take a closer look and the changes start hitting you. And they might seem small initially, but they make a difference.

…and a lot has changed too! 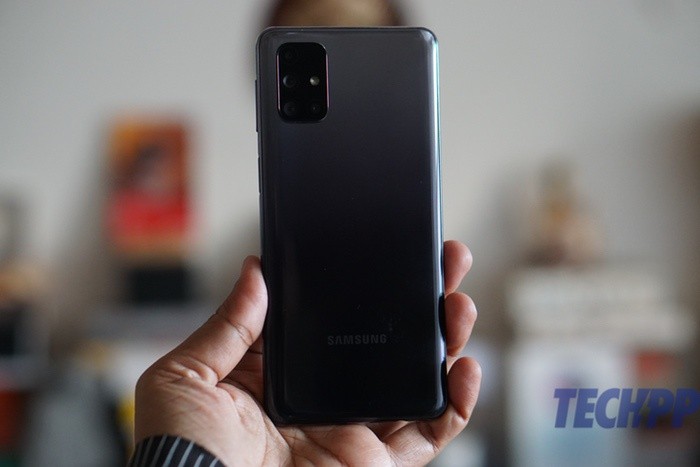 The difference hits you the moment you switch on the M31s. For the display on the phone is clearly a notch above what we have seen in the M series so far. It is a Super AMOLED Infinity O display similar to the ones we have seen in the more expensive A series devices and while some might frown at the “only 60 Hz refresh rate”, we were very impressed by its brightness and its typically poppy Samsung colors. This is easily the best display you can get at the Rs 20,000 price point. What’s more, it does not come burdened with a fingerprint scanner – yes, the M31s has a fingerprint scanner on the right, which doubles up as a power button. We totally approve, as it simply works faster and is more intuitive to use! 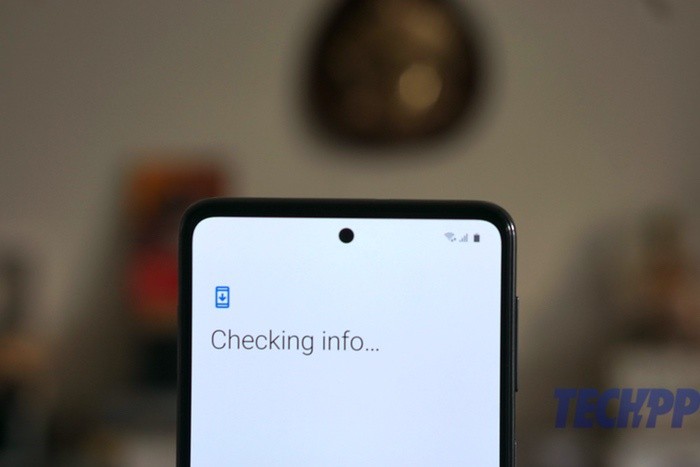 If the display is terrific for the price, the cameras are a huge and welcome surprise. Samsung has gone with a 64 megapixel Sony IMX682 main sensor, with a 12 megapixel ultrawide, and two 5 megapixel cameras, one for depth and one for macros. The main camera itself is a very capable one and delivered some stunning shots (close to what we have got on the Poco X2, which we think holds the aces in this segment) and yes, there was the usual hint of oversaturation that we see in many Samsung phone cameras but we do not see too many people complaining about brighter colors. The low light performance was not the greatest, but then at these price points, it seldom is – you will get decent snaps of people in low light conditions but forget about capturing wide landscapes and the like when the lights are low. And while portrait mode has improved, we are still not convinced about macro lenses.

Samsung has also thrown in some software features from its high end S series devices – so you have Single Take that takes a series of snaps and videos, adds its own filters and effects, and provides you with ten options that could include a boomerang and a hyperlapse. It is not something we used a lot simply because we kind of like controlling our snaps, but we can see folks liking it. What we however did like was the Intelli-cam feature popping up and advising us to use the 64-megapixel sensor for some shots. 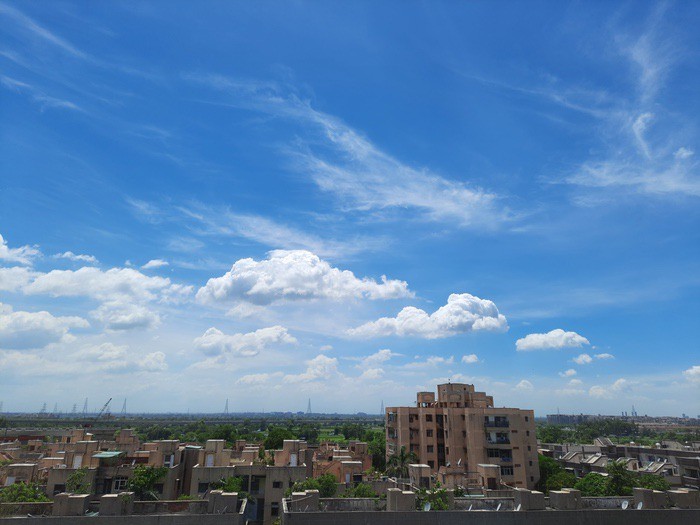 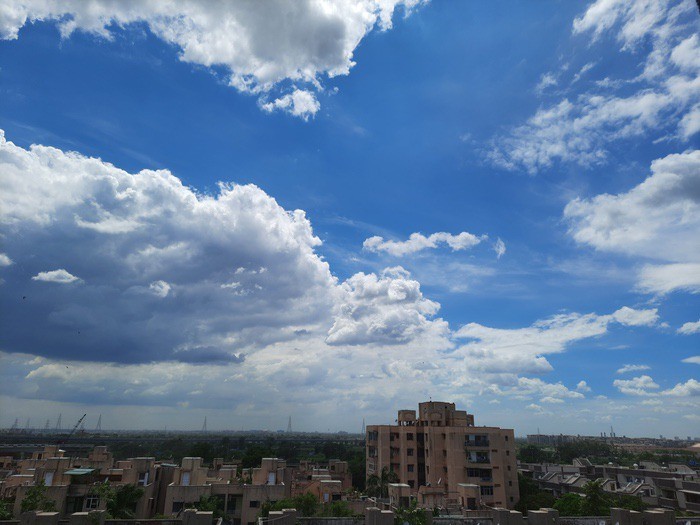 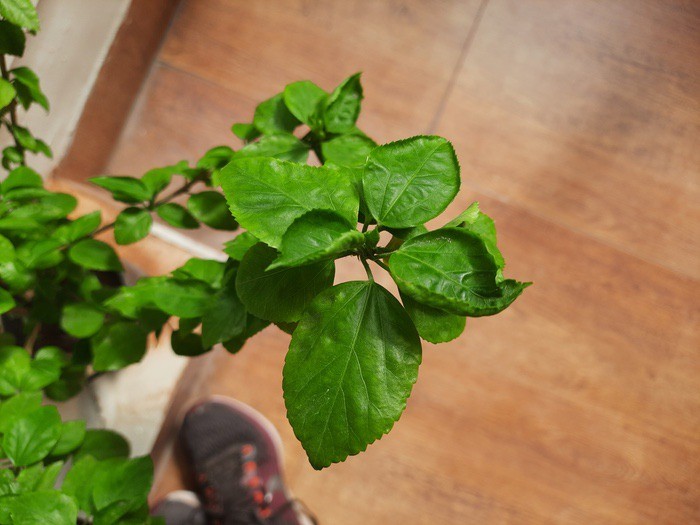 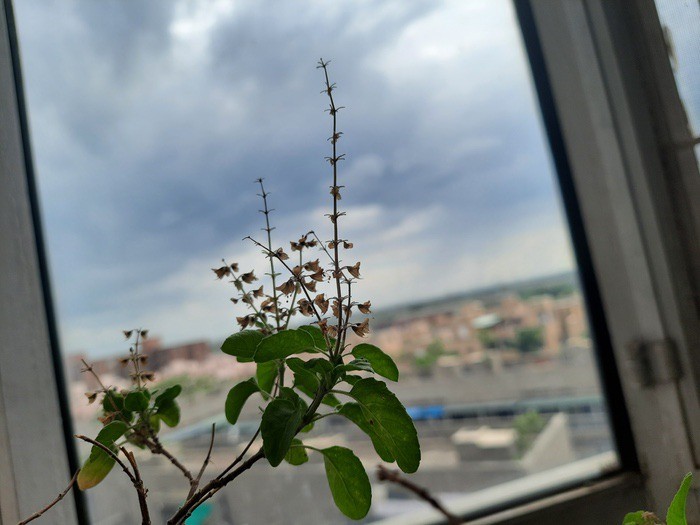 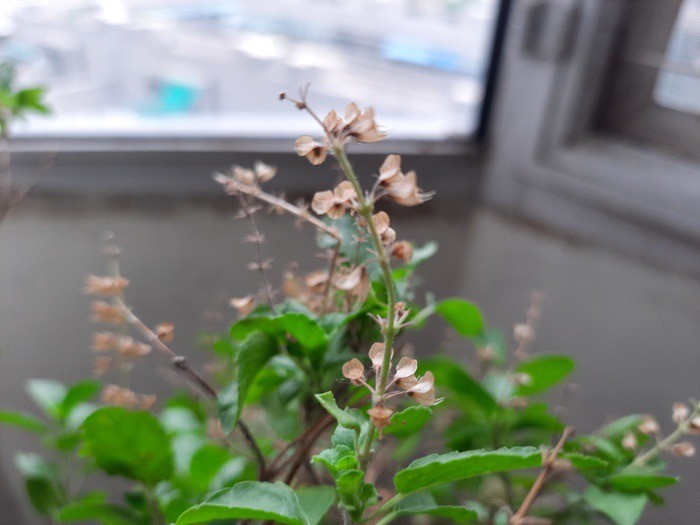 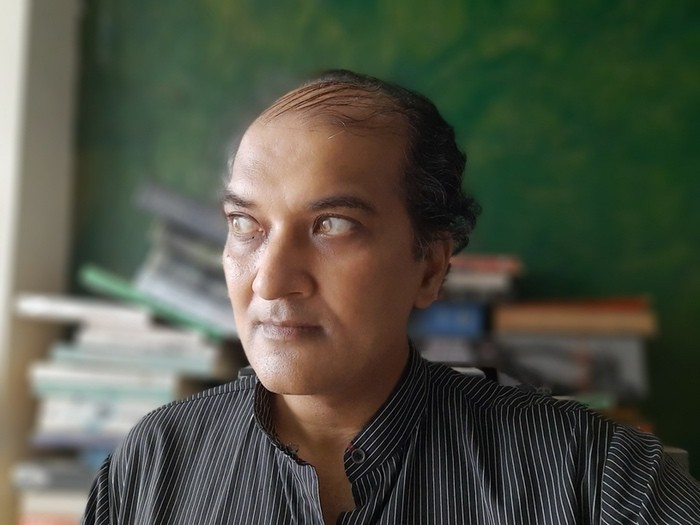 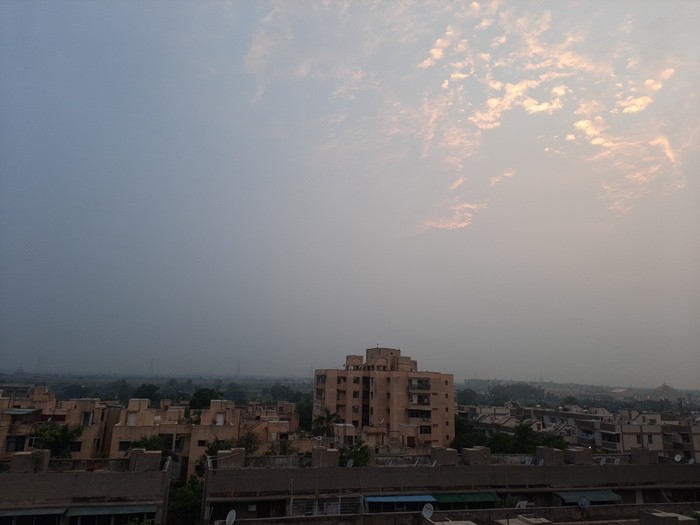 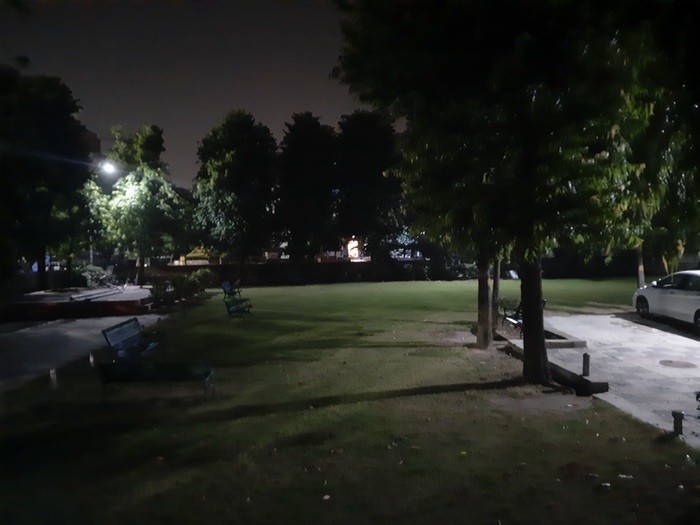 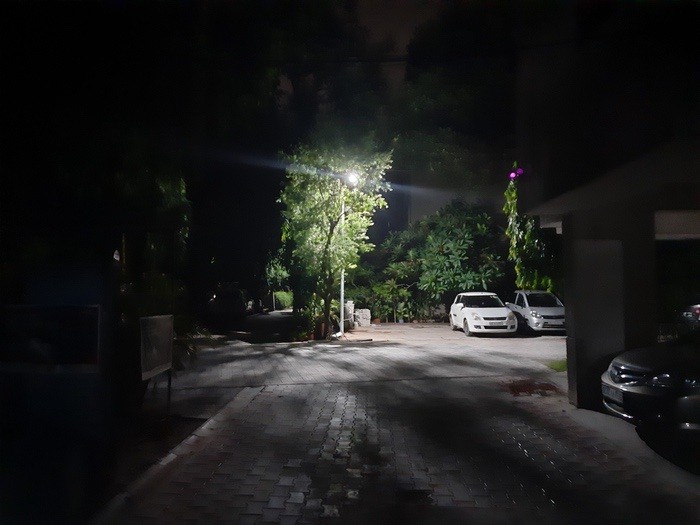 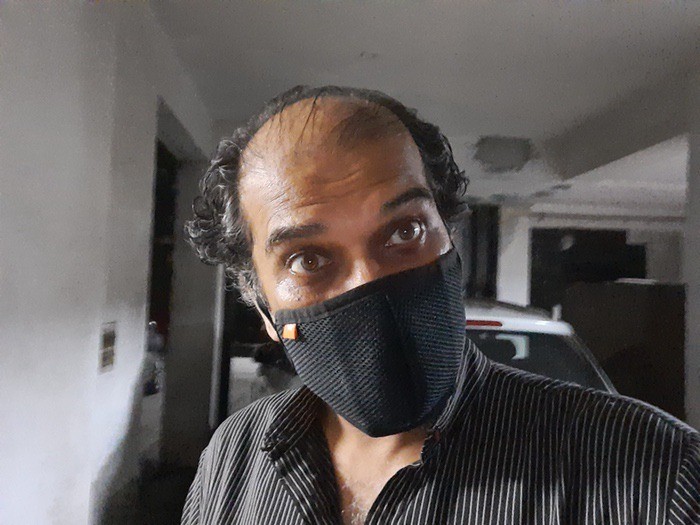 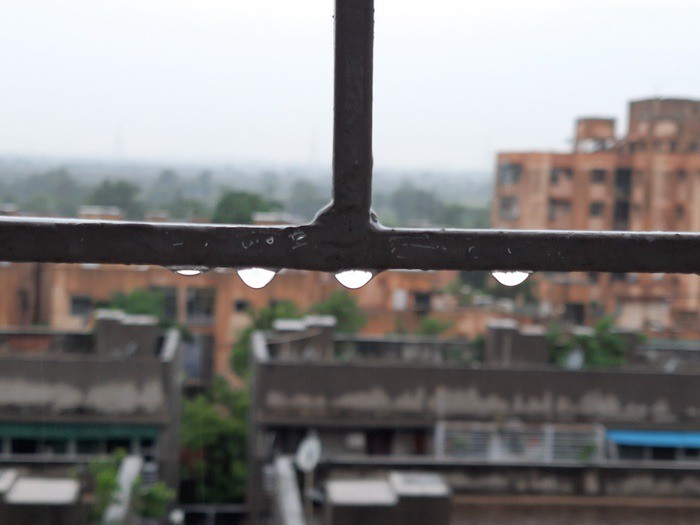 Another good feature is the ability to create filters yourself based on photographs you have taken – if you like the color composition of a shot, you can create a filter out of it and use it on other shots. We also liked the performance of the 32-megapixel selfie camera, which gave us some very good selfies as well as the option for slightly wider shots, although our appearance was just a little touched up (we mind it not).

Although both front and rear cameras are capable of shooting 4K videos, we do not really think videos are the strongest point of the M31s. Perhaps OIS would have helped matters. It is not as if videos by the M31s are bad, they simply are not in the same class as its still photographs, which we think are among the best in its price category. 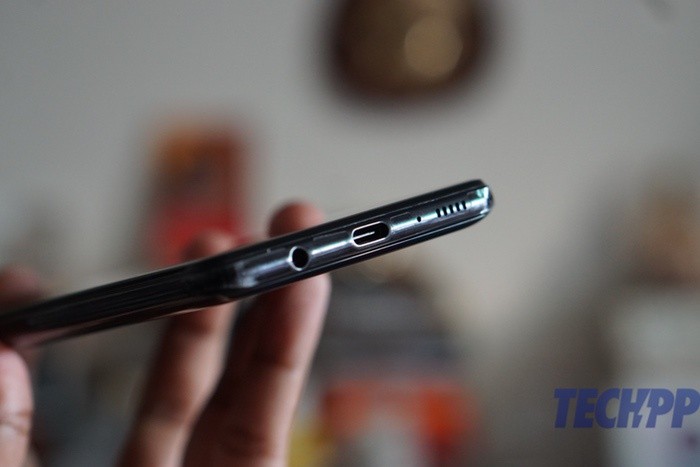 Another highlight of the M31s that puts it among the best out there in its segment is battery life. It comes with a 6000 mAh battery that goes past two days easily and now even comes with a 25 W charger which can charge the phone in well under two hours. A great addition in the box is a USB Type C to Type C connector which allows you to charge other devices from that massive battery!

This brings to perhaps the feature which many might consider to be the weakest link in the Galaxy M31s armor – the Exynos 9611 processor which has been used in a number of mid-segment Samsung devices in recent months, including the bestselling Galaxy A51. Well, to be honest, we did not face any major issues at it. Yes, it is not the sort of performer that will let you run heavy graphic games at maxed-out settings, but it gets most routine jobs done quite smoothly. This is not a phone for heavy gaming fanatics – yes, you can run PUBG and Asphalt on it, but be ready for the odd lag and pause. 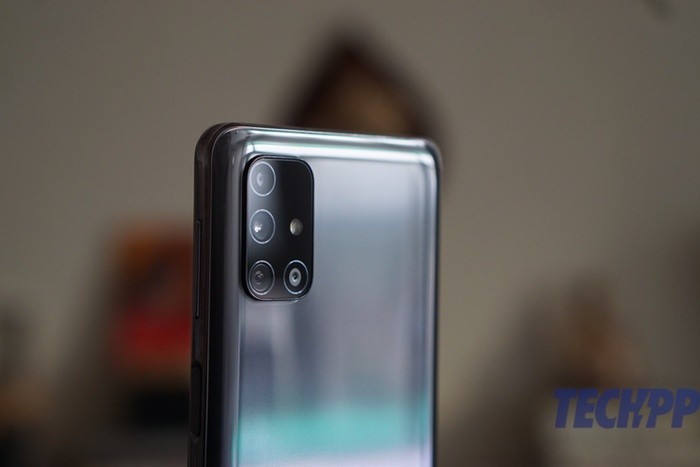 However, for most other tasks and running multiple apps, we faced no major problems. Mind you, those who have used the S series will find features like Single Take taking just a little more processing time here. But there are no heating issues and most general users are unlikely to complain too much about general performance.

In terms of general connectivity, the phone comes with dual SIM slots, a dedicated memory card slot to expand storage to 512 GB, 4G connectivity, Wi-Fi, GPS, and Bluetooth. The single speaker at the base of the phone delivers reasonably loud volumes (the quality is not really exceptional, though), and while we would have loved dual speakers, we know they are sadly a rarity at the price point. However, you can always plug in your wired earphones to that 3.5 mm audio jack and get some very decent sound. Call quality is good as well. You are not going to miss too much here.

Topping its segment and challenging others? 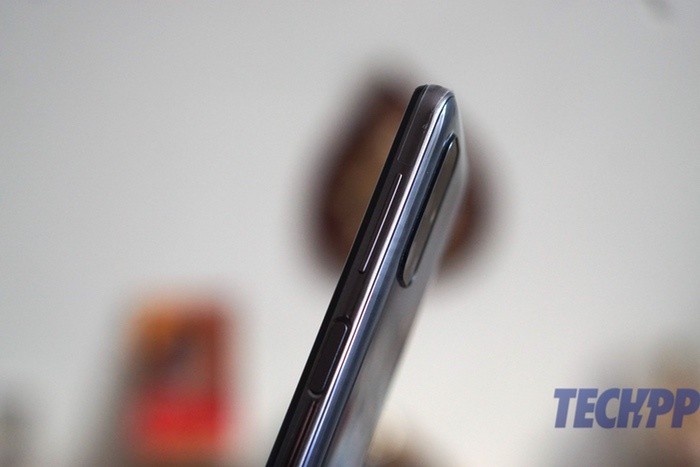 So should you consider investing in the Samsung Galaxy M31s? If your budget is around Rs 20,000, it is difficult to recommend any other phone at this time. Some might frown at that processor, but it performs well most of the time and is accompanied by a display, camera, and battery that are easily among the best in its class. What’s more, there are actually not too many new devices challenging the M31s. So much so that we have been getting requests for comparing the M31s with two other devices, which are actually not in its price segment – the Redmi Note 9 Pro Max and the OnePlus Nord.

Now, the Galaxy M31s costs a bit more than the Redmi Note 9 Pro series, and a bit less than the OnePlus Nord. It is good enough for those thinking of a high-end Redmi Note 9 series device to wonder if they could get more by spending a little more. It is also good enough for those considering a Nord to wonder if they could save a bit of money and still get a number of features, even while missing out a few.

The best smartphone in and around Rs 20,000? The Galaxy M31s is definitely a contender. And it is good enough to rattle one or two notable bestsellers above and below that price point as well.

It is in a very good place indeed. Between a Note and a Nord place.

Review Overview
Was this article helpful?
YesNo
TechPP is supported by our audience. We may earn affiliate commissions from buying links on this site.
Read Next
OnePlus 10T Review: A perfect (OnePlus) Ten
#review #samsung #samsung galaxy m31s