Reddit has become one of the most popular platforms for sharing opinions, news and stories. And with the ever-growing number of Android users, several Reddit apps have been developed to give users more control over their Reddit experience.

There are many third-party Android Reddit apps, but the ones listed below are among the best we have used. They stand out from the rest of the other apps with unique features that make using Reddit on Android more enjoyable. We had earlier made a list of the best Reddit apps for iPhone, and now let’s look at Android.

How to choose the best Reddit client for Android?

If you want to choose the best third-party Reddit app for Android, you should consider a few factors. Your first and most important consideration should be what you want to do with the app. Various third-party Reddit clients provide different features. For example, one app offers the lazy load feature that automatically scrolls through the feed, and the other provides a simple and clear interface. Before choosing anything from this list, you should prioritize which features you want.

Second, we need to consider the user experience. Another important thing to consider before choosing the best Reddit client for Android.

Last but not least, how much you are willing to spend is crucial. Most Reddit apps for Android come in free and paid versions. You can pay a premium depending on how much value a particular feature in the app offers.

Ideally, a Reddit app should provide a comprehensive and clean user experience. The feed must be chronologically ordered, and all sections, like notifications and news, should be easily accessible. In addition to meeting the above criteria, all the apps listed below have been extensively tested for stability and reliability. 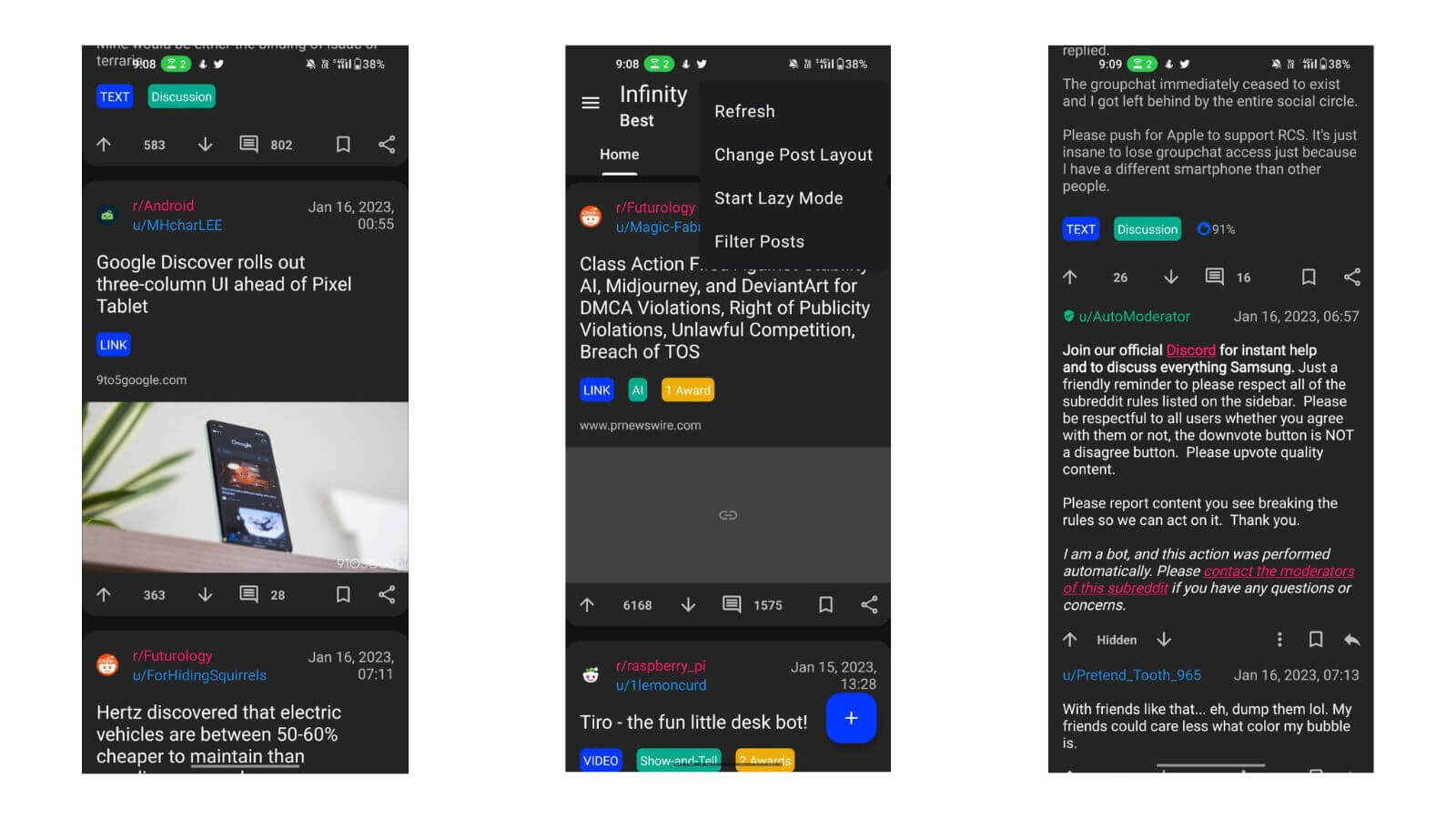 Infinity for Reddit is the most popular and one of the best third-party Reddit apps for Android. The app has several features that set it apart from other apps, including a customizable layout, the ability to browse multiple subreddits at once, a built-in media viewer, and a lazy-load feature that automatically scrolls through the feed.

A great feature is an ability to customize the layout. Users can select from a variety of themes and color schemes, as well as customize the font and size. In addition, the app allows users to organize their subreddit subscriptions in a way that makes sense to them, with the ability to group similar subs together and hide uninteresting subs.

This free Reddit app also allows users to switch between subreddits without leaving the app, making it a good choice for those who use multiple Reddit accounts.

My personal favorite feature of this app is the “Lazy Load,” which automatically scrolls through the feed based on the interval time. The default setting is 2.5s, but you can easily extend it up to 10s in the settings.

The app is completely free to use. Once you install the app, you can sign in with your Reddit credentials and start using the app right away. 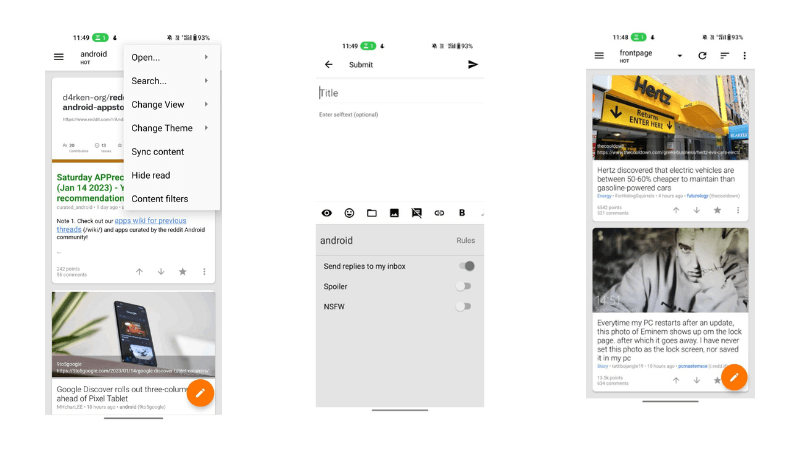 Sync for Reddit is an excellent app for users who want the best user experience when using Reddit. The app features the latest Material U design. With its user-friendly card interface, multiple account support, and advanced features, Sync makes it easy to keep up with the newest Reddit content and discussions.

The intuitive navigation of the Sync for Reddit app is a key feature. The application allows users to quickly navigate between different Reddit communities or “subreddits” and access their favorite content. In addition to being able to change the font size and color scheme, users can also customize the layout of the app with different themes to suit their preferences.

The app supports multiple Reddit accounts. This allows users to easily switch between different accounts to follow the conversations of different communities. Push notifications are also supported so that users are informed about new content and comments even if they are not actively using the app.

Sync for Android comes in both free and paid versions. All the features are included in the free version, but with ads. You can remove the ads by upgrading to the Pro version, which costs $4.99. 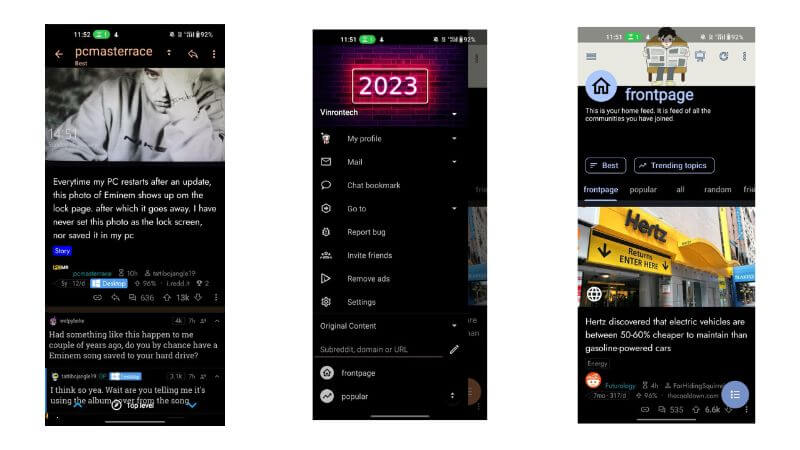 Joey for Reddit is a great app for anyone who wants a more enjoyable mobile Reddit reading experience on their phone. With the full-screen mode interface, it is easier to read the content on the screen. It is also loaded with other cool features like gesture navigation, full content customization, and multiple account management.

Apart from an intuitive user interface, the app also offers the ability to track comments and receive relevant notifications. It also allows downloading videos and photos found on Reddit with simple clicks. The app automatically hides posts you have already read and has a decent theme system to get you started. 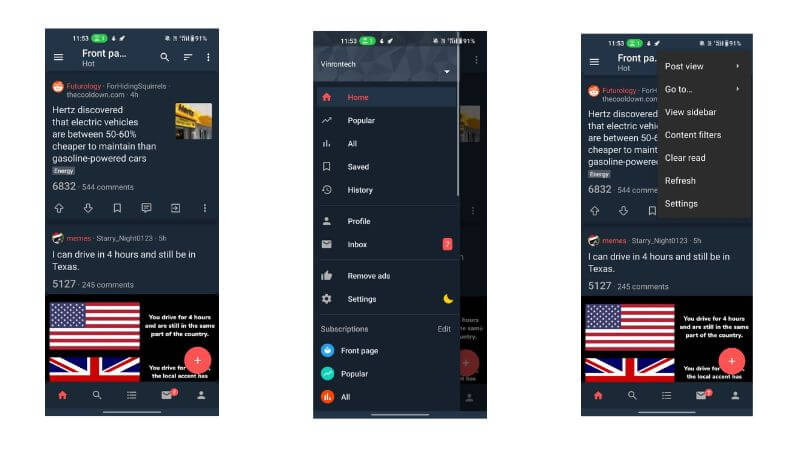 One of the best things about Boost is its familiarity, thanks to the closeness of the UI to the official Reddit app. The app is simple and easy to use, making it suitable for experienced Reddit users and people who have never used it before. The app also offers users many ways to customize their experience.

Boost offers a wide range of themes, including light and dark modes, making it easy for users to customize the app’s look to their liking. The app also supports custom themes, allowing users to create their unique look and feel.

Apart from the user-friendly interface and customization options, it also offers other features like built-in account switching, which allows users to easily switch between multiple Reddit accounts without having to log out of the app.

Boost for Reddit offers both free and paid versions. The free version comes with built-in ads. If you want to remove the ads, you can upgrade to the Pro version, which will cost you $2. 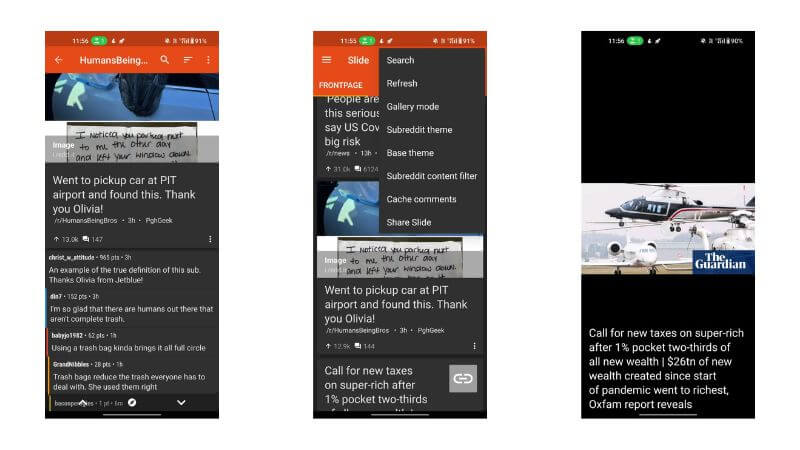 Slide for Reddit is a great app for those who want to easily browse Reddit content on their Android phone or tablet and have a clean user experience. The clean and user-friendly interface, multiple account support, and the ability to use the app offline make it an excellent choice for casual and power users alike. The app also has a mode called “Sepia” that makes reading text easier. 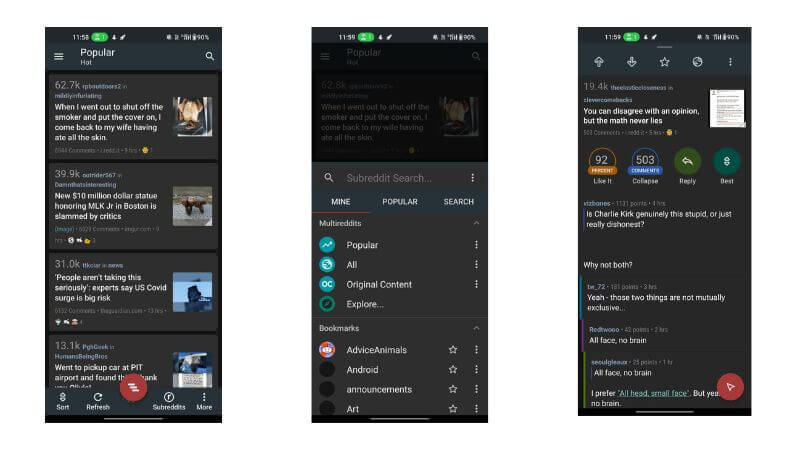 Relay for Reddit is a good choice for those who want to use an app with the best browsing experience. It features the latest Material U design with a card interface that makes it easier to use and interact with the content. The app also has gesture-based navigation controls, making it the best for browsing Reddit.

It has a clean, simple layout that makes it easy to find and interact with the content you want. The app also has a search feature that allows users to find specific content or communities on Reddit quickly.

There are both free and paid versions of Relay for Reddit. The Pro version omits this feature and adds other features, such as advanced comment navigation, searching for words in posts, and full moderation capabilities. 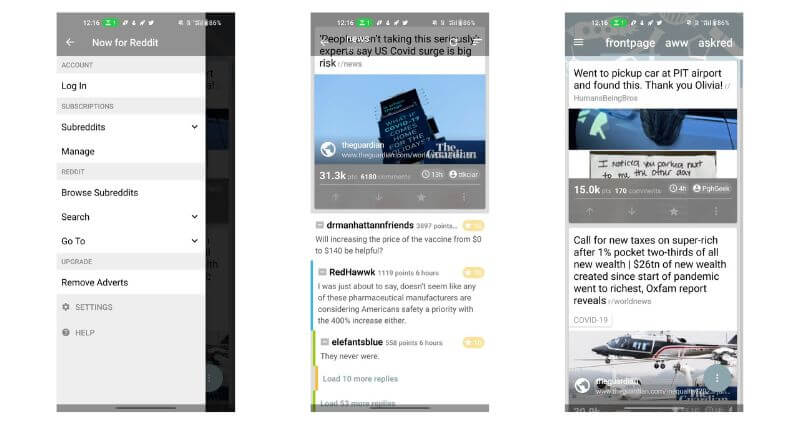 Now for Reddit is an essential app for users looking for a lightweight third-party Reddit client for Android. This Android app offers a clean, minimalist interface that makes navigating through the various subreddits easy and keeps track of your favorite Reddit content.

The app is also ad-free and free, which is another plus. The app is available on the Google Play Store; you can download it and start using it immediately if you are looking for a minimalistic Reddit client and use an Android smartphone with limited processing power. 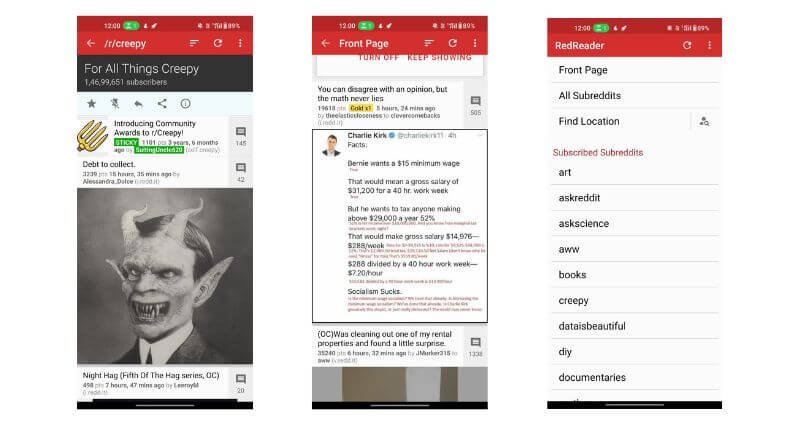 Redreader is a good choice for those looking for a powerful and customizable Reddit app best suited for retrieving media on Android. Its intuitive interface, offline support, and advanced features make it one of the best choices.

One of the main features of Redreader is its customizable user interface. Users can customize the font size, color scheme, and layout to suit their preferences. The app also supports multiple accounts so that users can easily switch between different Reddit accounts.

Another great feature of Redreader is its offline support. Users can download content and save it to their devices so that they can access it even without internet access. This is especially useful for users who are often on the go or have limited data plans. 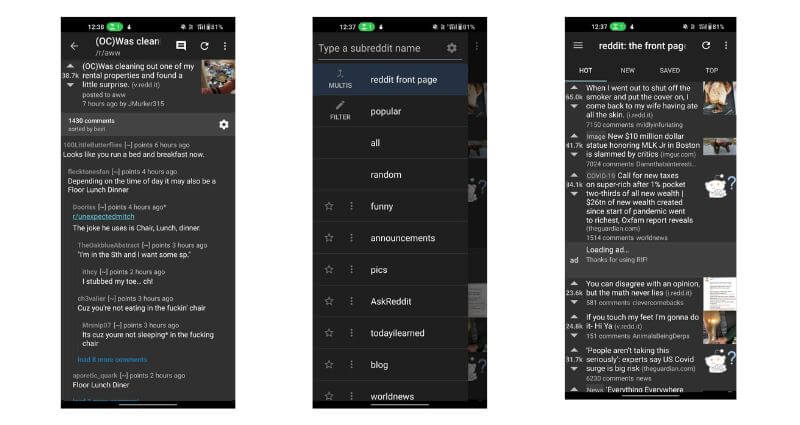 The app also offers a number of customization options that allow users to personalize their experience according to their preferences. Users can change the app’s theme, font size, and more to customize the look and feel of the app to their liking. It also includes a number of tools for moderating and managing your communities.

Finally, RIF is fun for Reddit and offers a number of other useful features, such as the ability to save posts for offline reading and receive push notifications about new content; the app is completely free and contains ads. Overall, this app is a good choice for anyone looking for a simple and effective way to stay connected with the Reddit community. 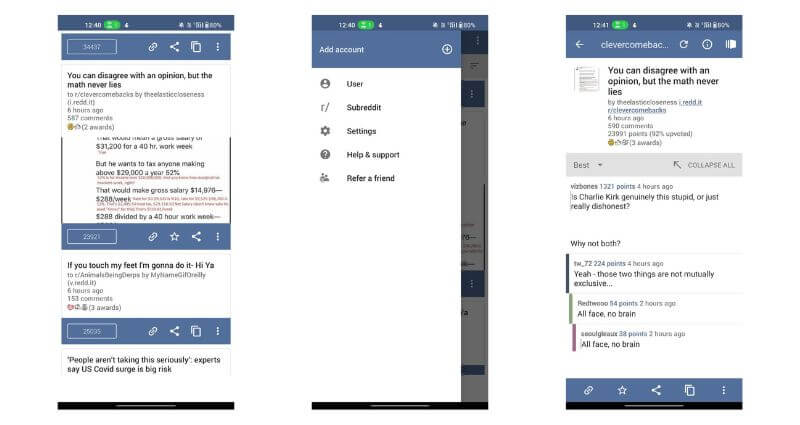 BaconReader for Reddit is another popular third-party Reddit client available for Android. It offers a user-friendly interface, customizable settings, and a variety of tools for browsing and interacting with content on Reddit. Whether you are a casual user or a power user, BaconReader is a great choice for you, with a lot of customization.

Users can choose from a variety of color schemes and fonts to personalize their experience. The app also allows users to organize their subreddit subscriptions into custom folders, making it easy to navigate to the specific content they are interested in. BaconReader also supports multiple accounts. You can easily switch between multiple accounts without logging out of the app.

Overall, BaconReader is one of the best apps for Reddit if you are looking for an app with numerous features to customize and improve the user experience. The app is free to use and download.

So, that’s the list of the best Reddit apps for Android in 2023. Each app in this list has its own unique features and benefits. Our personal favorite is Infinity for Reddit, as it offers a lot of features that a power Reddit user needs. We hope this article makes your decision a little easier. Let us know in the comments if you have found other great Reddit clients on the Google Play Store.

When it comes to using third-party Reddit apps for Android, make sure you download apps from reputable sources like the Google Play Store. Also, make sure to check app reviews before installing them on your Android smartphone. Always check app permissions before granting access to the device. Following these simple security steps ensure that your experience with third-party Reddit apps is safe.

Why can’t I just use Reddit in a browser?

Using third-party Reddit applications gives you more features, such as custom settings, the ability to follow your favorite topics on Reddit, image previews, the ability to stay logged in, and more, which the default browser does not offer.

When you visit Reddit on your mobile browser, follow these steps to bypass Reddit's "open in app" pop-up:

Was this article helpful?
YesNo
TechPP is supported by our audience. We may earn affiliate commissions from buying links on this site.
Read Next
6 Best Reddit Apps for iPhone and iPad in 2023
#android #Best Apps #Reddit 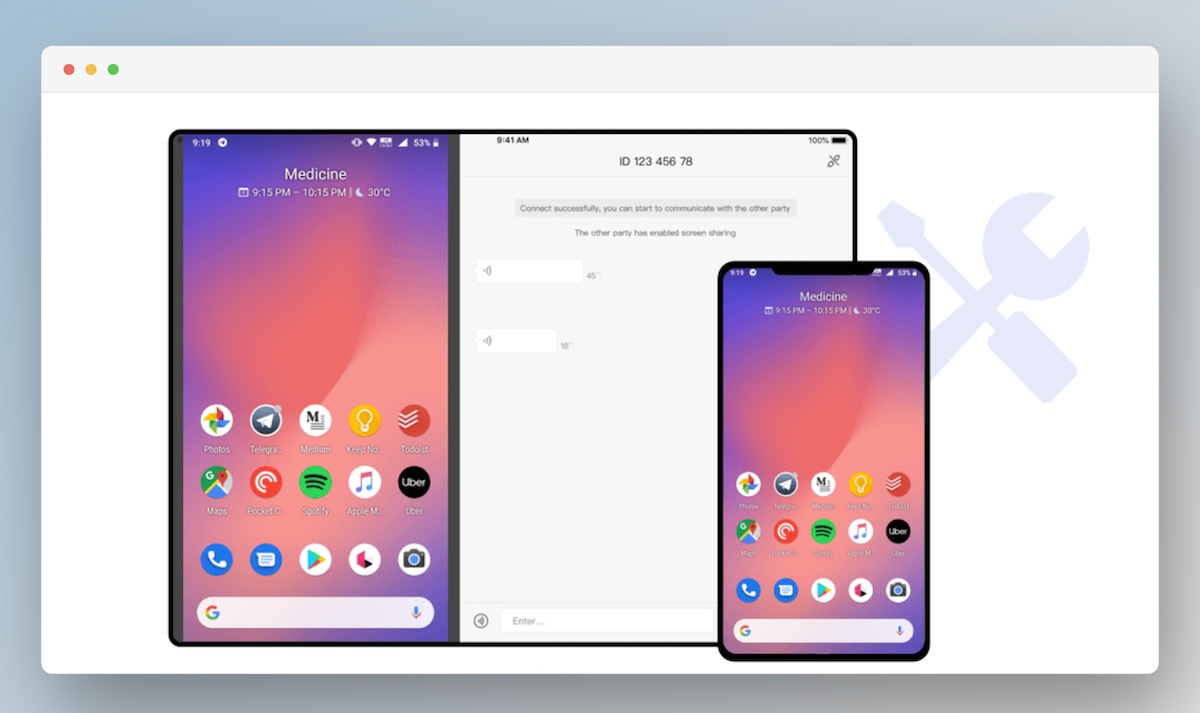 AirDroid Remote Support: An All-in-One Solution for All Your Remote Solution Needs 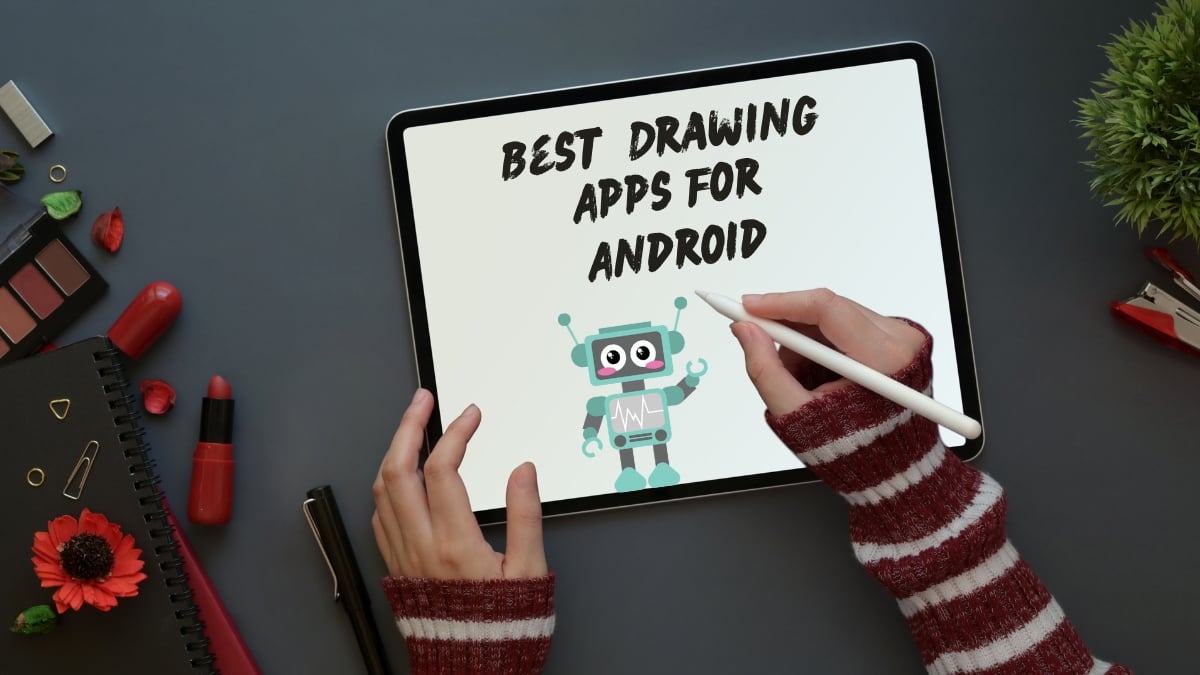 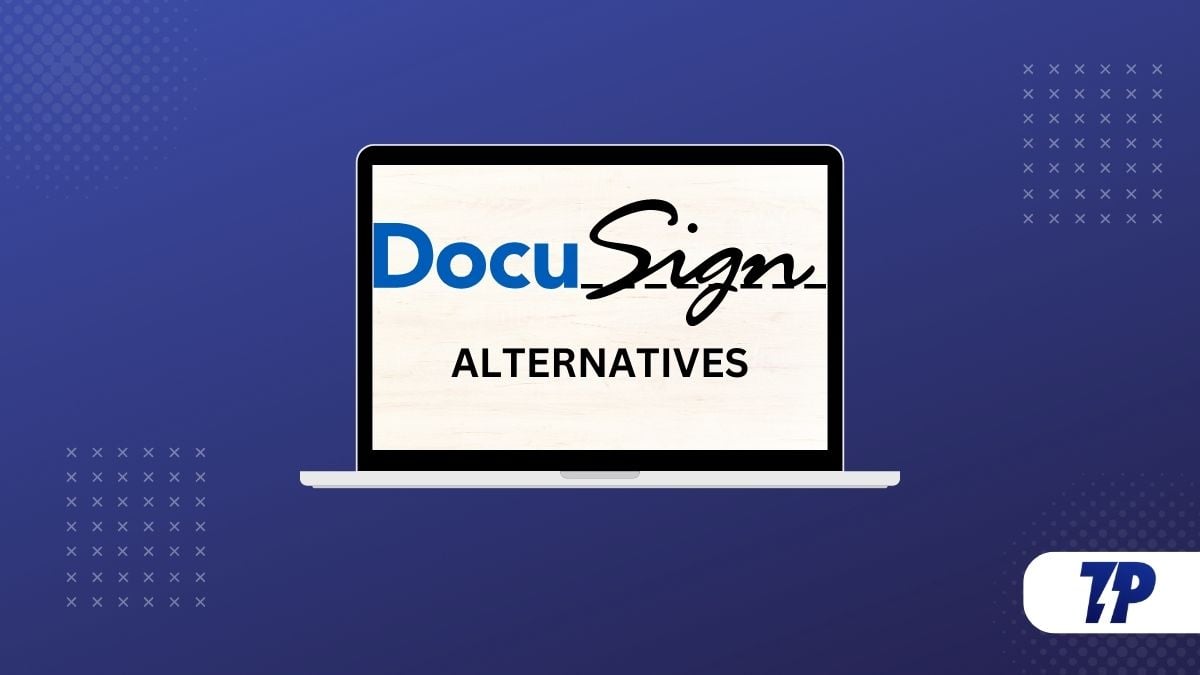 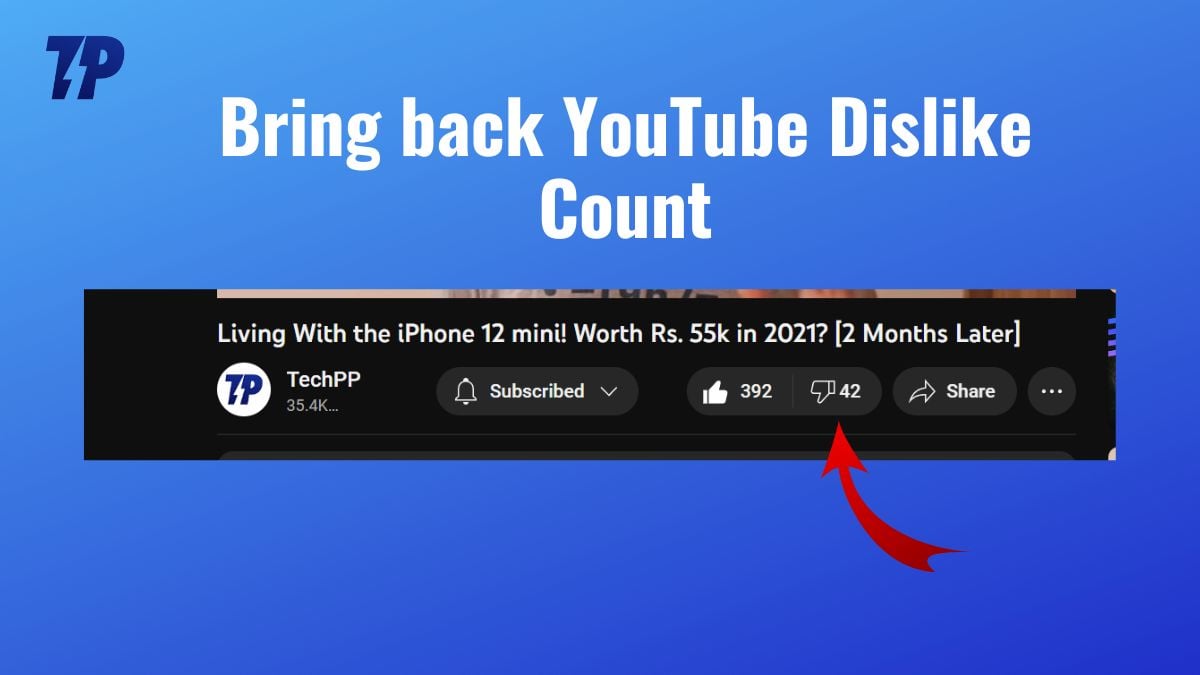 How to Check YouTube Dislike Count on Any Video [2023] 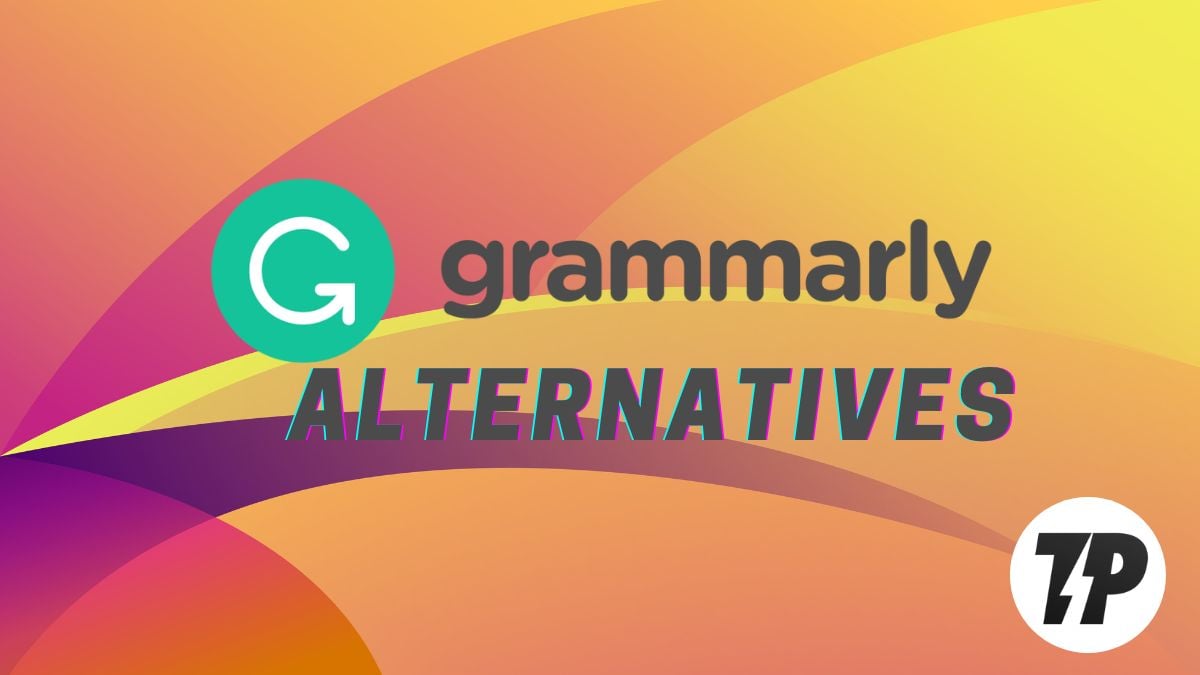