The Kindle has been with us for more than eight years now (it made its debut in late 2007 – the year which also saw the world get a first glimpse of a phone from a certain company in Cupertino) – and in that time has carved a niche for itself as being without doubt the best option for anyone who wants a dedicated device for reading books. For, make no mistake about it, while the Kindle does come with a rather basic browser, it is first and last an e-book reader – it is designed to read e-books, hence the e-ink display which is wonderful to read even in bright sunlight and which according to some, strains the eyes far lesser than the LCD or AMOLED display of a phone or a tablet. And its form factor has reflected its function-above-flair theme raison d’etre – it existed to be read, not shown off. Even the relatively high-end Voyage stuck to an almost standard design template. 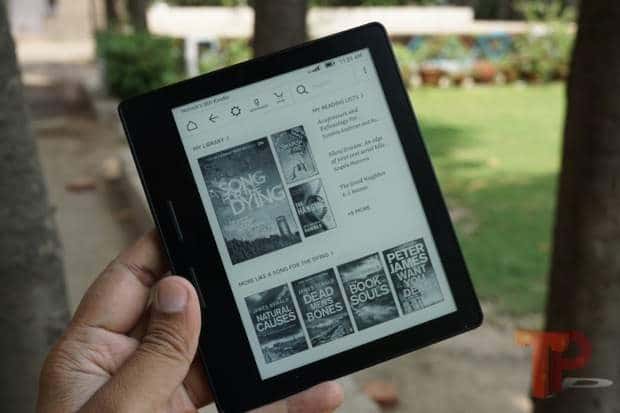 The Oasis, now, is a very contrary beast in the Kindle stable. Whereas Kindles in the past had largely looked similar but had been differentiated in terms of innards, the Oasis actually packs in guts that are similar to the Voyage, but looks unlike any Kindle we have seen before. Yes, it has the same 6.0-inch display that e-bookworms have grown accustomed to, but whereas previous Kindles were significantly taller than they were side, the Oasis has a much smaller difference between those two dimensions. Its form factor has gone from being a tablet-like device to something like a compact disk (CD) case. The Kindle Voyage was 162 mm long and 115 mm wide, whereas the most recent Paperwhite was 169 mm long and 117 mm wide – the Kindle Oasis is 143 mm long and 122.5 mm wide. And while the Paperwhite tipped the scales at a healthy 205 grammes, and Voyage weighed 180 grammes, the Oasis is a stunning 133 grammes. 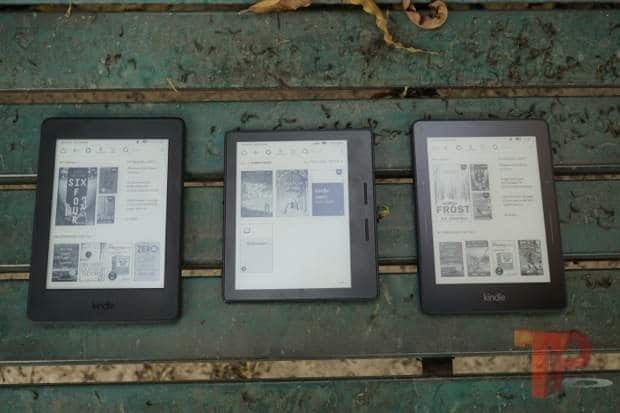 In simple English: the Kindle Oasis is shorter in length than the iPhone 6S Plus, and is much lighter as well, in spite of packing in a larger screen. There is also the matter of thinness, discussing which is very much in fashion – the Paperwhite was 9.1 mm thick, the Voyage a much more svelte 7.6 mm, and well the Oasis at its thickest point, falls between those worthies at 8.5 mm. Mind you, the Oasis is a utterly wafer-thin 3.4 mm for most part – it is only at one of its sides that it bulks up. Small wonder Amazon is calling it its “thinnest and lightest Kindle ever.”

Which of course, brings us to the biggest design innovation of the Oasis – the spine or “ergonomic handgrip” as Amazon refers to it. In concept, it is akin to what we have on Lenovo’s Yoga series of tablets – one side being slightly bulky to make the device easier to grip – but whereas in the Yoga tablets, the ‘grippy’ side was spherical, in the Oasis it remains flat. On it are two page turn buttons – one for the next page and the other for the previous page, and right on the top of this section of the device are the micro USB port and the display/power button (which has been shifted from being on the back on the Voyage). And on the back of the device, in the middle of the grip are three magnetic connectors, using which the Oasis can be connected to a special leather cover, which is part of the package in India. The cover slots in smoothly over the back of the Oasis, connecting with a click to the connector points, making the device appear a bit more level, and easier to hold. It has a battery in it as well so it not only makes the device a bit more balanced but also adds to its battery life. And well, we would recommend using the device with the cover because notwithstanding all the claims about its strength, this is one Kindle that we would be terrified of dropping while reading. 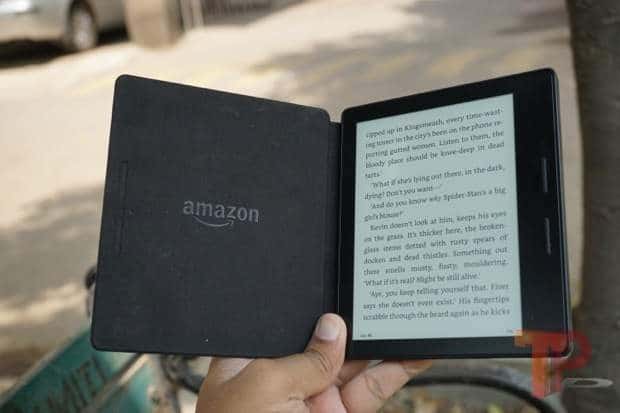 So on to the one thing that the Kindle is still designed for – the little matter of reading. As we pointed out, the display is the same size as those seen on the Paperwhite and Voyage and also has the same 300 ppi resolution that we have seen on that duo. However, we are told that the lights have been redesigned, giving is “60% more LEDs than any other Kindle” and yes, the Oasis does seem brighter in low light conditions, although we honestly think that the Voyage and Paperwhite handled them well enough too. The big – literally – feature of the Kindle Oasis is that ‘grip’ and well, we thought it did a decent job. The device has an accelerometer so you can grip it with either hand, and yes, the buttons switch functions depending up which hand you are gripping the device with – the button on the top will always take you a page ahead, while the one below will always take you to the previous page. Honestly, though, we are not sure we are as comfortable holding this device in our hands as we were the previous Kindles, which thanks to their greater bulk, seemed more…well, sturdy. Yes, we know it has been designed for one-hand use, but then we have used all Kindles (barring the rather large DX) one-handed anyway.

Battery life is still described in terms of “weeks” and goes into “months” if you use the case. From what we have seen so far, prolific readers (2-3 hours a day) will need a recharge a week minus the cover. And this will of course be significantly upped when you attach the cover to it. Those who monitor battery life carefully might notice a slight dip as compared to the Paperwhite and Voyage, but for us the Kindle Oasis carries forward the “charge once and forget about it for a while” tradition of the Kindle range. Storage stands at a very respectable 4 GB – enough for more than a thousand books. 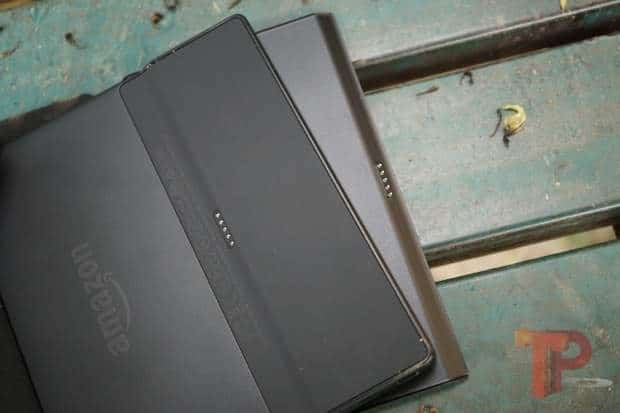 And well, it remains a joy to read on. We not only love the display which is visible in all conditions, but also the sheer convenience of being able to tweak fonts, font sizes, make notes, drop bookmarks, check word meanings and share excerpts on social networks. There is also the little matter of being able to read the same book on different devices – so you can start off on your Kindle, continue reading on your computer (exactly from where you left off) and even grab a quick page or two on your smartphone, before going back to your Kindle at the end of the day or in any other order that you wish. Of course, you can browse books, view excerpts and buy books wherever there is a data connection – the Kindle Store which has hundreds of thousands of titles never shuts down. Frankly, in terms of digital reading, the device is a joy to use, even though we are going to reiterate that the shape of the Oasis takes some getting used to. 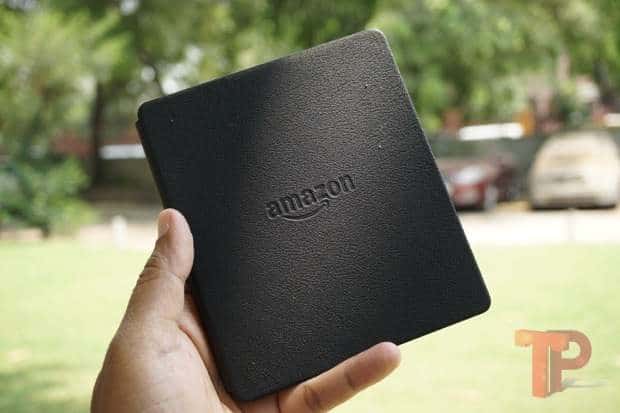 What also takes some getting used to are the interface quirks. The e-ink touchscreen will frustrate those who are used to the lightning quick responses of iOS, Windows and Android devices – there is a clear pause before something happens. Then there is the rather quaint fact that the display cannot be ‘woken up’ by the page turn buttons – one has to hit the ‘power/display’ button on top of the device for that (although the special case again comes to the rescue – it acts as a smart cover and unlocks the display whenever you lift it). Finally, the Kindle interface continues to be less than perfect in touch terms – you need to tap to turn a page and need to tap near the top to access menu options, so you often end up turning a page when you needed to see the menu and vice versa, as the tap remains the same. And yes, reading graphic novels, especially ones with “dark” elements – we are talking to you, Caped Crusader – remains an iffy experience.

Got the bucks? Want change? Get it!

Style and substance – the Kindle Oasis has both of them in spades. It looks very different from any Kindle, is super light and compact, and continues the Kindle’s tradition of e-book reading excellence. Unfortunately, it delivers all this at a rather hefty cost. The Kindle Oasis starts at Rs 23,999 for the Wi-Fi only version in India ($289 in the US), and Rs 27,999 ($359) for the Wi-Fi plus 3G version (both come with the special leather cover), which puts it rather too close to iPad mini and Lenovo Yoga tablet territory. Yes, there is the argument that this is a specialised reading device but then even the Paperwhite and Voyage, which do not suffer too badly in comparison when it comes to features and core reading functionality, start at Rs 10,999 and Rs 16,999 respectively. Many people will point out that you can get a Kindle Paperwhite AND a decent tablet (like say the Xiaomi Mi Pad 2) for less than the price of a Kindle Oasis. And perfectly correct they are too. 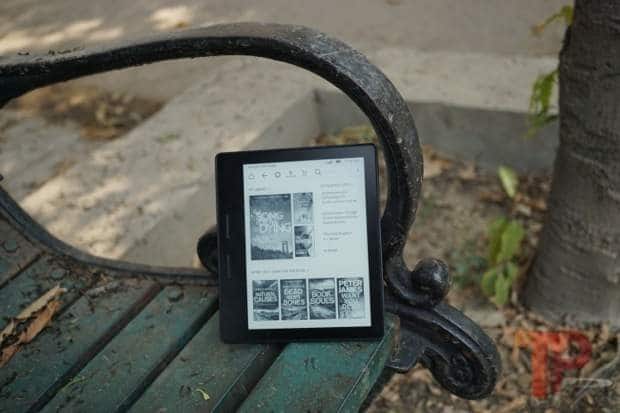 So, why then should anyone go for the Kindle Oasis at all? The answer is something you would expect from Cupertino – for the design and experience. For the Oasis delivers the best e-book reading experience in a totally different form factor – one which takes some getting used to and one which we must confess we are not totally comfortably with, but one which is infinitely more portable (it actually can slip into the trousers of your denims) and one which will do something that very few Kindles have been able to do before – turn heads by dint of sheer physical beauty.

Would we recommend it to a book lover on a tight budget? Not unless we wanted our sanity questioned. For them, our recommendation remains the Paperwhite. But if budget is not an issue and the aforementioned bookworm wants something that goes well beyond his or her well-worn Kindle? Ah, then we would push the Oasis forward and sit back and watch them nibble away happily at what is definitely the most spectacular device in e-book town.