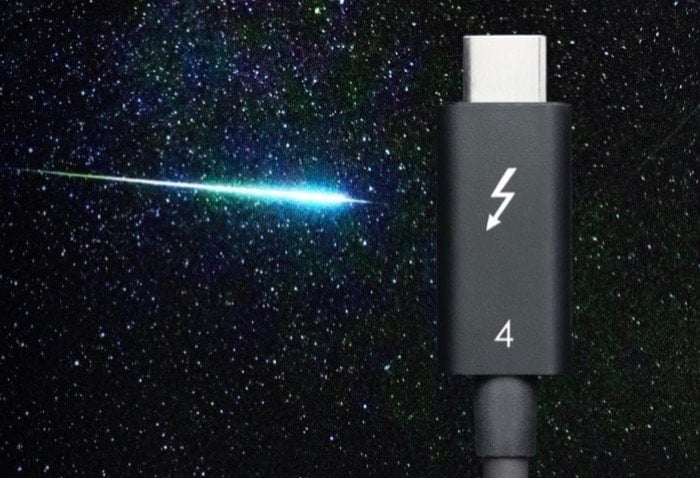 A Thunderbolt connector, for those unaware, is a standard developed by Intel in collaboration with Apple. It was first adopted by the Cupertino-giant, in the year 2011. Soon after, other laptop manufacturers hopped-on to the bandwagon and started embracing Thunderbolt on their high-end offerings. The idea behind the Thunderbolt standard was to offer a universal port for high-speed connection to peripherals such as the external drives, network interfaces, video output for external displays, and high-end storage solutions like RAID arrays.

One of the biggest advantages that Thunderbolt brought along was the bi-directional capabilities, which allowed for simultaneous transmission and reception of data. Thus, ensuring faster and reliable performance compared to the then-popular standards. Not to mention, the standard also made things convenient by offering the ability to have to rely on a single adapter/cable to be able to connect and access different devices. A reason for Thunderbolt’s such widespread usability and capability is the fact that it is a combination of PCI Express (PCIe), Display Port (DP), and serial data communication, which makes it kind of universal for data and power transfer.

Over the past few years, Thunderbolt has evolved and reached a point where it is confused and associated with the USB-C standard. For, after the Thunderbolt 1 and Thunderbolt 2 standards, which used the same connector as the Mini Display Port (MDP), the next (and the current) generation of Thunderbolt, Thunderbolt 3, moved to the USB-C connector from Universal Serial Bus (USB).

With Intel announcing Thunderbolt 4, there’s not much that has changed, since the newer specification builds upon Thunderbolt 3 and tops out at 40Gbps speeds, same as the Thunderbolt 3, for data and power transfer over a single connection. However, it is the other aspects that it introduces new changes in, which kind of help in improving the performance of the standard.

To begin with, with Thunderbolt 4, Intel suggests offering docks with up to four Thunderbolt ports and universal cables of up to 2 meters in length, which is the first time for the Thunderbolt standard. The silicon-giant also suggests that its latest Thunderbolt specification is compliant with existing industry standards, such as USB4, DisplayPort, and PCI Express (PCIe), and is also compatible with the previous generation of Thunderbolt and USB products.

Moving right along, based on Thunderbolt 4’s certification requirements, which are required by a company making products to abide by to get their product certified as Thunderbolt 4, it seems that Thunderbolt 4 will introduce the following changes–

1. Ability to power two 4K displays or one 8K display
2. Support for docks/accessories with up to four Thunderbolt 4 ports
3. Transfer rate of 32Gbps over PCIe
4. USB 4 compliance 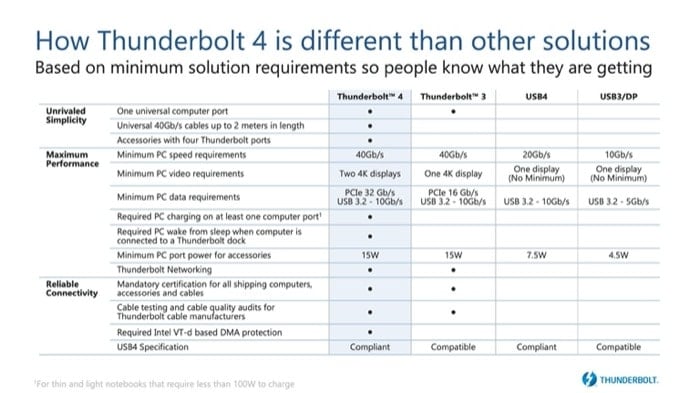 A few years back, Intel bestowed the Thunderbolt 3 specification to the Implementers Forum (USB-IF) — a non-profit responsible for maintaining, promoting, and supporting the USB standard — to push the adoption of Thunderbolt 3. By doing so, it made the Thunderbolt standard royalty fee, making it easier for anyone to make their Thunderbolt 3-compliant products. However, even though the standard is royalty-free, manufacturers are still required to get the certification from Intel to receive the Thunderbolt badge for their products.

With Thunderbolt 4, manufacturers who want to get their products certified, their products need to fulfill the following criteria (in addition to the four points mentioned above) –

1. PC charging on at least one computer port
2. Ability to wake up the computer by touching the keyboard/mouse when connected to a Thunderbolt dock
3. Intel’s VT-d direct memory access (DMA) protection to prevent the DMA attacks 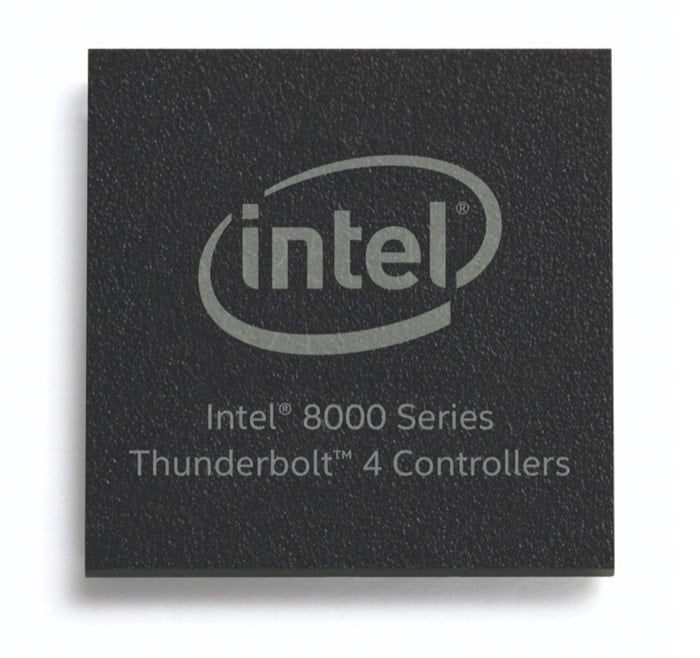 Besides, Intel has also announced the Thunderbolt 4 controller 8000 series, which will be compatible with existing Thunderbolt 3 computers and accessories. For computer manufacturers, it is offering the JHL8540 and JHL8340 host controllers, whereas, for the accessory maker, it has the JHL8440 device controller.

The first set of computers and accessories powered by the Thunderbolt 4 specification are expected to be available sometime later this year. Alongside these, Intel also suggests the latest lineup of laptops based on its ‘Project Athena’ program will also be available somewhere close to the same timeline. And its upcoming processors (Tiger-Lake) will be the first ones to integrate Thunderbolt 4. As for the controller 8000, Intel is expected to deliver them sometime later this year.

Was this article helpful?
YesNo
TechPP is supported by our audience. We may earn affiliate commissions from buying links on this site.
Read Next
How to Install and Use Intel Unison App on Windows, Android and iOS
#Intel #Thunderbolt #Thunderbolt 4