Wireless earphones are everywhere these days!

Depending on how much you are willing to spend, it has now become easier to find a pair of wireless earphones under different price brackets — thanks to a wide range of options available in the market. A big reason for this has to do with the growing competition among brands that pushes some of the bigger players in the space to price their products competitively. To add to that, there are also new and upcoming brands, which add to the competition by introducing fairly decent and compelling offerings for consumers on a budget. 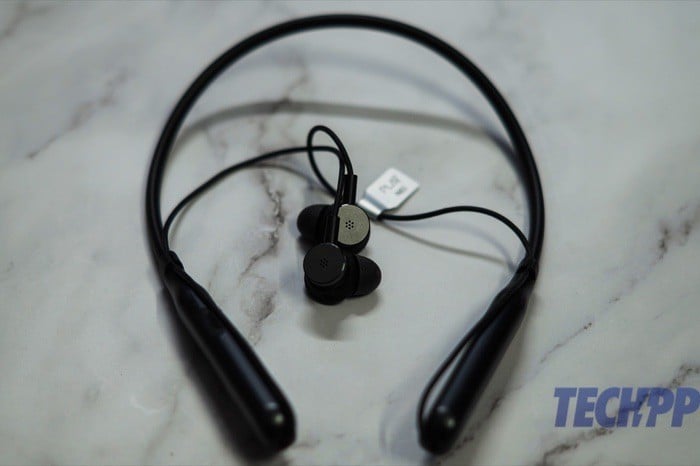 One such player in the tech space is World of Play — a smart wearable and audio accessory brand based in India, which recently introduced two new pair of wireless earphones: PlayGo N82 and PlayGo T20. Of the two offerings, while the latter is a pair of TWS earphones, the former are neckband-style wireless earphones with active noise cancelation (ANC) technology. We have been testing the PlayGo N82 for a couple of weeks now, and here’s our review of the same.

The PlayGo N82 are neckband-style wireless earphones, and at large, they look like any other neckband-style earphone in the market. However, it is the way they are constructed that differentiates them from the rest — both in a good and a bad way. 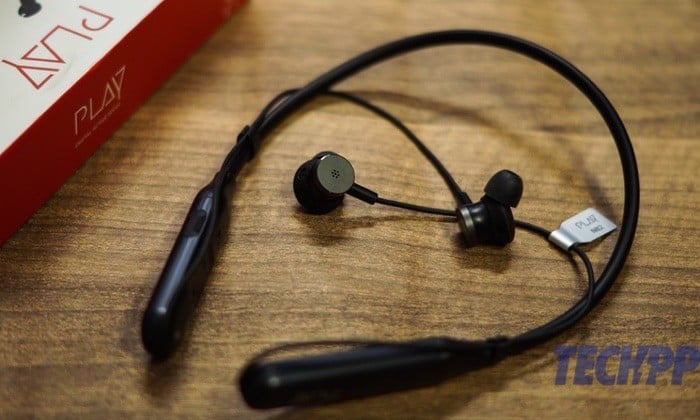 To start with, the earphones are built out of plastic and have a slightly textured (matte) surface. The cord that holds them together appears to be made from hard rubber. This cord further splits into two pits at the end of the neckband and emerges into the two earbuds. Compared to some of the other neckband-style earphones, the N82 does feel slightly on the heavier side. Although, despite that, it sits comfortably around the neck without causing any discomfort. To add to the convenience, the earphones have two tiny hooks on the neckband that you can use to run through the wires (connecting the earbuds) to shorten the length. If you plan to use these earphones while you work out, this little addition gives you a much better and convincing fit. Talking about which, you also get an IPX5 (splash) rating on the N82, which makes them fit to be used during workouts.

Moving right along, the quality of material used for the wires that emerge out of the neckband pits and connect to the earbuds feels substandard — to the point that you can relate it to what you often used to get on wired earphones back in the day. In oneness, not only does that take away from the premium experience, but it also makes the earbuds more prone to tangling. Needless to say, longevity is another alarming concern that can creep in with time. 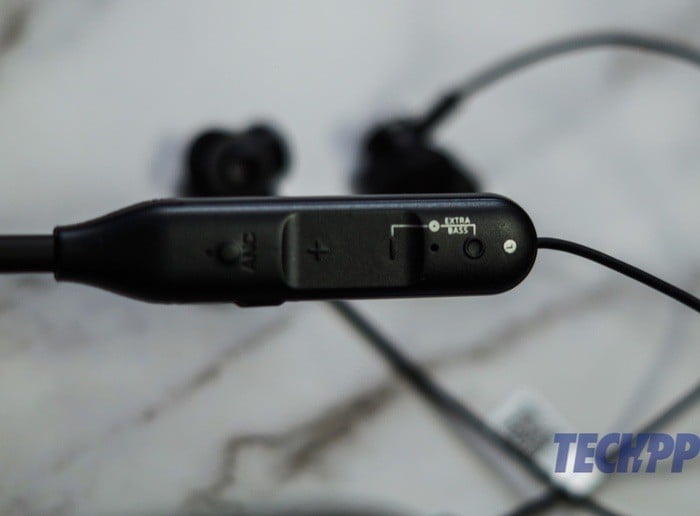 Talking about the earbuds, we really like the in-ear design approach that the company has taken with the PlayGo N82. The backside of the earbud has a metal finish, which is a nice touch and is something you find on some mid- or high-end earphones. Similarly, the in-ear part of the earbuds has a rubber cushioning on top, which we feel offers a good seal and ensures the buds do not fall off the ear easily — even during workouts. However, even though the fit (and the seal) feels secure and comfortable, the metal stem (part of the metal earbud design) does cause some discomfort when worn for a long time. As a result, you might find the need to adjust the earbuds a few times if you use them on a stretch. Besides, the earbuds come with magnets on their back, which helps them snap together in place, and in turn, prevents them from dangling around your neck.

A major gripe we have with the earphones is with regards to the poor implementation of the cover lid on the charging port. In our time testing them out, we found the process of removing the lid to be notably troublesome and time-consuming. 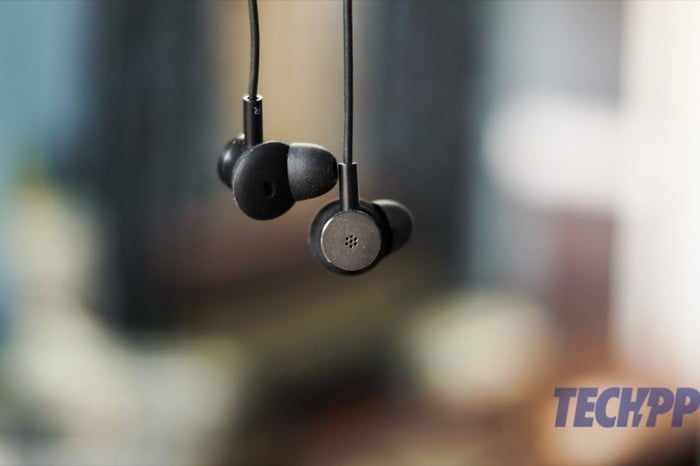 The PlayGo N82 wireless earphones utilize Bluetooth 5.0 for connectivity, which is a common sight on most wireless earphones these days. It enables the earphones to offer a pretty good range — that easily spans across a room without incurring any noticeable drop in signal or sound quality. When it comes to connection, despite the fact that there is no Google Fast Pair functionality, the earphones pair quickly, and the reconnection process is also smooth and quick. Similarly, during our testing, we did not observe any noticeable latency (audio-video sync issues) while watching content on some of the popular OTT platforms, including YouTube.

Talking about functionality, the N82 comes with in-line controls on the left pit (ending of the neckband). You get a total of four buttons: ANC, volume up/down, and multi-functionality button, all of which let you perform the associated functionalities accordingly. In our time with the earphones, we found the placement of the controls to be somewhat odd and inconvenient to use. And, it took us some time to get used to the arrangement before we could use it effortlessly. Well, kind of. For, the buttons on these earphones have a mushy feel to them and lack enough tactility. As a result, they require you to press hard on them a lot of times to trigger the action. What’s more, the lack of better tactility on these buttons fails to deliver feedback against your clicks, so you sometimes end up wondering if you actually managed to click on a button. Similarly, another problem we noticed with the earphones is that when you connect them to a computer (Mac or Windows), the volume levels are always shot up to 100%, which is straight-up annoying and terrifying. 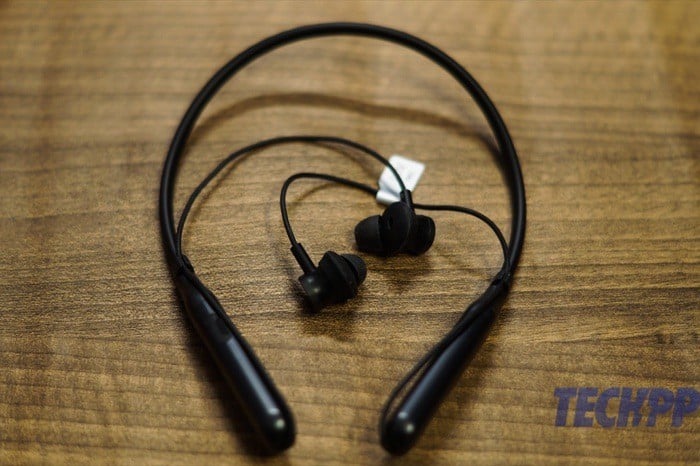 Moving to features, the PlayGo N82 comes with the bass enhancer (extra bass) mode, which is supposed to boost the bass to provide you with a more thumping sound. However, in our testing, we did not find the earphones to live up to any of the built-up expectations. Instead, we felt the mode brought down the overall sound quality of the earphones significantly. [More on this in the following section.] Aside from the extra bass mode, another hero feature (or the supposed USP) of the earphones is active noise cancelation (ANC), which is a rare sight and limited to very few offerings in the budget wireless earphones space.

Talking about the ANC implementation on the N82, we feel the ANC on these earphones is more of an insinuation than actual, real noise cancelation. To test it out, we used the earphones with both Android and iOS devices, and the ANC functionality could not manage to cut down on noise on either platform. Furthermore, even though ANC has a reputation of altering the sound quality on (some) earphones to a certain degree, in the case of PlayGo N82, that degree is far from “certain”. In our opinion, the ANC on these earphones does (more) bad to their overall performance than it does any good. For, the very first thing the feature hampers, as soon as you enable it, is the sound quality, which is a vital aspect of an audio accessory. [More on ANC impacting sound in the next section]. 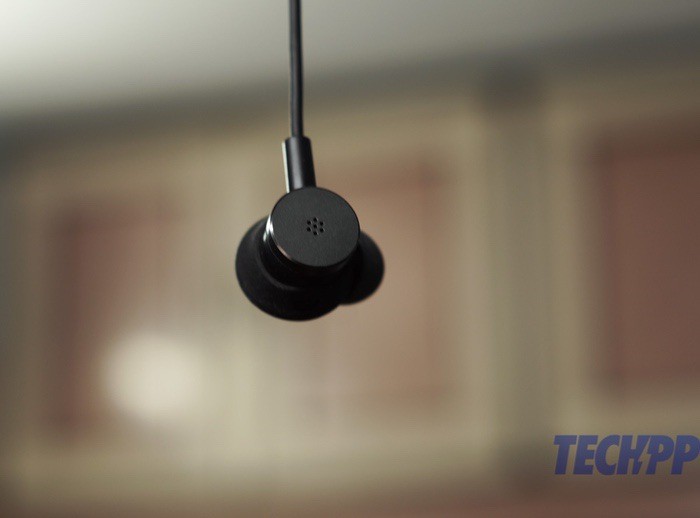 Lastly, even though the earphones come with magnets that help the earbuds snap together in place, they do not serve the auto- play or-pause functionality. And therefore, you have to resort to manual operation. What further takes away from the whole experience is that these earphones do not disconnect and turn off when you snap them together. Nor do they start when you unsnap them. So, unlike most wireless earphones that are ready to be paired and used as soon as you unsnap the earbuds, the N82 requires you to turn them on manually (using the multi-function key), which, honestly, feels like a dated experience.

Now, on to another crucial deterrent for some people, sound quality. The PlayGo N82 earphones exhibit a bass-heavy sound signature, which favors frequencies on the lower end of the spectrum. However, despite being on the bassier side, the thump is not very punchy and consistent. Rather, it is a hit-and-miss affair — the earphones produce an impressive attack in certain titles but fail to exhibit any of it in other tracks. Talking about other frequencies, since the earphones put an extra emphasis on lows, the mids and the highs get a bit overpowered and subdued, which makes them sound muddy. 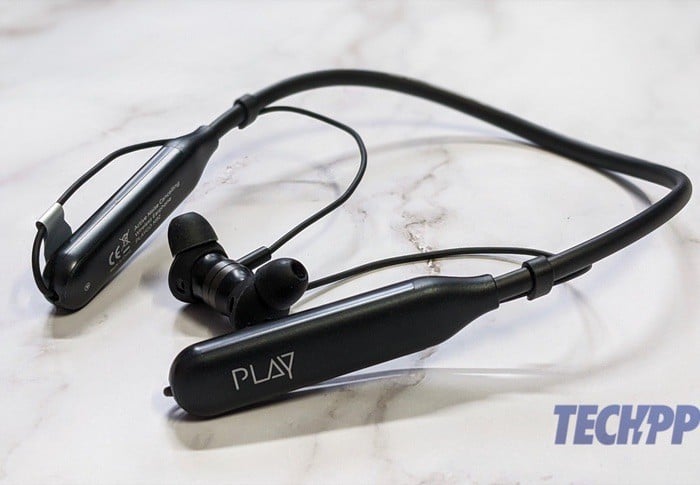 As such, all those characteristics leave the earphones with a congested sound stage — one that lacks enough depth and does not have a very clear and distinct instrument separation. As a reason, they do not manage to output the sound the way it is meant to by the creator. Further, talking about the bass augmentation feature, as already mentioned, it does not offer any noticeable flavor to the bass, and therefore, falls short of our expectations. You see, instead of adding that extra oomph factor to the sound, the feature suppresses other frequencies, along with the loudness, and adds a very subtle attack to offer a sense of enhanced bass.

Lastly, talking about using ANC while listening to music, we feel that the feature significantly hampers the sound quality on the N82 and makes them sound too shrill. In addition to failing to deliver on its primary objective diligently, the approach used here to implement ANC (and give a false sense of “noise cancelation”), makes the earphones sound (slightly) distorted and tinny at high volumes. And that makes it a big no-no feature to use on these earphones. 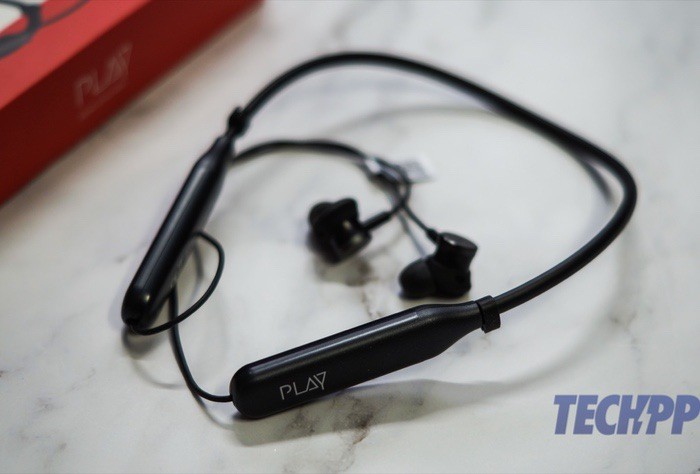 Call quality is another important criterion for some, especially those who take a lot of calls on their earphones. And in this department, the PlayGo N82 offers a satisfactory calling experience, with both parties able to hear the person speaking on the other end most of the time — except for certain instances when there was background noise, and the recipient did complain about the disturbances and lack of clarity.

The PlayGo N82 sports a 300mAh battery, which, as per the company’s claims, offers up to 16 hours of playback time. During our testing, which included listening to songs on a computer and mobile phone at around 50-70% volume, we could manage to get about 15 hours of playback time on a single charge without ANC and 13½ hours with ANC turned on.

In terms of charging, the earphones come with a micro-USB port, which is a bit of a disappointment with today’s standards and translates into slow charging speeds as well. On paper, the company suggests a charging time of around 2 hours for the N82. However, in reality, it took way longer to charge these earphones — 2 to 100% in a little over 3 hours. 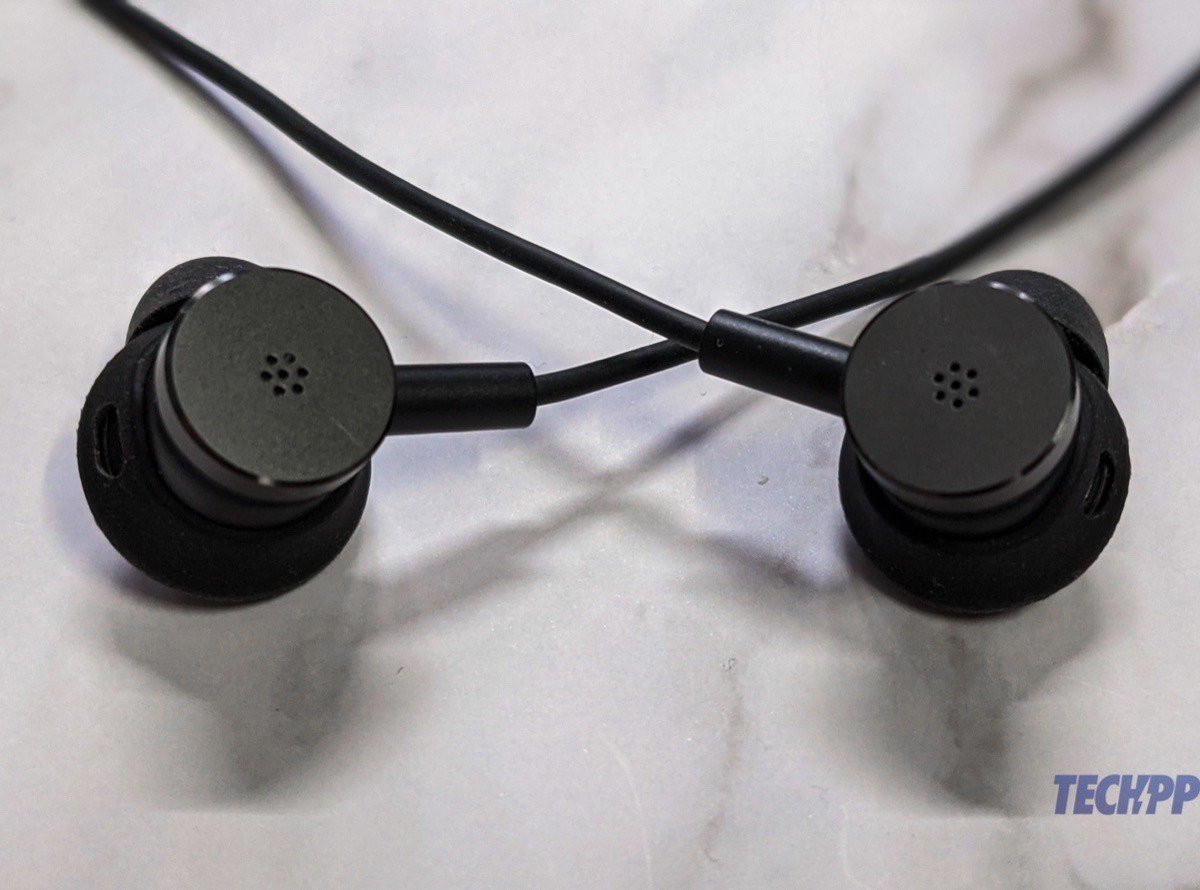 The PlayGo N82 wireless earphones carry a price tag of Rs 2,999. And for that price, you get a pair of decent-sounding earphones (with ANC off), an impressive battery life, and a good connection range. If you are like a majority of consumers, you might like the sound signature and the bass response that these earphones offer. But besides that, when you take into consideration the shortcomings we have put forth, there is not much to expect on these earphones. Even in terms of sound, if you are someone who prefers a slightly balanced sound signature, these earphones are not the right fit. And you should instead look towards a few other options in a similar price range like the OnePlus Bullets Wireless Z, the Oppo Enco W31, or the Realme Buds Wireless Pro, which are more attractive offerings with better value for money.

UPDATE: The review has been updated on December 30, 2020, based on the second review unit that PlayGo sent to us.

Review Overview
Was this article helpful?
YesNo
TechPP is supported by our audience. We may earn affiliate commissions from buying links on this site.
Read Next
Redmi A1 Review: Hitting the perfect Sasta, Sundar, Tikau note!
#audio #playgo n82 #review #Wireless Earphones