After having teased the launch of its new smartwatches numerous times leading up to the launch, Realme has today officially announced its S-series watches in India. Called the Realme Watch S and the Watch S Pro, both smartwatches feature a stainless steel design and come with a circular dial, making them the first Realme watches (in India) to have a circular dial. Here’s a closer at the specifications for these smartwatches. 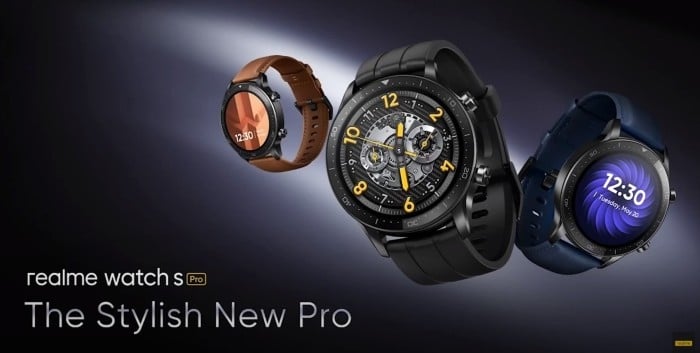 In terms of design, the Realme Watch S Pro features a circular dial with a 22mm lug width. It is built of stainless steel and has a polished finish on the front and a brushed finish on the sides. The watch offers up to 50 meters of water resistance. Upfront, there is a 1.39-inch display that comes in with a 454×454 pixel screen resolution at a pixel density of 326ppi. The display is always-on (AOD) type and features a 2.5D Corning Gorilla Glass on top.

The Watch S Pro utilizes Bluetooth 5.0 for connectivity and includes a 420mAh battery to power the internals. Realme suggests a battery life of 14 days on the watch (with heart rate monitor ON). Talking of which, the watch charges using a magnetic charging base that comes bundled with the box and promises a full charge in just 2 hours. It runs on a dual-core ARM-Cortex M4 processor. Aside from that, the Watch S Pro comes with a PPG sensor with support for 24-hour uninterrupted heart rate monitoring. As per the company, the watch detects heart rate every 5 minutes 24/7, and if the heart rate crosses the lower or upper threshold, it sends an alarm to notify you of the same. 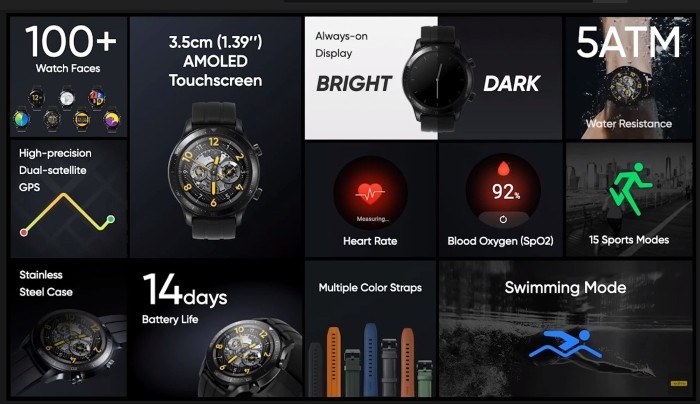 Similarly, there is also blood oxygen level detection on the Realme Watch S Pro, which claims to help you monitor your blood oxygen level at all times. As for fitness and activity, there is support for up to 15 kinds of sports monitoring modes like outdoor run, indoor run, cycling, hiking, swimming, yoga, etc., and the watch automatically identifies your walk and running to keep track of your step count. Lastly, the Watch S Pro includes dual-satellite GPS, which makes tracking outdoor activities such as running, jogging, walking, etc. possible, independent of the smartphone.

Talking about features, the watch connects to the Realme Link app to help you sync health data and make changes to its settings. In addition to that, it also offers smart notifications to deliver alerts for calls, SMS, third-party messages, and the likes.

The Realme Watch S comes with a 1.3-inch circular display with up to 600 nits of brightness, IP68 water resistance, and features heart rate and blood oxygen level monitoring. It includes a 390mAh battery that promises up to 15 days of usage on a single charge, with a 0 to 100% charge in just 2 hours. Besides, the smartwatch comes with 16 different sports modes and offers smart notifications and other features similar to the Watch S Pro. The Realme Watch S will also have a special edition, designed in collaboration with Korean pop cultural artist Grafflex and will be available in two designs: black & white and bold & colorful. 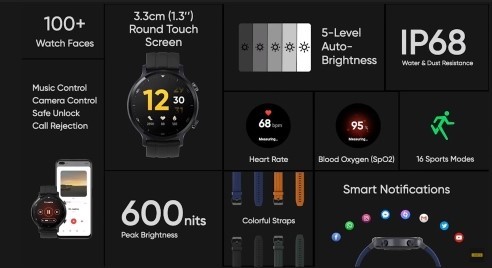 Alongside the two new smartwatches, Realme has also announced the Realme Buds Air Pro Master Edition, which carry a price tag of Rs 4,999 and will be available from January 8 on realme.com and Flipkart.

Was this article helpful?
YesNo
TechPP is supported by our audience. We may earn affiliate commissions from buying links on this site.
Read Next
Realme GT Neo 3T Review: An Easy Recommendation but Not at MRP
#Realme #realme watch s #realme watch s pro