Dell is undoubtedly one of the most sought-after brands in the Windows Laptop market, thanks to the solid reputation it has built over the years. Dell laptops are generally associated with top-notch hardware, top-notch security, good customer service, and one of the most important aspects of a computer, durability. For this reason, Dell’s products are not necessarily the most aggressively priced and are therefore aimed at specific target groups such as business people who are looking for a reliable and secure workhorse. 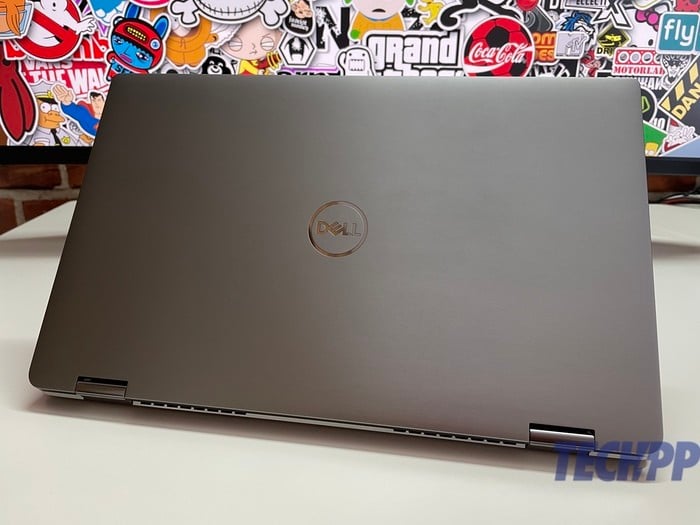 Dell’s Latitude series is a perfect fit for such requirements. Specifically, the Latitude 15 9510 2-in-1, which we have been using for a few weeks now, is built like a tank, has powerful innards, a wealth of AI features, and can also transform into a touchscreen tablet on the go. All this, however, comes at a hefty price tag of Rs. 2,10,000. Is it worth spending money on the Dell Latitude 15 9510 2-in-1 when there are much cheaper options from other brands with the same specs? Let’s find out.

The Dell Latitude 9510 features an all-metal chassis with a brushed aluminum finish on both the lid and the keyboard deck. The notebook feels solid and sturdy when you hold it in your hand and almost feels like one giant slab of metal. It’s one of the highest-quality notebooks we’ve seen, but all that metal also means that the Latitude 9510 isn’t the lightest notebook on the market. The trim around the notebook has a polished, beveled look that can be easily scratched with daily use. 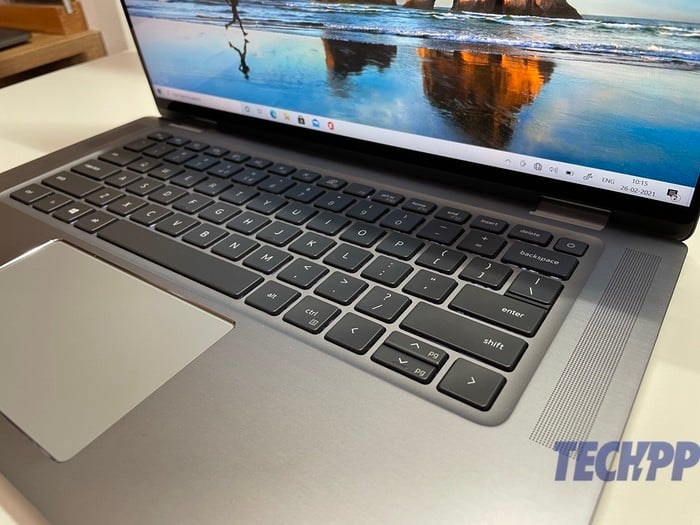 As a 2-in-1 convertible, the Latitude 9510 has a hinge that allows the display to rotate 360 degrees and turn into a tablet. While the hinge is smooth, it doesn’t feel very reassuring or stable, as there are some creaking noises and loose movement when you apply pressure to one of the hinge caps on our device. Although we’re not sure if Dell is aiming for the thin and light category with the Latitude 9510, it feels pretty slim and compact for a 15-inch device. As mentioned, however, it’s not the lightest notebook on the market and will certainly make its presence felt in your backpack.

The Dell Latitude 9510 follows Dell’s signature design language, which means you get a laptop that looks clean and minimalist. The top lid has Dell branding in the middle and the inner part has no kind of branding other than the Intel sticker indicating which processor is used inside. The laptop feels wider horizontally than most traditional laptops, giving the impression that the display might be a 21:9 panel. However, that’s not the case and the display itself is a traditional 16:9 panel, but because the edges are so narrow, the chassis feels stretched. 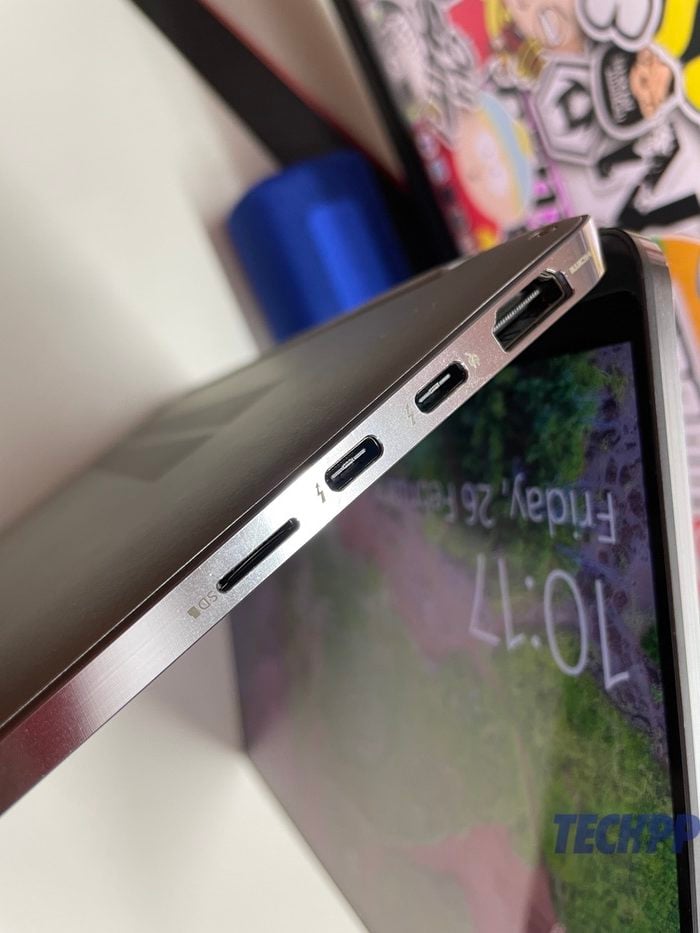 The Dell Latitude 9510 has a nice spread-out keyboard with no number pad. The keyboard is backlit and the typing feel is great. The feedback is excellent and the key travel is just big enough that most people will enjoy typing. Not only the keyboard but the trackpad on the Latitude 9510 feels great and is one of the best trackpads we’ve used on a Windows notebook. It’s smooth, the click mechanism is very satisfying, and all the gestures work as they should. We wish the trackpad dimensions were a bit wider, but we’re just nitpicking at this point.

The keyboard deck doesn’t show any give, even under heavier pressure. On both sides of the keyboard, we have front-firing speaker grilles that sound excellent and can get really loud. This type of implementation for speaker output is one of the best for laptops but is unfortunately rarely seen as manufacturers tend to opt for down-firing speakers to save space for other components. If media consumption is high on your priority list, the Latitude 9510 certainly won’t disappoint. 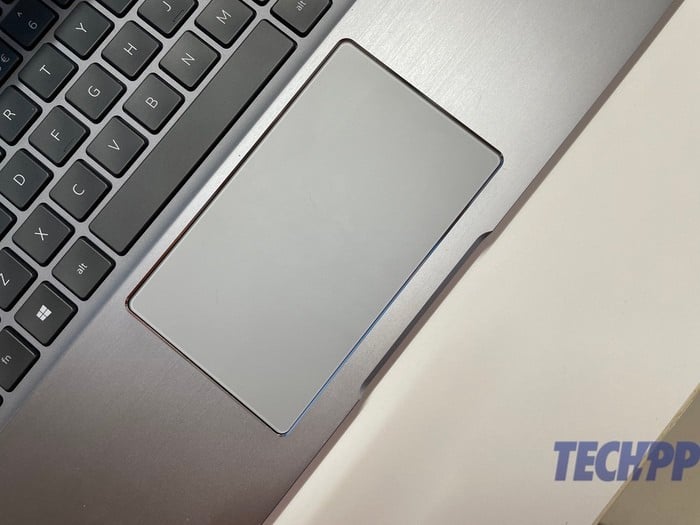 Let’s now turn to the Latitude 9510’s ports. The left side houses two USB-C Thunderbolt 3 ports with USB-PD, as well as a full-size HDMI port and a micro-SD card slot. The right side houses a USB 3.2 Type-A port along with a 3.5mm combo jack and a Kensington lock. The thin bezel on the top houses a webcam good enough for video conferencing. It is also impressive that Dell has managed to fit the additional IR sensors needed for Windows Hello next to the webcam in such a small frame.

If you record audio with your laptop or are involved in a lot of audio or video conferencing, the Latitude 9510 has an array of four microphones that are used for noise cancellation, allowing for better audio recording compared to a traditional microphone input. 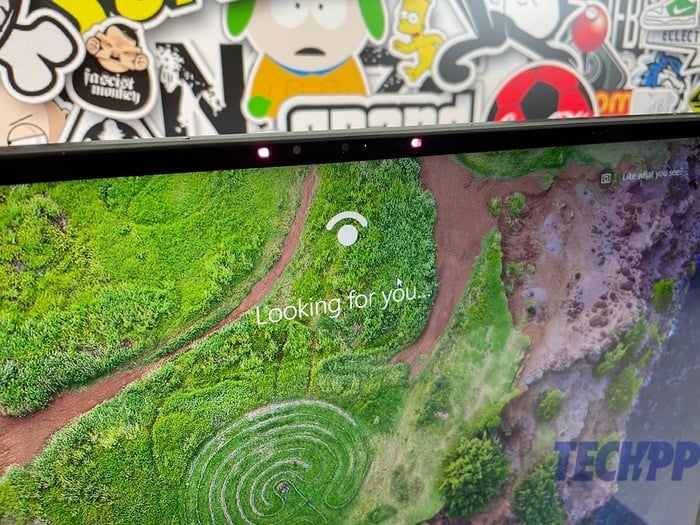 The Dell Latitude 9510 comes in two variants – with and without a rotating display, or simply put, a regular notebook and an optional 2-in-1 variant. The model we were sent for review is the 2-in-1 variant, which has a 1080p display that spans 15 inches diagonally and can reach a peak brightness of 400 nits. Being a 2-in-1, the display is a touchscreen panel. The viewing experience on the Latitude 9510 is excellent, thanks to both the quality of the panel used and the fact that the edges around the display are some of the narrowest we’ve seen on a notebook.

The display gets sufficiently bright even in well-lit environments, but the glossy surface means that if you point a light source at the display, the reflections can be distracting. Also, the colors on the display aren’t as saturated as we’d like, but that doesn’t mean watching content isn’t a good experience. Whether you’re watching movies/shows or even editing photos and videos, the Latitude 9510’s display does a good job. Combined with the front-facing speakers and nearly bezel-less display, consuming content on the Latitude 9510 offers a completely immersive experience. 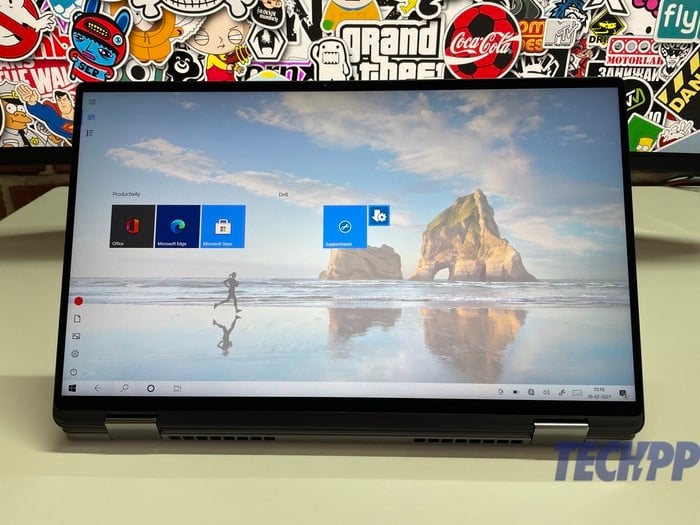 Our variant of the Dell Latitude 2-in-1 comes with the 10th Generation Intel Core i7-10810U chip, which has 6 cores that can reach a maximum frequency of 4.9GHz. Unfortunately, the Latitude 9510 doesn’t get discrete graphics as the primary target audience is not gamers/content creators. Therefore, you have to make do with Intel UHD graphics. Windows 10 Pro is pre-installed and the variant we received has 16 GB of DDR3 memory with 2133 MHz as well as a 512 GB M.2 NVMe drive.

Specs and numbers aside, the Latitude 9510 is a workhorse and doesn’t break a sweat even during demanding CPU -intensive tasks. In fact, we were surprised at how well the notebook handled editing video in 4K, especially considering it’s not a notebook for editing photos or video. Considering the smooth video editing experience, it’s safe to say that any kind of task involving CPU can be handled well by the Latitude 9510. If most of your work involves using Microsoft’s Office Suite, browsing, consuming media, multitasking between multiple apps and desktops, or even programming, then the Dell Latitude 9510 is for you. 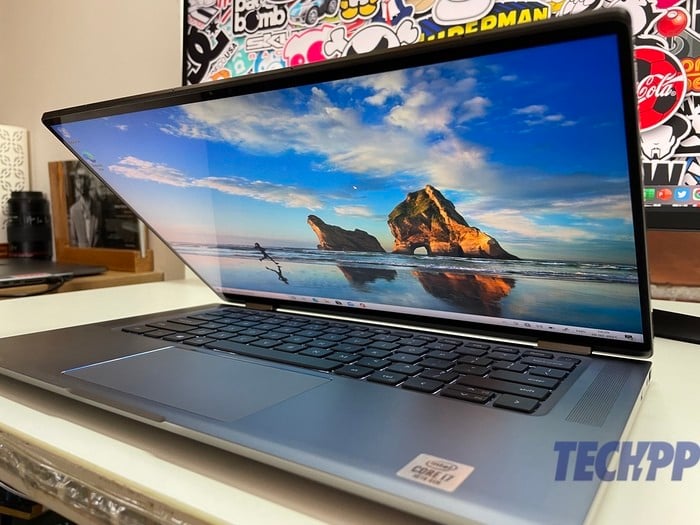 The notebook’s thermals were also handled well, and even in tablet mode, the Latitude 9510 didn’t feel uncomfortable or too hot, nor did it show any signs of throttling. In addition to solid raw performance, the Latitude 9510 offers a number of smart AI features that make it stand out compared to other notebooks with similar specs.

Some of these include ExpressResponse, which helps you launch your frequently used apps faster, ExpressSign-in, which helps you boot and get into your computer faster, ExpressCharge, which learns your battery usage and charging patterns and speeds up charging accordingly, and a few other AI tweaks that improve your experience while using the laptop by learning your usage patterns and optimizing apps accordingly.

A battery that never dies 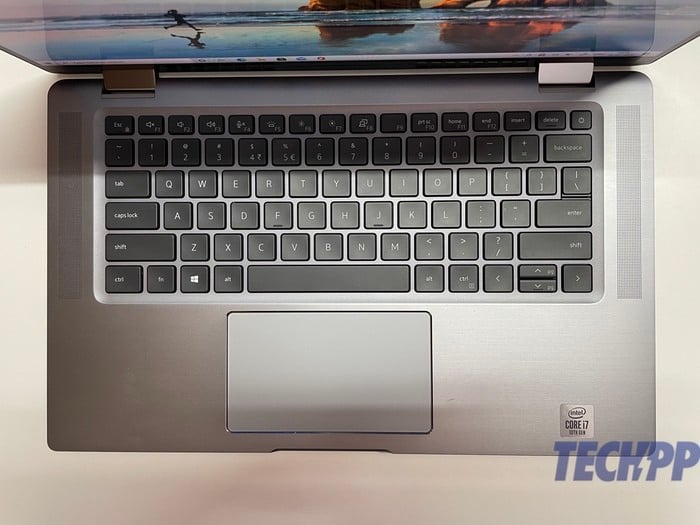 The best feature of the Dell Latitude 9510, in our opinion, is the battery life. This laptop just won’t die, especially when used for light tasks like surfing the web and typing documents. On each day we used it, we ended the day with about 30% battery level and about 12 hours of use. This means that if you drain the battery completely, you can easily expect more than 15 hours of use from the Latitude 9510, which is excellent.

If you’re always on the go or your work involves being away from a power outlet for extended periods of time, the Latitude 9510 won’t let you down once. Also, the laptop supports ExpressCharge, which means you can get to about 80% in an hour, which is enough for the whole day. Since the laptop charges via USB-C and not a proprietary port, you won’t have any trouble finding a charger even if you forget to bring the one that came with the laptop.

The Dell Latitude 9510 seems like a perfect all-rounder… But, should you buy it? 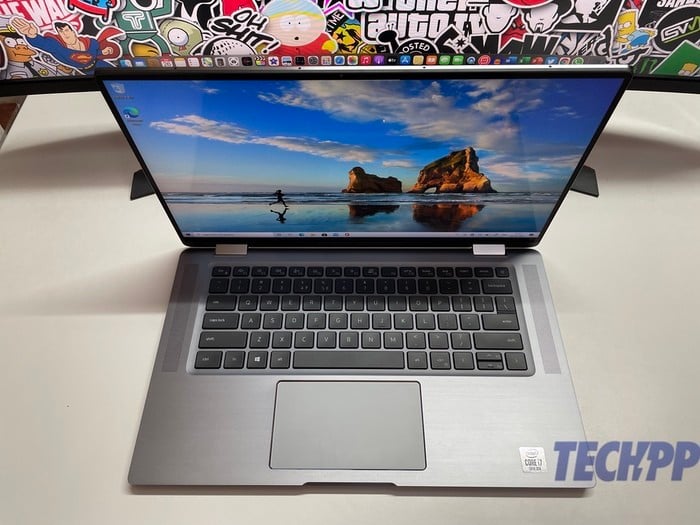 As we said in the beginning, premium products come at a price, and the price for this device at the time of writing this review is Rs. 2,09,611. Note that this price is for the specific variant that we have. If you opt for a non-convertible variant and an i5 chip, the starting price is around Rs. 1,49,000. The most common and logical argument is that most of the features, if not all, that the Latitude 9510 offers are available on laptops that cost less than half the price of this one.

However, it’s important to note that the Latitude series laptops aren’t really aimed at the average consumer. It is mainly aimed at corporate, business, and government workers for whom a reliable and secure device that gets the job done without failures is a key requirement, and that can’t really be quantified.

Does that mean it’s worth paying over 2 lakhs for the Latitude 9510? It might not be for you. There are several options from Dell itself that offer better value outside of the Latitude series. But if you are in the target audience for this product and are looking for a device that you know will last a long, long time and won’t break down even with sustained use, then the Dell Latitude 9510 offers a great experience that is sure to meet your expectations.

Review Overview
Was this article helpful?
YesNo
TechPP is supported by our audience. We may earn affiliate commissions from buying links on this site.
Read Next
Skullcandy Mod Review: Betting on doing the basics well
#dell #Dell Latitude 15 9510 #review #Windows 10