Almost perfect, except for price

TWS headphones come in all shapes and sizes. Some even offer unique features to stand out from the competition in an increasingly competitive TWS market.

LG is one of the few brands known to do this well. The TONE Free series UV earbuds feature the UVnano charging station, which claims to kill 99.9% of bacteria on the earbuds while they’re charging to keep them clean. In addition, these earphones feature Meridian-tuned sound that further sets them apart from competitors in their price range. 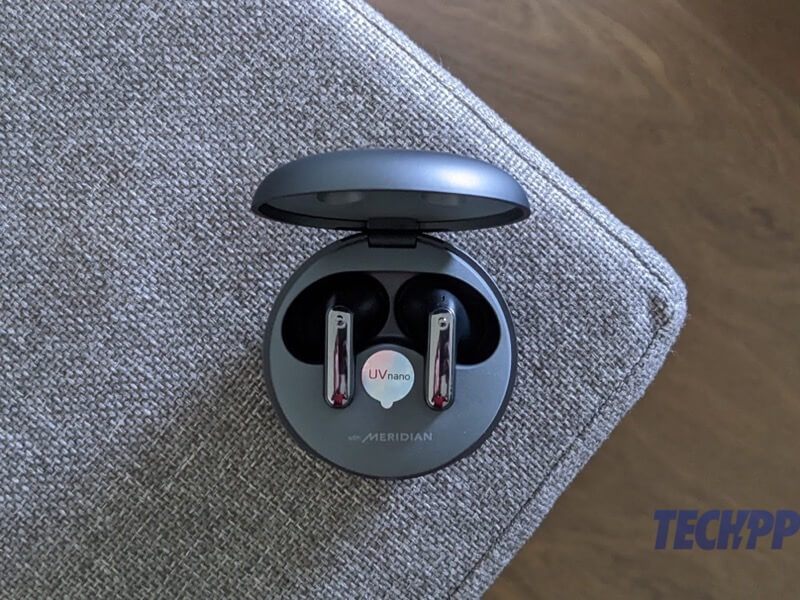 With its newest pair of earphones, the LG TONE Free FP9, LG, is trying to outdo its predecessor, the TONE Free FN7. The new earphones are equipped with UVnano cleaning, ANC, and a brand new feature, Plug, and Wireless, which allows you to listen to music on non-Bluetooth devices.

But are these features worth the 16,900 rupee price tag? Read on to find out what’s good and bad about the earbuds in our LG TONE Free FP9 review.

At first glance, LG’s latest TONE Free FP9 earbuds look identical to their predecessor, the TONE Free FN7. Except, they include a few minor changes to the design for the better.

For starters, the earbuds still sit in a miniature hockey-style puck case and have a TONE branding on top, as their predecessor. But this time, the charging cradle is slightly bigger than before, and the case now comes in a matte finish that makes handling it easier and prevents scratches and smudges. Additionally, there’s the addition of an all-new toggle button on the left side of the case for what LG calls the Plug and Wireless mode. More on this in the later section. 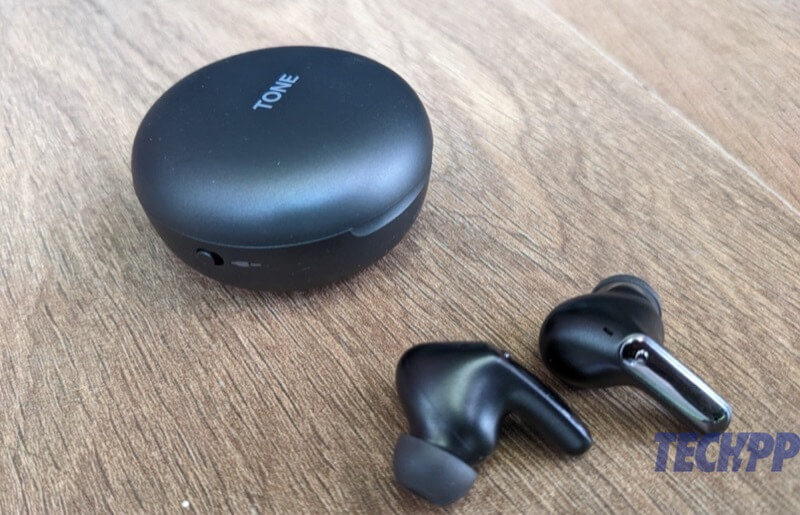 Aside from these changes, the rest of the characteristics of the FP9’s case are pretty much the same. Upfront, you get two LEDs sitting right below the opening lid: one at the top for battery indication and the other below it to indicate the UV cleaning status. Then, you get a nice divot on the front of the case that makes opening and closing the case lid easier. Its hinge mechanism—located at the back—also feels sturdy and doesn’t flinch. And on the back of the case, there’s a USB-C port, which doubles as a port for charging, and the all-new Plug and Wireless mode.

Opening the case of the TONE Free FP9 reveals the earbuds themselves, snugly seated in the hollow space and secured firmly through magnets. The earbud design is another factor that makes the FP9 different from its predecessor. In our opinion, LG has made the stem on these earbuds slightly shorter this time around, which looks quite subtle when worn. In addition, their shape is also slightly tweaked to offer a better fit in the ear. LG has extended the matte-finish treatment on its case to the earbuds too, which, besides looking good, also keeps the earbuds from falling off the ear.

On the outside, however, the earbuds sport a glossy surface along the stem, which gives them a premium appearance. It’s marked by a small bump at the top of the stem to help identify where the touch controls are located. That way, it’s easier to reach the touch control area while having the earbuds inside your ears.

Talking about comfort and fit, the TONE Free FP9 fit snugly in the ear canal and are comfortable to wear even for long listening sessions. During our time with these earbuds, we used them during workouts and outdoor runs, and on no occasion did we find them falling off the ear. Additionally, since these earbuds are IPX4 rated, they can withstand occasional splashes, which make them a great daily companion. 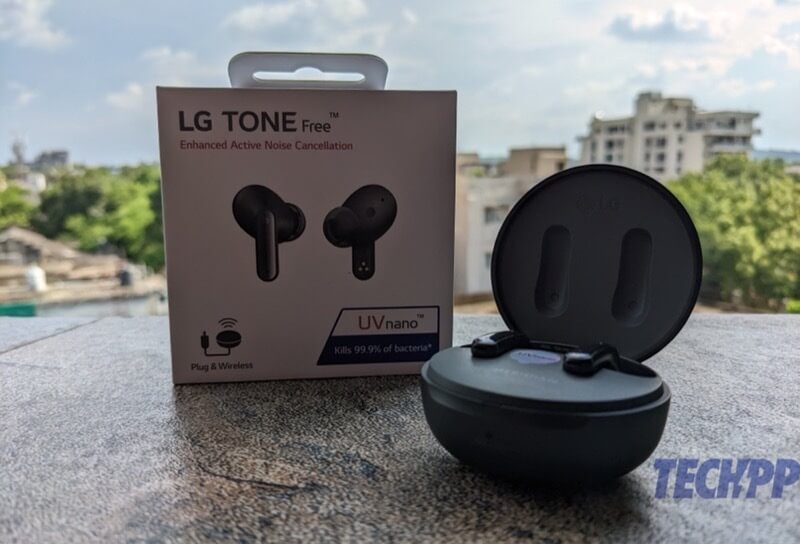 LG’s TONE Free FP9 earbuds use Bluetooth v5.2 for connectivity. As such, the latency on these is very low, and the connection is rock solid. They pair instantly with both Android and iPhone, and we didn’t encounter any connectivity issues during our time with the earbuds. If you’re on Android, you can even use Google’s Fast Pair Service to instantly pair them to your device.

Similarly, the range on the FP9 is impressive too. Audio-video synchronization is quite good on the earbuds on Android and iOS, and there’s no noticeable latency whatsoever, making them perfect for content consumption. Wear-detection is also on point here and works flawlessly.

When it comes to interacting with the earbuds, LG has added touch controls on the TONE Free FP9’s stem, which simplifies accessing its different features and functions. These controls are categorized into three types: one-touch, two-touch, and three-touch, and you can perform them on the touchpad of each earbud. 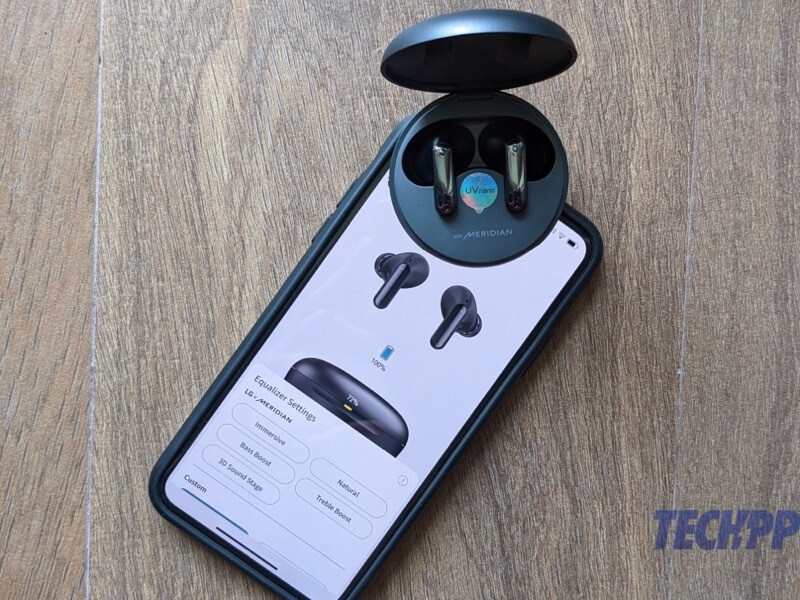 Actions associated with these gestures can be found inside the TONE Free app. If you want, you can even customize them to your preference. Additionally, LG also lets you lock the touchpad from the app, which disables it when it’s not in use to prevent accidental triggers.

Aside from these operations, the TONE Free app also lets you do a bunch of other things. You can, for instance, select an EQ setting from a few different presets (created by Meridian) in the app and, if required, create your own EQ using the 8-band EQ.

If you keep misplacing your earbuds often, then there’s the Find my Earbuds feature on the app that helps you locate your misplaced earbuds by playing a chirping sound. We used this feature on a couple of occasions, and it worked perfectly. Similarly, you can enable the Notification Readout feature on the earbuds, too, which reads all the incoming notifications on your device out loud, so you don’t miss any important notifications. And last but not least, the companion app also comes in handy when you want to update your earbud’s firmware to the latest version. 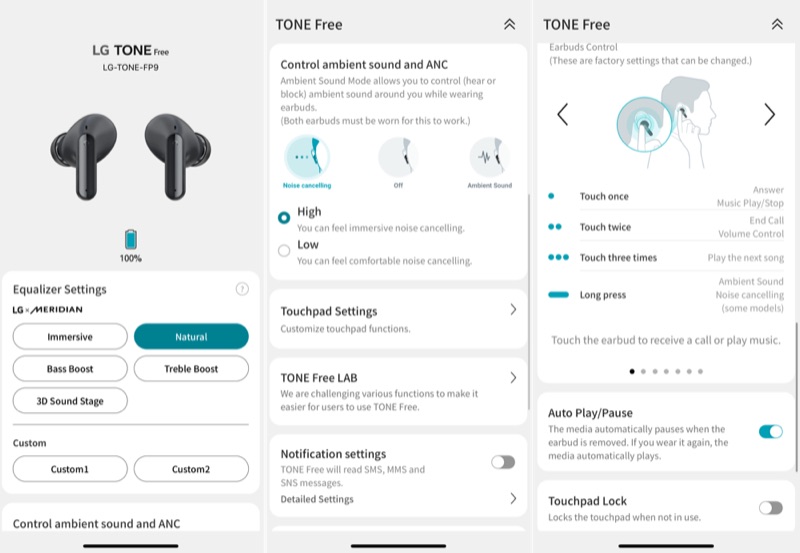 Moving to the biggest highlights of the LG TONE Free FP9—ANC and Ambient Sound mode—we’re really impressed with both these features on the earbuds. With ANC, you get two settings: High and Low. So depending on your preference, you can pick any setting between the two by long-pressing on the earbud stem or accessing the appropriate option inside the TONE Free app.

We really like that the ANC on the TONE Free FP9 doesn’t impact their audio quality, as can be seen on many TWS earbuds, so you won’t have to compromise between ANC or sound quality on them.

Lastly, there’s the Plug and Wireless mode. As we mentioned earlier, this mode lets you connect your TONE Free FP9 earbuds to any non-Bluetooth device so you can listen to music on them. Using it requires using the bundled USB-C to AUX cable to connect your earbuds with a non-Bluetooth device and toggle the Plug and Wireless switch on the earbud’s case. After which, you can easily stream audio to your earbuds. 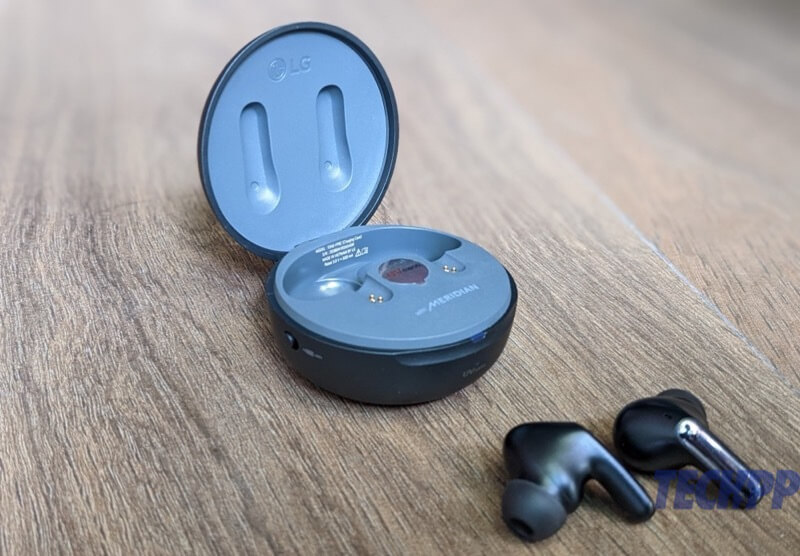 LG continues to foster its partnership with Meridian Audio for audio tuning of its earbuds, and the TONE Free FP9 are the latest pair of earbuds to benefit from the same.

On the inside, each earbud features an 8mm driver. While this may come across as slightly smaller than some of the other TWS offerings in its price range, the difference in size doesn’t seem to impact the sound significantly.

We feel this could likely be due to Meridian’s tuning, which has a reputation for offering high-quality (and natural) audio on its devices. And as such, we feel the company has managed to do justice to its reputation with the TONR Free FP9 to a great extent. The FP9 come with a neutral sound signature, which ensures the mids and highs are reproduced clearly and distinctly. In addition, LG also ensures that the audio is replicated as accurately as possible. 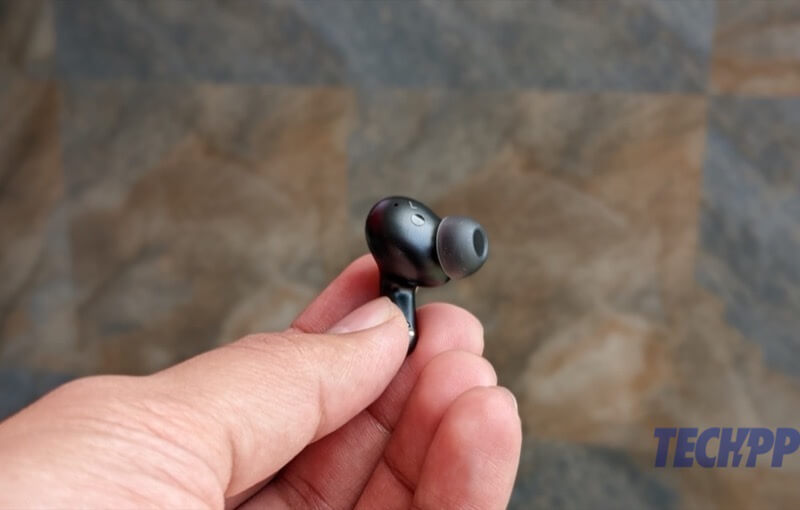 However, being neutral doesn’t mean that these earphones lack bass. There’s plenty of bass, but you shouldn’t expect it to be as boomy as some bass-driven earphones. Of course, this can be changed to some degree; for those who’d like more bass, the Bass Boost preset in the TONE Free app can spice things up.

Speaking of presets, you get a few of them inside the TONE Free app, like Immersive and 3D Sound Stage, that you can use. In addition, LG also gives you two custom presets to personalize audio to your preference when required. We like that the presets work as stated, which is rare with many earphones.

When it comes to highs, the earbuds manage to reproduce them decently well, in our opinion. However, we feel that had the highs been slightly more pronounced, the listening experience would have been a little better. In terms of vocals, the TONE Free FP9 are very clear, and this makes them a good choice for listening to vocal-rich songs. The same goes for instrument separation too, and so, if you’re a rock, pop, or metal fan, you’ll surely have a great listening experience on these earbuds.

However, there is one complaint we have about the FP9. The earphones only support SBC and AAC audio codecs, which is a bit disappointing considering the price. We would have liked them to support aptX or LDAC as well. 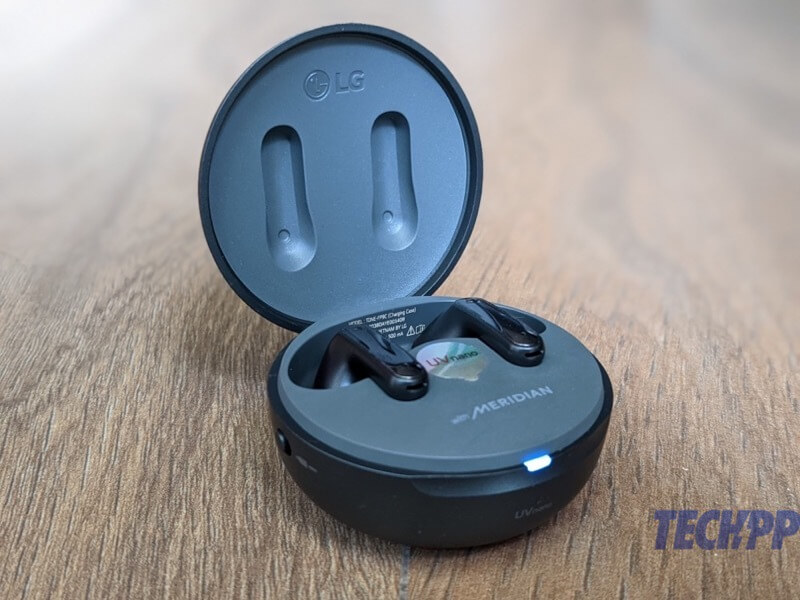 The LG TONE Free FP9 have three microphones on each earphone: two of them are on the outside, and the third is on the inside. Two of these microphones are responsible for suppressing ambient noise, while one is reserved for recording voices.

During our time with the earbuds, using them for calls on both an iPhone and Android device, the call quality with these earbuds was excellent, and we never received any negative feedback from the other person on the call. Unfortunately, the noise isolation isn’t that good. So if you often have to make calls in noisy environments, you may not have the best calling experience with these earbuds. 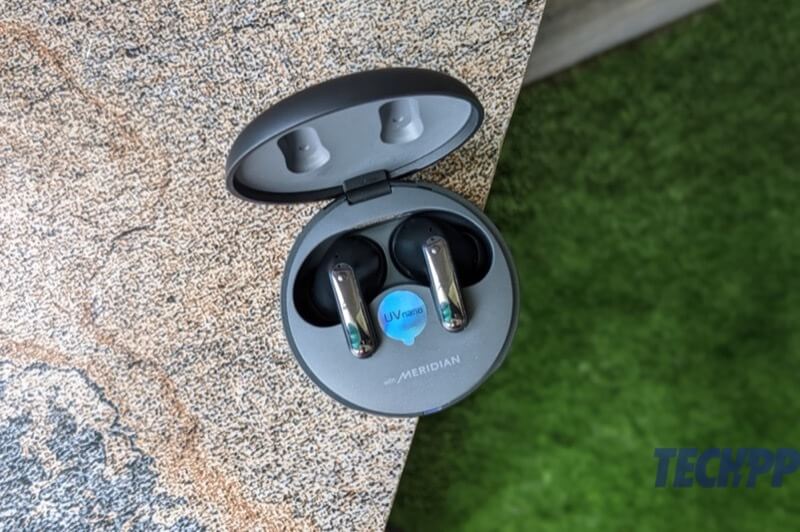 LG packs a 68 mAh battery inside each earbud on the TONE Free FP9 and a 390 mAh one on the charging case. According to the company, this should offer 15 hours of listening time with ANC and 24 hours without ANC.

In our test, the earbuds lasted almost 15 hours with a single charge. We listened to music, took calls, and turned the ANC on and off several times during this time.

Speaking of charging: The TONE Free FP9 take about 2 hours to fully charge, which is according to the company’s claims. 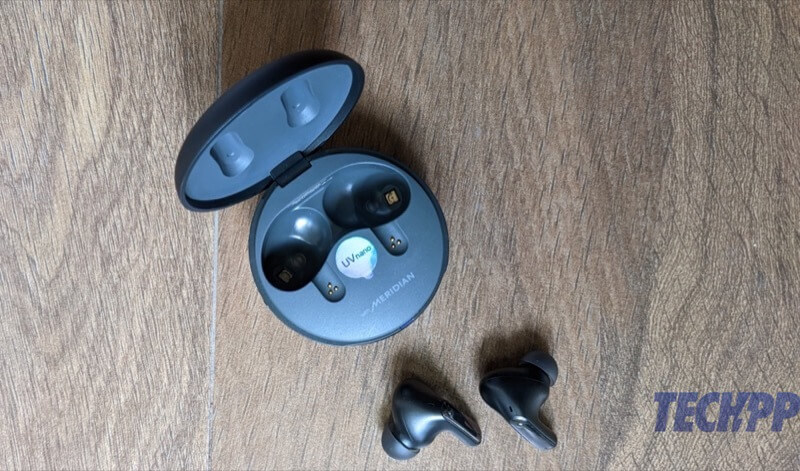 With a price tag of Rs 16,990 (USD 127), the LG TONE Free FP9 is certainly very expensive. They compete with Apple, Sony, and Jabra headphones and face stiff competition from Sony’s WF-1000XM3 and the Samsung Galaxy Buds Pro, both of which offer well-rounded performance for their price. The Samsung Buds Pro are relatively inexpensive, but they are considered the best value in their price range.

However, the TONE Free FP9 packs some unique features like UV cleaning, Plug and Wireless, and Whispering Mode, which give them an edge over other TWS earbuds on the market. Not to mention, they sound great, provide effective noise cancelation, and offer a decent battery life, all of which kind of justify the asking price. Still, whether you should buy these or pick something else is totally dependent on your requirements.

If you’re up for a pair of TWS earbuds that sounds good, has good noise cancelation, and throws a bunch of fancy features, you can definitely consider buying the LG TONE Free FP9. Else, if all you need is good audio, a neat calling experience, and a long-lasting battery, the Sony WF-1000XM3 or Jabra Elite 85t are better options.