Update (Sep 2012): What Apple released last year was named iPhone 4S. We expect them to release iPhone 5 (or just the new iPhone?) this year. Here is the guide to follow & watch iPhone 5 Event Online.

The rumor about Apple holding a media event on October 4th is indeed true. Apple has just started to send out media invites which says “Let’s talk about iPhone” which is a clear indication that the event will be about iPhone and we are now almost certain about iPhone 5 release on Tuesday, October 4th 2011. 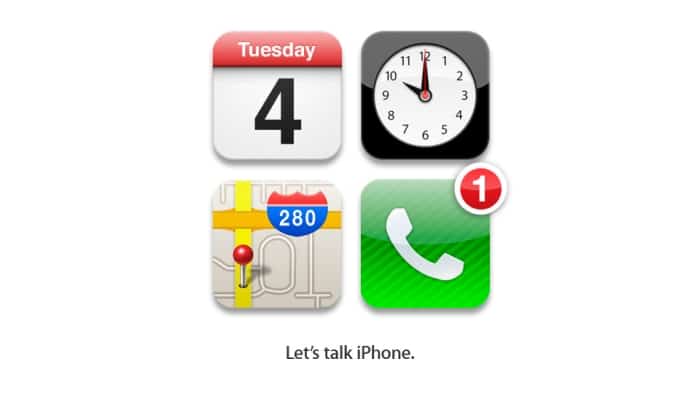 Surprisingly, this iPhone 5 event will be held within the Apple campus at Cupertino, unlike before when they used to have it at Yerba Buena Center for Arts Theater in San Francisco. This is probably because Apple had expanded its current campus at Cupertino recently.

If you carefully observe the invite, the calendar icon indicates the date (4th October) of the event, while the clock indicates the start time (10 am PST), the maps icon shows the place, and then the phone icon might possibly be linked with the tagline “Let’s talk iPhone” which might be referring to the iPhone Assistant feature, which should blow off our minds!

There are some rumors about two models of iPhone being announced on October 4th – an iPhone 5 and an iPhone 4S. It does make sense that Apple is trying to reach out to as many people as possible and this is their best chance to neutralize Android’s advantage of availability under different price ranges.

Historically Apple has tried its best to avoid live streaming of its product launches and developer events on the web (notice the * in the title?!). But they did surprise us all when they live-streamed the iPod music event last year. So, there is a glimmer of hope that Apple might pleasantly surprise us all over again for this iPhone 5 event. If at all they decide to live stream the iPhone 5 event, it should be available below.

We will surely be updating this post if we get to know any official or unofficial links to watch the event live. Note that for official webcast, Apple restricts the live stream to those using a Mac running Safari on Mac OS X, an iPhone or iPod touch running iOS 3.0 or higher, or an iPad!

Other possible live streaming links – Twit Live TV and LiveTechEvents, though the chances are slim.

Update 1: 9to5Mac reports that Apple won’t be live streaming the iPhone 5 event on Tuesday. They quote Apple’s PR for this sad news, but I know many of you will still be hoping for the best.

Update 2: Here is an unofficial live streaming link for the iPhone 5 event which, in all possibilities, is fake. In any case, keep a watch on it. We never know!

The start times as per different timezones-

A safer bet to follow the iPhone 5 event has to be these live blogging links from popular blogs that have got the invites.

Was this article helpful?
YesNo
TechPP is supported by our audience. We may earn affiliate commissions from buying links on this site.
#apple event #Apple iPhone 5 #iphone 5 #iPhone 5 Event #iPhone5 #live streaming links