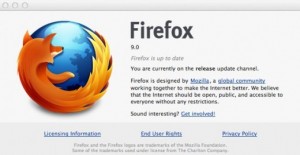 Update: Firefox 9 is now officially released. You can check for the update within the browser or read below to manually download.

Firefox 9 will be released officially anytime now, but for the impatient souls like me, Mozilla has made available the final version of Firefox 9 on their FTP servers.

As with Firefox 7 & Firefox 8, there are no notable changes to the user interface. The onus is on the performance this time around. There is a new feature called “type inference” added by Mozilla which helps Firefox choose how to handle JavaScript and hence doesn’t require a developer to define a variable. This new feature has resulted in boosting the performance of Firefox by 20-30%.

The beauty of type inference will be seen while using JavaScript heavy sites like Facebook, Google+ & GMail. Personally, I’ve preferred Google Chrome (even with its memory management issues) for its superior JavaScript performance. With type inference, Firefox surely has made me think about going back to Firefox as my primary browser.

Another major improvement in Firefox 9 is the addition of “two finger swipe navigation” in Mac OS X Lion. Also the theme integration for Mac OS X has been improved. Check the change log below

[via] TNW
Was this article helpful?
YesNo
TechPP is supported by our audience. We may earn affiliate commissions from buying links on this site.