There are famous games, there are legendary games, and THEN there are games like ‘Baldur’s Gate’. Based on the Dungeons and Dragons rules, this party-based role-playing game (RPG) was originally released in 1998 on the PC and is considered one of the greatest titles of all time, as well as the inspiration behind subsequent cult titles like Neverwinter Nights. So you imagine the sheer thrill that ran through gaming city when it was revealed that Baldur’s Gate was returning. No, not for a third innings, but in a revamped avatar, especially designed for the iPad, encompassing the first two titles of the series Baldur’s Gate, and Baldur’s Gate: Tales of the Sword Coast. 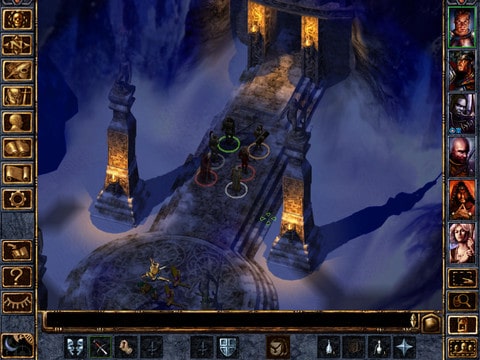 We have to warn you that it is neither pint-sized nor cheap. It is over a gigabyte to download and is priced just a cent short of a tenner in US Dollars. But if you have played the original in the nineties, you will be hard-pressed to keep sentimental tears from running when the app launches and the familiar (now iconic) tune plays. And yes, of course, the crashing sound that will follow will be that of veteran gamers’ jaws hitting the floor as they see that the game – the whole darned game – has been rendered perfectly for the iPad. Yes, you have the same top down view but you can pinch to zoom in and see the halls, battlefields, deserts, forests, and a whole lot else in detail. Mind you, we would not recommend zooming in all the time, as this is an older game and a certain amount of pixelation does set in.

The story is the same, and frankly now has got into yawn territory. Medieval word of sorcery and magic and knights and knaves. Evil to be defeated. By you and your band of companions, hailing from different races, each with its own distinct strength and weakness. What, however, made Baldur’s Gate rock was the sheer variety of solutions and options that you had at your disposal. You customise characters, participate in conversations, upgrade different skills, and of course, take part in some really crazy and wide-ranging battles, each of which you can take a different approach to (go once with lots of magic, or maybe just use brute force, or mix up both, or…). Those well versed with the Dungeons and Dragons world would be right at home here, while those accustomed to the more click-to-kill directness of Diablo might find it all a tad overwhelming – the inventories, the detailed quests, the stories within stories, the loot…this is EPIC on an epic scale. There is also a new mission (‘The Pits’) and three new characters, which of course, means that you can tinker and tweak scenarios even more. And to think that it can all fit into an iPad is well, breathtaking. 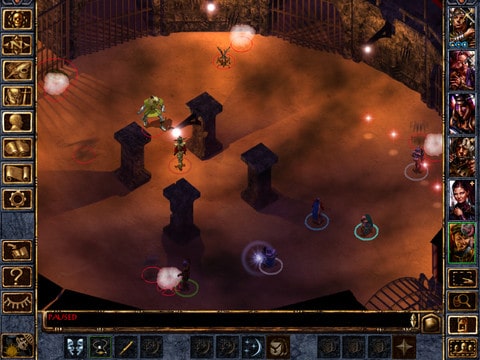 Once however you have finished being stunned – it happened with us about twenty minutes into the game – the game’s failings start showing up. For one, the transition from being a mouse-driven affair to a keyboard one has not been altogether smooth and while tapping on a place to make your character move over there works well enough, things get VERY messy in some of the bigger battles when you actually find yourself straining to choose just the right option. Hell, we even sometimes had problems going through our inventory, and the game is not exactly crash-proof. 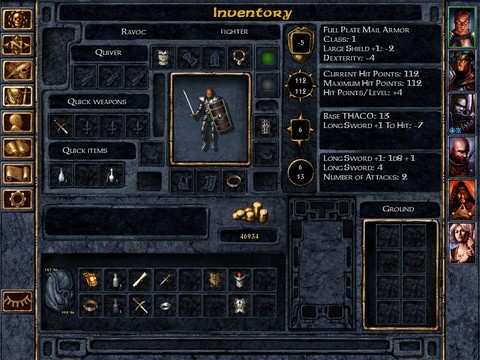 Yes, it is back. Yes, it is magnificent. Yes, it is the FULL game and then some. Yes, we are delighted. But it is far from perfect. Veterans will wince but gamefully (pun intended) put up with the irritants of interface and the odd crash. But those who have heard of rather than played Baldur’s Gate are unlikely to be as forgiving. The developers have already said that “a new update is in review” and in our opinion, it could not come soon enough. Baldur’s Gate: Enhanced Edition is pretty much a must-have if you have played the game on the PC. But if you have not, and are short on patience, we would advise steering clear. At least until it gets a tad more stable.

Was this article helpful?
YesNo
TechPP is supported by our audience. We may earn affiliate commissions from buying links on this site.
Read Next
Voila AI Artist: Cartoon Yourself with the Power of AI
#app review #Baldurs Gate #daily app #iOS app #RPG