OnePlus has gone through several strategic changes as a brand since its inception. From the initial enthusiast brand that focused on offering flagship-level performance at a relatively low price, changing course towards premium products, and targeting the masses with the Nord series, OnePlus has made great strides. 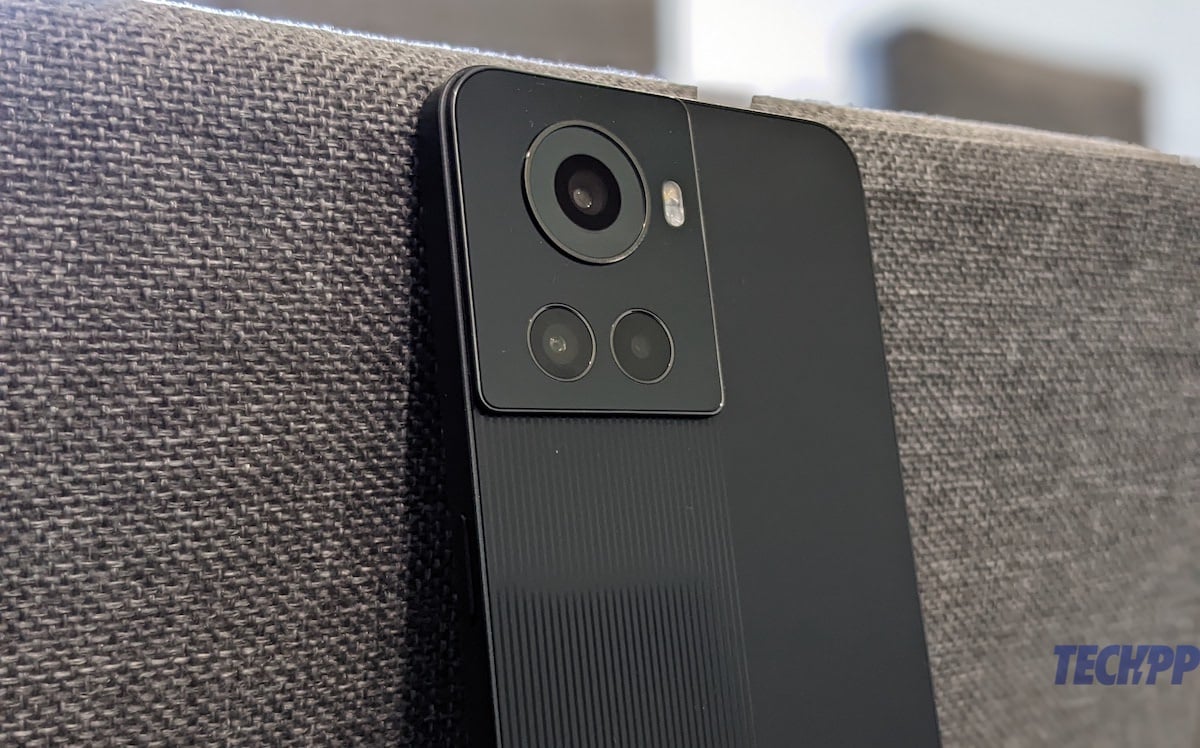 However, this development has been criticized by many OnePlus users on various occasions. A recent example of this backlash was the announcement of OnePlus’ merger with Oppo for its business in India, the effects of which are already beginning to show.

OnePlus 10R 5G, the latest smartphone from OnePlus in India, comes as a result of this merger. It’s essentially a rebadged Realme GT Neo 3 with practically the same specs but with Oxygen OS running on top.

We’ve already highlighted our thoughts about the device in our OnePlus 10R 5G review. This one’s a dedicated review on its camera performance, detailing our findings and experience with the cameras after using the device for several days.

As we mentioned earlier, the OnePlus 10R is a rebranding of the Realme GT Neo 3. As such, it features the same cameras as the GT Neo 3, with a slightly different camera housing on the back. This setup includes a large camera sensor on top with a LED flash on the right side, followed by two small sensors below it on both sides, all housed in a rectangular module. 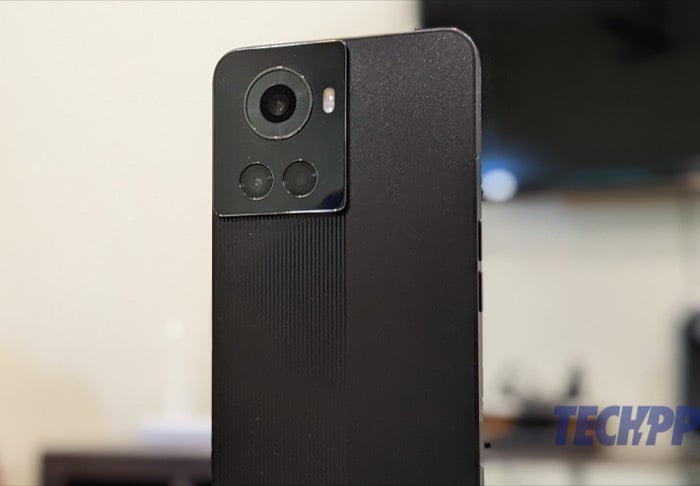 As for the optics, the OnePlus 10R 5G features a 50MP Sony IMX766 primary sensor with an f/1.8 aperture and OIS. In case you don’t know, this is the same 50MP sensor that OnePlus uses on the OnePlus 9 Pro for its ultra-wide-angle camera. In addition to the main sensor, there’s an 8MP ultra-wide-angle sensor (with an f/2.2 aperture and 119.7-degree field of view) and a 2MP macro sensor.

On the front, the OnePlus 10R has a 16 MP sensor with an f/2.4 aperture and EIS housed in a centrally placed cutout on the front. 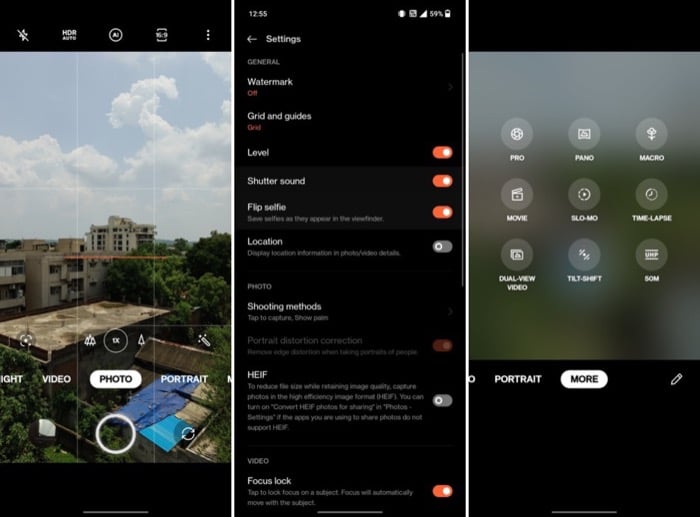 In general, the OnePlus’ camera app has always provided a good user experience: It was fast, responsive, and fairly easy to use on most devices. This experience extends to the latest OnePlus 10R, which runs the camera app smoothly and has clearly laid out all menus for easy access.

Speaking of shutter response, the camera app on the OnePlus 10R takes pictures almost instantly with no noticeable lag. It offers a decent collection of filters, which you can find under the Effects button. There is also a Google Lens button in the app that allows you to perform a quick Google search for a text or object that you find directly in the camera app. 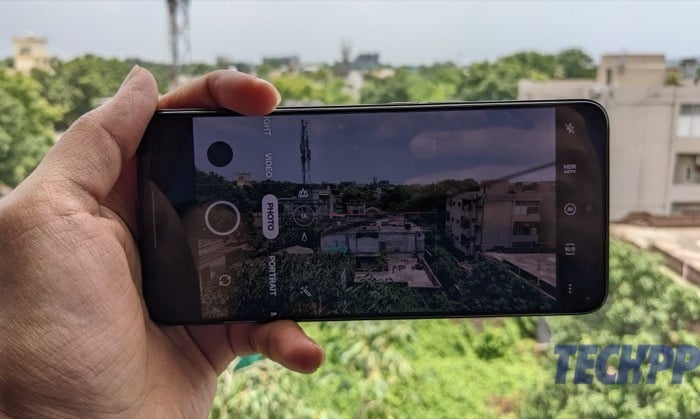 The top row features the usual options known from other OnePlus phones, such as flash, HDR, aspect ratio selection, timer, and settings. In addition, the OnePlus 10R has an AI scene enhancement mode that improves pictures taken in low-light conditions to reduce noise and sharpen underexposed/blurred objects in the frame.

The OnePlus 10R 5G has a lot to offer in terms of shooting modes. There are PHOTO, VIDEO, NIGHT, and PORTRAIT modes on the front. Clicking on MORE brings up even more shooting modes like PRO, MACRO, DUAL-VIEW VIDEO MOVIE, 50M, and more. All of these modes are pretty self-explanatory and work well for the most part.

We think that keeping the PRO shooting mode on the OnePlus 10R is a great thing, as it allows you to correct the camera’s shortcomings when it’s trouble rendering images correctly. However, the overall imaging of the device is far from perfect. As a result, there’s very little you can get out of the PRO mode.

Now that the basics are clear let’s take a look at some examples of the OnePlus 10R to find out how it performs in everyday use.

As you can see, the sky looks completely washed out in both images and lacks sharpness. The saturation is too high on the image taken with the standard lens, so the trees look unnatural. Also, the sensor tends to take warmer pictures than it seems in most situations.

In terms of sharpness and color reproduction, however, the standard lens performs well, and we can not complain in those areas. On the other hand, the ultra-wide-angle lens maintains a neutral hue but struggles to expose shadows properly and produces softer images.

Below is another shot from the primary sensor of the OnePlus 10R 5G. 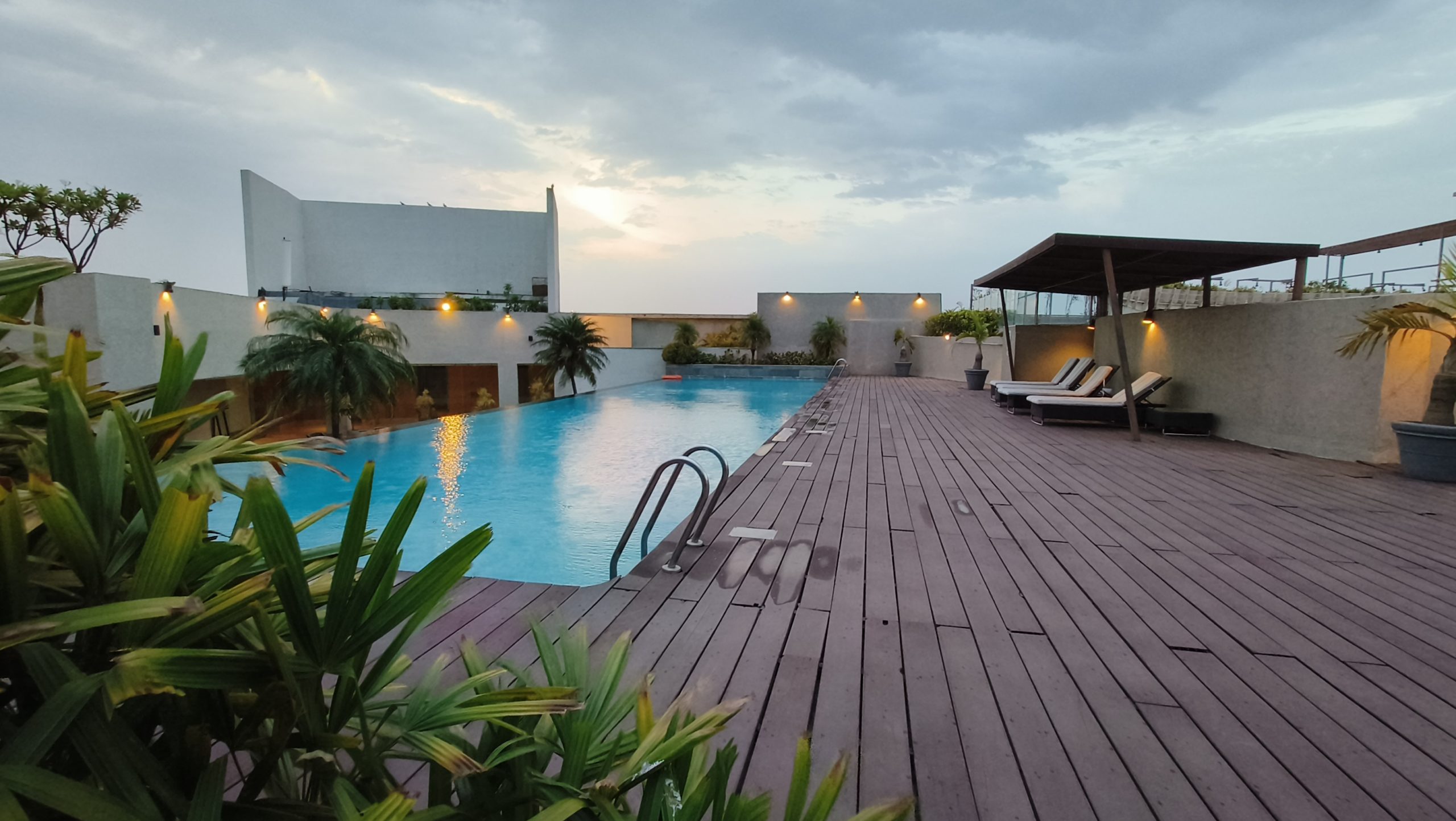 The picture was taken in the evening, and the sensor performs well in this case, managing to reproduce the sky almost exactly. Color reproduction is also good, as are saturation and sharpness. There is enough detail in the image, and we have nothing to complain about in this shot.

Zooming Capabilities of the OnePlus 10R

Speaking of zoom capabilities: The lack of a telephoto sensor on the OnePlus 10R 5G is a major drawback, requiring the use of the main sensor to zoom in on distant objects in a scene. Below are two shots taken with the 10R at 2x and 5x zoom.

In our opinion, the 2x zoom shot got most things right, and the image is suitable for casual social media photo sharing. However, if we have anything to complain about, it’s the exposure that seems out of place in this image, as it did in the image we reviewed earlier. On the other hand, the 5x zoom shot is downright soft, lacks detail, and looks underexposed. 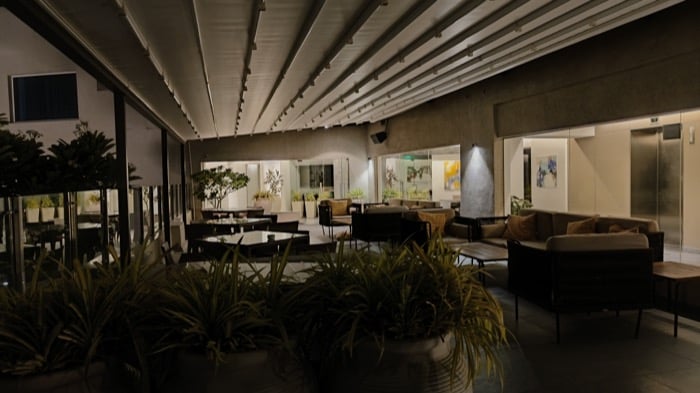 The plants in the foreground look sufficiently exposed and sharp, and the sensor manages to keep the color temperature close to natural. However, the same cannot be said about the image taken with the ultra-wide-angle sensor, which looks rather soft, underexposed, and washed out in most lighting conditions.

Putting a macro sensor – and a 2 MP sensor at that – in a smartphone in 2022 is simply a bad decision. We say that because the macro lens of the OnePlus 10R produces some truly pathetic shots, as you can see in the pictures below.

Both images show a lack of saturation, detail, and sharpness. Color reproduction is just plain bad, and the sensor often has trouble focusing properly, resulting in blurry images and making the sensor pretty useless for the device.

Most of the issues with the OnePlus 10R 5G’s camera performance also carry over to the front-facing sensor, which performs well in well-lit conditions but struggles to capture detail and sharpness and get the white balance right in other situations. As a result, images often appear oversaturated, which detracts from the look of the image as the skin tone looks unnatural.

However, there were moments when the selfies looked balanced, and the colors, details, and saturation levels were just right. We think this has more to do with the lighting conditions than the hardware itself, which puts the device in a predicament where it sometimes takes good photos but has trouble doing so consistently when the lighting conditions are a bit challenging. 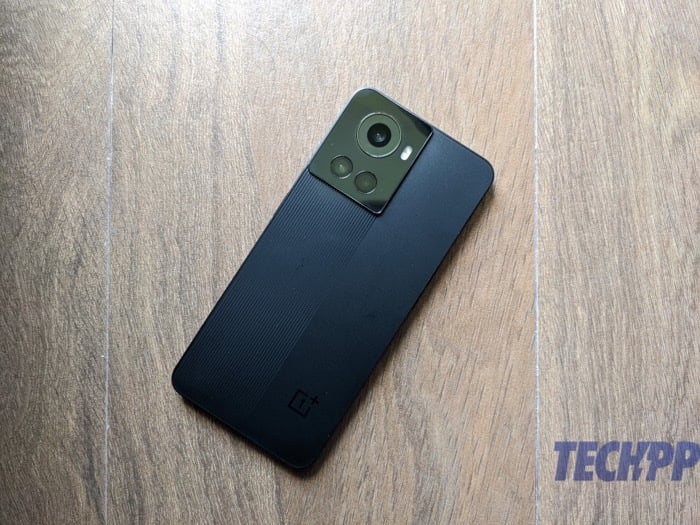 As for video recording, the OnePlus 10R can record videos from the rear sensor in 4K at 30fps and 1080p at 30fps. In our opinion, the 4K recording option cannot be used effectively as there’s no kind of stabilization support. On the other hand, the 1080p recording option manages to stabilize the footage quite well, so you should shoot videos with it unless you use a gimbal.

As for the quality of the footage, the color reproduction of the OnePlus 10R remains an issue. We often found that the device struggles to get the color balance right, resulting in shots that look faded and nowhere near what the scene looks like in real life. 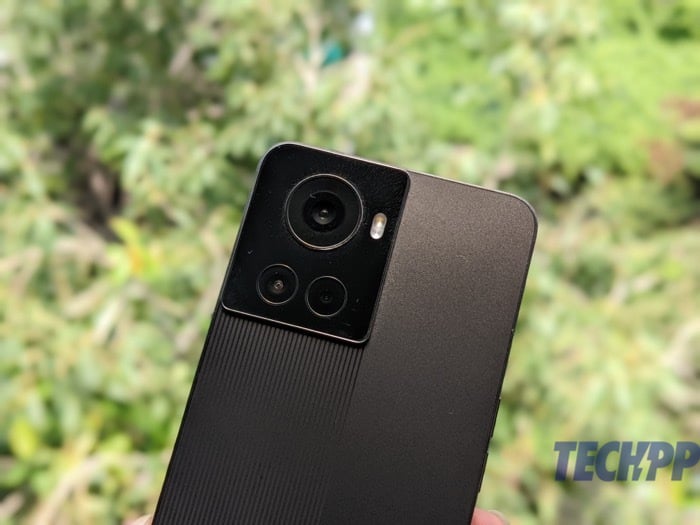 Aside from the lack of OnePlus esthetics and the absence of a notification slider, which many see as a departure from OnePlus’ distinctive appeal, the OnePlus 10R is a pretty solid performer in terms of everyday use.

It’s equipped with the MediaTek Dimensity 8100 Max processor, which runs smoothly and easily handles pretty much any mundane task you throw at it, including gaming. The 6.7-inch display with HDR support and 120 Hz refresh rate is ideal for content playback. Finally, the phone has solid battery life and comes with a 150W charger (exclusive to the OnePlus 10R Endurance Edition) that charges the battery in just under 25 minutes – all of which makes the OnePlus 10R a solid offering.

However, this isn’t true when you bring the camera performance into play and consider the starting price of 38,999 rupees. The phone suddenly seems overpriced due to its average imaging capabilities, and virtually nothing sets it apart from other devices in its price range.

So if cameras are a big obstacle for you when choosing a smartphone, you should look at other devices like the Xiaomi 11T Pro, which offers pretty solid performance with good cameras, or the iPhone SE (2022) if you don’t mind switching to the Apple side of things.

Was this article helpful?
YesNo
TechPP is supported by our audience. We may earn affiliate commissions from buying links on this site.
Read Next
OnePlus 10R 5G Review: The OnePlus with a Difference
#camera #Camera Review #oneplus #OnePlus 10R #review