Most people have probably heard about RAM (Random-access memory), which lets you access any byte of memory without touching the preceding bytes, hence the random name. RAM is still the most common type of memory and you will find it in your computer, smartphone, tablet and many other electronics. Basically, it’s one of the features that are on the basis of the $1.1 trillion electronics market. 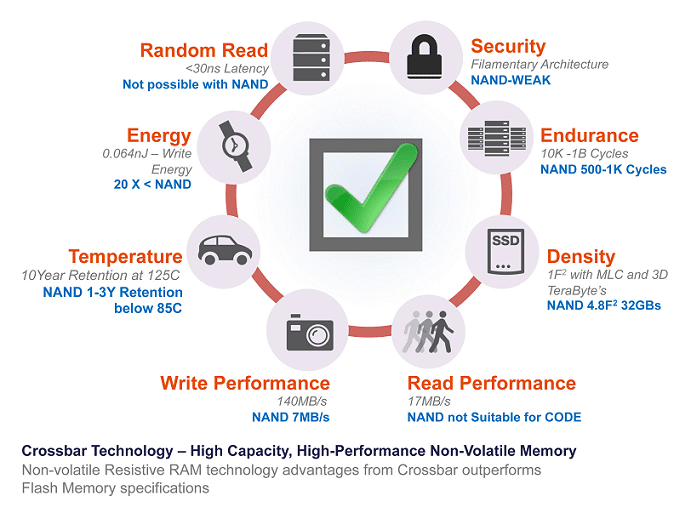 But do you know what Resistive RAM is, or simply RRAM or ReRAM? The official description goes like this:

a non-volatile memory type under development by a number of different companies, some of which have patented versions of ReRAM

To put it in plain English, this is the next step when it comes to flash memory. Indeed, there is a number of different companies that are working on this technology but it seems that we have one that’s ahead of them all.

Crossbar, a company placed probably in the best location for such start-ups, Santa Clara, California has officially gone “out of stealth mode” and announced a new kind of a memory chip that might prove to be revolutionary for the $60 billion dollar flash market.

Resistive RAM can store up to a terabyte of data on a tiny chip. How tiny? Well, even smaller than a postage stamp. One terabyte of data, which means around 250 hours of high-definition, on a very small memory chip is bigger news that we might realize right now. Just think about this – flash memory is present on your phone, on your tablet, your digital camera, laptop and so on. The RRAM technology developed by Crossbar is able to access data twenty times faster than the fastest available flash memory.

When it comes to flash memory, speed is indeed essential, and RRAM has some truly impressive numbers to put us in complete awe:

But there is more than just speed: RRAM consumes 20 times less power, thus seriously extending the battery life of devices that will carry it. And these tiny chips are also resistant, having 10 times the endurance of NAND flash chips that are currently the standard on the market. Crossbar has a bright future ahead for itself, as it has all the chances of being in the center of the wave that will bring new technologies in the flash memory market. That’s why it has managed to raised recently $25 million from Kleiner Perkins Caufield & Byers, Artiman Ventures, and Northern Light Venture Capital. 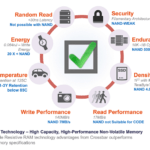 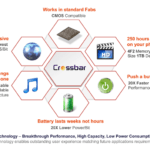 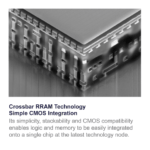 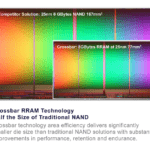 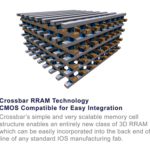 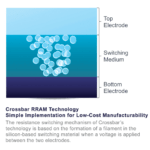 But, as Dean Takahashi with VentureBeat observes, we won’t see Resistive RAM that soon on the market, because of how things currently are in the flash market:

Of course, it is always difficult for a new technology to replace an existing one that is operating on a huge economic scale. Flash memory chips may not be as fast, but if flash memory chip makers can build more advanced factories and spend more money on designs, they could try to fend off Crossbar as it goes through its process of trial and error before it hits the market.

The direct effect of Crossbar’s chips on your day-by-day electronic device will mean a faster storage, better playback, and smoother backup and archiving. But the Resistive RAM technology has all the chances of making its way into solid-state drives and cloud computing devices and, who knows, maybe even in future wearable gadgets such as Google Glass. And for the tech-savvy, here’s what a Crossbar memory cell is based on

A non-metallic bottom electrode, an amorphous silicon switching medium, and a metallic top electrode. The resistance switching mechanism is based on the formation of a filament in the switching material when a voltage is applied between the two electrodes. That is the basic structure of a memory cell, which is repeated over and over again in order to store the ones and zeroes of digital information.