15 Things we Learnt from iPhone 5s and iPhone 5c Teardown

Tearing down the latest iPhone is an ugly job, but somebody’s got to do it. Thankfully, there are experts on this planet like the team from iFixit that can tear down an iPhone so that we could get to know what exactly is inside this little tech wonder. As you already saw from early reviews of the iPhone 5s and the iPhone 5c, there aren’t substantial changes from the previous generations, but still, some things have been modified.

If you are curious to see what’s different in the latest iPhones, then read on to discover. The original purpose of these teardowns is to see how reparable Apple’s smartphones really are. And we know that Apple isn’t doing very good in this field and it doesn’t even try to improved. Both the iPhone 5s and the iPhone 5c got the same weak repairability score: 6 out of 10. But let’s see what the repair team has managed to discover inside the hardware.

The battery is stuck in with a lot of glue 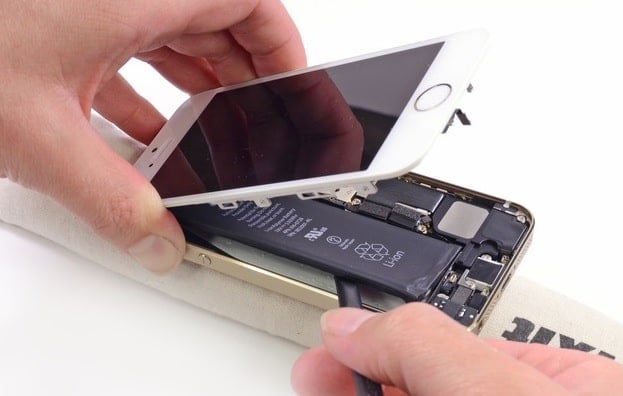 For those of you that are lucky enough and will get to see their iPhones one or two years (which could happen also thanks to good cases), you might not even think about battery repair, but you should know that there’s now much more glue than with the iPhone 5.  So, if you hope you can replace your iPhone 5s battery on your own, then you really have to be good at this, at least like the iFixit team is. Apple is no longer using the minimal adhesive in the iPhone 5 and has decided for two big runways of adhesive that make sure your iPhone 5s’ battery stays in its place. My guess is that Apple did this for increase shock protection.

Even if the iPhone 5s comes with the same battery life numbers like the iPhone 5, it seems that there’s a slightly bigger battery inside, as previously assumed. The iPhone 5s’ battery has a 1560mAh capacity, up from iPhone 5’s 1440 mAh. The batteries inside the iPhone 5s and the iPhone 5c are labeled “Apple Japan,” which is a label we see the first time, probably indicating that a factory from Japan is now delivering the batteries.

Potential degradation in time of the fingerprint sensor 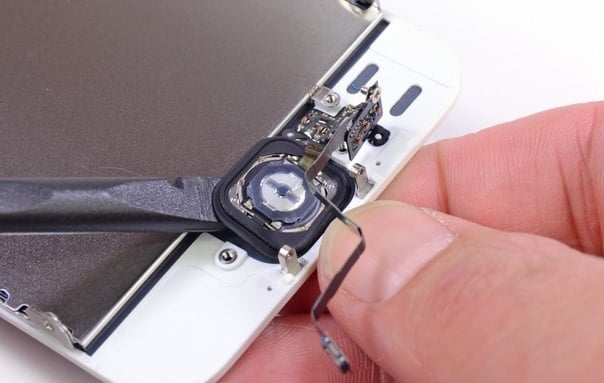 I’ve seen this coming right when I saw Apple first introduce the feature but now a bunch of engineers share the same concern, as well. The sapphire crystal that is covering the fingerprint sensor has a tough job ahead of it – to protect it from degrading over time which happens with most CMOS fingerprint sensors. It’s obvious that Apple couldn’t have tested this as much as they wouldn’t try because nothing compares a real-life use with the iPhone for one year, for example. iFixit engineers see this as a potential ticking bomb.

We don’t notice the small advances that Apple performs inside its iPhones, and that’s why teardowns are great. The iPhone 5s comes with a more streamlined and optimized internal construction. iFixit especially refers to “silly” antenna interconnect cables that were very yeas to break or to accidentally disconnect. That has been fixed now and some of the tiny cables are no longer there.

On the backside of the logic board, iFixit has found Apple’s A7 APL0698 System-on-Chip. According to the F8164A1PD markings (also referred to as silkscreen code) it seems that the RAM is likely to be 1GB. The logic that iFixit follows is carefully explained in a short thread on MacRumors’ forum, do give it a glance.

The M7 co-processor is “invisible”

Now, this might come as a surprise for many, but it seems that the iFixit team, as well as others, haven’t managed to find the M7 co-processors. The engineers even joked around, saying: maybe the “M” stands for “magical,” the M7 is invisible, or perhaps the “M” stands for “marketing”. I have a feeling, though, that Apple will soon step in and will dissipate the mystery. 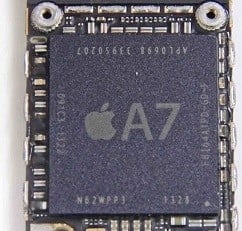 this is an enlightenment for many, including myself. Apple has highlighted the fact that iPhone 5s is the first smartphone in the world to come with a 64-bit processor in a smartphone. We’ve tried to explain what exactly that means, but what AnandTech has observed, iFixit has now confirmed: the increased performance in Apple’s A7’s processor isn’t a direct effect of the 64-bit architecture. Apple has switched to the newly-designed ARMv8, which is an instruction set especially designed for the 64-bit architecture. 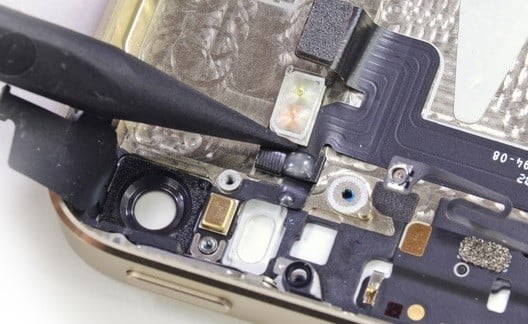 One of the small improvements found in the iPhone 5s over the iPhone 5 are in the camera department. The new dual flash comes with white and amber LEDs that are definitely going to help you take better pictures during the night. Matthew Panzarino from TechCrunch explains why it matters that much:

This thing is the crown jewel of the new iPhone’s camera capabilities, in my opinion. Yes, many people will probably still avoid using a flash, but the sheer engineering prowess here is insane. The dual-LED flash in the iPhone 5S is not about providing more light, instead, it’s about providing light of a more accurate color. The flash in your pocket camera or DSLR, or in the current iPhone, is calibrated to a single color that approximates sunlight. This is fine in the sun as a fill light, but goes all wrong when you try to shoot an image with it indoors or under artificial light

We know that the iPhone 5c is a little more bulkier than the iPhone 5s, but we don’t have all the details regarding this. iFixit discovered that the volume buttons on the iPhone 5s are considerably larger, but they don’t say exactly by how much. Also, the 10-hole microphone grille and the 16-hole speaker grille have apparently been replaced with 1- and 4-hole grilles, but I’m not sure exactly how is that going to affect the sound quality, since reviewers have not found anything wrong there. 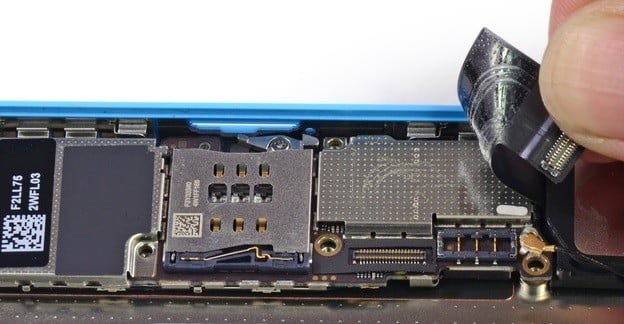 Repair engineers hate glue, that’s what iFixit has made very clear in their teardowns. While the iPhone 5c’s battery isn’t as “glued” as the one on the iPhone 5s, it’s still not very easy to remove. But the real pain comes when trying to remove antenna connectors as it appears that they are now adhered connectors. Again, this is a probably a good thing if you drop your iPhone 5c down (some good cases here can help you, as well) and not so liked by the folks that will try to repair your iPhone, if we’re not talking about Apple.

The display unit is heavier than iPhone 5s’

The iPhone 5s comes with a slightly lighter display assembly, even if it houses the new fingerprint sensor and the luxurious sapphire home button. We don’t have all the precise details, but my guess is that Apple has perhaps chosen some cheaper materials which have proven to be also slightly heavier, but I might be wrong.

The rear panel of the iPhone 5c is all polycarbonate, which, as Apple says, was needed in order to bring those vivid colors. While that might be true, it’s also true that Apple has managed to cut costs and to obtain a higher profit margin. However, as per iFixit’s test, Apple did not compromise the build quality and the plastic is quite strong and doesn’t bend.

The rear case is much heavier than iPhone 5s’

You’d think that more plastic on the iPhone 5c should make it lighter than a metal iPhone, but it seems that we’re wrong. Apparently, “a greater mass of plastic is needed in order to match the strength and durability of a lesser mass of aluminum”. Thus, the iPhone 5c’s rear case is heavier: 43.8 g vs 25.9 g for the iPhone 5s.

Update: this just in – Chipworks has managed to confirm that the A7 is still made by Samsung, so it seems that the war between these two companies isn’t as big as they say, or, they go by the saying: scratch my back and I’ll scratch yours. After all, Apple has decided that it won’t switch its SoC manufacturing to TSMC, as it was rumored, but rather stick with Samsung. Chipworks, unlike iFixit, has managed to locate and identify the M7 co-processor and it seems to be manufactured by NPX.