There’s always that one person (or three) or dangling wire. You think you have taken the perfect snap, but the moment you look at the image, you see a person or object (a wire, a dangling branch, a vehicle, but NEVER a dog!) in the background that either totally kills the shot, or takes it from wow to duh.

If we were in Hogwarts, getting rid of said person or object would be as simple as waving a wand and uttering the spell “Evanesco.” Things are a bit more difficult in the non-magic world. You have to either be a Photoshop wiz or have to put up with different image editing tools, which remove the offending object or person but leave blemishes or smudges behind, defeating the very purpose of using them.

Or you could get one of the new Pixel phones.

Google introduced its Magic Eraser feature for Google Photos with the Pixel 6 and 6 Pro last year and has also included it in the recently released Pixel 6a, with an added Camouflage option. The feature is available only on these phones and can be used not just on pictures taken by the phones but even on pictures uploaded to Google Photos (even if you shot them using other cameras). You just need to access them on Google Photos on a Pixel 6 series device. And while it will not give PhotoShop a run for its money, the Pixel’s Magic Eraser delivers very good, realistic, and generally smudge-free results and is more than enough for most users.

How to Use Magic Eraser on Google Pixel phones

And using it is incredibly simple. If you have a Google Pixel 6, 6 Pro, or 6a, just follow these steps:

Step 1: Make sure your Pixel is updated

This might sound a bit duh to some, but we do know of people who forget to update apps. Just ensure that all Google apps and Google Photos are updated on your Pixel. Even our unit of the recently released Pixel 6a did not come with the Magic Eraser feature out of the box – it popped up only after an update. So go ahead – update that Pixel. It is as simple as going to Settings and choosing System. 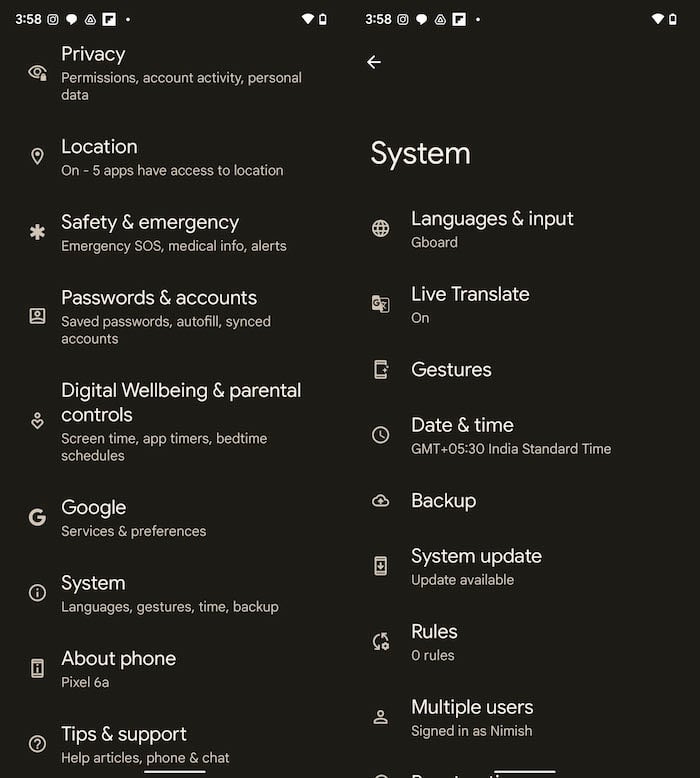 Unlike most other Android phones, Pixel devices do not have a photo gallery or photo album app but use Google Photos. Go ahead and pick the picture you want to give the magic treatment to. Remember, you can choose ANY picture on Google Photos for this. We chose a picture of Connaught Place, with a wire inevitably messing up our view of the tricolor flag in the set, silhouetted against a blue sky. 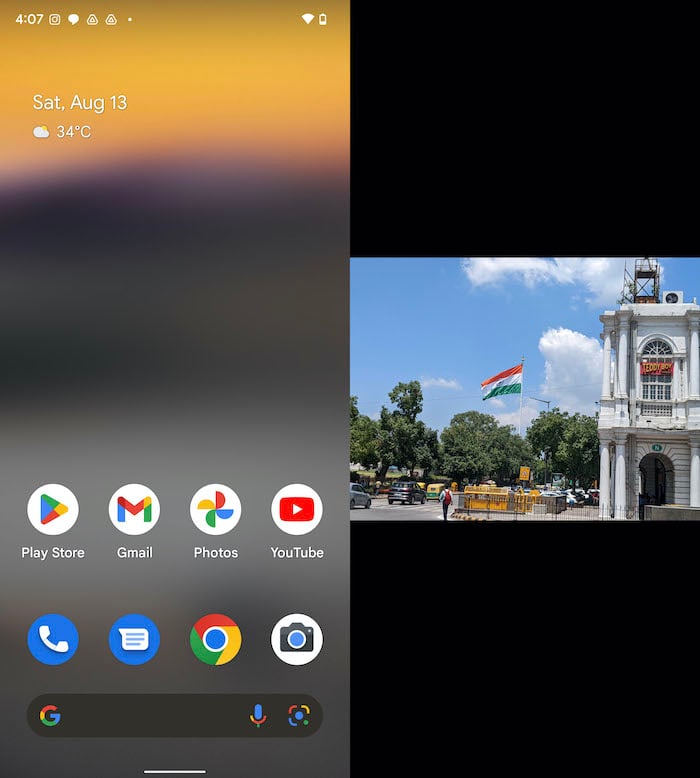 With your image selected, choose the Edit option. In some cases, you will see the Magic Eraser making an appearance right away under Suggestions. But in most cases, you will have to scroll through the options until you reach Tools, between Crop and Adjust. Tap on Tools, and you will see three options – Blur, Magic Eraser, and Sky. No prizes for guessing which one you need to select. 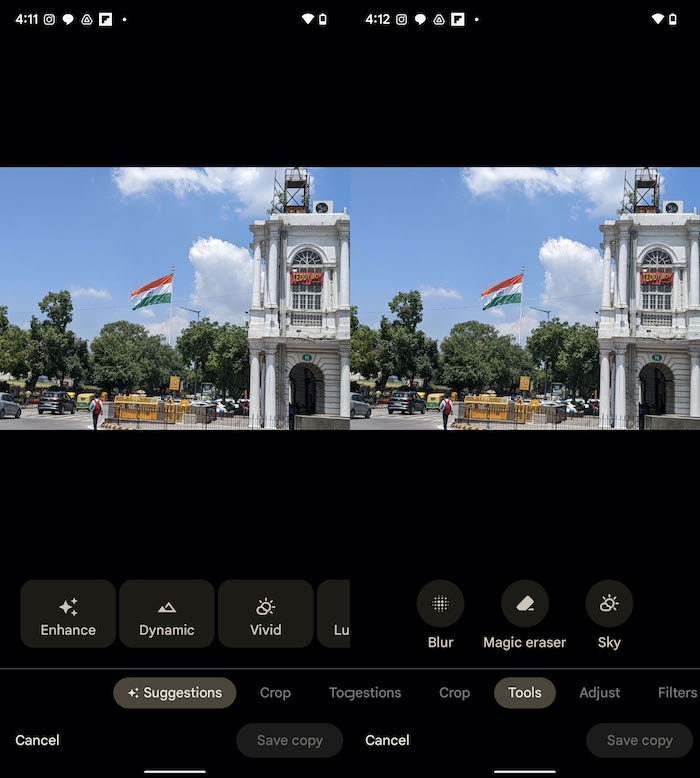 Step 4: And the nominees for erasure are…

The moment you select Magic Eraser, the app actually starts scanning the image for what it thinks are objects that should be erased. In a few seconds, it will show you the options it has chosen, outlined in white in the image. You can get a closer view of the outlined figures by zooming in using two fingers. You might feel the need to zoom in because Magic Eraser seems to work only when you hold the Pixel in a vertical position, which gives you a smaller, black-banded view of your image. 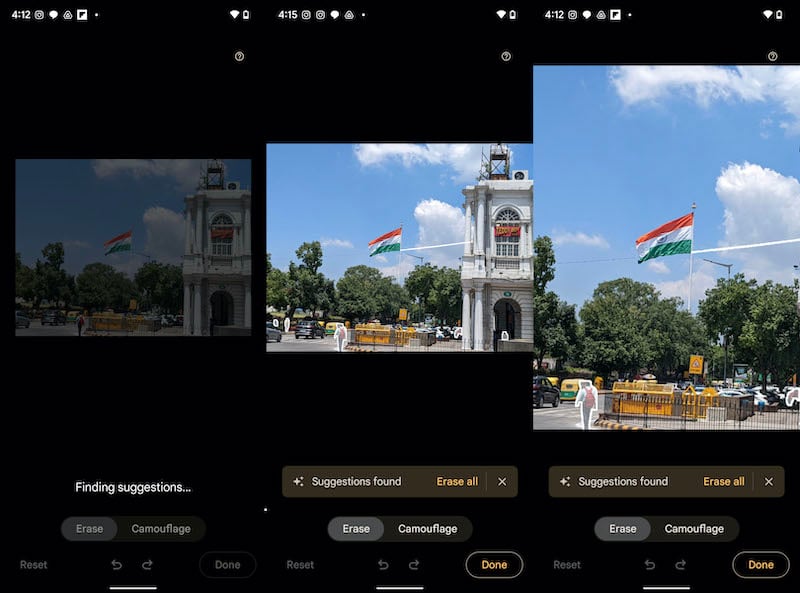 And now comes the interesting part. You can either agree with Google’s suggestions and simply tap Erase All to remove all objects that Google considers out of place (it calls them Distractions) in the image. If you want to remove some of them, then just tap on the ones you wish to remove. If you want to make your own selection, just highlight the objects by moving your finger over them…and see them disappear. For the record, Google Photos is very good at detecting cables and poles and even people who seem to be out of place, so we suggest taking a good look at the options it offers. 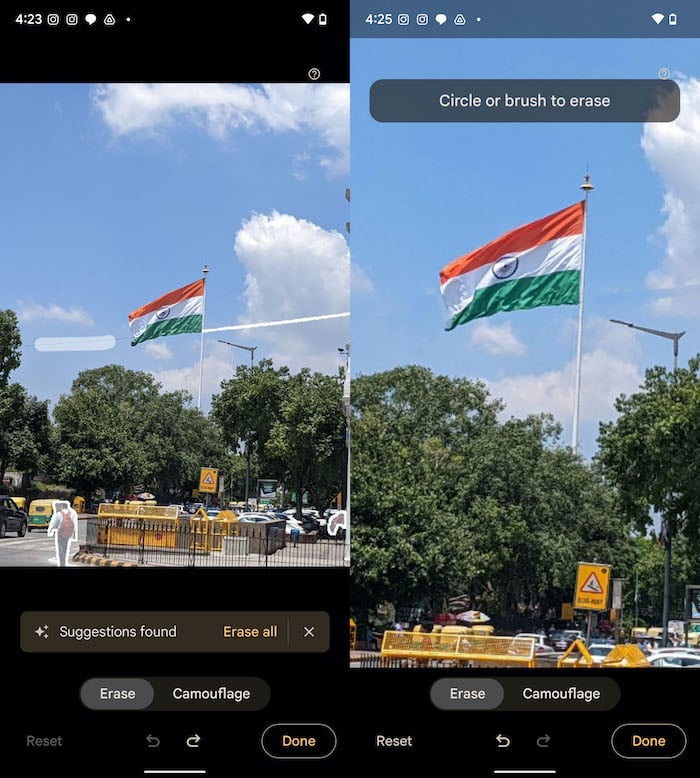 Step 6: Or just Camouflage them

The Pixel 6a comes with an option called Camouflage in Magic Eraser (the feature came to other Pixel 6 series phones later) – it appears next to Erase. Using Camouflage is not as dramatic as Erase, as the object you select will change color to blend into the background but will not fade altogether. So when we tried to mark a cloud near the flag for Camouflage, it simply got a little bluer in an attempt to blend in with the sky. 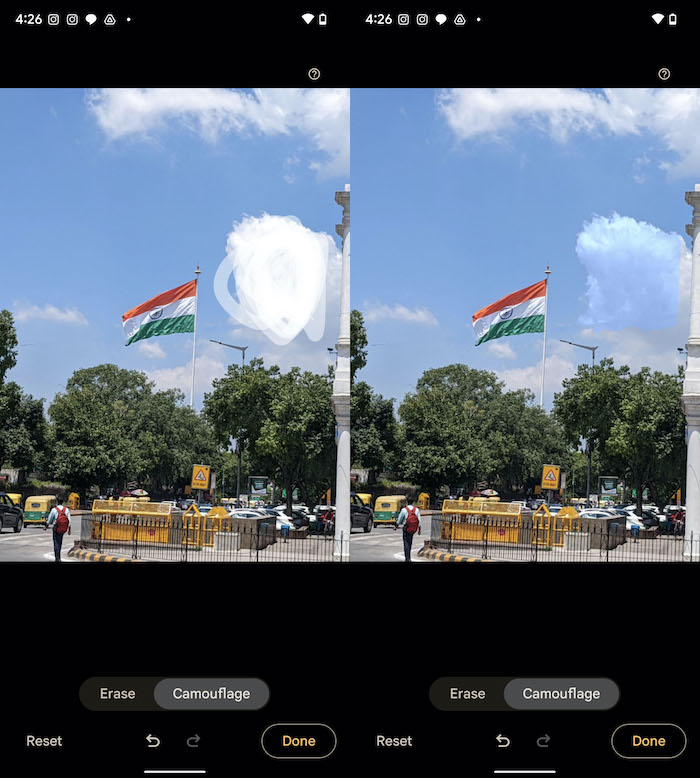 Check the results of your erasing or camouflaging, and hit the backward-pointing arrow just below the Erase and Camouflage options any time you wish to undo your changes. Once you are happy with the results – please zoom in with two fingers to make sure you like them – tap on Done and then Save Copy to save your image. That’s it.

It really works but do not overdo it

Magic Eraser works rather brilliantly in many cases, living up to its name. But it is not perfect, which is why we insist that you zoom in to review your changes, as there often can be a few smudges left in the area from which the object was erased. In our picture, removing the errant wire from around the flag was a piece of cake for the Magic Eraser. But the results were less magical when we tried to remove a person and a car from the road! End of the day: you will get great results as long as you stick to removing objects that are very clearly outlined and do not have too much around them. 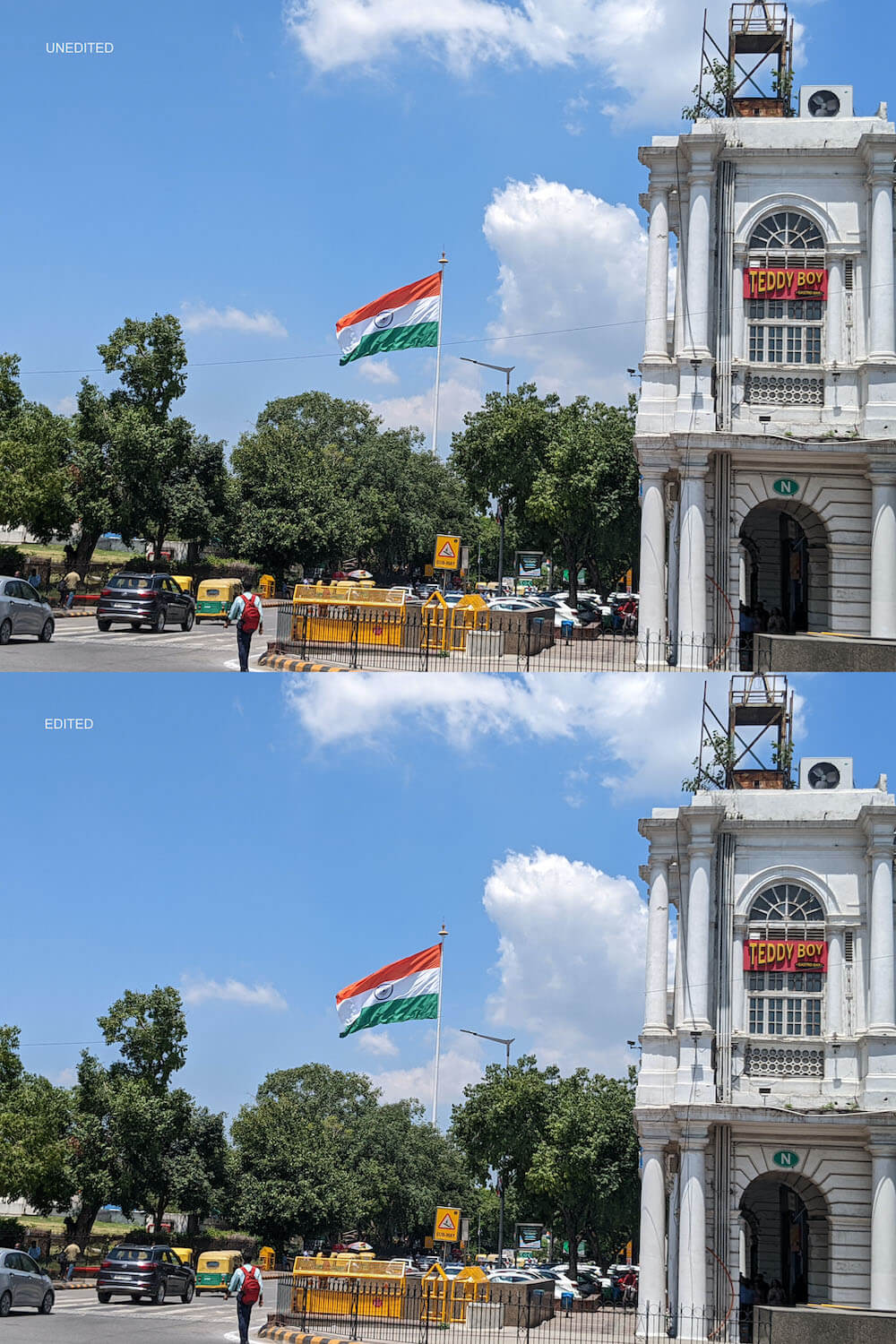 The best part is that if you upload images to Google Photos, you can remove unwanted objects from them, as long as you use a Google Pixel. It is the closest you get to Evanesco without a wand!

TechPP is supported by our audience. We may earn affiliate commissions from buying links on this site.
Read Next
20+ Best Google Doodle Games You Should Play [in 2023]
#google #google pixel 6a #how to guide #Magic Eraser