Google’s valiant effort of chewing healthy percentages of the market with a slim, powerful notebook that solely functions on its Chrome OS browser has returned, and this time with a bit more oomph. Today, Google has launched the new Chromebook Pixel, a bit over a year after their first attempt with a proprietary device, which was deemed at that time a bit too pricey for what it has to offer. 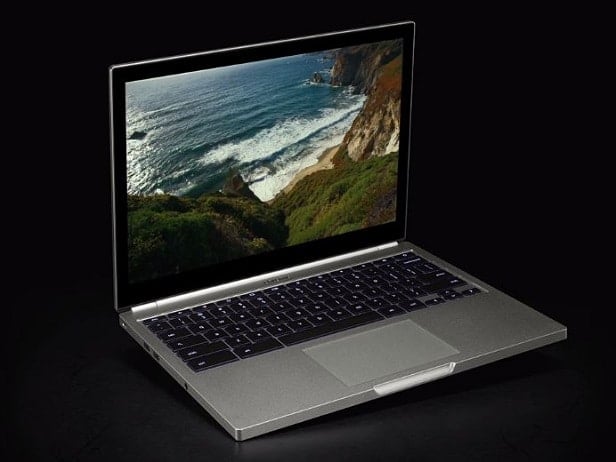 With the passing of the days, the web-based giant has come with an upgraded variant, which packs powerful hardware specifications and a small, crisp screen, fully equipped with a touch-screen panel and various connectivity ports. And of course, there’s a catch: the price.

The New Chromebook Pixel, by Google

Getting into details, the newest Chromebook Pixel has preserved the design marks of its predecessor, which can be seen as a rather shy move from Google. In fact, the newer model is almost the same as the first Pixel, keeping the the slim, hard-cornered lines that many have approved. On this matter, Google may have preferred to improve other aspects of its product, instead of increasing the selling price with a complete re-design.

Speaking of keeping good things, Google has also kept its eye focused on the display quality, and with the newer Pixel model, the panel features a maximum resolution of 2560 x 1700 pixels, totaling a sparkling 239 PPI pixel density figure, on a portable 12.85-inch diagonal. The panel is also bright, and has an extra-wide viewing angle, constructed with a suitable media-friendly aspect ratio.

On the inside, future buyers will find the 5th generation of Intel i5 and i7 processors, clocked at healthy frequencies.

When it comes to serious improvements, we must applaud Pixel’s extra long battery life, which is said to last up to 12 hours without a charge. Moreover, Google has implemented the possibility of fast-charging, allowing users to get 2 hours of full charge in the first 15 minutes (but only if you close the lid).

Another good thing is the connectivity part. The new Pixel is packed with two USB Type-C ports, which can be used to fast-charge future devices (this standard is yet to become popular) but also to quickly transfer media files or even power a high-resolution display. As you may know, the USB Type-C port is present also on the new Macbook, and it’s a slimmer, enhanced variant of the traditional option. Being smaller, any USB-C cables have identical ends and can be fitted on either sides, without having to worry for the classic struggle.

Well, the most annoying part is the price. While the original Chromebook Pixel was way overpriced, with the release figure at $1299, the new variant costs just $999. Even though that’s a huge step down from Google, which managed to increase the computing power by fitting a powerful processor, new generation RAMs and so on, it is still a bit too much for a laptop, which solely relies on web-based applications. And pay notice, the price goes up if you go for the more powerful variant.

Speaking of downsides, one of the most important is the operating system itself. Of course, if you want to buy a Chromebook you must acknowledge the Chrome OS, but there are other variants of the market that are way less expensive. They don’t have the some computing power, but considering the system’s limited operations support, it’s usually enough. Chrome OS has grown, until the point it can open and edit a Microsoft Office Excel file without conversion, but there’s still a long road to go.

Another disadvantage is the storage option. The cheapest option is packed with only 32 GB of memory, which is also cut down by the OS itself, and the most expensive variant has just 64 GB, which sounds more of a cheap phone, than a pricey laptop. Of course, just like some phones out there, Google allows the insertion of additional SD cards to increase the storage, but it’s still a downside for a laptop this expensive.

The new Pixel is available for purchase on the Google Store , but at the moment it’s only available in the US.

Was this article helpful?
YesNo
Source: Twitter
Photo Credits: CNET
TechPP is supported by our audience. We may earn affiliate commissions from buying links on this site.
Read Next
20+ Best Google Doodle Games You Should Play [in 2023]
#chrome os #Chromebook #google #laptops