Motorola’s Moto X is the flagship series and is easily one of the favortie phones when it comes to a certain set of users who love the stock Android experience on a phone that is a good all round performer. Every year since it first came out, the Moto X has brought in something new to the game and now in 2015, Motorola doubles up the Moto X by bringing in not one, but two variants: first one that is focused on elongated battery life with decent specs while the second one that’s a massive multimedia entertainer with high end specs. This is probably got to do with the fact that the Moto X 2014 received mixed reactions in terms of battery life and camera performance, and hence Motorola has gone full guns blazing in 2015. The bigger (and better) of the two variants is what we will be talking to you about, the Moto X Style. 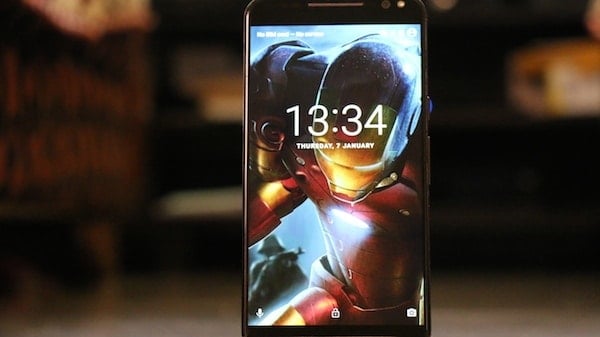 When we said massive, we weren’t mincing words – catching up with the trend of growing screen sizes, Moto X Style comes with a 5.7” QHD IPS LCD screen packing a whooping 520 pixels per inch, all protected by Gorilla Glass 3 – it’s a brilliant screen. As tall as it sounds, Motorola has worked a lot on the design to keep the bezels thin in bringing out a phone that is a pleasure to hold in spite of being 11.1 mm thick and weighing 179 gms. This is where you will appreciate a good design, though Motorola phones are infamous at times for being bulky. To put things into perspective, the Moto X Style is just as tall as the OnePlus One with a 5.5-inch display.

The front face of the phone has stereo speakers at the top and the bottom – brilliant sound output. Right side will hold a very shaky but ribbed power button and a pair of volume rockers. Top of the phone has the dual sim tray and the microSD slot that takes in 128 GB and a 3.5mm audio jack. Bottom portion holds the micro USB port. The back of the phone retains the standard Moto curved design and a 21MP camera with dual tone LED flash accompanying the Moto Dimple on a metallic strip – the dimple will come in handy when you hold the phone, with one of the fingers resting on it. The back is rubberized with skewed stripes all over it and at a certain angle the phone will slip off your hands. The phone is IP52 certified and can take in occasional splashes unlike the younger brother Moto G3 which can take a dip in the water for a short while. An alloy frame goes all around the phone and this is pretty much the metal in the build. All said and done, it’s a big disappointment that in countries like India, the Moto Maker is not offered which otherwise could’ve been an awesome customization experience. 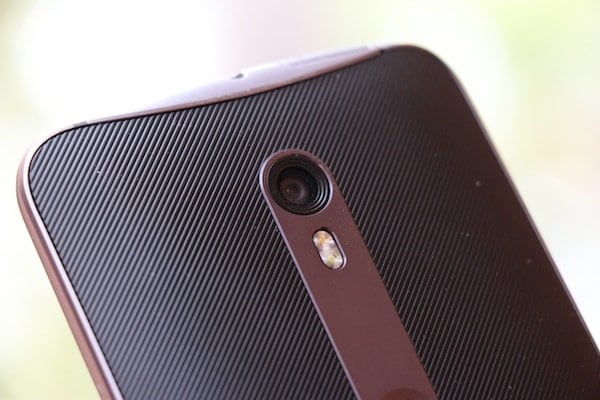 The innards pack a punch too – Qualcomm Snapdragon 808 Hexacore processor clocked at 1.8 GHz with 3GB of RAM and 16/32 GB of internal memory and a 3000 mAh non removable battery. Yes, like the LG G4, Motorola has chosen to go with the SD 808 insulating itself from the infamous issues facing SD 810. With Motorola’s highly optimized software, 3GB of RAM should just do fine, though many in the competition are offering 4GB (OnePlus 2, Asus Zenfone 2 etc) at a lesser price.

Speaking of software, Motorola is all about exclusiveness – near stock experience with some very handy features exclusive to their phones. Like the Active Display – Hover your hand across the screen when it’s on standby and it shows up the notifications without unlocking itself. Getting into notifications is as simple as dragging a specific icon upwards and it will allow you to read up the content. The all new Moto app holds tons of options in it. From enabling the double chop to fire up the torch or double twist to launch the camera or have the phone read out your text messages and accept voice notes to reply! We cannot tell you how much we appreciate these features. Though some of them work a tad slow, they can be super convenient when you are on the move or your hands tied up or wanna capture a quick shot – all of this without having to either touch or unlock the screen. The instant we got off to another phone, we so dearly missed these features we got used to – excellent stuff again. Other aspects of the software are pretty much stock Android and the overall performance of the phone was ultra smooth – and we saved the best for the last, Moto X Style at the time of this review is running on Android Marshmallow. And for those who are sticklers for the AnTuTu numbers, the Style scored a healthy 66873. 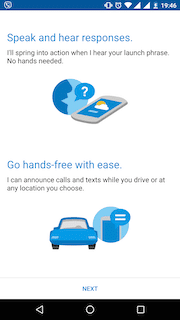 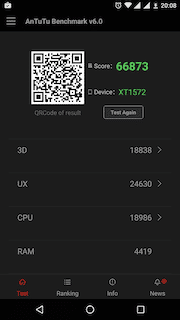 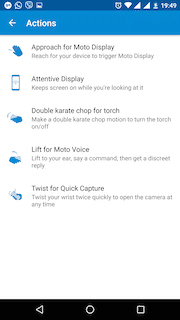 Dual front speakers (stereo after all), QHD screen (a big one at that) are nice prerequisites for a good gaming experience. Does the Moto X Style provide one? Hell yes it does! Most of the heavy games like Asphalt 8, Mortal Kombat, Riptide GP2 etc performed well with that occasional stutter when gaming for long periods of time. We did experience the phone becoming warm but never overheating. And boy did we love the output on the speakers as we gamed! Even at the maximum volume levels, it held to its own.

Camera was one department that the previous generation lacked a punch and this time around Motorola has done some improvements, at least for day light photography. The camera app is bare bones, but the 21 MP Sony IMX 230 lens with f/2.0 aperture with some software stabilization make way for some stunning pictures – good on dynamic range, sharpness retained even on zooming while handling the exposure with lots of lights around may need a little tweaking. Low light pictures though have significant amount of noise and grains in them clearly visible when zoomed in. That lack is made up for in the videos – crisp, good amount of voice captured. The front facing camera is good enough and the flash will more often than not wash out the picture is you’re too close to the subject.

Though while on Lollipop, battery life was below average, the Marshmallow update has done some wonders. Even on days of heavy usage, we managed to hit 4.5 hours of screen on time which for a QHD screen is very impressive. Call quality and signal reception was top notch – like we’ve always said, “Hey, its a Motorola after all!” 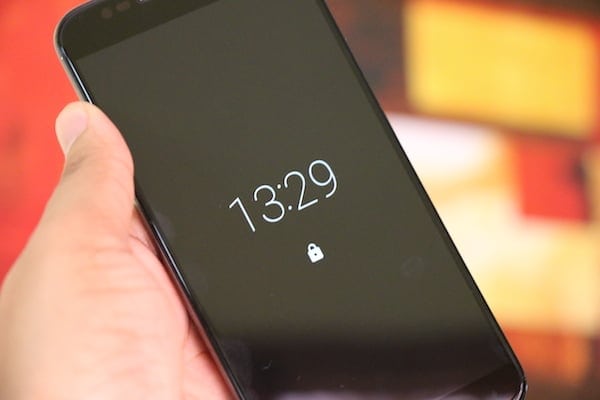 The Moto X Style is being sold at around 30,000 INR. There is no finger print scanner inspite of it being a flagship device. But a QHD screen, brilliant one at that, superb front facing speakers, smooth UI experience and highly reliable post sales service – all of this put together makes the Moto X Style a brilliant phone for its price. However if you’re hell bent on fingerprint scanner, you may have to turn your attention at the likes of OnePlus 2, the newly launched Yu Yutopia or the Qiku Q Terra. But do these come above something as reliable as Motorola? Or is the Style too big and bulky for you to handle? You have a choice to make.

Realme 6 Pro Review: Do not go by the name, this has the X…
Realme 6 Review: Profusely Pro in all but name
Lenovo IdeaPad Slim 5i Review: Slim in its Name, Strong at…
[First Cut] OnePlus 7: Pro by Value, Not by Name
Realme 6 First Impressions: Pro in price, Pro in specs, just…
OnePlus Nord: the Name is a masterstroke