Back in March, there were rumors that Google was developing a gesture-based keyboard app for iOS. Fast forward two months and here it is, Gboard, the new gesture-based virtual keyboard from Google for iOS devices. It is actually based on the “now-on-tap” technology that Google introduced with Marshmallow last year.

“Now-on-tap” lets you use the google search engine from any app. To use it, you just have to press and hold the home button to let Google analyze anything you’re using on the screen and then it shows relevant information based on the things it analyzed. For example, if you have any place on the screen and then use Google “now-on-tap”, Google will show you the address and other relevant information for that place.

Gboard is kinda similar in many ways. It places a tiny “G” logo which actually puts the shear-strength and functionality of Google’s search engine right onto your keyboard. See it in action right below –

As you can see, you just press the “G” logo on your keyboard, Google search then prompts up then and there and let you search for anything be it a phone number, be it a text or be it anything else and then you can just paste the relevant information and send it to whom you want. It replaces the pain of “firing up another up-then copy from there-then open the previous app to send it” to just a simple tap.

Oh boy, did I forgot to tell you about the gif search? You can just touch the “G” logo, search for a gif and then you can send it back to the recipient within a moment. That is awesome, right? Actually there’s more, you can also gesture-type (Google calls this glide-typing) by sliding your fingers over the keyboard. And you can even search for emoji right from the keyboard. 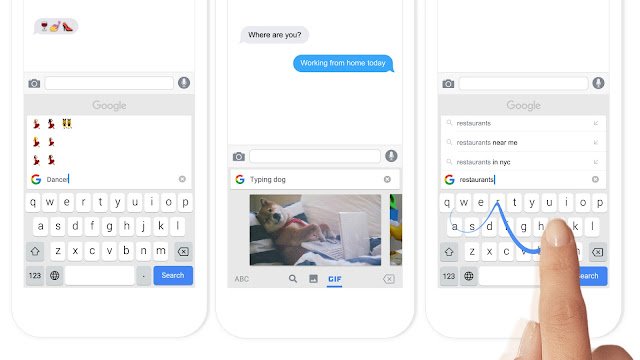 Right now it is available in the App Store only in English language and only for US residents, but Google says that more languages will come later. So we can hope that with other languages, it will become available outside US as well.