Pixel was Google’s first handset that buoyed the company into the league of premium handsets, a segment dominated by the likes of iPhone and Samsung premium lineups. As expected the Pixel got the traction it deserved and scored some brownie points when it comes to the sales aspect. Google has tried hard to draw a line between its predecessor and the Pixel by keeping some of the features like the inbuilt Google Assistant exclusive to the Pixel. 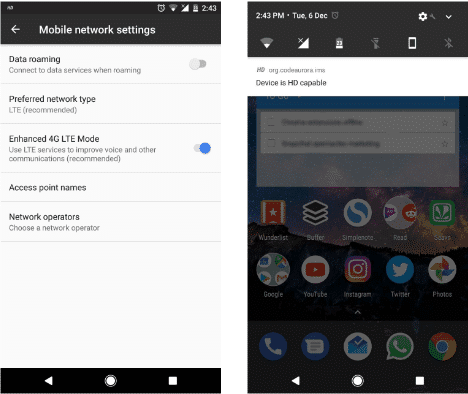 The Pixel has now snagged a new update, Android 7.1.1 and in this update, we were able to spot the support for the Jio VoLTE in India. The Pixel previously didn’t offer VoLTE support in India and this new feature means that one could start making voice calls over LTE. In the Network settings Pixel shows an ‘Enhanced 4G LTE Mode’ which is supposed to let users ‘Use LTE services to improve voice and other communications.’

When we launched Android Nougat, we were excited to deliver even more ways to make Android your own. Today we’re rolling out Android 7.1.1, an update to Nougat that showcases more ways to express yourself, along with a handful of other sweet features and improvements to stability and performance. Android 7.1.1 brings many of the cool features of Pixel to everyone- Agustin Fons, Product Manager, Android.

The Android 7.1.1 brings into effect new Emojis, a feature to send the GIF’s directly from the Keyboard input in certain apps like Google Allo, Google Hangouts, and shortcuts that can be launched directly from the home screen. The new Android Nougat 7.1.1 update comes bundled with the December security updates and is expected to be available across the entire Nexus lineup including Nexus 6, Nexus 5X, Nexus 6P, Nexus 9, Pixel, Pixel XL and Pixel C. The update will be delivered via OTA for all the devices, including the ones enrolled in the Android Beta.

Was this article helpful?
YesNo
TechPP is supported by our audience. We may earn affiliate commissions from buying links on this site.
Read Next
How to Fix Google Chrome Translate Not Working
#google #Google Pixel #Google Pixel XL