Opera has been consistently pushing updates to its desktop browser in a bid to outrun market leaders such as Google’s Chrome. Today, the company has rolled out another significant build which brings quicker access to your messaging conversions on platforms like WhatsApp and a design overhaul which they’ve been testing for quite some time. 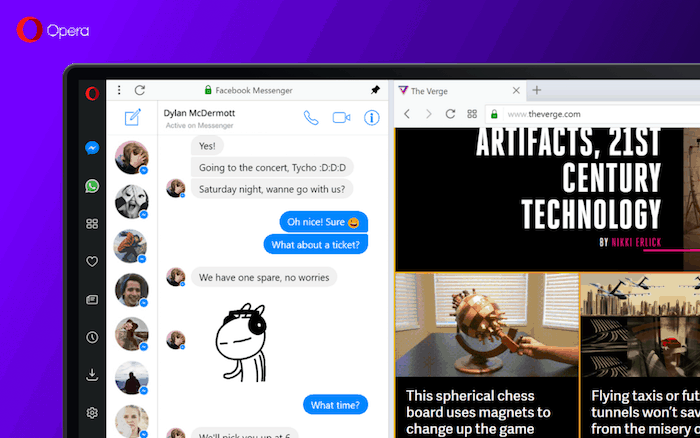 As part of Opera 45, the new update allows you to pin messaging apps to the sidebar and open them with a click of a button. Additionally, you can permanently situate them and multitask between other tabs or windows. Currently, it supports the three leading apps including WhatsApp, Facebook Messenger and Telegram which I think should suffice most users’ needs. The feature is essentially a reformation of the web apps, so you don’t have to login or verify again if you’ve already. If you use more than one messenger, you can easily switch between them by using our shortcut key for quicker access (⌘ + ⇧ + m on macOS, CTRL + SHIFT + m on Windows and Linux).

The other big and apparent change is the cleaner design. Dubbed as “Opera Reborn”, it majorly overhauls various elements like the sidebar, icons, edges, colors and presents a relatively more modern aesthetic which, in my opinion, looks significantly better than its counterparts including Chrome. The update has begun to roll out in the stable channel. In case you haven’t received it automatically yet, head into the “About Opera” page for checking manually.

Furthermore, there’s also a new dark mode that basically applies a black coat to the toolbars. Opera is certainly worth a shot if you’ve frustrated with Chrome’s aggressive resource requirements and on top of that, it comes with a range of features for which you usually have to install extensions like inbuilt VPN, battery saver, data saver and more.

Was this article helpful?
YesNo
TechPP is supported by our audience. We may earn affiliate commissions from buying links on this site.
Read Next
Android Messaging App Not Working? Try These 10 Best Fixes
#Messaging Apps #Opera 45 #Opera Reborn