A year is a long time in the tech world. In 2016, when Xiaomi announced the Mi Mix, it took the world by storm. At a time when smartphones get leaked by the companies themselves, everyone was taken by surprise by the Mi Mix. People rightly called it the “concept phone of your wildest dreams.” At the end of the day, it was just that – a
concept phone – and a pretty one at that. For TEN long years, our brain was conditioned to imagine a smartphone looking a certain way – bezels on all four sides on the front. With the Mix, Xiaomi declared war on the bezels, and the result was jaw-dropping. 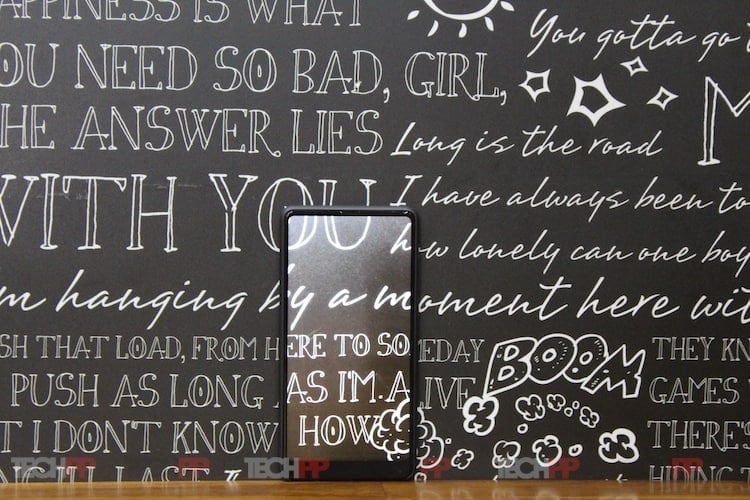 A year later, the sequel is here. And it is no more a concept phone. Xiaomi had enough time to work on whatever limitations that plagued the original Mix and refine the design further on the Mix 2. And it has done just that. Instead of a humongous 6.4-inch display, we have a more manageable 5.99-inch screen and a phone which is almost 24 grams lighter than its predecessor. And more importantly, it fits nicely in the hands. While the original Mix had an odd 17:9 aspect ratio display, the Mix 2 has a more acceptable 18:9 screen. The hugely problematic piezoelectric acoustic driver makes way for a standard earpiece. The camera too gets an upgrade with a big 1.25µm pixel size sensor along with 4-axis OIS. All in all, a proper second gen product which irons out the kinks of the original. 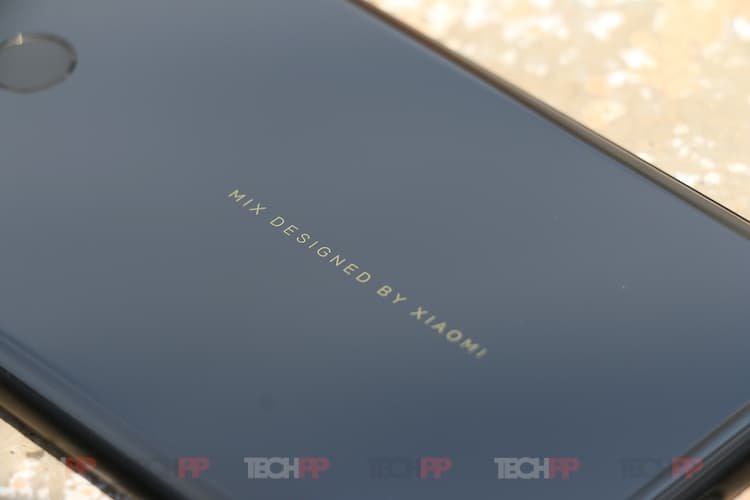 The Mix 2 is no more a concept smartphone. It has ‘premium’ and ‘flagship’ written all over it. The back is carved out of ceramic, while the mid-frame is made of aluminum. Xiaomi has retained the 18-carat gold accent around the camera sensor which is subtle yet beautiful. The sides are curved which make for better hand-feel and better grip. And while the externals are premium and beautiful, the Mix 2 comes with some top-notch hardware internally. It is powered by the latest Snapdragon 835 paired with 6 GB of RAM and 128 GB of ROM (Xiaomi isn’t bringing the 8GB RAM and 64/256GB ROM variants to India). 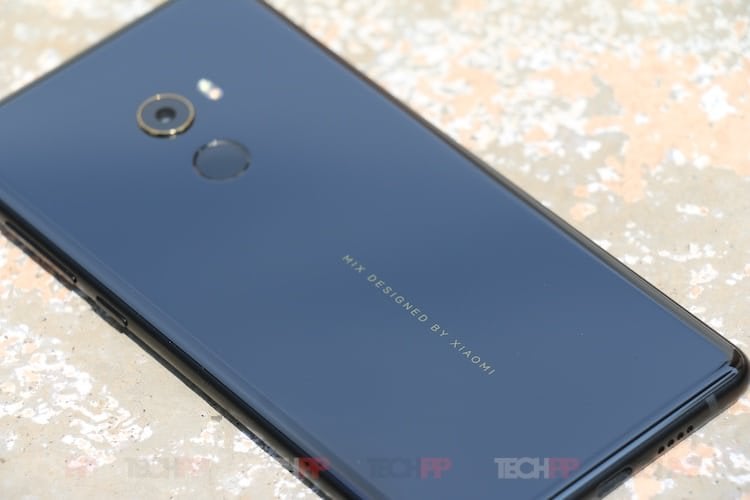 To ensure it is a true flagship, Xiaomi has beefed up other internals as well. The storage is UFS 2.1 which is pretty fast. You get NFC, Bluetooth 5.0, Dual-band 802.11ac WiFi, USB Type-C charging port with Qualcomm Quick Charge 3.0 support, 3400mAh Li-ion battery and most importantly, support for global LTE bands. That’s right. An Android phone which will work in almost every country on the map – a big deal for frequent travelers. 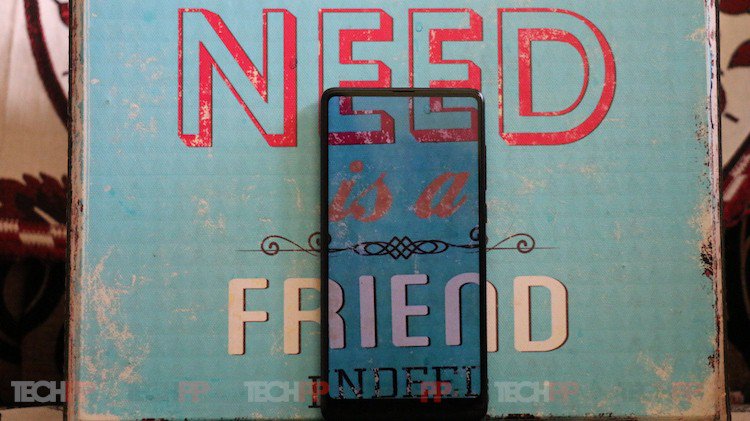 But not everything is hunky-dory. As much as we love the bright 18:9 display, it is still FHD+ (1080x2160px), compared to the 1440 x 2960 which we saw on the Samsung Galaxy Note 8 and S8 Plus. The front camera is stuck at 5.0-megapixels. There are no dual-speakers or support for Hi-fi DAC. And unlike most Xiaomi phones, we do not have an IR blaster or support for FM radio. Oh, and there is no 3.5mm headphone jack as well.

Not just a looker, a top-notch performer too 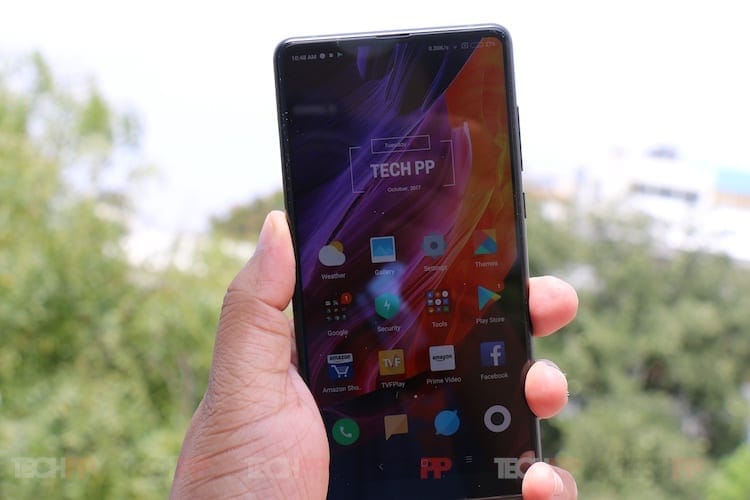 Despite those misses, our overall experience while using Mi Mix 2 was very positive. The immersive screen aside, the performance is top notch. MIUI 9 beta based on Android 7.1.1 was a breeze throughout the 3-week review period. While being a heavy skin over AOSP Android, MIUI 9 retains key features of Android Nougat like split-screen mode. It also feels considerably faster with its transitions, animations and app switching, especially if you are coming from MIUI 8. That said, it continues to disappoint in certain areas like Notification shade. There are no inline replies and actionable notifications, and you still need to do a two-finger swipe down to expand notifications. To put it mildly, the whole notification setup is archaic. Xiaomi users are so used to physical navigation keys, but as you would expect, the Mix 2 has just the on-screen buttons, which thankfully can be mirrored as per your preference. In our nearly month-long usage, we ended up using features like Second Space and Dual apps a lot.

Gaming performance is exactly what you would expect from a premium flagship device running the latest and greatest CPU+GPU from Qualcomm. While it is snappy and the graphics look immersive, we would have loved better loudspeaker output. And no, there were no heating issues. At all. The 3400mAh battery lasted for a day and a half on medium-heavy usage which is great for a flagship. It is not often that we stress on the actual calling ability, but the original Mix was notorious for the same due to the use of a Piezoelectric acoustic driver. Thankfully, Xiaomi has sacrificed some space for a proper speaker this time around, and it works very well indeed.

Ironing out the camera rough spot…somewhat! 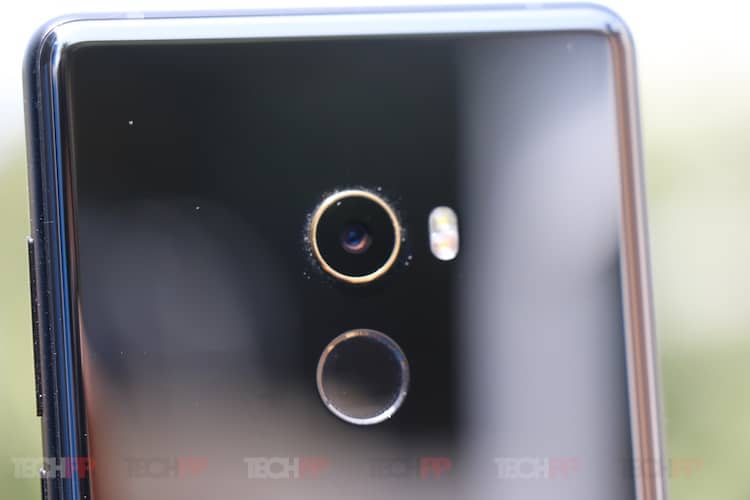 The original Mix took a lot of flak for housing mediocre camera hardware – the camera sensor was very similar to the one we saw on the mid-range Mi Max. The new Mix 2 misses out on dual cameras (due to lack of space, we hear) but manages to house a bigger 1.25µm pixel size sensor with 4-axis OIS. This is similar to the primary 12-megapixel camera (Sony IMX386) found on the Mi 6 but with a bigger aperture of f/2.0. And the results bear this out. The camera supports 4K Video recording at 30fps and slow-motion videos at 120fps.

The Mix 2 camera managed to wow us multiple times during our usage. The color reproduction is good, and the low light performance is adequate as well. But the point is that it is adequate, but not jaw-dropping as most of the flagship cameras are these days. Smartphones like Google Pixel, iPhone 8 and Galaxy S8 have shown that one does not always need dual cameras to take good pictures under all lighting conditions, but the Mix 2 is simply not there yet. It loses out on details when the light goes down. It also lacks auto-HDR which is almost a standard these days. All of which means it remains a bit of an Achilles heel. 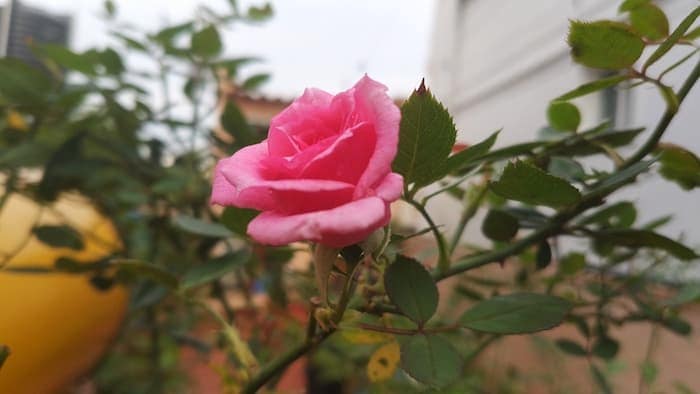 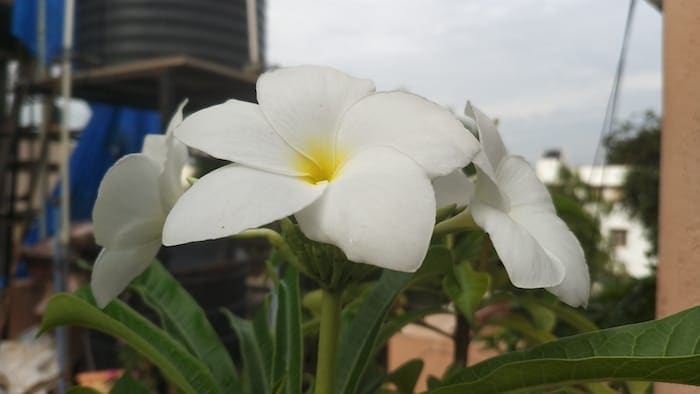 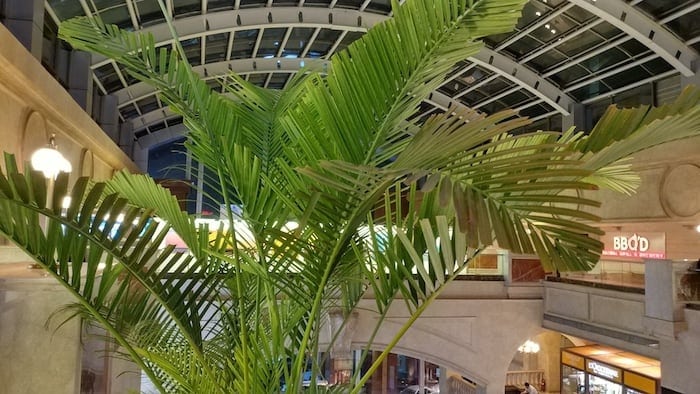 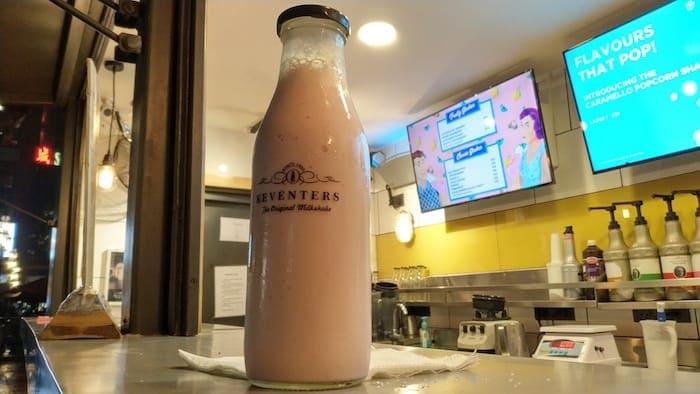 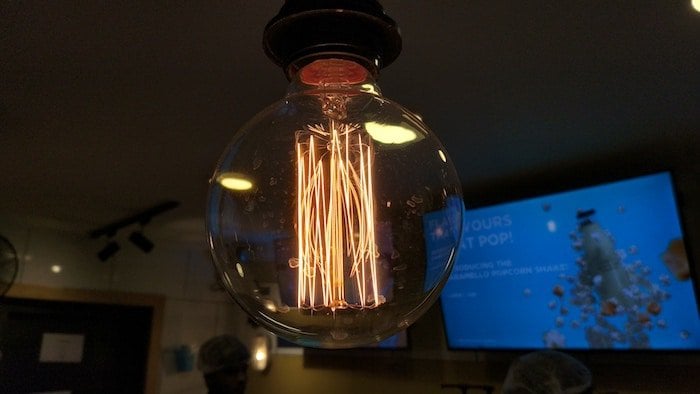 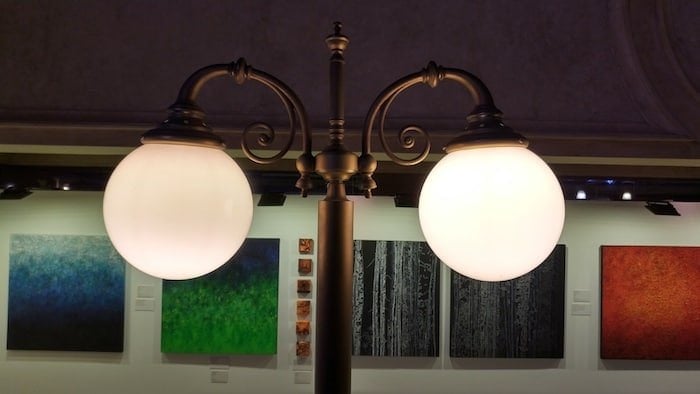 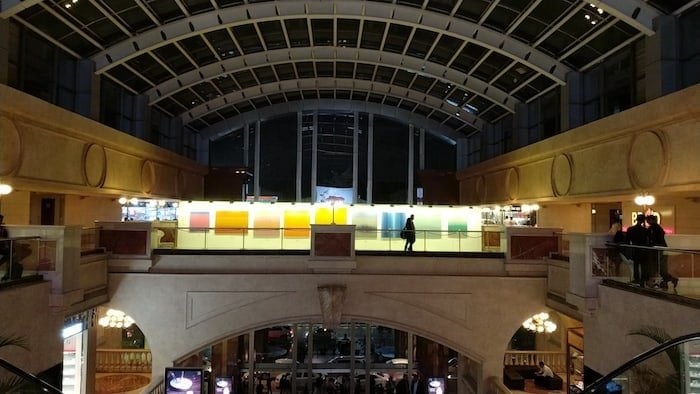 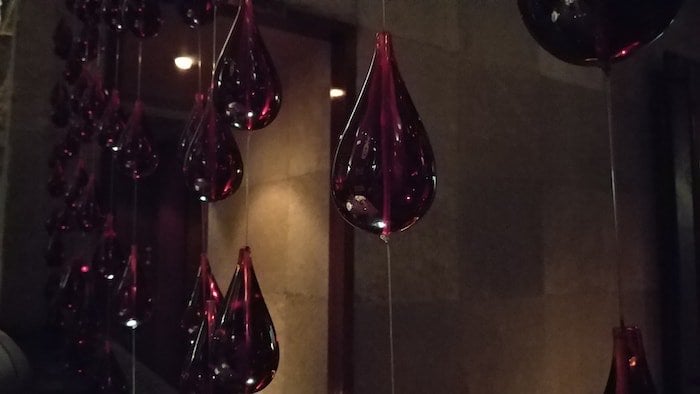 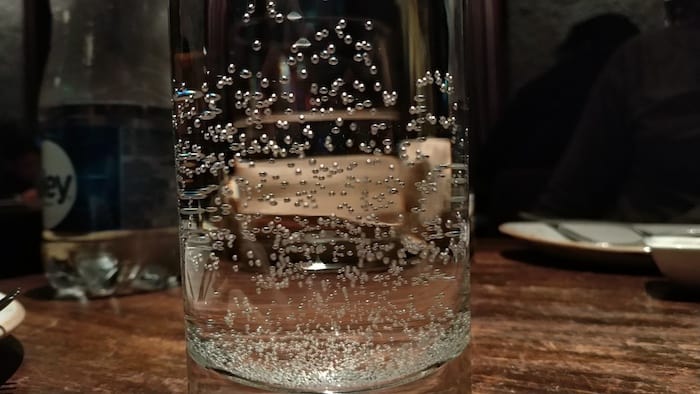 We can’t help but wonder why Xiaomi chose the Mi Mix 2 instead of, say, the Mi 6 or the Mi Note 3 to launch in India. For a company which has no smartphone over Rs 16000 in India, launching something which costs more than double its current highest-priced phone seems risky. But it’s high time Xiaomi come out of the ‘Redmi’ aura and show the people the best it can offer, albeit for a higher price. The Mix series perfectly showcases the jump Xiaomi has made from just being “China’s Apple” to a truly innovative global company. 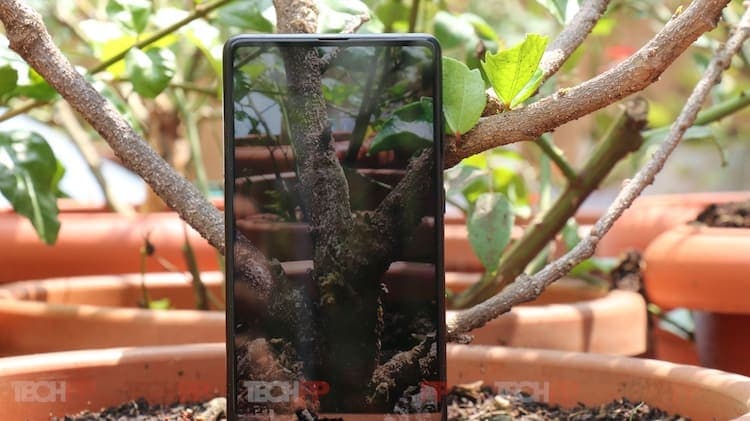 The Mix 2 has evolved from a crazy concept phone to a usable flagship phone. The all-screen front will ensure it stands out in the crowd. The ceramic back and the 18K-carat golden rim around the camera will ensure the phone looks premium. The Snapdragon 835 paired to 6GB of RAM will ensure you have a snappy experience throughout. The support for global LTE bands ensures one can use the Mix 2 no matter where they reside (you can purchase it from e-retailers like Gearbest and Aliexpress if you are not from China or India). If you can live with some obvious shortcomings in MIUI 9 and an average camera (by modern flagship standards), the Xiaomi Mi Mix 2 has a lot to offer for ~$550 even after the vanity factor of bezel-less display wears off in the near future. For now, Xiaomi has blended all that style with a great deal of substance.

Was this article helpful?
YesNo
TechPP is supported by our audience. We may earn affiliate commissions from buying links on this site.
Read Next
iQOO 11 5G Review: Does It End Your Quest for the Ultimate Smartphone?
#Mi MIX 2 #review #xiaomi