The Honor vs. OnePlus battle has been one of the fascinating tussles in the “affordable flagship” segment in recent times. After the OnePlus 3 vs. Honor 8, OnePlus 5 vs. Honor 8 Pro, we now have the OnePlus 5T vs. the Honor View 10. Both devices come with very good, flagship-level hardware at relatively affordable price tags. And while both have their share of highlights, cameras are key features in both. Which is why we decided to let the cameras on both the phones go head to head with each other, and figure out which one(s) worked better. 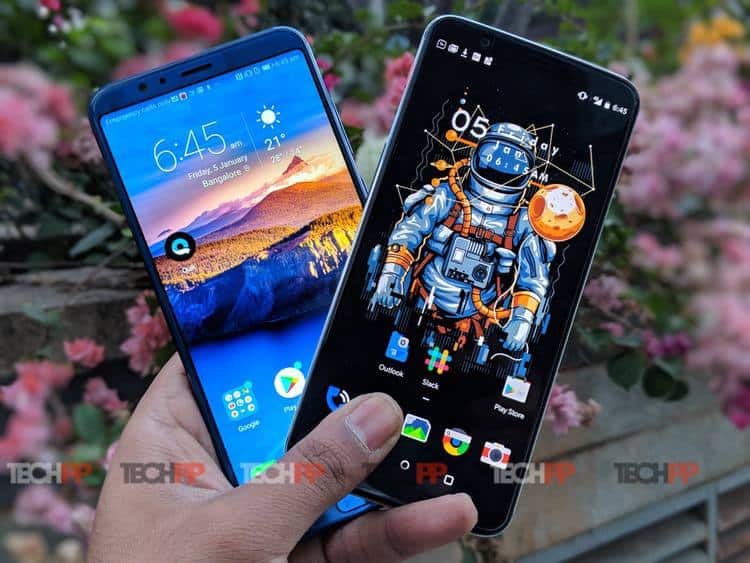 As always, we have gone with auto mode on all the shots, as that is the mode in which most consumers use their devices. We would advise you to take a look at the full resolution shots of the images we have used (just click on them – it is that simple) to get a better idea.

Let’s get the hardware part of the camera out of the way!

The camera app on the Oxygen OS on the OnePlus 5T is minimalistic, quick to launch and reliable all through. We experienced no crashes or glitches. There is one change from what we saw on the 5. The set of options now come in a page that can be opened, by a swipe up on the up arrow key, right above the shutter icon. The EMUI 8 on the View 10 has lots of AI elements in it and the camera app gets its share too. Loaded with lots of options from filters to modes, the camera app almost ensures you will not need another camera app if you are looking for variety. Honor claims that the software is powered by AI that lets it recognize 13 different scenarios and adjust output accordingly, in addition to the motion detection to capture fast moving objects.

Both the phones are quick to focus and process the images. Pictures from the 5T are more natural while the ones from the View 10 tend to be shifting from slightly artificial (saturated) to obviously artificial in one-off situations. The 5T’s images are slightly sharper and zooming into images reveals this. The 5T handles light better than the View 10 – check the sun flare image to see what we are talking about. It boils down to what you prefer – natural colors vs punchy ones. The 5T wins this by a small margin.

The View 10 tends to bump up the ISO, thus producing brighter images but this means it also introduces more noise. The 5T handles light better here as well, but the View 10 is not trailing by much. In fact, the processing speed in low light is faster on the View 10. Both cameras produce above average images and the View 10 images are slightly noisier than the ones from 5T in very low light conditions. The HDR mode is more aggressive on the View 10 and at times, the pictures look more artificial – not necessarily bad as many actually love this.

Given that that 5T has a bigger aperture, if one were to compare both side-by-side and observe keenly, the pictures reveal a better background blur on the 5T. To the naked eye, both the phones produce good macro images and are good to lock the focus as well. 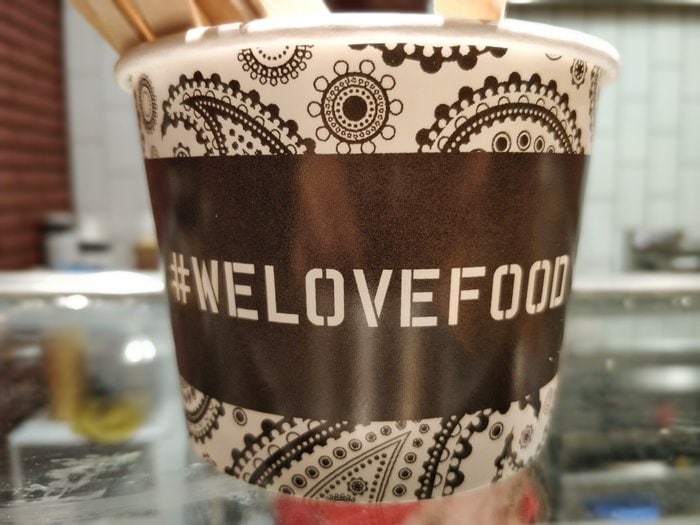 The 5T has come a long way from the 5 in terms of bokeh/portrait mode. Both of its dual cameras having the same aperture (and a big one that) means there is no focus hunting as before, to get the portraits right. The View 10 too has the portrait mode with an added advantage of controlling the blur during post-processing. Portraits from both the phones come out well in daylight, but do not expect an error-free output. There are tiny overshoots and undercuts but nothing that is too obvious, at least most of the times.

Images from both the cameras come out well but this is one area where the View 10 knocks the ball out of the park. A wider frame and a brilliant portrait mode and better dynamic range and white balance – these are more than enough to beat the 5T which has a higher megapixel count. The front camera does 1080 videos and do pretty good.

Both the cameras are capable of shooting up to 4K resolution. While the output in terms of sharpness, dynamic range, color reproduction is more or less the same, the 5T has an edge when it comes to stability and smoothness, thanks to its EIS. This EIS is one of the best we have seen, though not in the class of the iPhones and Pixels, but surely worth its price in the category amongst the competition. Both phones shoot slow motion at 120 fps and have a similar output as well.

If you are looking for lots of shooting options, then the View 10 is likely to appeal to you. The Monochrome mode is a brilliant piece of work, and having a dedicated sensor is much better than simply having a monochrome filter. There is the Live image mode that captures a 2-4 second clip and can be used as gifs for entertainment. This can get really addictive. Augmented Reality is gaining popularity and EMUI has a fair bit of AI in it. You can turn yourself into a cat or a rabbit or also transport yourself to a different place with the AR option. This may not be everyone’s cup of tea (certainly not ours!), but there is a huge segment of users who use this very often, especially for those Instagram shares. While the stickers work fine, the background option is a hit or a miss – good fun when it works right. The filters and artist mode lets you try a lot of tints in your clicks and also mimic Prima-like effects. If these were not enough, there are lots of modes ranging from Panorama to Long Exposure, from 3D Panorama to Pro mode and they all work just fine. 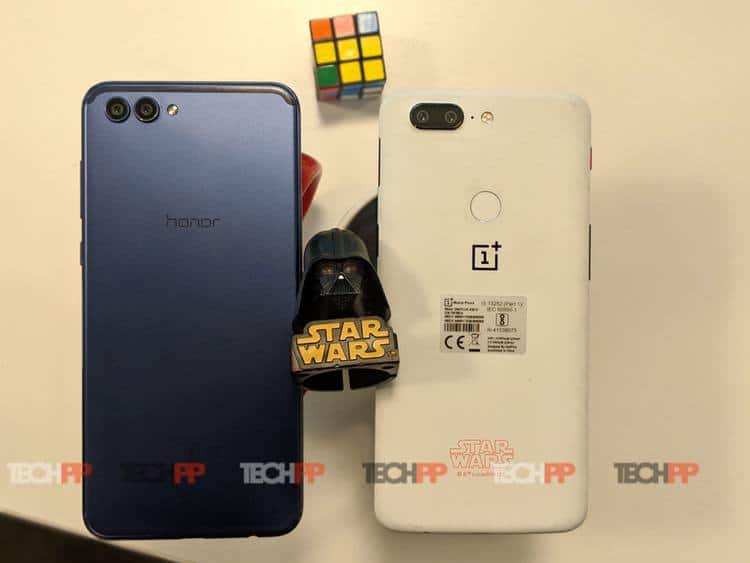 The 5T, on the other hand, sticks to being minimalistic with just the Pro Mode (which is the better one of the two), Panorama and Portrait. There is a 2X zoom feature, but unlike the 5 that had 2x optical zoom, it is all digital here (as in the View 10) – no different from you pinching out on the camera app before making the click. Pictures taken via the 2x zoom have a severe loss in sharpness and lots of noise. This is one area where we are totally disappointed with OnePlus 5T as it is a downgrade in the Zoom department as compared to its predecessor.

Verdict: What do you need? 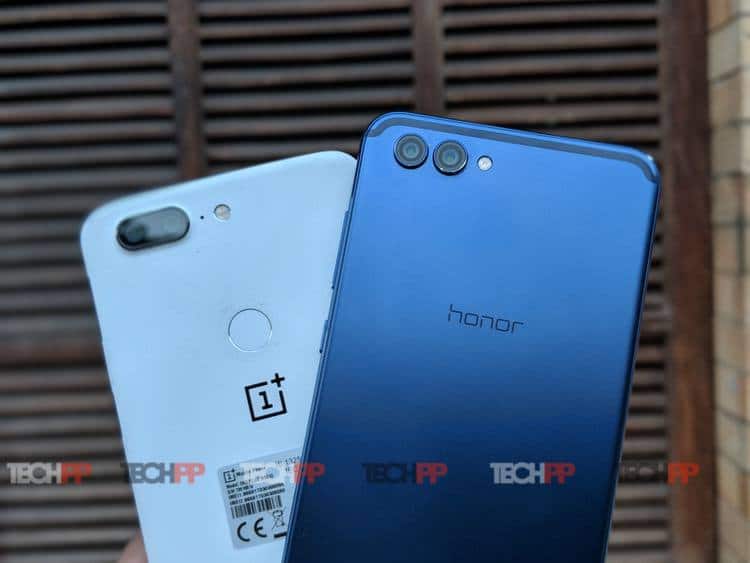 Both the phones have dual cameras. While the 5T uses it for bokeh and low light excellence, the View 10 uses it for depth information and monochromes. Both the cameras excel in their pursuit and are very close to each other in terms of the output. Neither phone will disappoint you unless you want to go about nitpicking. While the 5T has better video shooting abilities, the View 10’s selfies are one among the best we have seen with portrait mode as well. And if you are someone who wants tons of options via modes then the View 10 is the one that will make you happy. But if you prefer the finesse of the pro-mode, the 5T does better there. There is no clear winner here, it is one of those cases where you pick the phone based on what you are looking for.

Was this article helpful?
YesNo
TechPP is supported by our audience. We may earn affiliate commissions from buying links on this site.
Read Next
Snapdragon 782G vs Snapdragon 778G Plus: What Has Changed?
#Camera Face-off #comparison #Honor #Honor V10 #Honor View 10 #oneplus #OnePlus 5T #Photography