Euthanasia, the process of intentionally ending a human life to ease the suffering has been one of the most debated topic globally (especially so in the west). Terminally ill patients who are suffering in a vegetative state and have no chances of recovery can opt for the Euthanasia (prior written directive is required). The very process of Euthanasia is referred to by many names, the Dutch prefer to call it “assisted suicide” while the British House of Lords Select Committee on Medical puts it as follows “termination of life by a doctor at the request of a patient.” 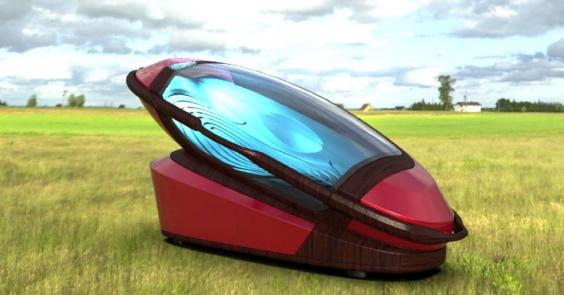 Dr. Philip Nitschke who calls himself as an activist for “voluntary euthanasia and rational suicide” has announced that he is close to finalizing a machine that will use Nitrogen gas to cause death. This device is aimed at offering an option to people who are suffering from illness, an option wherein they could die peacefully without any assistance. According to the Doctor, this way the patient will die peacefully with dignity.

The Machine is called “Sacro” and it works by filling the capsule part with nitrogen which in turn induces hypoxic death. This way the patient will die without discomfort and will be able to end their lives peacefully. After the hypoxiation process is completed, the biodegradable capsule can be detached from the machine’s base and will double up as a coffin for the deceased.

As expected, Dr. Nitschke’s Sacro has sparked debates across the aisle. While it might be a way of inducing peaceful death, the very idea of using a capsule filled with gas has stoked controversy. The doctor himself agrees, he says that “Gas may never be an acceptable method for assisted suicide in Europe due to the negative connotations of the Holocaust.” Meanwhile, some people have taken a step forward and have referred to the Sacro as a “glorified gas chamber.”

The Sacro was demoed with the help of a Virtual Reality experience at the recent Annual Funeral Expo that was held in Amsterdam. Needless to say, this has got the Church worried and Jeroen Kramer, the President of the Westerkerk Church board was quoted as follows “Westerkerk will never support people by offering equipment as promoted by Dr. Nitschke and we seriously wonder whether this contributes to a thorough and careful discussion around this issue.”

As of now, Assisted Suicide is usually carried out by the push of a switch or a press of a lever. This method proves futile as most of the people seeking out for assisted suicide are physically incapable. That being said, this also shapes up as a potential moral issue for a third person who is designated to operate the machine. All of these issues will be solved with the Sacro machine since it will allow the patients to fire up the process with the blink of an eye.

That apart, Sacro is also intended to open up a debate about life and death. The VR experience will allow people to experience their own death. With this in place, the makers of the machine aimed at encouraging people to address the issue of death and issues without being affected by emotional apprehensions.

The set of an advance written directive given by the people is crucial to the process of Euthanasia. The instructions will act as a living will and will allow for passive euthanasia. In India, the Supreme Court has recently ruled that the “Right to Die with Dignity” is an addendum to the “Right to live with Dignity” and thus has made it a fundamental right.

TechPP is supported by our audience. We may earn affiliate commissions from buying links on this site.
Read Next
Technology Companies Need to Stop Treating User Privacy as a Second-Class Cit...
#sacro #Technology