When Xiaomi first entered the Indian market, it came with a different approach. Unlike most companies (at that time) that were investing heavily in mainstream advertising and marketing, Xiaomi used some not-so-traditional methods to get to its audience. And the big thing? It worked! But after being the flagbearer for the non-mainstream marketing methods, Xiaomi then seemed to resort to the old school methods of communication. Last year, the company launched the Redmi Y1, a selfie-centric budget-friendly smartphone which was not only advertised heavily but also hired a high profile Bollywood actress, Katrina Kaif to endorse. Now the Chinese brand has launched the successor of the Redmi Y1, the Redmi Y2. And the approach remains the same: it is selfie centric and budget friendly. As to just how well it does, let us find out.

Looks better than the Note 5 Pro!

The world of technology is now obsessed with two major things: a tall 18:9 aspect ratio display and set of dual cameras and guess what? The Redmi Y2 brings both to the table. The front of the smartphone is majorly covered by a 5.99-inch HD+ display with an 18:9 aspect ratio and screen resolution of 1440 x 720 pixels. Although the display of the smartphone is fairly bright and responsive, it looked a little washed out to us and the colors did not seem very deep. It may be sporting a tall display but the Y2 also carries some very prominent bezels around it. The one above the display holds the front-facing camera, the earpiece, LED flash and proximity sensor (nope, no notch), while the chin remains bare. There are on-screen buttons for navigation but if you want the full experience, you can easily dump them and can use Xiaomi’s all screen gestures to find your way around. 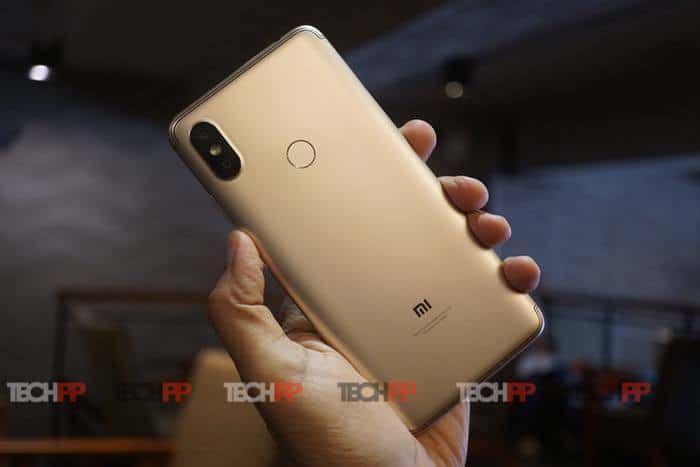 The front of the device may look very basic, but the company has spent some time working on the back. It comes with a high-quality polycarbonate body with brushed metallic finish (we got the gold unit), curves outwards and has a vertically placed capsule-shaped camera unit on the top left, like the ones we have seen on the Redmi Note 5 Pro – and yes, just like it does on that device, the camera unit juts out here as well. If you move a little on the right from there and slightly down south, you will find the slightly recessed circular fingerprint scanner, accented with the same shade but just a tad more shiny. Near the base, the company has placed a shiny, metallic Xiaomi logo. The antenna bands near the top and the base are not regular straight lined antenna bands but curve on the sides. Their presence, we suspect, is largely for aesthetic reasons. 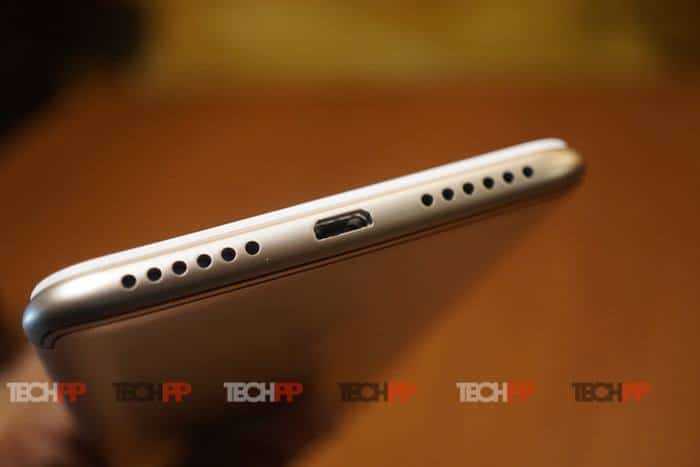 Unlike on the Redmi Note 5 and Note 5 Pro (but a bit like its predecessor, the Y1), the display seemingly protrudes from the frame, something you would realize only when you hold the device in hand – giving the sides a bit of a dual texture, even though it does not affect the “grippiness” of the device. The left side carries the SIM card and microSD card tray (there is a dedicated space for a microSD card – no hybrid SIM slots) whereas the right side carries the volume rockers and the power/lock button. The top of the smartphone houses the 3.5mm audio jack and the infrared port while the base sports the speaker grille and the micro-USB port.

The device measures 160.73 x 77.26 x 8.10 mm and weighs 170 grams. And although the display on the screen is taller than the usual ones, the company has not really done any extra work in minimizing the bezels around the smartphone which helps it land in the big phone zone and makes it a little difficult to be used by a single hand. That said, we think the smartphone still looks better than one of the company’s most popular devices, the Note 5 Pro, thanks to that back. The metal-loving crowd might not feel comfortable with the polycarbonate, but it feels solid enough, although there is no water and dust resistance.

In the performance department, the Redmi Y2 packs good numbers for its price. The smartphone is powered by the good-old Qualcomm Snapdragon 625 processor paired with 3 GB RAM and 32 GB storage expandable up to 256 GB. There is a 4 GB/ 64 GB version available as well. 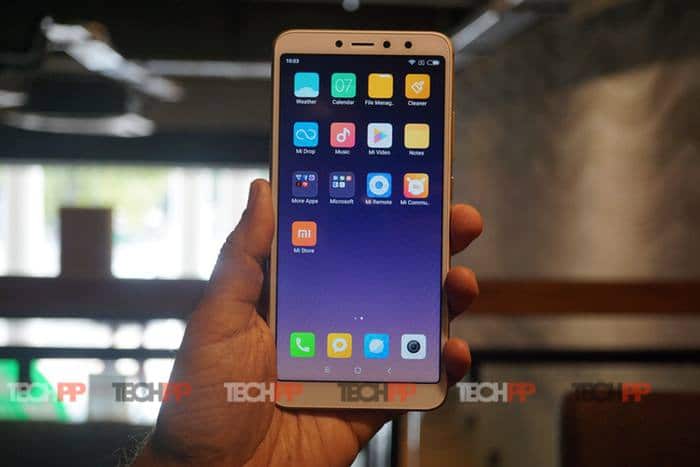 We had no problems while jumping from one application to another and multitasking on the device was absolutely glitch-free. The smartphone also breezed through all our routine day to day business. From social media to texting, to scrolling through general apps, the device moved smoothly, although there were times when a few apps like Google Drive crashed abruptly. The Y2 was a generally good performer in the casual gaming department as well. We tried games like Subway Surfer, Temple Run 2 on the smartphone and the experience remained smooth. But a few lags appeared once we entered the high-end gaming zone. We played games like NFS No Limits and Asphalt Xtreme and the stutters started to show. And while the frequency of the lags was not very high, Asphalt Xtreme did crash a couple of times. A gaming beast this is. Not. 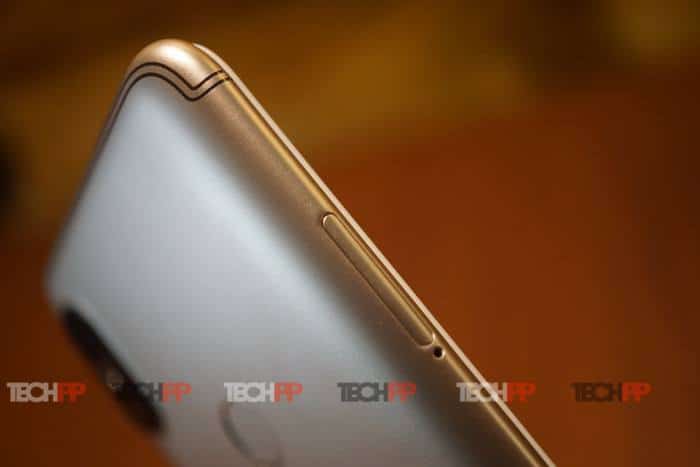 The audio on the Y2 is pretty decent as well. The speaker is not super clear or loud but is definitely good for its price. The smartphone also comes with a Face Unlock feature which works very well. It unlocks the device at almost all times and unlike some (even high-end) devices that unlock even when your eyes are closed, the Y2 asks you to open eyes a bit wider in order to unlock the device when your eyes are shut. The camera does take a few seconds to load while registering the face data, though. Interestingly, the camera app drew different reactions – some of us had a relatively smooth experience, but others experienced a lot of lag at different times. Perhaps a software fix is the need of the hour. The fingerprint scanner works very well and is pretty accurate and super fast. The call quality on the device scores well and we did not face any abrupt call drop issues during our review. 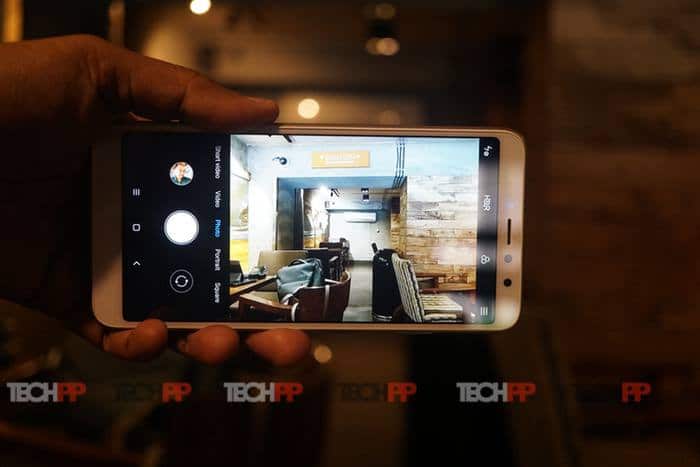 In terms of performance, Xiaomi has definitely paired both hardware and software muscle in the Y2’s cameras. And unlike the Y1, which was mainly about the selfie camera, here the rear cameras actually steal the show. The smartphone performs impressively while taking pictures outdoors. The colors captured in sufficient light are generally very close to the true colors of the real setting. The device scores well in the detail segments as well as it captures a good amount of detail, especially in good lighting conditions. The smartphone takes good landscape pictures but takes even better close-ups or portrait pictures in terms of both color and details. You might have to adjust your distance from the subject while taking close-ups as the phone struggles to focus on the subject straight away but once you figure that out, it becomes a cake walk, and the results are worth the effort. While the smartphone does portrait images well even in normal mode, the Portrait mode on the device is the cherry on the cake. You might feel it is not doing its job well initially while viewing your image through the viewfinder but once it lands in the gallery and takes that split second it needs to load, the results are very good. The edges of the subject are well defined and the bokeh is deep. Yes, it can be a little off sometimes but this more than often bang on. Perhaps this is the magic of the AI as the company claims it works behind the scenes to separate the foreground from the background.

(Note: Click here for full resolution pictures of the samples shared below.) 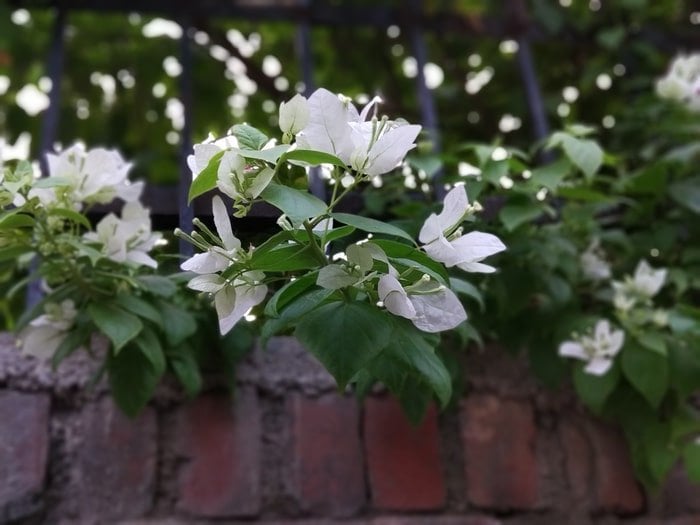 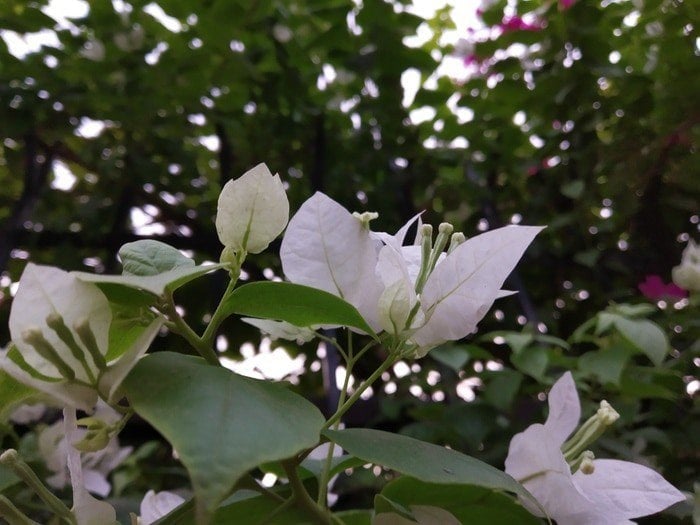 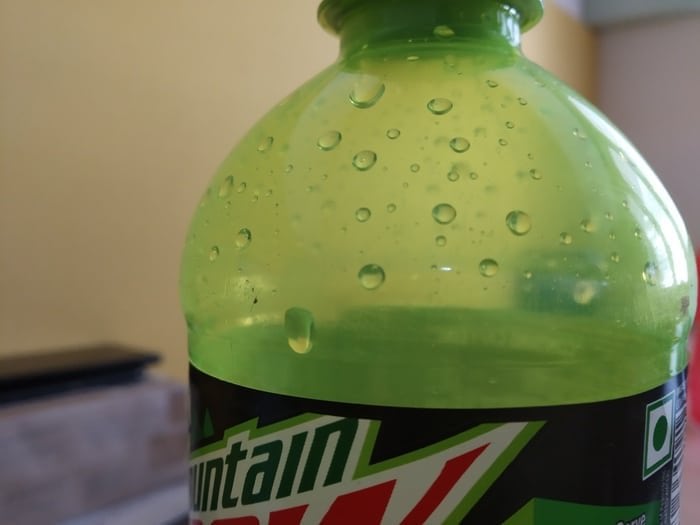 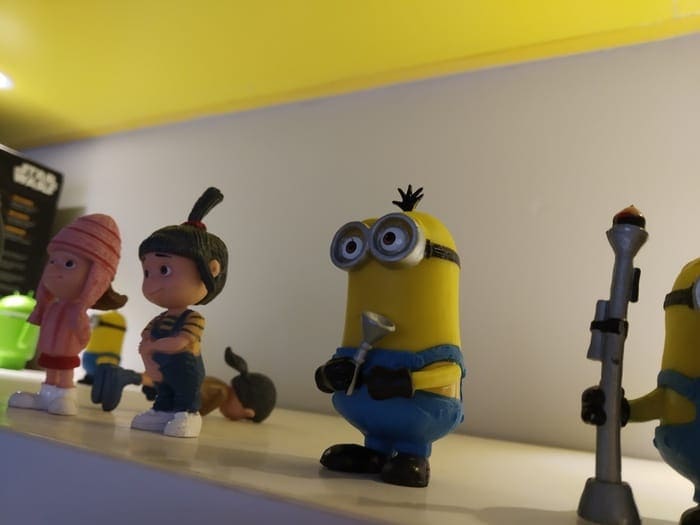 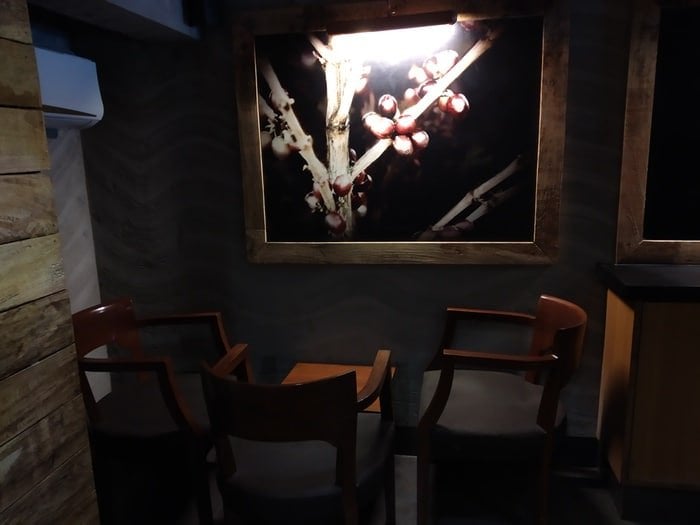 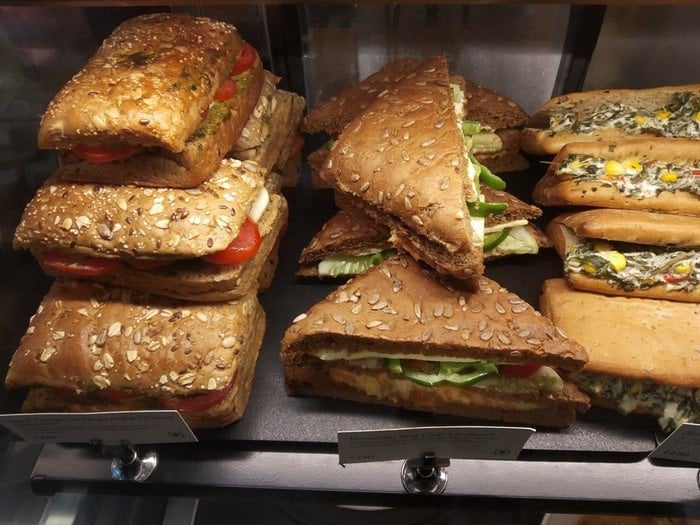 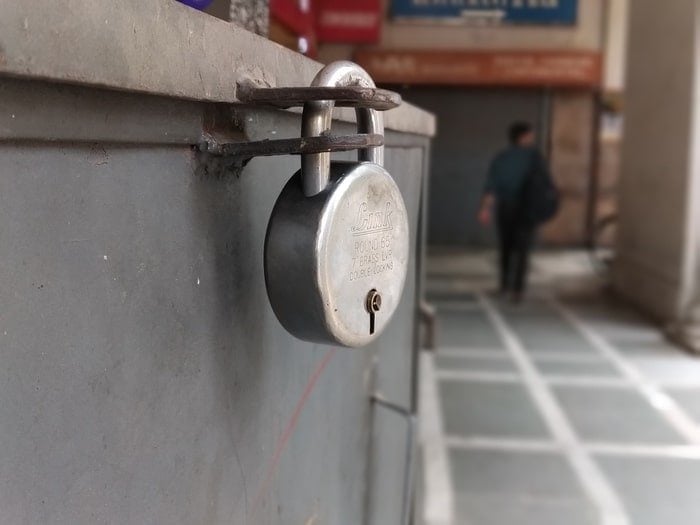 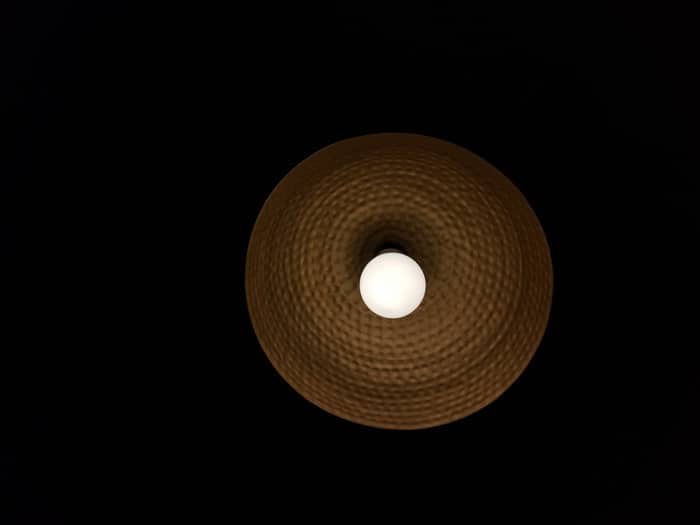 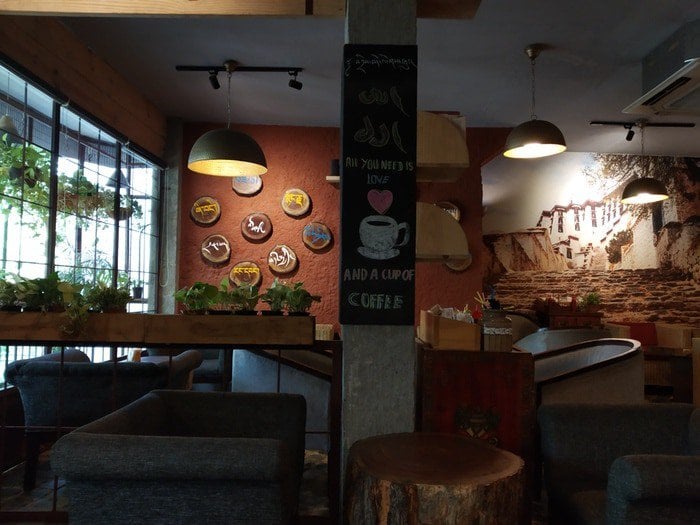 That said, the smartphone struggles to take images of moving objects and cannot handle glare very well either. Zooming in also invites a lot of noise. Another problem that we faced with the Y2’s camera was that although the smartphone produced great colors when a picture was taken outdoors, when inside, the colors produced were often on the warmer side.

Moving on to the front facing camera which is one of the USPs of the smartphone— the 16-megapixel camera did not disappoint us but it did not excite us either. It produces passable selfies that have a bit of detail but like many selfie cameras in this price bracket, the camera on the Y2 also has a tendency to soften up lines and marks, even with beauty mode off. That said, the depth effect mode of the front camera works exceptionally well and definitely helps the subject stand out by blurring out the background well. Yes, it is a good selfie camera but we were more impressed by its siblings on the rear. 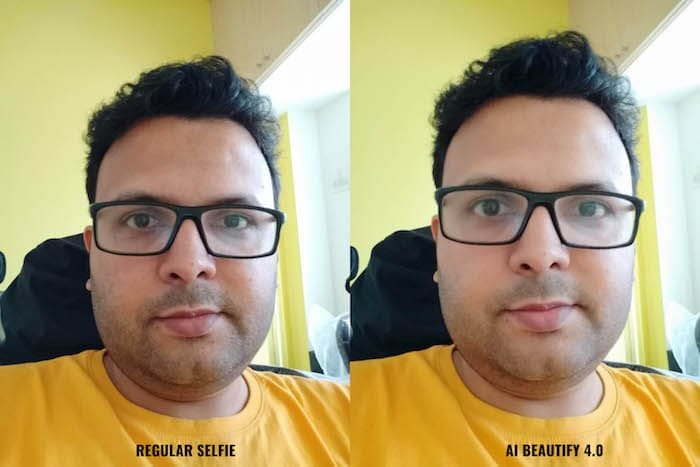 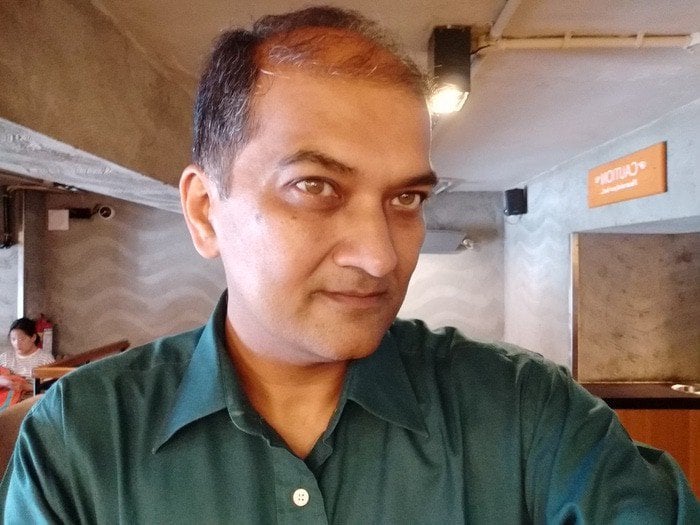 The camera UI is also loaded with filters and modes, thanks to Xiaomi’s in-house MIUI. It comes with various modes like Portrait, Square, Short, Panorama amongst others but still remains largely uncomplicated.

The Redmi Y2 is powered by a 3,000 mAh battery, which can easily see off a day of heavy-duty work. But if you decide to just throw the usual social networking, texting, photography, and multitasking at the device, it will easily last for a day and a half. Impressive for a 3,000 mAh phone with an 18:9 display? Well, a lot the credit for that goes to the Snapdragon 625 processor. Some might consider it to be an old chip but its power management skills are pretty well known. A bit of credit also goes to the HD+ display which obviously drains lesser battery as compared to what full HD+ display would. 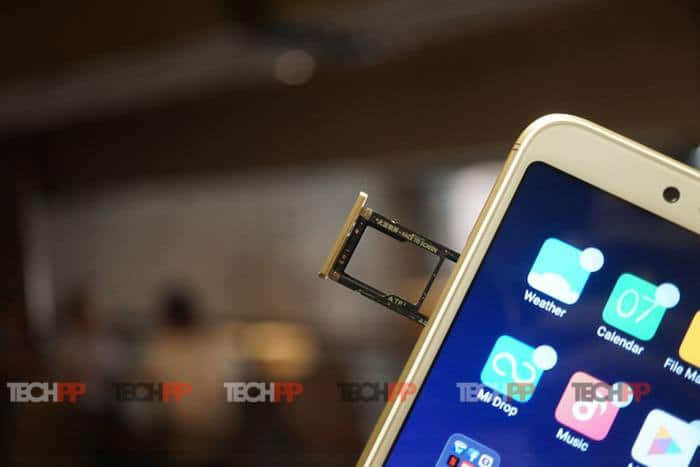 On the UI front, the Redmi Y2 runs on Android 8.1.0 topped with Xiaomi’s MIUI 9.5. MIUI 9.5 is generally smooth and the smartphone feels snappy enough. The UI is clean and uncomplicated. The phone is loaded with Xiaomi’s apps and there are a few third party apps preloaded on the smartphone (PhonePe, Facebook, Amazon, Netflix and Microsoft Office apps) but because they are all segmented well, and the UI does not feel claustrophobic or intimidating.

Can sail smoothly even against tough competition 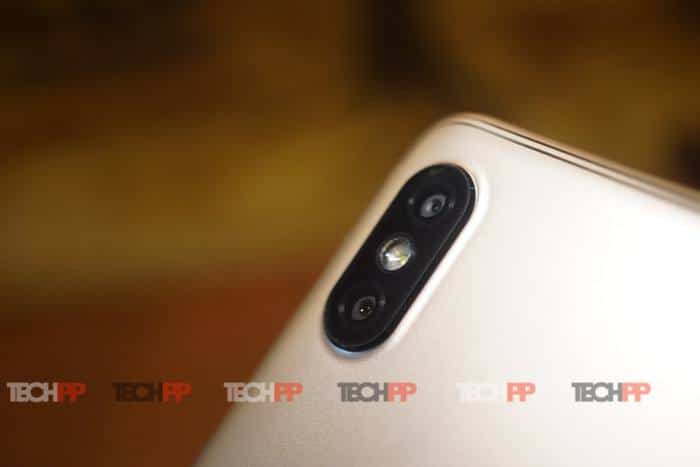 At Rs 9,999 for the 3 GB/ 32 GB variant (and Rs 12,999 for the 4 GB/ 64 GB one), the Redmi Y2 positions itself as one of the most affordable selfie centric smartphones around but actually comes across as a very good all-rounder. The smartphone ticks all the important boxes — good design, commendable cameras, decent battery life and generally smooth performance, and delivers all of these at a price that is in best Xiaomi tradition, very pocket-friendly. Yes, it faces a lot competition from the likes of the recently released Honor 7A, Honor 7C, newcomers like Mobiistar XQ Dual and Realme 1, and not to forget its own cousin the Redmi Note 5 which offers a higher resolution display and bigger battery at the same price, but the Redmi Y2 definitely seems capable of taking them on, if not beating them. Its selfie camera might be in the limelight, but make no mistake, there is much more to the Y2 than just selfie snaps.

Was this article helpful?
YesNo
TechPP is supported by our audience. We may earn affiliate commissions from buying links on this site.
Read Next
iQOO 11 5G Review: Does It End Your Quest for the Ultimate Smartphone?
#Redmi Y2 #review #xiaomi #Xiaomi Redmi Y2