The smartphone market, as predicted by analysts, fell short of estimates and yet again faced a decline in the second quarter of 2018. Reports by IDC and CounterPoint suggest the numbers plummeted by nearly two percent as compared to the same period last year. However, there are still a few surprises and positive news for phone makers. Here are five takeaways from Q2, 2018 results. 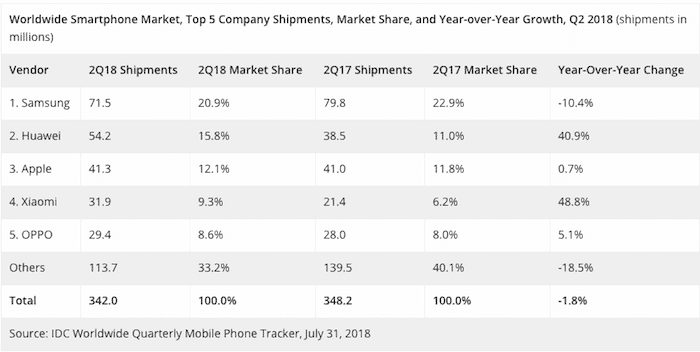 The smartphone industry continues to suffer from a market slump with an annual decline of 2%. A total of 342 million units were shipped globally compared to 348 in the same period last year. The plunge marks the third time the market has dropped year-over-year and the fourth quarter of decline in history.

2. Apple Slips to the Third Position

China-based OEM, Huawei has surpassed Apple in Q2, 2018 to claim the runner-up spot behind Samsung. The company sustained a record-quarter with a total market share of about 15% and 52 million shipments. Apple, on the contrary, finished with 12.1% and 41 million units. The reports further revealed that Huawei’s latest P20 series was primarily responsible for the growth especially in the in the $600-$800 price segment. However, analysts predict the Huawei lead won’t last long and Apple is expected to regain the second place in the coming months.

As per CounterPoint Research’s Q2 results, HMD Global and Transsion Holdings’ Tecno have made their way into the top 10 club at the 9th and 10th position respectively. The research firm says both are one of the fastest growing smartphone brands and will continue to rise in the next quarters. Both of them have roughly a market share of 1% and trail by 2% from Lenovo.

One of the revelations of the last quarter’s metrics is the fact that LG is still in the game and ahead of Lenovo which also includes Motorola. With a stake of 3%, the phone maker stands at the 7th spot followed by Lenovo, HMD, and Tecno. While its shipments did decline by 23% annually, the company still managed to ship nearly 10 million units in spite of negative reception on their recent launches.

Xiaomi’s significant progress in India has allowed it to register an annual growth of almost 50%. The company shipped over 31 million units and retained its fourth position globally. Xiaomi’s sales are largely driven by its off-the-charts performance in India where it outpaced Samsung for two quarters.

Was this article helpful?
YesNo
TechPP is supported by our audience. We may earn affiliate commissions from buying links on this site.
Read Next
Stat Stories: Rising or Falling Samsung, Viva Vivo, Steady Xiaomi and others…
#market share #Q2 2018