Furniture rental platform, RentoMojo is expanding its business to smartphones. The website today announced that users can now rent premium phones for short or long periods by paying a monthly fee. The selection currently includes a handful of flagships including the Google Pixel 2, Apple iPhone X, Samsung Galaxy S9, Apple iPhone 8, and the Samsung Galaxy Note 8. In addition, you can also lease a smart home appliance like the Google Home. 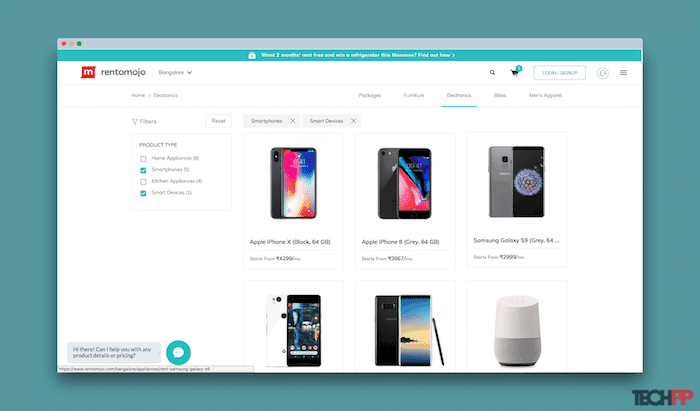 The monthly prices start from Rs 2,099 and go all the way up to Rs 9,299 depending on the smartphone model and for how long you’d want to lease it. There’s also a refundable deposit you need to pay at the time of ordering. There are a total of four periods you can choose from — six, twelve, eighteen or twenty-four months. Once you’re past the subscription spell, RentoMojo also lets you purchase the phone by simply paying the difference.

In addition, the subscription even covers charges of up to Rs 1,000 in case you damage the handset. For now, the service is available only in a couple of cities including Bangalore, Delhi, Gurgaon, Mumbai, and Noida. In the new few months, Rentomojo is planning to expand it to more cities such as Chennai, Hyderabad, and Pune. While the focus right now is on premium products, it is possible more affordable phones will be added soon. Although, pricing in that scenario, will be a challenge. 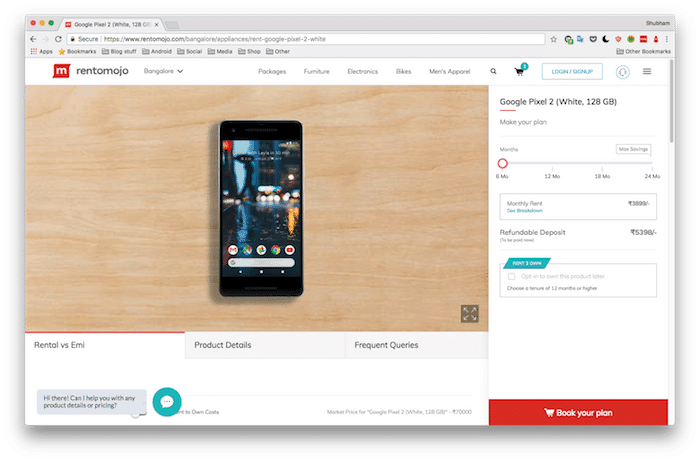 While in some cases, Rentomojo’s prices seem a little exorbitant, it does make sense in a few instances. For example, renting an iPhone X for six months will cost you about Rs 56,000 which is only Rs 25,000 less than the phone’s price. But, on the contrary, if you opt for a Pixel 2, you will have to pay only Rs 24,000 for six months which, especially for someone who constantly prefers switching to new phones, seems ideal and sensible. However, the good news is that you can cancel the subscription anytime since you’re not paying the entire sum upfront.

In a market where fewer than 5 percent of phones sell for more than $450, RentoMojo’s service could prove quite handy for customers looking for a flagship experience on a budget. Hopefully, the startup will extend its offerings in the coming months and introduce more offers to kickstart its new service. There have been a few attempts at smartphone rentals and selling refurbished products in the past but none of them have been able to quite succeed primarily due to the lack of newer models and poor logistics support. RentoMojo, which is already handing rentals for furniture, appliances, and two-wheelers, does have the ability to properly promote and manage this idea. So it will be interesting to see how well it pans out and whether smartphone rentals finally become a mainstream reality in the country.

TechPP is supported by our audience. We may earn affiliate commissions from buying links on this site.
#Rentomojo