AI has been the buzz-word for quite a while now in the tech industry with almost every new device having some or the other Artificial Intelligence capabilities. While AI is mostly marketed heavily on smartphones in recent times, it is far more than just scene recognition on your camera app or optimizing your battery usage. AI can essentially imply a product or a service that helps you perform a particular task with ease by using artificial intelligence, meaning it doesn’t necessarily need human aid and is smart enough to work by itself.

The Obsbot Tail from Remo AI does exactly that. A cute little bot with a rotatable camera which is completely autonomous and can get you some awesome looking shots is what we would like to summarize our Obsbot Tail impressions as. Not sufficient, you say? Let’s delve deeper then, into the AI-powered machine which videographers are undoubtedly going to love!

The essential idea or concept that the Obsbot Tail follows is that it’s aimed to be an autonomous film-making tool, meaning you do not need an extra person to be operating the camera for you while you’re trying to record a clip of yourself. What this effectively means is that you can place the Obsbot wherever you want to and the AI algorithms can track you or your preferred choice of subject and keep it in focus for the desired duration. 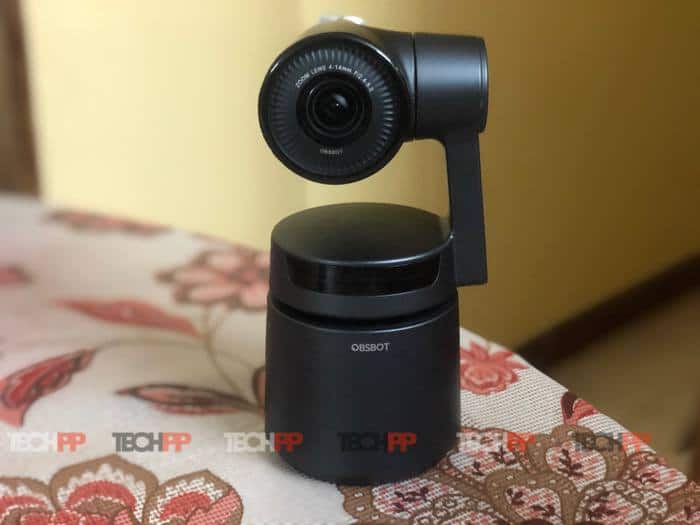 This eliminates the need of having someone to hold the camera for you and move the camera around in the direction you move, that too without any sudden jerks or movements which may result in shaky footage. Instead, what you get is a camera rig stabilized with a 3-axis gimbal ensuring smooth shots.

The Obsbot Tail is relatively small and can fit into your backpack with ease, especially with the foldable design due to which the top portion with the camera can be collapsed for safety when not in use. The construction is solid and it comes in two colors – Red and Black. We have the black variant and it has a matte finish texture which is nice to hold.

The bot itself weighs in at just over 600g which is totally manageable. There are two main parts to the body of the Obsbot Tail – The base which is dense and mostly houses the majority of the electronics, and two, a rotating head with an extended arm housing the camera sensor. The head can rotate 360 degrees to provide a seamless experience.

The base also has a USB Type-C port for charging as well some LED indicators that indicate the battery level as well as the connection status of the Obsbot. There’s also a micro SD card slot on the curved surface area along with the power button. On the underside of the bot, there is a generic tripod mount which will be of immense use to videographers, and there are some metallic contact points, the function/use of which are unknown as of writing this review. Probably, Remo AI has future plans to add accessories to the Obsbot Tail which can be attached using those pins at the bottom. There are some air vents as well to the cool the device down in case of prolonged recording. 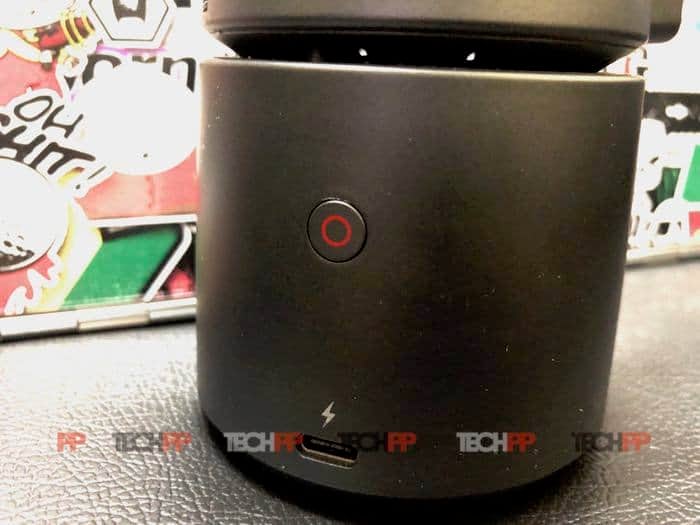 The Obsbot Tail both looks and feels solid, except for the fact that it’s slightly alien-looking while being used, since there aren’t many devices like this out in the public, so expect some stares when you’re out and about recording some crisp B-rolls!

The whole point of getting yourself a bot like this is to take your video quality up by a notch and Obsbot Tail will not disappoint you in this regard. The camera is is a 12MP 1/2.3” Sony CMOS 4-14mm f/2.4-5.0 variable aperture sensor with 3.5x optical zoom capabilities and the ability to record footage in 4K resolution at 60fps which is commendable. That’s basically sharp + smooth footage on the go with Obsbot Tail. The camera head can rotate 360 degrees and it doesn’t lock out which is a huge advantage over some gimbals which do not rotate entirely and lockout after an angle. The onboard gimbal is 3-axis stabilized and does a great job as per the results of our testing. 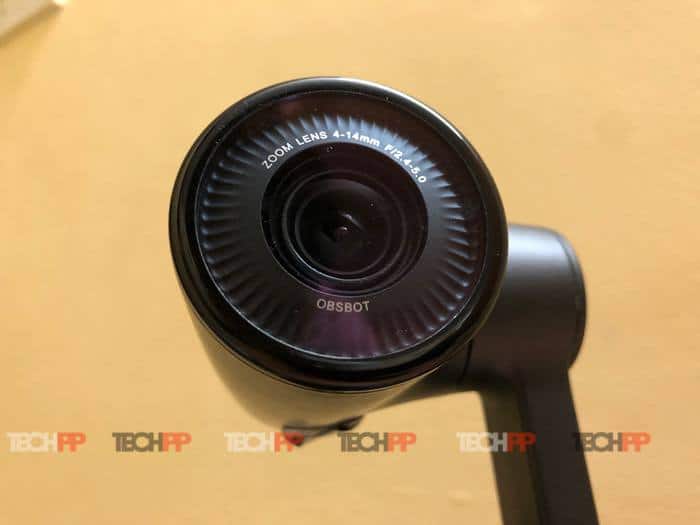 At the heart of the Obsbot Tail is Huawei’s HiSilicon Hi3559A chipset which does all the image processing work and enables the bot to capture images and videos at a faster rate. The SoC is also responsible for the AI performance which includes motion tracking, face tracking gesture control etc.

The below video was shot completely with Obsbot Tail

The performance of the camera in most lighting conditions seemed to be surprisingly good. Videos are well detailed and have accurate colors and the best part of a device like this is that it’s so much fun to play with. Place it on any surface and record yourself doing some fun activities! We’ve actually gone ahead and shot a small montage using the Obsbot Tail to give you a rough idea about what the video quality looks like.

In our testing, features like tap to track and automatic AI motion tracking worked with absolutely no issues and did a great job of keeping the subject in focus. The AI is smart enough to zoom into the subject when far away from the camera which is cool. If you do not wish to us the tracking feature, you can also use the Obsbot Tail as a still camera mounted on a tripod and use the app to pan around. In pitch dark conditions, however, the tracking feature can go for a toss as the subject isn’t clearly visible.

The Obsbot Creator app has a tagline that says “Be your own Director” which is pretty apt given that the Obsbot Tail essentially allows you to go hands-free while recording footage which makes it much easier to record videos by oneself.

The app connects to the Obsbot using its own Wi-Fi network and the connection is quite stable at most times unless your phone is too far away from the bot itself. The UI of the app, however, is slightly cluttered and needs some improvement. There are predefined filters to choose from, along with gestures to enable capture, a timer option, and some settings related to the bot itself. The interesting factor is that you can pan around the camera head by pressing and holding on the viewfinder on the phone and rotating it to whichever direction you want.

The recorded media is stored onto the SD card and is immediately synced to the phone itself, but is only available on the app. To be able to play it on other devices without the app, you will need to first “download” the file onto your internal storage which can be done using the app, after which they will function as any other media files.

A decent experience using the (beta) app, but it can be improved and most probably will be once a public version is officially out.

While the company claims a battery life of 3 hours on a single charge of the 1850mAh cell, we could achieve upwards of 2 hours but the bot then gave up quickly after that so anywhere between 2-2.5 hours is what you should expect. The charging time as well is around 2 hours for a complete top-up using a standard 10W adapter.

Who is the Obsbot Tail for?

The Obsbot Tail is the perfect machine to get if you shoot a lot of videos alone with you as the subject as it gets easier to track and control the functions. It is also a nice purchase for individuals with keen interest in recording sports activities as you can constantly track your favorite player on the field or ground. Or if you are a dancer. 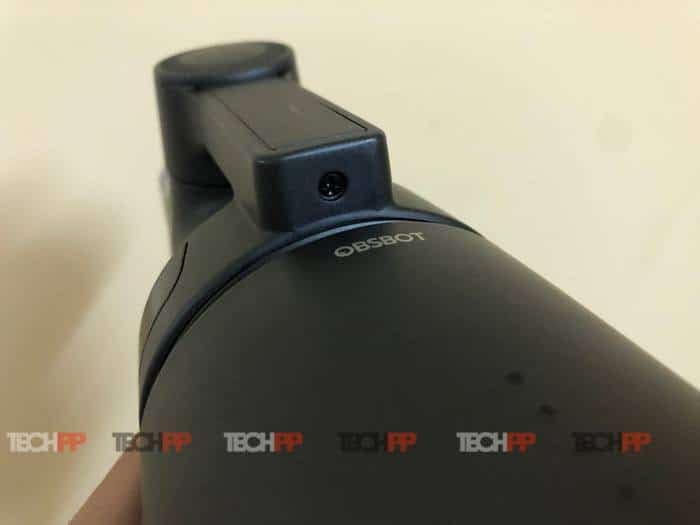 At a retail price of $719, the Obsbot Tail might be a steep ask but is a powerful and efficient tool nonetheless that can make your job a lot easier when used in the right way. However, if you back their Kickstarter campaign, you can get yourself the Obsbot Tail for just about $489 which is a compelling deal given that it is basically a 360 degrees rotatable camera which records some great quality footage.

We should look forward to more products like these as they bring out the true AI capabilities that gadgets possess and can be really helpful in making our lives easier.

Was this article helpful?
YesNo
TechPP is supported by our audience. We may earn affiliate commissions from buying links on this site.
Read Next
Skullcandy Mod Review: Betting on doing the basics well
#AI #Obsbot Tail #Photography #review #youtube