Honor, the sub-brand of Huawei, has today quietly launched its newest mid-range smartphone, the Honor 10i, in Russia. The device has a water-drop notch with around 90% screen-to-body ratio and is similar in specifications with the Nova 4e smartphone, launched in China earlier. Except for a bigger battery, which seems sufficient-enough to easily go through a full day’s use. 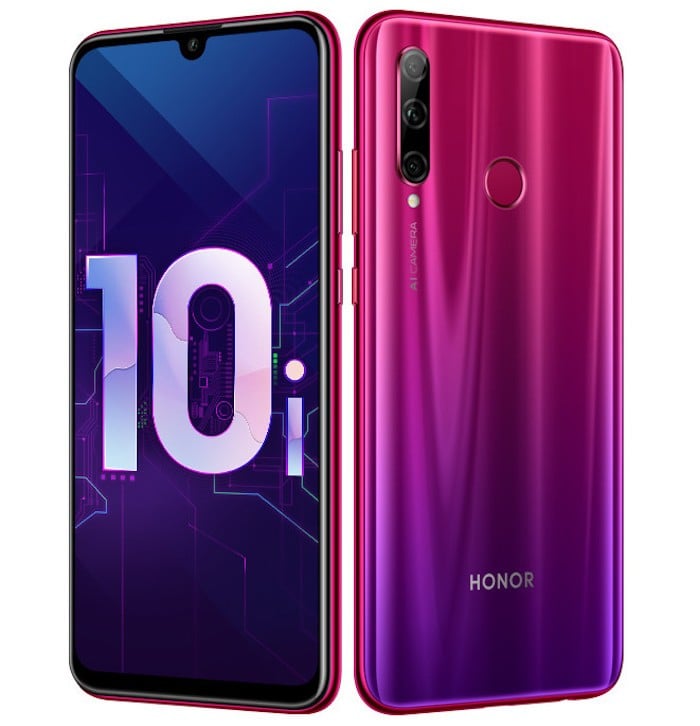 The Honor 10i comes with a 6.21-inch Full-HD+ display with a screen resolution of 2340×1080 pixels, a 19.5:9 aspect ratio, and a water-drop notch at the top. It comes with a gradient finish on the back for the Red and Blue color variants, whereas, a non-gradient 3D finish for the Black color. Under the hood, it is powered by an Octa-Core Kirin 710 12nm-based chipset with ARM Mali-G51 MP4 GPU, paired with 4GB of RAM, and 128GB of internal storage (expandable up to 512GB using a microSD card). In terms of other specifications, the Honor 10i comes with a Hybrid, Nano SIM slot, a fingerprint scanner on the rear, a 3400mAh battery, and runs EMUI 9.0 based on Android 9 Pie.

In the camera department, the Honor 10i sports a triple camera setup on the back, with a 24MP f/1.8 aperture primary sensor, a 2MP f/2.4 aperture secondary sensor, and an 8MP 120-degree ultra-wide sensor. And the front, it has a 32MP for selfies and face recognition.

Honor 10i Pricing and Availability

The Honor 10i comes in three color options: Red, Blue, and Black, with just 4GB + 128GB RAM and internal storage configuration. As of now, there is no word from the company on the pricing of the device. However, with the device being listed on the Huawei’s official Russia website, it is expected that the device would launch soon.