Honorable, but not Exceptional

It has become as predictable as a Tweet from Trump. Every year for the past few, OnePlus has released a device, and hot on its heels Honor has come out with one as well. And so it has been this year as well. Despite the slightly cold wave that has engulfed the relationship of Google and Huawei, the Chinese brand has not stepped away from its collision path with OnePlus. The Honor 20 series is supposed to lay siege to the Never Settler(s), and while the Honor 20 Pro might have got more attention, the Honor 20 (plain, not Pro, not i, not Lite) is the one that is likely to be really getting the volumes for the brand. Honor is a sub-brand that aims to offer relatively high-end specs in a smartphone with an affordable price tag and this is exactly the route that the new Honor 20 has also taken. Bundled with high-end specs at a relatively affordable price, will it be able to take on the budget flagship killer behemoth named OnePlus in the market? 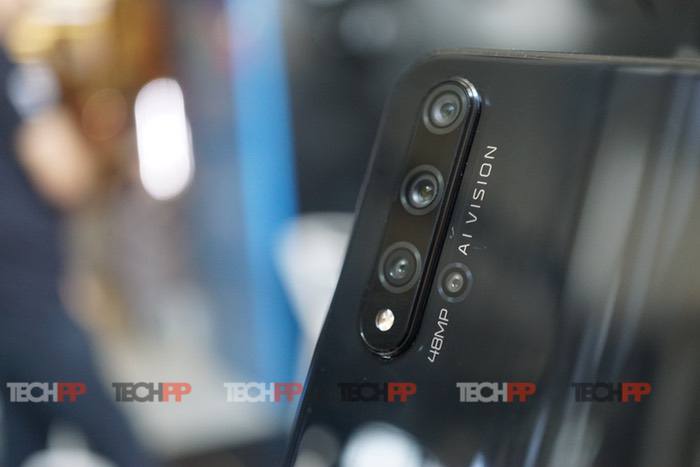 We received the black variant of the smartphone which is very good looking. That said, the Honor 20 lacks the usual Honor vibe or at least the black one does. When you think of Honor, backs with gradient finish or mesmerizing light patterns come to mind. It is one of the brands that has actually been very bold when it comes to design. The electric blue that has now become a crowd favorite has pretty much been the Honor color but the Honor 20 is actually a little subtle as compared to what Honor usually delivers. Do not get us wrong, the Honor 20 looks very smart but misses out on the wow factor. Read our first cut to know more.

And that is because the design language of the Honor 20 is very 2019. It comes with similar design elements to most smartphones these days. A tall display with thin black lines for bezels, a shiny reflective glass back, and a set of multiple cameras, most of which are lined up in a long vertical capsule unit. This is the basic essence of the smartphone which is not really different from the mainstream smartphone that we see today. 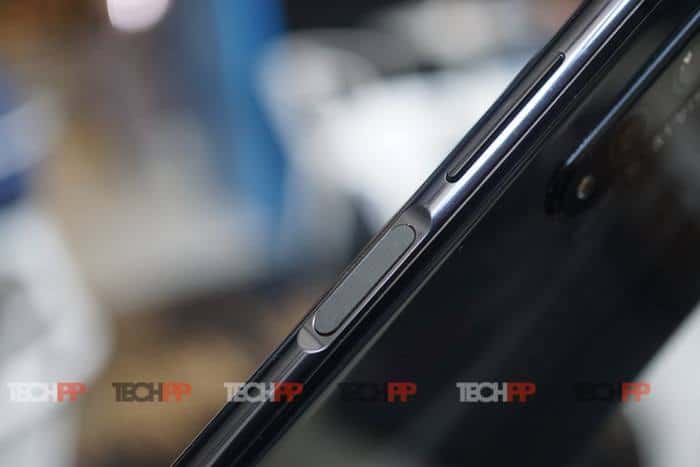 But there are a few neat touches that help the Honor 20 poke its head out of the “we look too similar” smartphone sack. The fashion is to pair a tall display like the one that the Honor 20 has, with a drop notch, but the smartphone follows the other Honor with a 20 in this regard (the View 20) and comes with a punch hole display with the front camera placed on the top left.

Also, smartphones are getting awfully tall but in the day and age where everyone seems to believe in the idea that ‘bigger is better,’ the Honor 20 feels refreshingly compact. And this is when the phone actually comes with a 6.26-inch display which in no sense can be considered small. Because of the trimmed down bezels and a very display hugging frame, the phone feels manageable and not so in-your-face.

The design of the Honor 20 may have been more mainstream than we would have liked but the specs are nothing like what you see on your smartphone next door. The device is powered by Huawei’s in-house HiSilicon Kirin 980 processor which is paired with 6 GB RAM and 128 GB storage. But that is all the storage you get because the phone does not come with support for microSD card. This is not the first time that we are seeing a Kirin 980 – we earlier saw the same chipset running the superb Huawei P30 Pro show and we are well aware of what it is capable of.

And it did not disappoint in the Honor 20 as well. The smartphone glided through our daily tasks. Basics like jumping from one app to another, web browsing, texting, social media scrolling, all went really smoothly. The Honor 20 also shone in the gaming department. It was no surprise how the smartphone flew in the casual gaming zone when it comes to time killers like Subway Surfers, Hang Line but it did really well in the high-end games department as well. We tried PUBG, Asphalt 9: Legends and Need For Speed No Limits on the phone and it sailed smoothly through all three. Apart from an occasional lag here and there, the gaming experience on the Honor 20 was really good. The phone did heat up a little when it was pushed, but never to an alarming level. 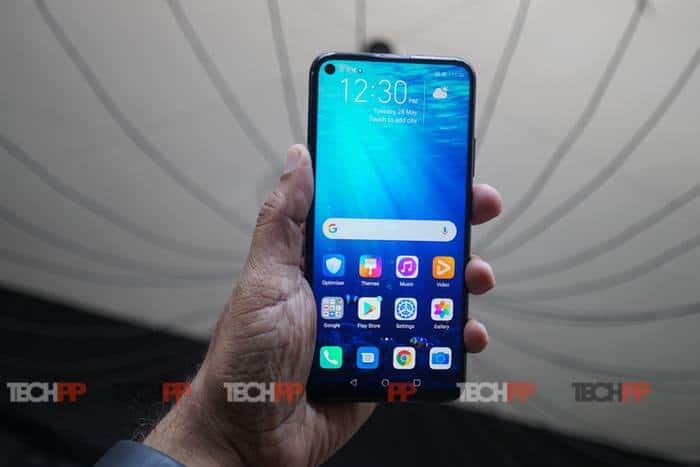 The device comes with a 6.26-inch full HD+ display with a screen resolution of 1080 x 2340 pixels. It looks very bright and produces deep contrasts. The colors are very rich and the response rate is pretty high. What is disappointing on the Honor 20 is the loudspeaker which really is not loud enough. The sound produced is clear but it is not loud enough to fill a room and can be easily overshadowed by even a slight bit of ambient noise.

Shot in the phone-y foot by them cameras!

Just like design, Honor has been very bold when it comes to cameras as well. The brand actually was one of the first smartphones that started the whole multiple camera frenzy and it has only moved up the levels since. The Honor 20 follows in the footsteps of its ancestors and comes with what looks like a very solid multiple camera setup.

At first, it might look like the device comes with a triple camera set up but there is actually a little lens outside of the main capsule as well. The Honor 20 comes with a 48-megapixel main camera with f/1.8 aperture with support for PDAF. This lens is bundled with a 16-megapixel ultra wide angle lens with f/2.2 aperture, a 2-megapixel macro lens with f/2.4 aperture (that little lens outside the main set up) and a 2-megapixel depth sensor with f/2.4. The camera app comes with a number of modes including Portrait, Photo, Video, Pro, AR Lens, Moving Picture, and Super Macro. 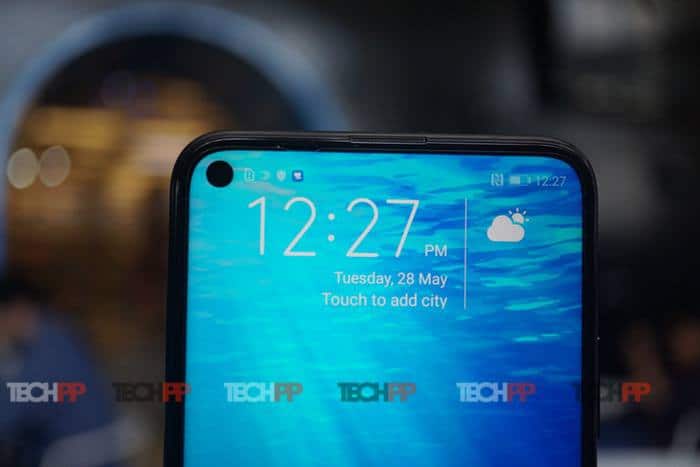 Sounds good, right? Unfortunately, it does not quite deliver.

To start with the basics, while it does well in the detail department, the color reproduction of the Honor 20 is pretty off. The camera creates saturated results and colors like orange, pink, red get even more so warm in results. Even though it comes with dedicated lenses for Macro mode and for depth sensing, the camera actually struggles in both the zones.

In the macro mode, the camera suggests that the optical shooting distance is around 4 cm. That seems impressive but it is really difficult for the device to get that close and focus on the subject. You have to keep going back and forth and have to keep adjusting your camera’s distance from the subject to get a decent picture and even then most of the shots will turn out blurry or grainy. We were really looking forward to experiencing a dedicated macro lens on the smartphone, but the Honor 20 did not really live up to our expectations. 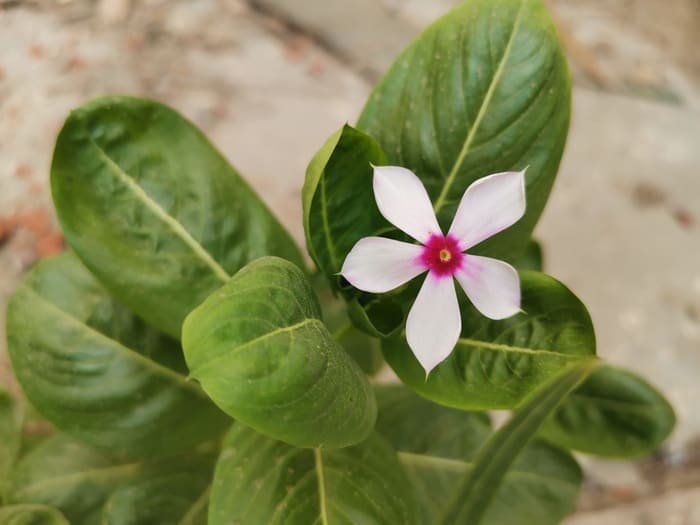 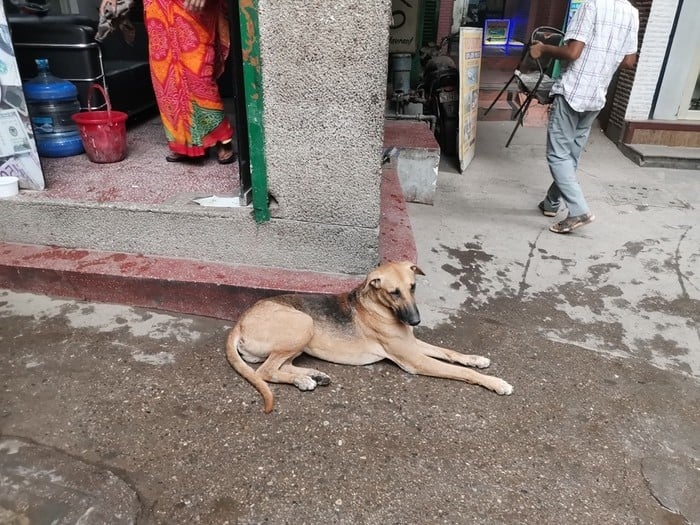 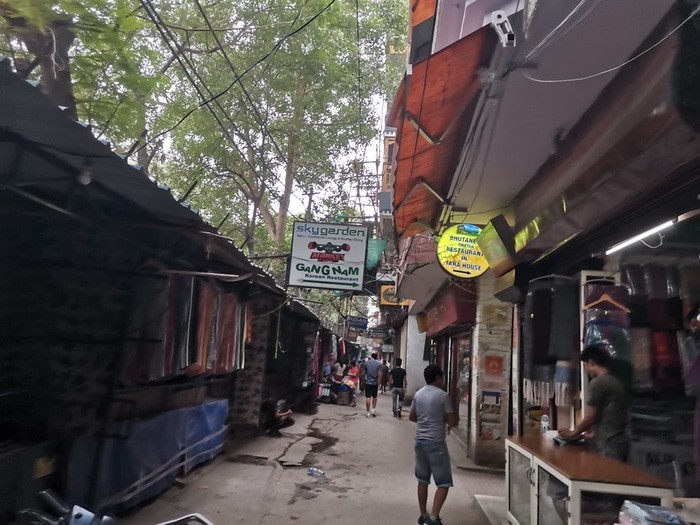 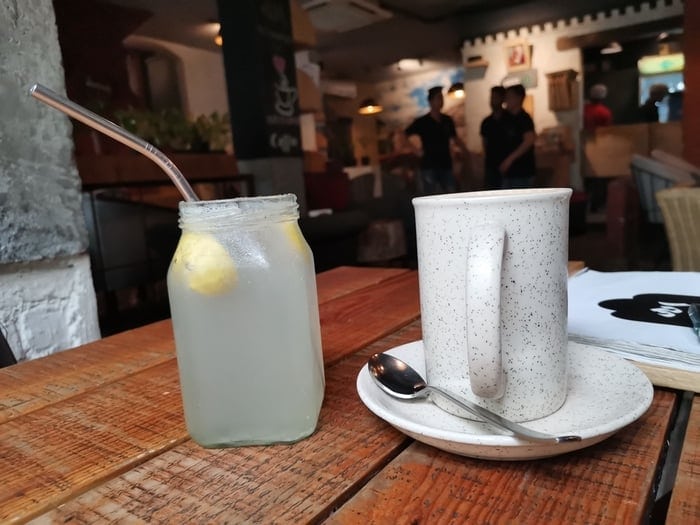 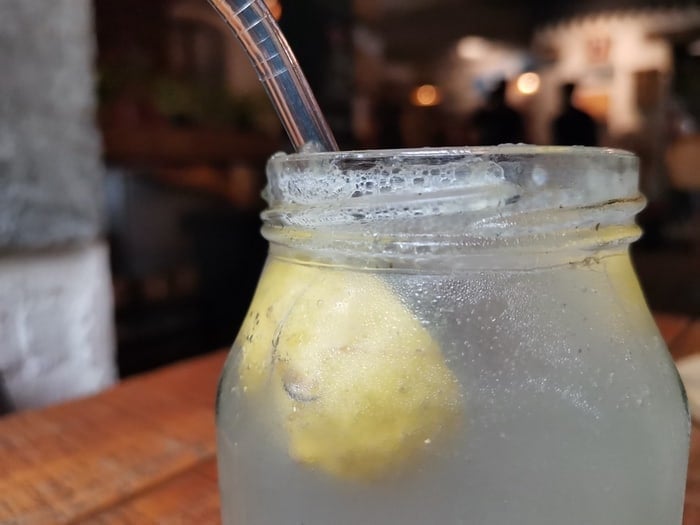 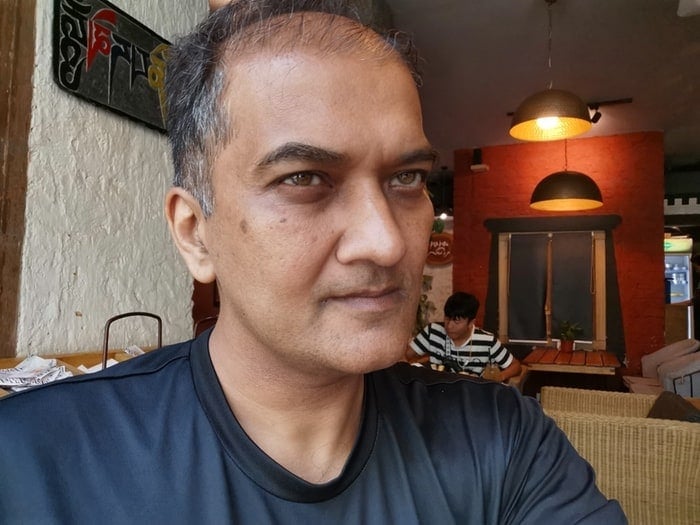 While it is easier to focus and take a picture in the Portrait mode, the device actually struggles to get the edges of the subject in focus. It often blurs a part of the subject with the background. The same happens with the Aperture mode.

You would think because the device comes with a dedicated ultrawide sensor, there would be a dedicated wide angle mode as well, but the brand has hidden it amongst the zoom options on the viewfinder. However, unlike other phones, which tend to have some indication of where to find the wide-angle mode, the Honor 20 just has three dots, with nothing to indicate what they stand for (normal, zoom and wide).

It might not have handled colors all that well, but the AI really excels when it comes to detecting scenes, suggesting modes that can help make the shot better. So when you take a landscape shot, it gives you the option to switch from normal view to wide view.

The phone comes with a 48-megapixel main sensor but the default resolution, much like other 48 megapixel shooters is set on 12-megapixel. You can change the resolution in the settings. The strangest thing is that the smartphone handled most of the heavy duty tasks we threw at it very easily but when it comes to loading pictures with its own camera app, there actually was a bit of waiting. Shots taken in Aperture Mode and Portrait Mode took a good two seconds to load while reviewing, which we did not expect from a device as powerful as the Honor 20.

On the front, there is a 32-megapixel sensor with f/2.0 Aperture. The selfie camera, just like its brother on the back, has a slight tendency to spike up colors and unlike the main camera, it does not capture a great amount of detail either. The only good thing about the front camera is that it does not aggressively smoothen selfies as some of the cameras that we have seen do, making you appear like something out of an anime strip. If you do like smooth, clear, unreal selfies that most phones take, you can simply turn on the beauty mode. Without it, your pictures will turn out quite close to reality.

The Honor 20 is powered by a 3,750 mAh battery and comes with support for fast charging, bundled with a 22.5W charger in the box for good measure. The phone can easily last you a day of normal usage. It will see off slightly less than a day when pushed but thanks to the fast charging support that it comes with it, you can get up to fifty percent of charge in just half an hour. The device does not come with support for wireless charging. 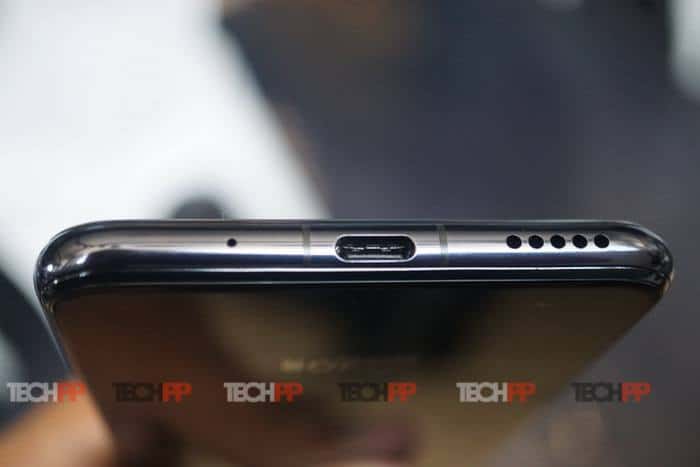 The Honor 20 runs on Android 9.0 (Pie), topped with a layer of Honor’s Magic UI 2.1.0. The UI of the Honor 20 is far from the stock Android experience that some like. It actually comes preloaded with a number of third-party apps as well as Honor’s own apps as well. The good thing is that they are organized well and are all fit in one screen, which is why the UI might seem uncomplicated and clean at first but scratch that surface, and you will see a pretty detailed layer which can take a bit of getting used to. The device comes with support for dual nano-SIM cards. The connectivity options on the phone include Wi-Fi, Bluetooth 5.0, GPS, infrared port, and USB OTG.

No Honorable way past OnePlus

Priced at Rs. 32,999, the Honor 20 comes with a trendy design and a very impressive spec sheet. While it delivers when it comes to general performance, the device disappoints in the camera department. The phone goes head to head with OnePlus 7 which is the phone to beat in the segment, packing great specs and performance, and comes with a formidable reputation. The Honor 20 is not a bad device by any standards but it is definitely facing an uphill battle against the mighty OnePlus warrior, which stands in its way to keep it from getting to the top. Unless it radically improves that camera (bring on them software updates), we do not see it unsettling the Never Settled One (Plus).

Samsung Galaxy S20 FE Review: Looking to Unsettle the Budget…
Honor 20 Series: Honor 20, Honor 20 Pro, and Honor 20i…
Six phones that could unsettle the OnePlus 8 in India
One Minus: Will Carl Pei's exit "unsettle" OnePlus?
Nothing Doing! Is Carl Pei's Shadow Going to Unsettle…
OnePlus Band Review: The Band looking to rock your fitness…