It started back in 2012 in the US, but it was not until 2020 that Zoom, the video calling app, found itself standing in the hall of fame. Yes, it did exist before that and had its share of B2B loyalists who used and believed in the app, but the past few months have seen Zoom bloom into the go-to video calling app for the mainstream user. The major credit for the exponential growth of the app goes to the new locked-down world. 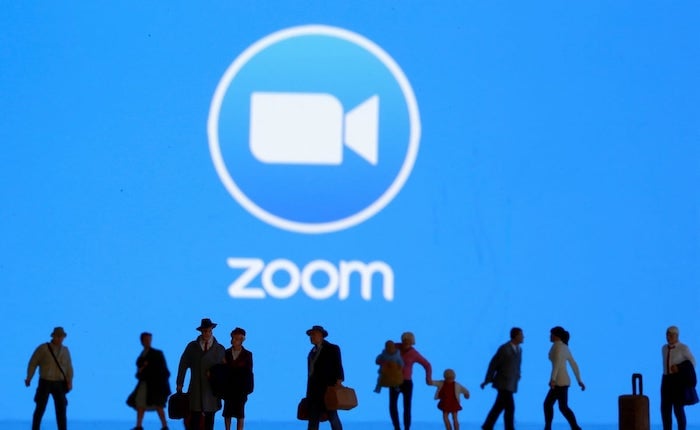 The rise of Zoom

COVID-19 snuck up on us and made all of us stay home in order to stay safe and with personal contact coming down precisely to zero, people had to discover new ways to stay connected with each other and slowly move the “at halt world.”.One of the biggest beneficiaries of this “no in-person contact” approach to flatten the COVID curve has been video calling apps and Zoom tops that list easily. At the end of the year, the app’s highest daily count of meeting participants was 10 million. By March, this had grown to a staggering 200 million!

The reason for this spectacular spike in popularity is Zoom’s versatility and ease of use. The video conferencing app allows you to connect up to a thousand people on a single call, of whom about 49 people can be on-screen while video chatting at a time. This is a feature we seldom find on other video calling apps. The ability to connect as many people on a single call with minimum fuss has made the app extremely popular.

From various businesses holding their meetings over video conferences, to product briefs and launches, to classes being held over the medium, Zoom has made it possible for people to large virtual gatherings in times when you cannot imagine or risk connecting with so many people in person. So much so that now Zoom has become a verb in its own right – “Let’s Zoom at —- hrs” has become a term that is often heard today. The success of the app has forced the likes of Google and Facebook to up their videoconferencing games!

But while we are sure you have been Zoom-ing in on the app for a while, how much do you actually know about the company and people behind it? Well, here are seven lesser know Zoom facts:

1. Born out of hatred for travel

Monday mornings have faced their share of resentment back when they used to be a thing but if there is anything we hated more than actual Mondays themselves, it had to be the office to commute on a Monday. Yes, we know it is equally bad on the rest of the weekdays, but the Monday morning commute gets us just a smidgen more. And because necessity (read hatred in this case) is the mother of all inventions, the founder and CEO of Zoom, Eric Yuan got the idea to create Zoom because he hated a particular trip. 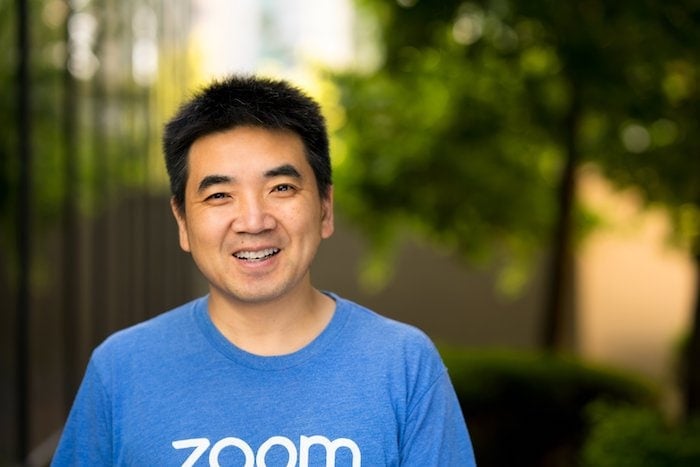 Teenaged Yuan used to take a ten-hour-long train in his university days to meet his girlfriend (now wife), and the time he lost in traveling sowed the seeds of the idea behind Zoom: to create a platform where one could visit someone minus the travel. We all know long commutes lead to some major daydreaming. And some of those dreams decades later turn into multi-billion dollar apps.

2. There was a (Saas)bee buzzing before you could Zoom-in

When Eric Yuan first left Cisco Webex (some say Cisco rejected his idea of a video conferencing app that could run easily on a phone) along with 40 other engineers in 2011 to start a new company, he called it Saasbee Inc. It was not until 2012 that they changed the name of the company to its current name, Zoom. But for that change, we would have been saying “Let’s Sasbee in the evening…” Does not quite sound as snappy, does it?

3. You have to learn to crawl before you learn to walk…so Aerosmith!

Zoom might sound like an ingenious idea from the get-go on paper but it struggled to get initial funding in order to take off. The brand had a lot of trouble finding investors as quite a few folks at the time thought that the video calling business was already saturated. Many might not know this but at first another consumer video calling app called Tango gave Yuan money to pay 30 engineers to work on a better video conferencing technology. They then managed to raise their seed money with the help of Webex’s founder Subrah Iyar and former Cisco SVP and General Counsel Dan Scheinman. Note to those who missed out investing in the company back then: who is having the last laugh, eh? 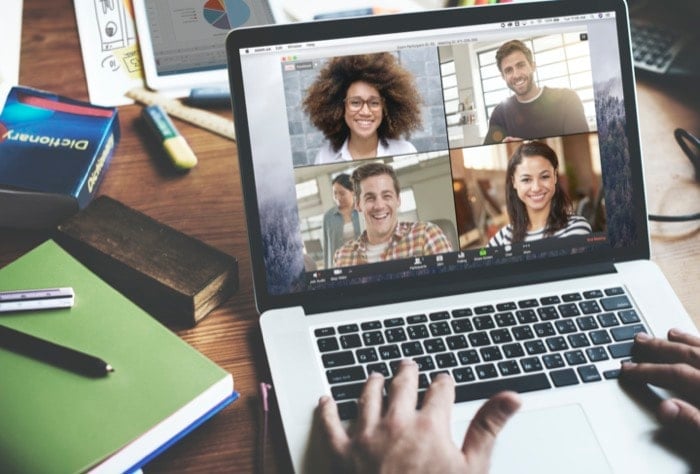 Like any other startup, the initial days were difficult for Zoom as well. The company had rundown offices in Santa Clara, the elevator in the building which was often broken, and a precious video camera set up on top of a shabby fridge. Who would have thought at the time that the same company that many thought was venturing into a saturated field would one day become a mammoth of this size?

5. They care! Check the walls!

It might sound very cheesy but Zoom’s culture as per their CEO revolves around happiness and caring. This is not just a philosophy that they explain to their employees in the training program, but they even have posters on the wall of Zoom’s lobby in every location to remind those who may forget. 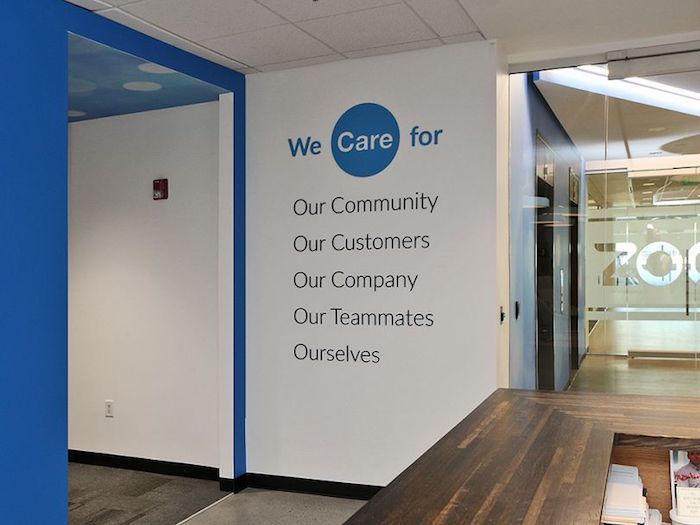 6. Canceled Zoom subscription = a personal email from the CEO

This used to happen back in the early days of Zoom when every single canceled subscription would lead to the subscriber getting a personal email from Eric Yuan himself. A person once accused the company of being dishonest as he thought the emails were auto-generated and not from Yuan. The CEO had to offer an immediate Zoom call to the person while writing emails. The video call did not take place but Yuan was not accused of being dishonest again. By the way, do not go about canceling your Zoom service in order to get a personal mail because it does not happen now. The perils of popularity! 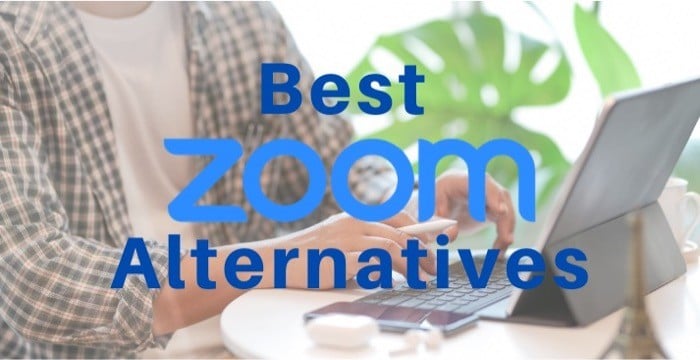 7. With many users, come so many privacy concerns – and a feature freeze!

With Zoom growing exponentially over the last couple of months and becoming popular amongst mainstream users, the Zoom Titanic has ended up hitting a number of privacy icebergs (although it has not sunk, to its credit). One of the most popular (unfortunately) being Zoom-bombing, which is basically when an unknown person bombs your video call meeting disputing it.

Zoom bombing can be just a prank at times but some times it takes on very serious proportions – many users have had to put up with abuse, slurs, and very inappropriate content from the “attacker.” There were also fears that Zoom was passing user data to Facebook. Faced with increasing criticism and statements from companies and governments warning users against the service (not to mention rumors in WhatsApp University that the company was Chinese – it is a US company, in fact), Eric Yuan, unlike some CEOs, did not beat about the bush.

“We did not design the product with the foresight that, in a matter of weeks, every person in the world would suddenly be working, studying, and socializing from home,” he wrote in a blog post. He apologised for the missteps by the company, stating “we recognize that we have fallen short of the community’s – and our own – privacy and security expectations. For that, I am deeply sorry,” and went on to promise to tackle the issues that had been raised. One of the most radical steps he took was a 90-day feature freeze, “shifting all our engineering resources to focus on our biggest trust, safety, and privacy issues,” rather than adding more features to the app. Imagine a brand doing that! Zoom did.

Was this article helpful?
YesNo
TechPP is supported by our audience. We may earn affiliate commissions from buying links on this site.
Read Next
10 Best Screen Sharing Tools for Windows in 2023 [FREE]
#Case in Point #Facts #zoom