Amazfit has made a name for itself in the Indian market by launching various wearables, mainly smartwatches, and recently even a pair of truly wireless earphones. Smartwatches from Amazfit are popular amongst the masses since they offer decent functionality and are quite affordable too. Not to forget, they have multiple offerings at different price points with various designs to choose from if you decide to wear them as fashion accessories. 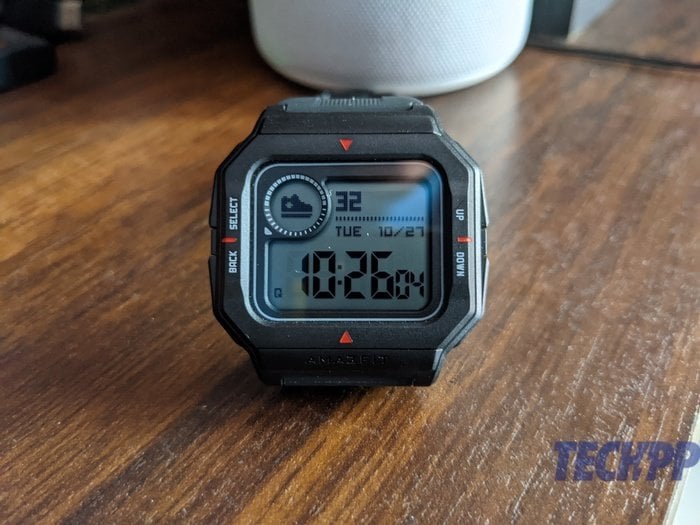 While we are on the topic of design, most watches from Amazfit look like a conventional smartwatch in the sense that the dial is either rectangular or circular, and there is a color display used to show the watch face, fitness information, and basically any sort of data that you would view on your smartwatch. With the recently launched Amazfit Neo though, the brand has taken a slightly different approach. Amazfit has opted for a retro look with the Neo reminiscent of some older Casio watches.

If you are a fan of classic timepieces, you are surely going to love the Amazfit Neo. Well, at least the way it looks. The functionality? That is up to you to decide based on everything we discuss hereon. We used the Amazfit Neo for over three weeks to get a better idea of whether or not you should pick it up over something like the Mi Smart Band 5 which is a conventional fitness tracker that costs as much as the Amazfit Neo but arguably offers better functionality. Here are our findings.

Let’s just put it this way – If you are keen on posting pictures on Instagram with the hashtag #ThrobackThursday, the Amazfit Neo might fetch you some extra likes. The design is undoubtedly inspired by the classic digital watches from a few decades ago and we are not complaining at all. The Amazfit Neo looks stylish on the hand and is a nice departure from the typical circular or rectangular all-glass smartwatches we have been seeing. The dial takes the shape of a squircle, which for those of you unaware, is essentially a square with rounded edges, and the dial itself has a protruding polycarbonate circumference with button labels and some red accents that look cool. 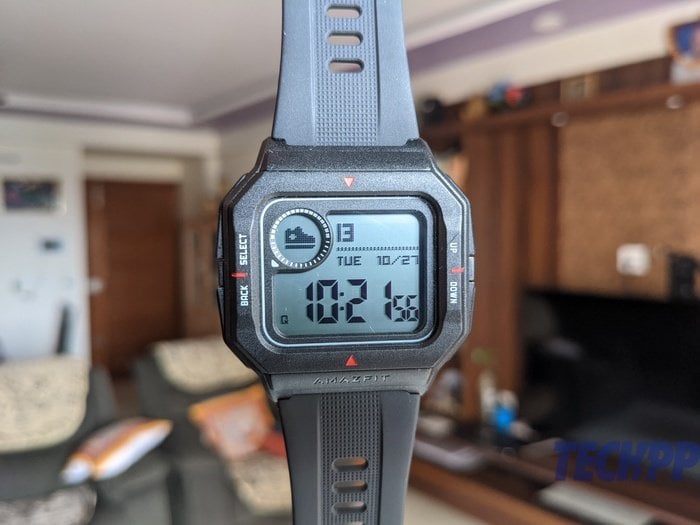 The straps are also the typical sports bands that we see on conventional watches but unfortunately do not come with any sort of quick-release mechanism so will you most likely need professional tools to swap the straps. The included strap though is comfortable even for extended use and given that the entire watch is extremely lightweight, you can wear it at night too while sleeping without any issue. The Amazfit Neo is water-resistant up to 50m so you can take it for a swim.

If you are looking for something modern and smartwatch-like, the Amazfit Neo is not for you. Amazfit has a range of smartwatches with that exact look, so you might want to consider those. The Neo is for someone specifically looking to revive the design language which was once a cult classic on watches. 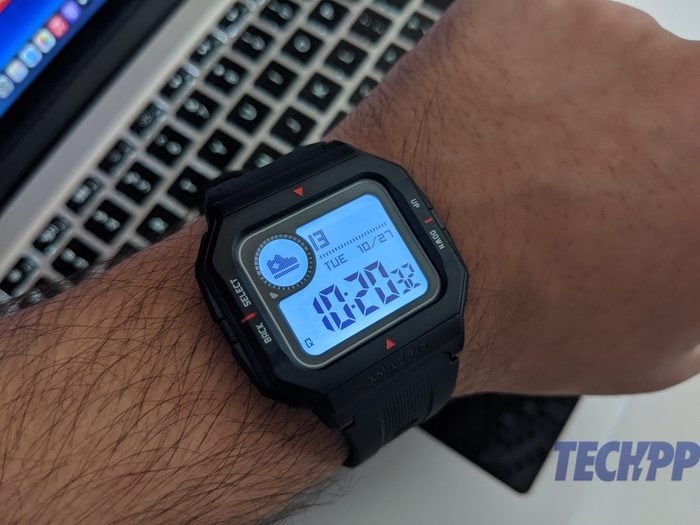 Unlike a smartwatch (it’s important to keep mentioning this since Amazfit usually makes smartwatches and the Neo is kind of a hybrid between a smartwatch and a dumb watch), the Amazfit Neo gets a seven-segment display like the one you would have seen on any digital watch or even a calculator. No IPS, no OLED, none of those fancy technologies. While this means that you lose out on a color display and the pretty icons that come along with it, the gains are in terms of outdoor visibility which is great on the Amazfit Neo, and when you are in dim lighting, a flick of the wrist turns on the blue backlight which aids in viewing the display.

Given the limitations of a seven-segment display, which as the name suggests can only technically display characters using 7 different LED combinations, you do not get features like different watch faces or fancy icons for notifications or weather. There is a small circular portion on the top right of the panel that seems like a dot-matrix display and can show some basic icons to denote the mode it is in. Of course, you do not get any touch-screen capabilities with the Amazfit Neo and all the operations are performed using the buttons on the sides. 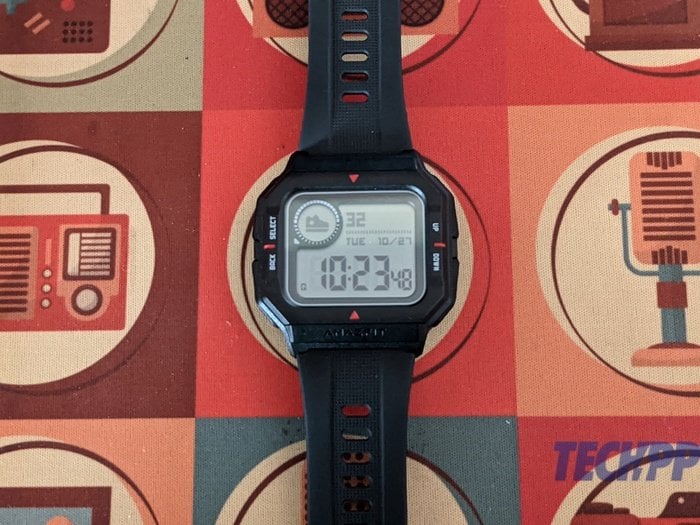 The Amazfit Neo at its core does offer some smart features despite looking like a conventional watch. You can do your usual data tracking with respect to the steps taken, distance walked, calories burnt, and even track your sleep. The Amazfit Neo also gets support for PAI so you can track your activity scores over a week. However, what you cannot do with the Amazfit Neo is track workouts. Unlike fitness trackers like the Mi Band 5 that retail for a similar price, the Amazfit Neo does not have workout tracking features, and hence if you go on runs or want to track your cycling or swimming workouts, you will not be able to do that with the Neo.

Heart-rate monitoring is present though, and you can also get a glimpse of your local weather, and there’s also the ability to use a stopwatch and set alarms. If you are wondering about the ability to receive notifications from your phone, the Amazfit Neo can do that, but in a limited way. Unlike the Mi Smart Band 5 or other smartwatches with a full-fledged display, the Amazfit Neo can only display one single icon for any sort of notification you receive which is both annoying and confusing. If you get a WhatsApp notification or an e-mail, the way you see it on the Neo will be the same which means you will have to look at your phone regardless of the watch beeping which beats the purpose. 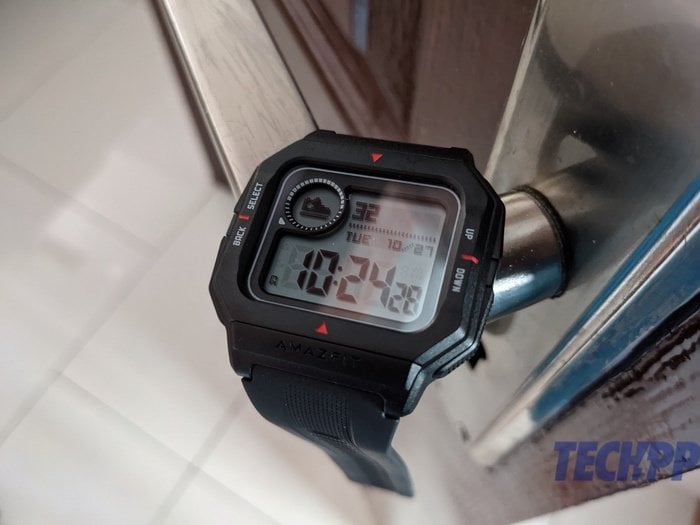 Speaking of beeping, the biggest pet-peeve that we had with the Amazfit Neo is that while there is a chime to notify you when you get new notifications, it is loud and annoying especially if you get a barrage of notifications. Especially if you get an incoming call, the Neo beeps like how a hungry baby weeps and the irritation seeps under your skin and keeps you annoyed till you receive or end the call. Instead, Amazfit could have fit in a vibration motor that you get with other smartwatches. If you are getting yourself the Neo, do yourself and the people around you a favor by turning on the do not disturb mode.

The accuracy of the fitness metrics seems as good as any other smartwatch from Amazfit itself and the watch also pairs easily with your smartphone using the Zepp app from where it can be controlled. If you are mainly getting the Amazfit Neo for its looks and are considering its fitness features as just an added bonus, you will be more than pleased with the Neo. However, if you are specifically looking to up your fitness regime, a dedicated fitness tracker like the Mi Smart Band 5 makes more sense since it has some added features. 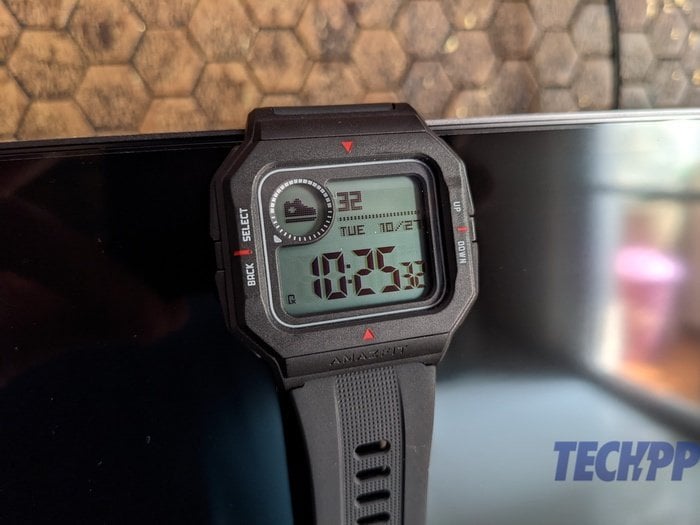 This has to be one of the biggest highlights of the Amazfit Neo. The brand claims up to 28 days of battery on a single charge and while that is achievable with minimum backlight usage and automatic heart-rate monitoring turned off, we got through 20 days of usage on a single charge and that is quite impressive. You get a proprietary charging cradle within the box which takes about two hours to charge the Neo completely.

Amazfit Neo Review: Should you buy? 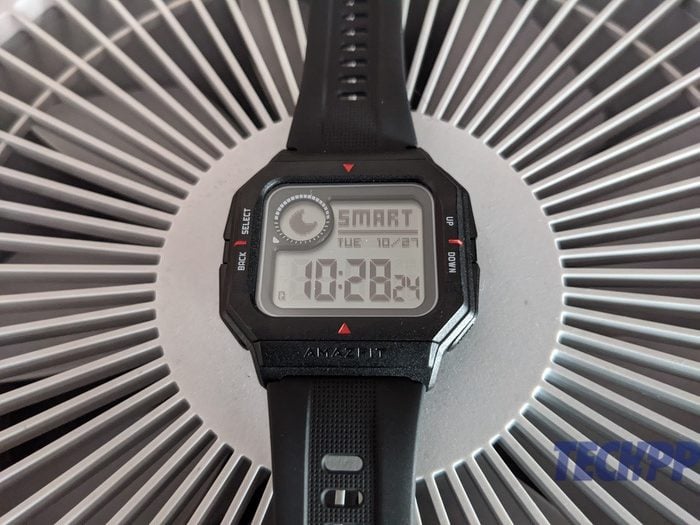 Should you buy the Amazfit Neo for Rs. 2,299? If you are going for the retro look and are looking at the Neo as an accessory addition to your wardrobe, it is a good choice, provided you enable do not disturb. If you’re looking at it solely from a fitness and functionality standpoint, the Mi Smart Band 5 just offers a lot more in term of fitness and even miscellaneous functions like music control, camera shutter, the ability to view notifications (that too with vibration instead of a chime), and not to forget, it has an OLED display with colors so you can have multiple different watch faces. All while costing the same and with the same great battery life.