In late 2019, Realme kind of rejigged the TWS market in India by introducing the Realme Buds Air. They looked very similar to the TWS that made TWS a craze, and in spite of a few teething problems, brought a truckload of features (including wireless charging) at a surprisingly affordable price. These were followed by a number of TWS from the brand, which emerged as one of the leading players in this growing segment. And now the TWS that started it all have an official successor – the Realme Buds Air 2. They have got some huge boots to fill and a fair number of rough spots to iron out as well. Do they succeed? Here is our Realme Buds Air 2 review. 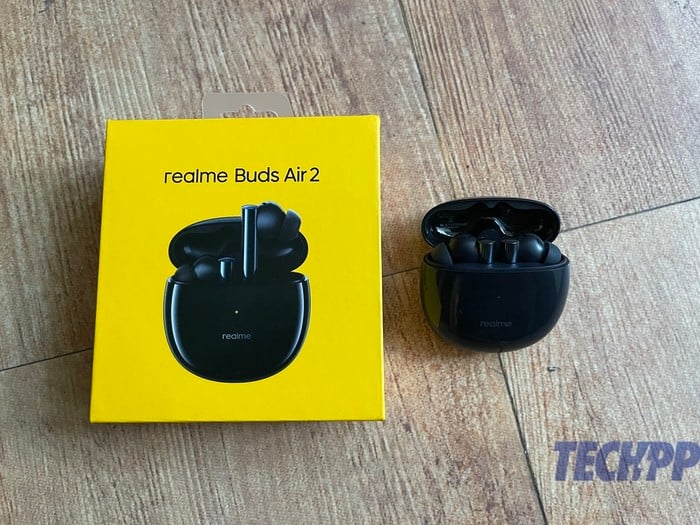 In terms of design, the Realme Buds Air 2 come with a reasonably mainstream look and this time cannot be accused of being inspired by that fruity company in Cupertino. The buds come in a glossy case that is squoval (squarish oval) and compact and light enough, and has a single LED in front to show battery status. The buds themselves are about four grams each, and come with a stem and a top that are slightly shiny – our Closer Black one had dark blue accents on it. We were given a fair bit of talk on the intricacy of design and so on, but at the end of the day, these look smart. They will not turn many heads but they will blend in nicely as well, which is what we think TWS are designed for.

They are also very comfortable to use. There are three sets of tips to let you pick and choose which fits you best, and we never had any issues with them falling out of our ears too often (they did once or twice, but then all TWS do that). The case is all plastic and so are the buds, but the buds come with IPX5 water resistance (the case does not) so should survive splashes and gym sessions and maybe even the odd drizzle. In terms of ports and controls, the case has a USB Type C port at the base and on the side has a button that is used for connecting it to a device – spotting it can be a little difficult in the Closer Black variant. The stems of the buds also have a touch area that is marked by a tiny hole near the top of the back – again finding it can be a task and we do wish it had been clearly demarcated because as we will see later, it lead to a few usability issues.

The best-sounding Realme TWS by a mile 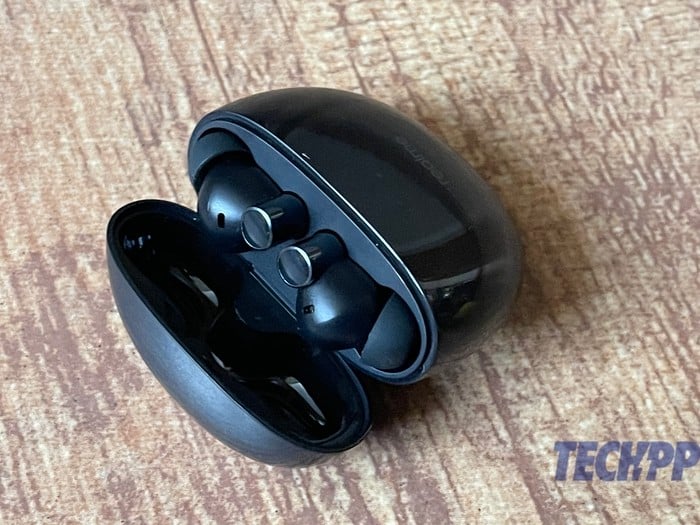 Let us get something clear right away – the Realme Buds Air 2 are easily the best-sounding TWS from the brand. We had found the original Buds Air sound a little toneless almost (like a good quality FM transmission) and subsequent TWS from the brand laid a little too much emphasis on bass. The Buds Air 2, however, are a very different breed, thanks perhaps to the “10 mm diamond class hi-fi driver.” They sound quite clear and even though they do not come with aptX support (they support AAC), the audio quality they deliver is very good indeed. Yes, the sound does have a clear tendency towards accenting the bass, but it is not as overwhelming as we have seen in the past. Interestingly, even the higher frequencies seemed to have been reasonably well handled, which is a slight surprise at this price point. You will not get sparkling clarity, but neither will you get the slightly muddy bass that overwhelms everything else. At times the vocals seemed compromised, getting a little lost in some of the slightly more complex numbers. 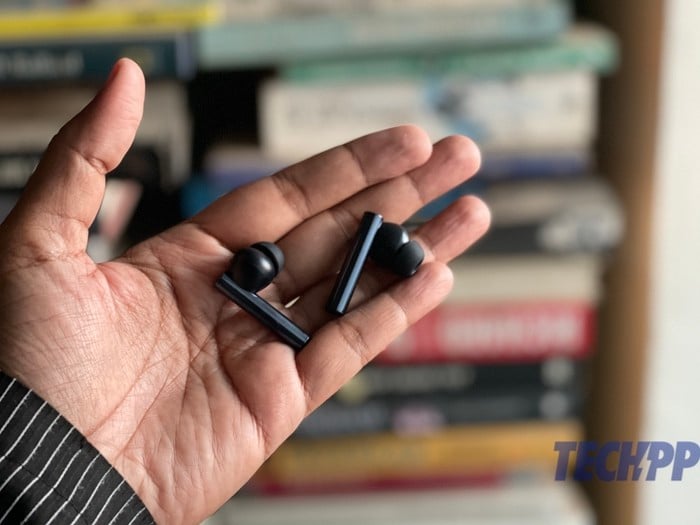 The instrument separation and sound stage are not really quite there – things seem a little “crowded” at times with sounds intermingling in a number of more complex tracks. So you can’t really enjoy jazz and classical music on these but if you are looking for some very enjoyable and impressively loud pop, trance, and rock, these tick the boxes very thoroughly. A note about the volume – the Realme Buds Air 2 deliver a surprisingly loud output and do not “break” even at high volumes. Are they as good as the Lypertek Levi, which in our book, are the best TWS in terms of sound quality in the sub-Rs 5,000 zone? We think they are not quite as good, but come close and that is saying something. They are great for watching shows and also for casual gaming. Push them into high-end gaming, however, and a few latency issues do crop up.

ANC is there, although a little tricky to use… 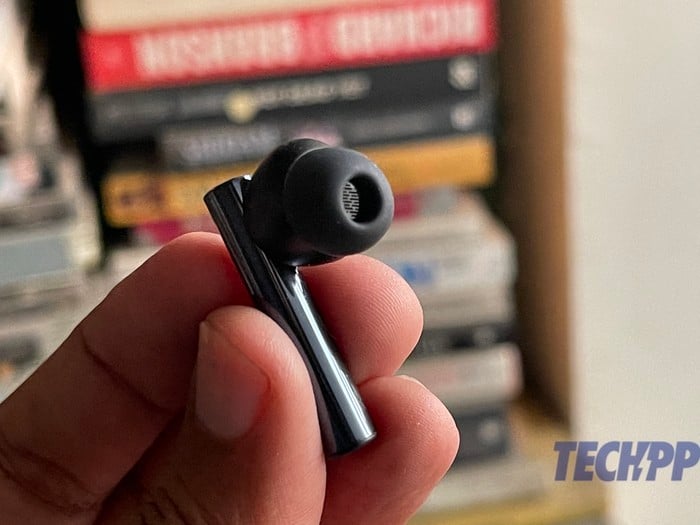 Of course, one of the main features of the Buds Air 2 is active noise cancellation (ANC). At this price, ANC is a rarity. And well, it is indeed present on the Buds Air 2, courtesy Relame’s own R2 chip. How good is it? Well, frankly, do not expect the world around you to go dead silent when you switch it on. But a few of the sounds will subside, like air conditioning buzz, the ceiling fans, and even some of the normal humming chatter in a cafe. However, loud and sharp sounds will find their way in, and I do not think the ANC on these TWS is good enough to drown out the sound of aircraft engines or the metro. That said, it is certainly not unusable and is pretty much similar to what we get on most devices in the sub-Rs 5,000 segment. Its presence is a plus. 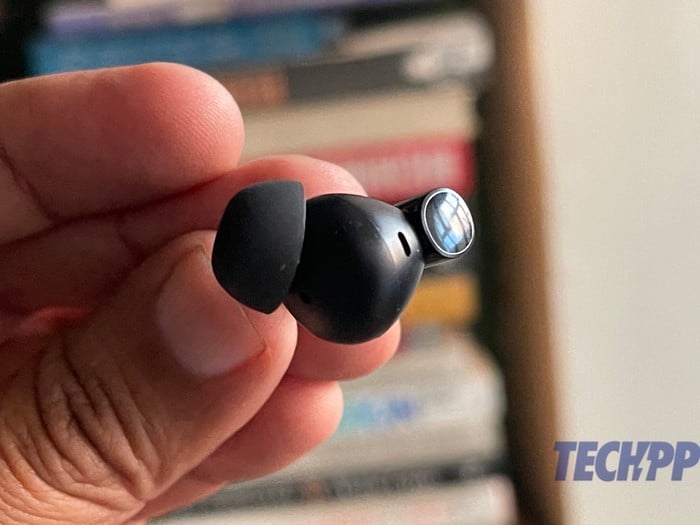 Activating it, however, is a little tricky. Buds Air 2 require you to press both buds at the pressing point (a tiny hole near the top of the back of each bud) for about two seconds to switch between transparency mode and ANC. Well, this generally works but the problem is that the voice announcement telling you about which mode has been activated is made even as the content is being played – so you might hear “noise cancellation” along with the song that was playing when you activated it. It is not said loudly enough, so there is a decent chance you will miss it. Pressing the buds together also often tends to drive the buds deeper into your ears, which is not always comfortable. 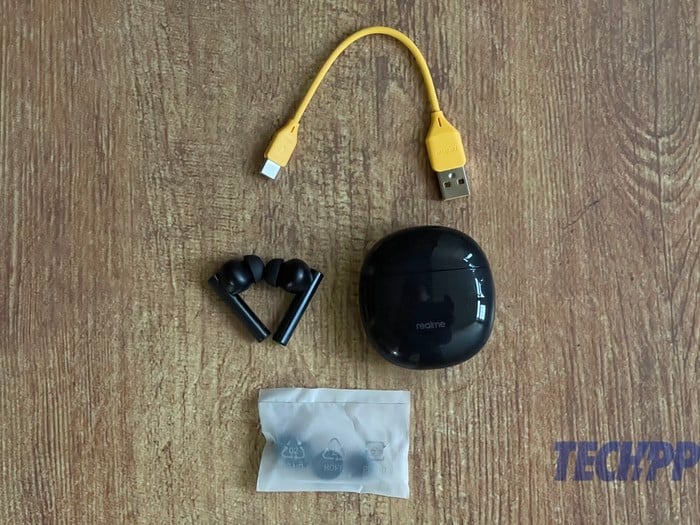 If sound is the forte of the Realme Buds Air 2, its UI is a bit of a letdown. A Realme Link app is supposed to give you greater control over the TWS and also access to special features (including a bass boost) and updates, but at the time of writing, the app (both on Android and iOS) simply refused to recognize the TWS. Of course, Realme has a good track record of updating software, and we are reasonably sure things will be fixed before the buds become commercially available.

The buds connect smoothly to both Android and iOS devices over simple Bluetooth, and the process is simple enough – keep the button on the side of the case (which is a bit difficult to spot, we repeat) pressed for a while to get into pairing mode. And then spot the device on the Bluetooth settings of your phone and connect. The process is smooth and the connection is stable over a decent distance as well (easily over 10-12 feet) – Bluetooth 5.2! Mind you, you cannot connect to two devices at the same time and switch between them, but that is not really a deal-breaker. 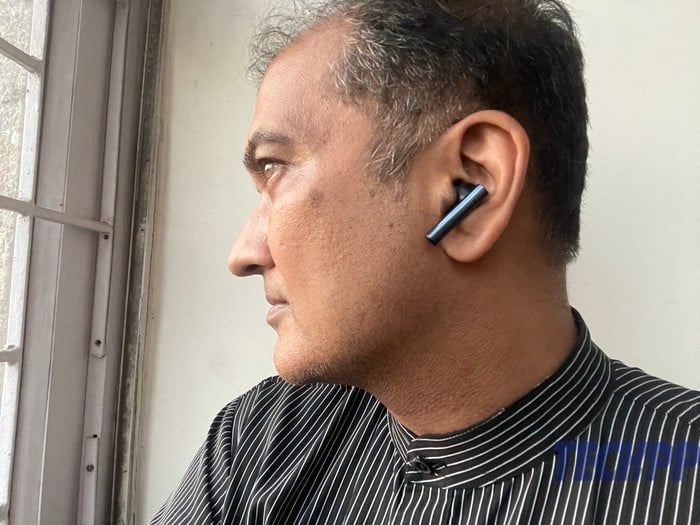 What is however a bit of a spanner in the works is the fact that ear detection is rather inconsistent. The music is supposed to pause when we take one of the buds out of our ears but often that did not happen. What’s more, sometimes music continued to play even when we have placed the buds back in the case. The controls revolve around tapping and pressing the buds but the area where the taps are effective is a small one, and that can make things a little tough and there was a fair bit of tap and miss happening. There are also no volume controls on the buds and no way that we could figure out to summon a virtual assistant on them – not deal breakers but kind of disappointing. 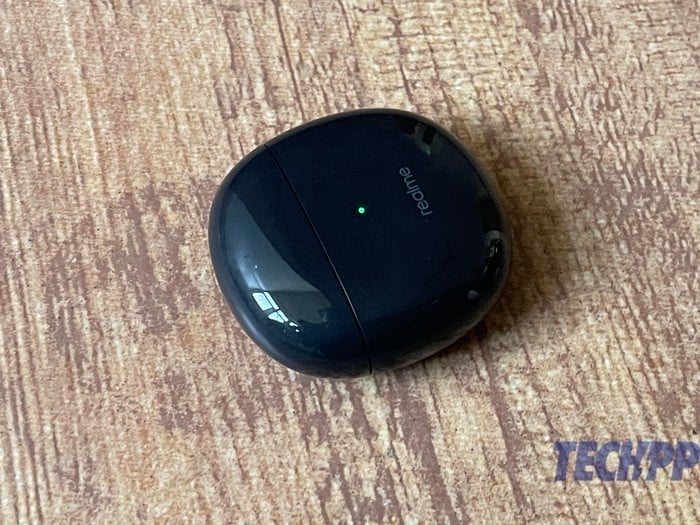 Battery life was not the strongest suit of the original Realme Buds Air, and in some cases actually got worse with time. Well, that has been given a boost this time. Realme claims that the buds will give you 5 hours of battery on a full charge and well, we consistently racked up between four and five hours. Yes, it can go below those numbers if you turn up the volume but then as we pointed out, the volume is not an issue here – even 60-70 percent gets very loud at times. The case itself claims to add another twenty hours to this, taking the total number to 25 hours, and well, we found ourselves generally getting close to twenty hours in all. That is not exceptionally good, but definitely decent. There is no wireless charging for the case this time, but ten minutes of charging gets you about an hour and a half of playback, which is very handy.

Call quality on the buds, however, was a slight letdown. People with whom we conversed frequently told us that our voice sounded a little distorted. The buds also come with noise cancellation for calling and they did cut down some of the sounds around us but not all of it. We could hear the people we were talking to very clearly though. 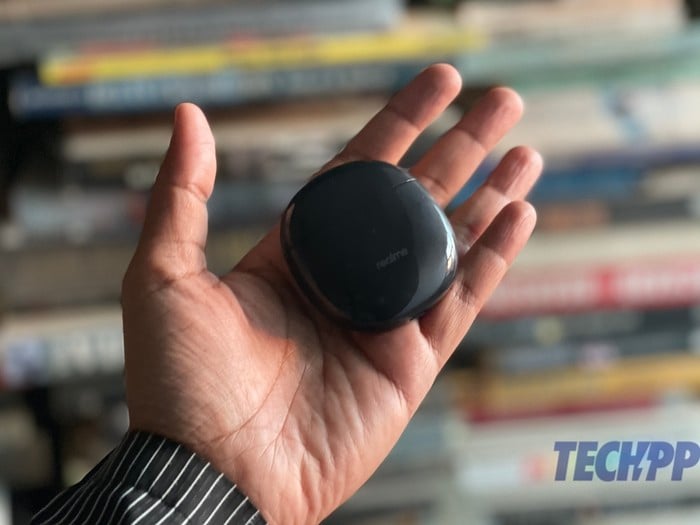 Their price, however, can make us forgive the eccentricities of the Realme Buds Air 2. At Rs 3,299, these are very good value for money if you are looking for good audio with a slight bass accent. We definitely found the sound quality to be better than what we had seen on the OnePlus Buds Z and while the Mi True Wireless Earphones 2 might have a slight edge in clarity terms, the Realme Buds Air 2 just sounded way more pleasant. Oppo has a few offerings in the sub-Rs 5,000 zone as well, but we think the Buds Air 2 have a clear edge above them, given their price point. If Realme can fix the Link app, these could well be one of the best overall options for anyone looking for a pair of TWS (with or without ANC) below Rs 5,000. The Buds Air have a very able successor.