With the absence of wires in earphones comes the relative absence of great audio quality. Or so they say about truly wireless earphones. And to a large extent that is the case, more so when you descend the price ladder and get into the Rs 5,000 or lesser segment. There is no shortage of options, but the sound quality often leaves a bit to be desired. Xiaomi is looking to change that with its first set of truly wireless earphones (TWS), the rather elaborately named Mi True Wireless Earphones 2. 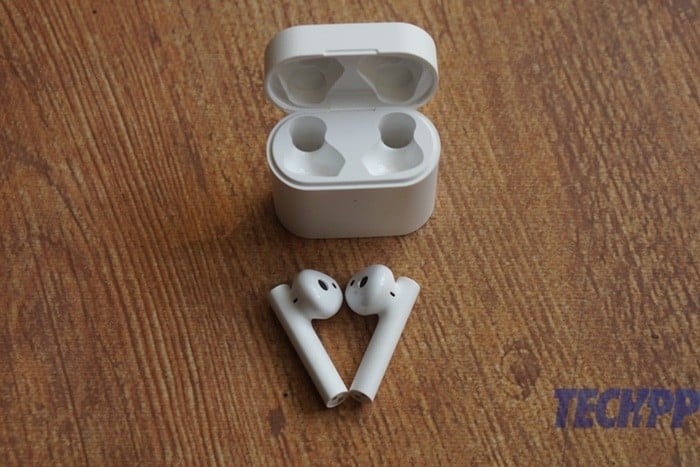 Let us get straight to what really matters – for their price, these truly wireless earphones sound very good indeed. Part of the reason might be the 14.2 mm drivers (which are actually among the largest in the TWS segment), but knowing how loosely driver size is linked to actual performance, we feel Xiaomi has just worked a little extra on the tuning of these earphones. The result is largely balanced and very clear sound. There is a slight emphasis on bass, but it never threatens to overwhelm other frequencies. In fact, we felt that there was a little extra “ting” even to vocals and stringed instruments. All said and done, these earphones are great for casual listening. You are not going to a terrific thump or outstanding vocals, but nothing seems suppressed and the clarity stands out.

We heard rock, country, pop, and heavy metal on it and even threw in some jazz, and we never really felt as if we were missing anything. Unlike most TWS in this segment, the Mi True Wireless Earphones 2 add some “body” to the sound and are neither flat (those FM radio feels) not too bass-heavy (those that make vocals sound like a crime!). They even have a bit of a soundstage – you can feel the sound coming from different directions, again something that you do not see very often at this price point. They are loud enough without being shrill or muddy (that slightly blurred, thick sound), and the sound does not break at higher volumes. 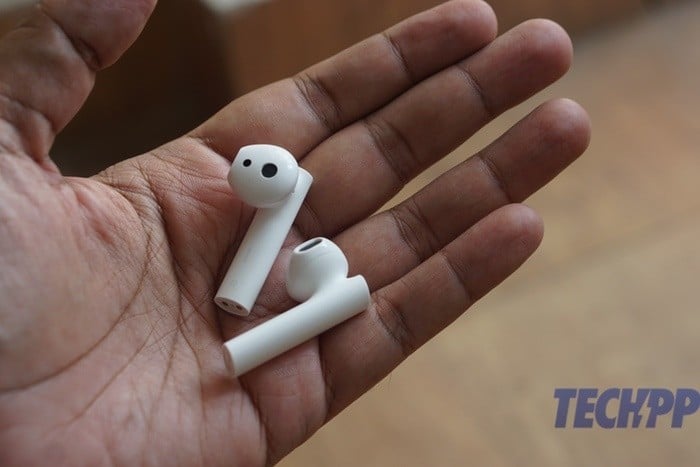 There is a slight catch, though – if you really want to get the most of out the earphones, you will need a phone or a source that supports the LHDC audio codec, which delivers hi-resolution audio, because of its ability to send more sound data. In simple English, it means that unless your phone or media player does not support the LHDC audio codec, these earphones will sound AS good. Xiaomi’s own Mi 10 has support for the codec, but many phones do not. How much of a difference does it make? Well, significant. Music from the Mi 10 simply sounded so much richer and deeper. That said, even with “normal” phones, like the Redmi Note 9 Pro, the Mi True Wireless Earphones 2 sound significantly better than the competition.

We will keep the tech jargon out of this and say it simply – if you are looking for the sound quality on TWS and your budget is below Rs 5,000 (well, even below Rs 7,500), these are your best options in the market right now. No, they are not audiophile quality, but then, to be painfully blunt – no TWS are. There is slight latency (a gap between the sound and the images accompanying them) when watching videos or playing games, but again, that is TWS territory, and often the price you pay for losing them wires.

Not quite AirPod clones and with some clever stem design too

When it comes to TWS design, there are two camps – the ones that want to look like “long lost twins” of the AirPods, and those that want to look radically different. The Mi True Wireless Earphones 2, though, come in between these two camps. They do look like the AirPods (1st and 2nd generation) with a prominent stem and the earbuds on top of it, but they are different as well. The stems are more cylindrical here and even protrude behind the earbuds. In fact, you can actually make each earbud stand on its “head,” which is actually interesting, as we have not seen this on other TWS. The stems have a matte finish, which saves them from getting scratches, although the snow-white color does mean that you will have to clean them frequently. The buds themselves however have a more glossy finish. 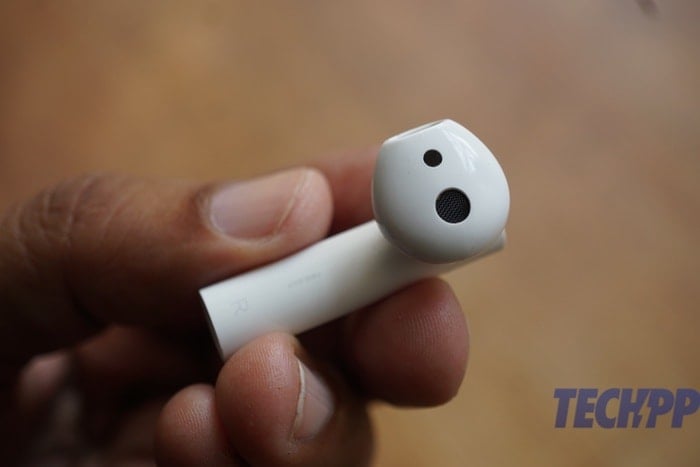 The case holding the Mi True Wireless Earphones 2, which also doubles as a charger, is also very different from the AirPods – it is a cuboid, with rectangular front and back and curved, semi-oval sides. It is taller and wider, although it will fit into most pockets without any trouble at all. It has an indicator light outside, a button that has to be pressed to initiate pairing on the sides, and a USB Type-C port on the base. The case can be flicked open easily with one hand and can stand very easily on its base, which is a whole lot better than lying on its front and back, which ends up smudging more of its surface.

The earbuds attach magnetically to the case, and thanks to that protrusion behind the stem, are very easy to pull out. They are on-ear earbuds so there are no tips for different ear sizes. They do stay on more often than not, although, like all TWS earbuds, the Mi True Wireless Earphones 2 do fall out occasionally. The absence of a super snug fit does also mean that external sounds can creep in from time to time, but it is never to deal-breaking levels.

The Mi True Wireless Earphones 2 are smart enough and thanks to those stems are rather distinct at the time of writing. They are made of sturdy plastic and are light enough to wear.

And working fine most of the time 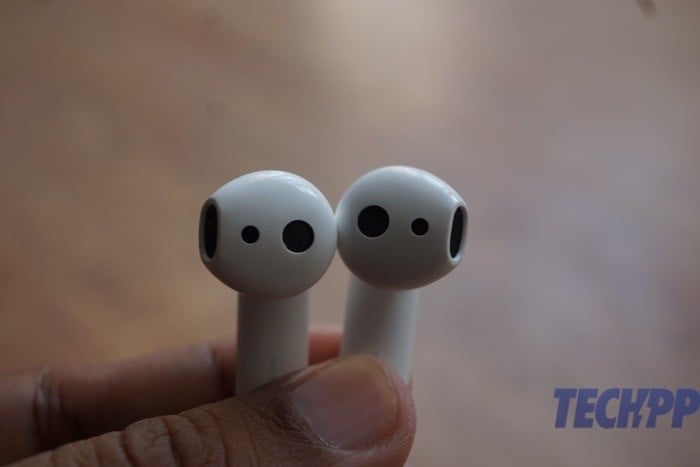 In terms of functionality, the Mi True Wireless Earphones 2 check most boxes, although they do leave a few blanks. Pairing is simple – flip open the case and press the button to pair. Once paired, just flipping the case open will be enough. There seems to be a slight problem with connectivity at times – we lost the connection sometimes when we went into an adjoining room or even went about seven to eight feet away from our handsets. Interestingly, the connection was not lost totally but disappeared for a few seconds and then came back again. A bit of an irritating oddity, as it can make you miss out bits of music and dialogue.

The controls revolve around double taps – double tap to take or end a call, double-tap on the left for the virtual assistant, and double tap on the right for play or pause. Taking out a single earphone pauses the music. The taps do not always quite work the way they are supposed to but then, one gets the hang of them by and by. That said, as with so many truly wireless earphones, we found ourselves using the phone to control content more often than not. 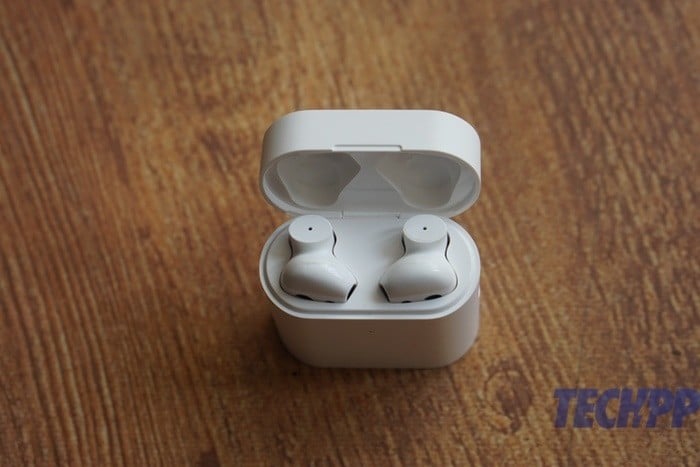 Call quality was generally quite good, although environment noise cancellation did not quite seem to make a big difference as the folks we spoke to often said they could hear sounds in the background. There is no dust or water resistance so we would advise using them with due caution in areas where those two are found.

Finally, there is battery life, and that is a little middling. The buds in themselves give about three to four hours and the case adds another ten hours to the mix. Basically you are carrying fourteen hours of battery life when the fully charged buds are in the case. Not exceptional, not bad either. There is no wireless charging but we are not really complaining at this price point. Yes, Realme did provide wireless charging to its Buds Air, but we do not think that folks at this price point would be looking to invest in a wireless charger as well. 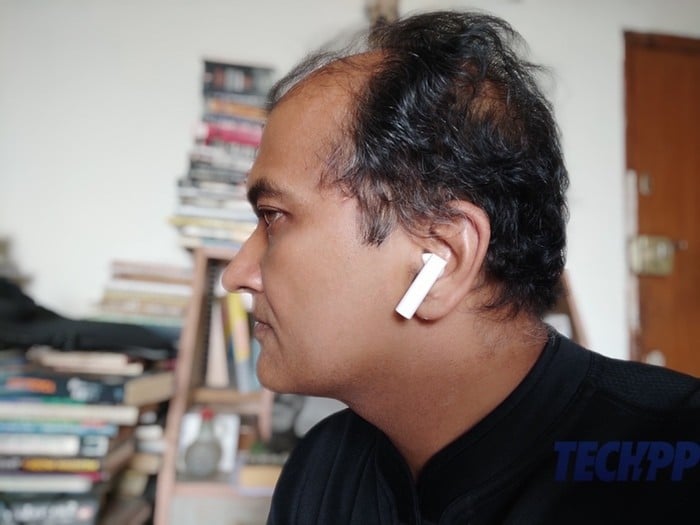 So should you be going for the Mi True Wireless Earphones 2? Well, at Rs 4,499 if your budget is below Rs 5,000 (once again, we would consider extending it to even Rs 7,500) and you covet sound quality, then these are in a zone of their own. We would say that they even have a slight edge in terms of sound quality on the Oppo Enco Free, which are more expensive, but come with a slightly better build and better battery life, and have dust and water resistance too. Those with an interest in good sound minus wires on a relatively tight budget can also consider the 1More Stylish True Wireless Earbuds, which offer better battery life and support for apex codec, even though they do not quite match up to what Xiaomi offers.

In fact, while the Mi True Wireless Earphones get a lot of things right – we like the stem-handy design and the general “feel” of the earphones – at the end of the day, what we really love about them is the sound they deliver. Which is what earphones should be about really.

Want to get truly unwired for sound, on a relatively tight budget? Go for these.

Review Overview
Was this article helpful?
YesNo
TechPP is supported by our audience. We may earn affiliate commissions from buying links on this site.
Read Next
Skullcandy Mod Review: Betting on doing the basics well
#Mi True Wireless Earphones 2 #review #TWS #xiaomi