If you belong to the pre-2000s generation, cassette players were a big deal in India before CDs and DVDs were introduced. Most albums were available in the form of audio cassettes that required a cassette player to play which more often than not looked like an elliptical box with the cassette going into a compartment in the middle flanked by stereo speakers on either side and a convenient handle to carry it around. If you or your family owned one of these, chances are, it was made by a brand called Aiwa. 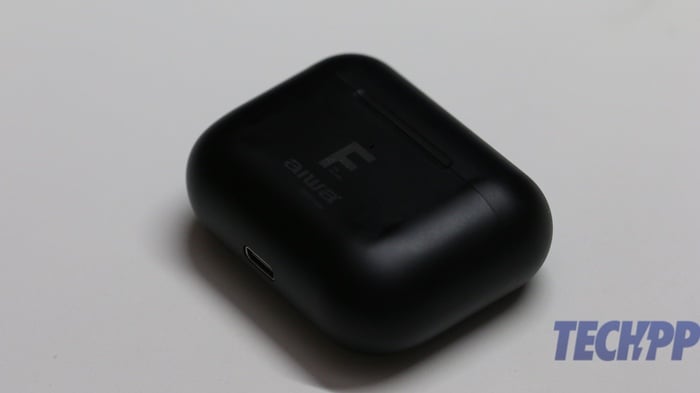 Aiwa is a Japanese brand that was hugely popular all over the world, including India, and was almost synonymous with these cassette players and tape recorders. They even made a hi-fi audio system that also gained a lot of popularity in India as they came with a 2:1 or 4:1 channel speaker setup as well as the ability to playback VCDs which were also new in the country. However, as technology evolved and gadgets like the Walkman became popular, Aiwa started to fade into oblivion. Audio files were available on USB drives and DVD players had started to become more popular and Aiwa lost its course in the country.

Fast forward to 2019, Aiwa tried to make a comeback into the Indian market by launching a few TVs, but these were licensed to other manufacturing partners who just stuck the Aiwa logo onto these TVs. After the launch of the TVs, again, Aiwa was nowhere to be seen in India. Two years later, in 2021, Aiwa is trying to make another comeback, this time with its own products and an attempt to establish Aiwa India as a brand that is directly associated with its parent company in Japan. They are kicking things off with two products in a category that they used to rule once upon a time – audio.

The audio accessories market in India has seen a boom lately with more and more brands launching both neckband style Bluetooth earphones as well as TWS or Truly Wireless Stereo earbuds at affordable price points. Aiwa’s new products also fall into this category. However, coming back from a long hiatus, Aiwa is competing against established brands like Realme, Oppo, and Boat which already have a considerable market share. Do these new audio products from Aiwa help them make inroads into the Indian market again or will they only be remembered for their cassette players back in the day? Let’s find out.

Aiwa sent us a pair of their new premium-segment TWS earphones with a rather unusual name: AT-X80FANC along with a pair of affordable neckband style earphones, the ESBT-460. We have been using both products for almost three weeks now and while ideally, we would review the two products separately, we decided to combine the two into the same article since both products have a lot in common despite coming in at different price points. We’ll first deal with the TWS earphones since they are the ones in trend nowadays.

If you paid attention to the naming scheme Aiwa has chosen to go with for these earphones, the last three characters indicate the presence of ANC or Active Noise Cancellation which is an added bonus, at least on paper. In reality, it makes a negligible difference on the Aiwa AT-X80FANC unless you are listening to audio at full volume. But then, listening to songs at full volume using any pair of in-ear style earphones already provides a level of passive isolation that is indistinguishable from the one provided by ANC on these earphones from Aiwa.

Having dedicated mics for ANC means you can also use the earphones in transparency mode which amplifies the external sound and even that is just satisfactory. Talking about ANC and sound quality right at the beginning of the review may seem a little odd given that most of our reviews begin with the build quality and design. However, since ANC is being marketed as a premium feature and the potential buyers of this product would be considering it for that added benefit, we thought it was apt to address it right at the beginning.

While the ANC capabilities are average just like it is on most mid-tier TWS earphones, we expected the sound signature to make up for it. However, the Aiwa AT-X80FANC produces a muddy sound with overpowering bass and unclear vocals. Some might argue that the emphasis on bass is keeping in mind the affinity towards lower frequencies that Indians have and is quite clear with some other products too from brands like Boat and Xiaomi. But the extra bass coupled with slightly muffled audio surely does not sound very appealing, especially at the price point of Rs. 8,000. 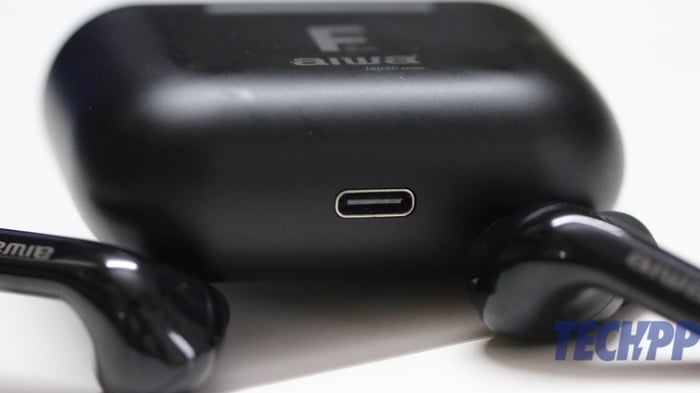 The instrument separation isn’t the best either but the volume levels are pretty good. While the audio quality is not that bad, it does not justify the asking price and hence disappointed us. Call quality was good for the most part except that at times, the other party complained that my voice seemed like it was coming from a distance.

Now that the sound quality did not match our expectations when compared to other products priced similarly or even lower, we expected the Aiwa AT-X80FANC, whose model number I now know by heart at this point, to have modern features that match its competition. However, in this regard too, the earphones from Aiwa fall short. For starters, there is not in-ear detection which is a staple even on some earphones around the Rs. 2,000 mark. Then, there is no companion app to go along with the earphones so you cannot customize the touch controls.

Touch controls, thankfully, are present and work just like any other pair of TWS earphones. If you get the right spot, the function will be triggered, or else you have to tap it multiple times to get it to work. You can play/pause music, accept and reject calls, switch tracks, turn on/off ANC, and activate a dedicated gaming mode. The gaming mode reduces latency which already by the way is pretty good, but there is no specific value described. We still wouldn’t suggest using a pair of wireless earphones for gaming, but they work just fine for watching videos or movies. 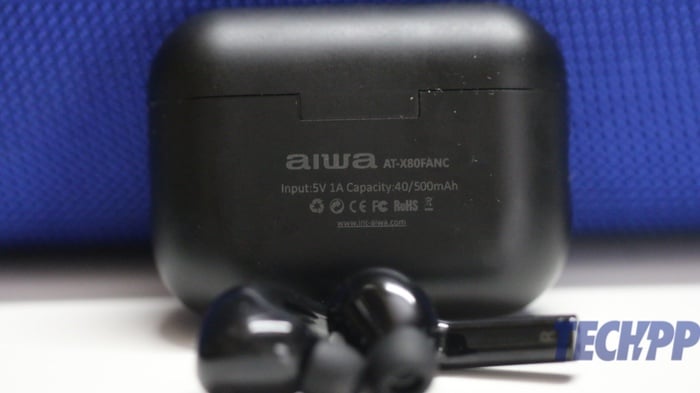 Sadly, the list of compromises does not end with the lack of features. The Aiwa AT-X80FANC does not have any sort of water or sweat resistance which means while you can wear them for workouts, you cannot be assured that they will survive through moisture. Moreover, the case is made of matte plastic that feels rather cheap and accumulates a lot of fingerprints. The earbuds are glossy and feel slightly better to look at, and the fit of the earbuds is easily the best aspect about them. They are comfortable to wear even for long periods of time and do not fall out easily.

Battery life is decent too with the earbuds lasting around 3.5 hours on a single charge. The case can top-up the earbuds 3 times before running out of juice. The case charges via a USB-C port and can be fully charged in under an hour which is good. The case is pretty compact and can be carried around in your pocket easily. The Aiwa AT-X80FANC is available in two color options – Black and White. If you do plan to get one, we suggest getting the white variant as it would show lesser fingerprints and look better in our opinion.

But the real question is, should you buy the Aiwa AT-X80FANC TWS earphones for Rs. 8,000? Well, they are on sale on Amazon for Rs. 500 lesser, but even at Rs. 7,500, we cannot recommend these earphones since there are much better-sounding pairs of TWS that are available for the same price or even lesser. The Lypertek Tevi, Oppo Enco X, or even the much cheaper Oppo Enco W51 have better sound quality, build quality, and offer better features and more value for your money. Aiwa should have priced these more competitively given the tough competition in the Indian market or at least perfected their sound signature and ANC capabilities. 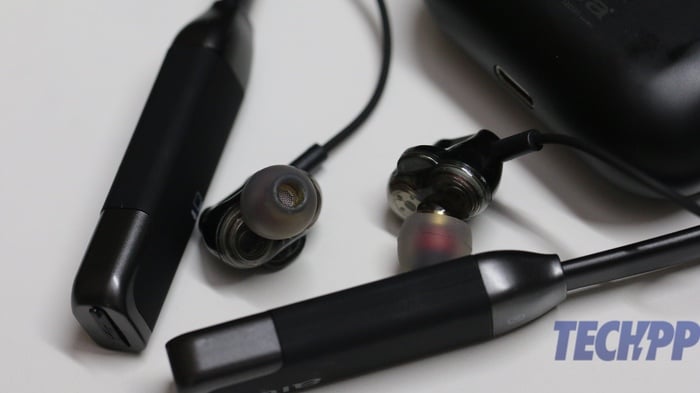 Like we said at the beginning, the TWS earphones and the neckband style earphones from Aiwa have some similarities and it, unfortunately, starts with the audio quality. Just like the TWS, the ESBT-460 sounds average and does not fare as well as some other neckband earphones in this price range or even ones that are more affordable. The sound stage is poor and the vocals sound slightly muffled. The bass in this case is slightly lacking, unlike the TWS earphones. The Oppo Enco M31 is a much better pick than these neckband earphones from Aiwa if sound quality is your primary requirement (what else would it be for a pair of earphones?).

The Aiwa ESBT-460 has one neat trick up its sleeve though – an SD Card slot. The earphones themselves can double up as an MP3 player so if you like listening to songs offline without your smartphone, you can load songs into an SD card and plug it directly into the earphones. This is quite useful if you want to go for a walk or a run but don’t like carrying your phone with you. Another cool feature is that the neckband portion of these earphones vibrates every time you receive a call to notify you and we found this quite helpful. The call quality was good but a lot of background noise was also being captured by the mic. 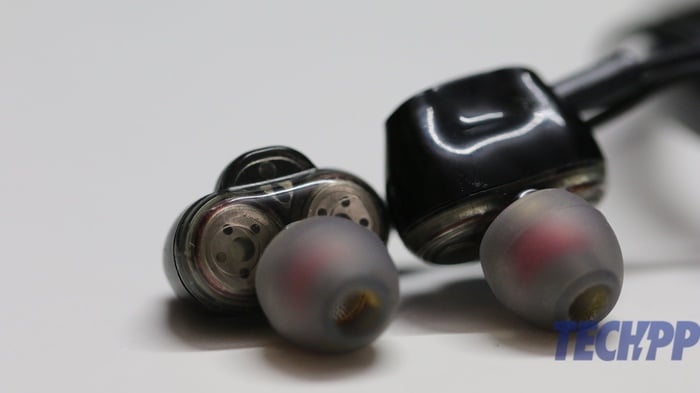 Other than that, the Aiwa ESBT-460 is just like any other pair of neckband earphones. It has a soft plastic bendable band that rests on your neck and has adjustable wires connecting the earbuds. They are comfortable to wear around your neck even for long periods of time. One of the sides of the neckband houses the Aiwa branding while the other has the in-line controls to play/pause music, controls volume, and skip tracks along with the SD card slot. One feature we miss from other neckband earphones is that there are no magnetic ends on the earbuds to automatically play/pause music.

In terms of battery life, the Aiwa ESBT-460 can last you about 14-15 hours on a single charge and while there are other neckband earphones offering upwards of 20 hours of battery life, 15 hours is still plenty given that charging them doesn’t too long either. While charging times may be good, the method of charging is a slight letdown. The neckband earphones charge via micro-USB while the TWS earphones used Type-C. Micro-USB in 2021 should be a no-go especially if a product is priced close to Rs. 3,000. To Aiwa’s credit though, the earphones come with a high-quality braided micro-USB cable along with a nice carrying pouch. 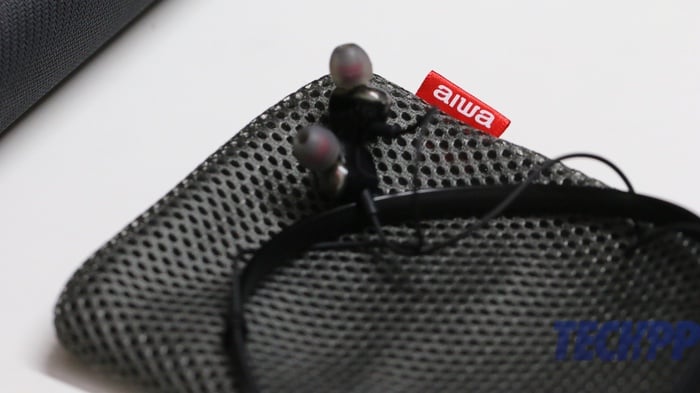 Asking the same question for the Aiwa ESBT-460, should you buy it or not for Rs. 2,799, the answer is slightly less straightforward than it was for the TWS. If you really, really want an SD card slot on your earphones, this pair from Aiwa can be considered. Otherwise, just as a pair of wireless neckband earphones, there are much better sounding pairs out there like the abovementioned Enco M31 from Oppo which retails for Rs. 2,000 but is now on sale for Rs. 1,500 at the time of writing. The OnePlus Bullets Wireless Z is also a good option to consider.

Given the slight nostalgic attachment with Aiwa having grown up listening to songs on cassettes using their players, we were hoping Aiwa would deliver with their comeback in India, but these products did not stand up to our expectations especially when you consider the competition present in India. Since this is their first attempt at making new audio accessories, we hope Aiwa takes feedback from Indian consumers and improves its products in the next iteration.