Xiaomi is the biggest name in the smartphone market in India and has been dominating the space for some time now. But its success goes beyond smartphones. The brand has branched out in a number of directions and has an extensive portfolio comprising a variety of products, ranging from televisions to beard trimmers to air purifiers to cables. And Xiaomi recently added a pretty big (quite literally) gadget to this list. 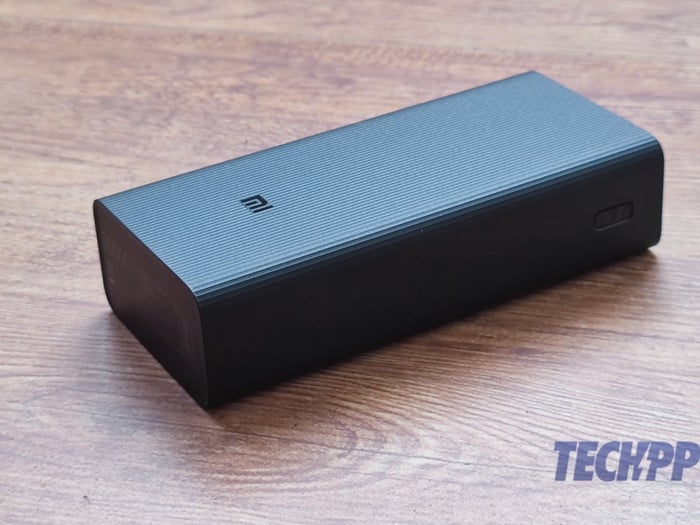 Earlier this year, Xiaomi unveiled a power bank called the Xiaomi Mi Boost Pro. It was not your run-of-the-mill power bank. It came with a massive 30,000 mAh battery capacity which is a rare phenomenon even with brands going mAh crazy on smartphones – even most power banks themselves tend to be around 10000 mAh to 20000 mAh. The company had announced the power bank via a crowdfunding platform with a price tag of Rs. 1,999 and aimed to sell 5,000 units of the device. Recently the power bank went from crowdfunding to market sale stage and was announced at a discounted price tag of Rs. 2,499.

But do you need to open your gadgety’s account with this sort of power? And is bigger always better?

A brick that went to the gadget gym

“It was born in the family of bricks but did not want to limit itself to being just another brick in the wall. Hence, the Mi Boost Pro worked hard day in, day out, joined a multinational company (check out their gadget gym) and transformed itself into a powerful power bank”

The story is fictional, but looking at the Mi Boost Pro and holding it, you will surely get what we mean when we say it was probably born in a family of bricks. Weighing more than half a kilo (640 grams) and measuring 154.5 x 72.3 x 38.9 mm, the power bank is massive. Well, it would be – housing 30,000 mAh is no light task. 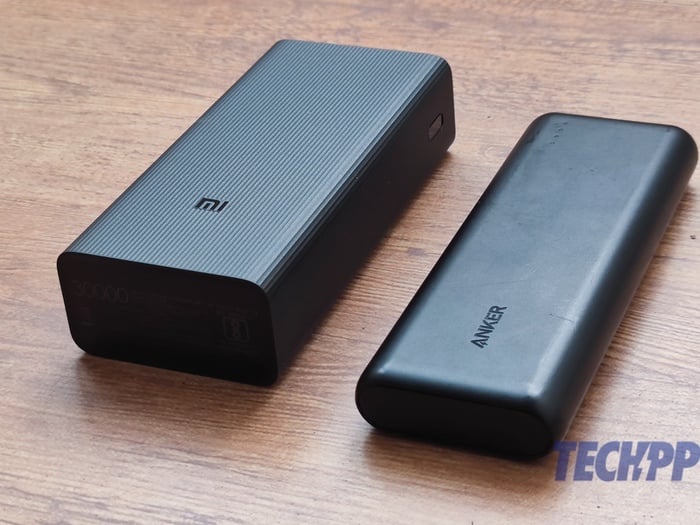 It comes with a textured, anti-skid finish which gives the device a much-needed, strong grip (Imagine dropping a power bank this heavy – our concern is both for it and the surface or person it would land on). It has four ports on the side – one is a micro USB port, one is a USB Type C port, while the other two are standard USB ports. Of these, three ports can be used to charge other devices – the micro USB port is used to charge the power bank itself, although you can also use the Type-C port to do so. There is a micro USB to USB cable in the box as well.

Right next to the ports are four tiny LED indicators that indicate the amount of charge left in the device, while a power-on button sits on the side. As the weight of the power bank suggests, it is one heavy device to hold and use, which obviously hampers its portability. On the flip side, with all that weight, you can always double up the charger as a brick and use it as a self-defense weapon – just saying.

Apart from this, there is not much to the looks of the device. There is a Mi logo on the front, but other than that, it is mostly just a plain, black brick of a charger. And despite its plastic build, it feels as solid and tough as one. 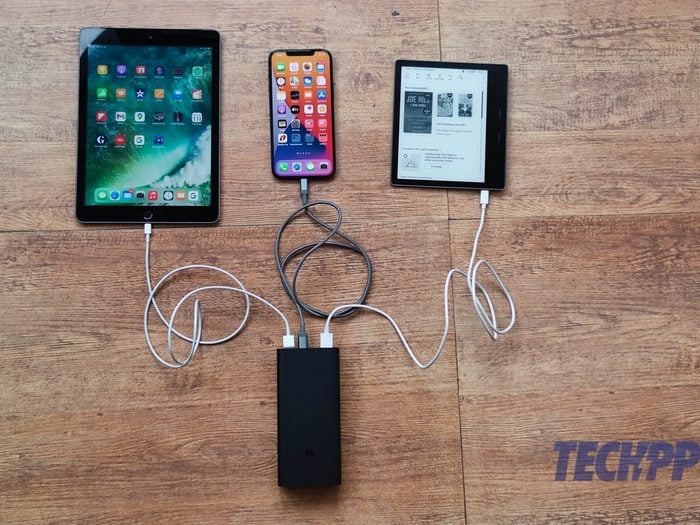 While power banks seldom charge as fast as plug-in chargers, the Mi Boost Pro can charge your smartphone with up to 18W fast charging, which is actually faster than some of the plug-in chargers that we get with smartphones. The power bank also comes with multiple charging support– 5V/2A, 9V/ 2A and 12V/ 1.5A. It is universally compatible, which means you can charge different devices simultaneously. There is also a low charging mode which is perfect for charging low power-consuming accessories like earbuds or smartwatches. You just have to double press the power button, and the charger will go into a 2-hour low charging mode. 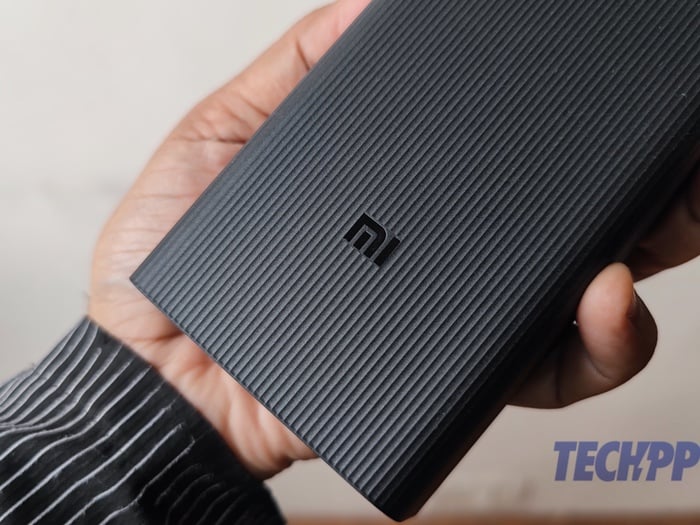 And all of that works. With all those mAhs, we were able to charge:

And we STILL had some charge left for juicing up a Poco F1 (yes, we do keep using older devices, so judge us).

We also used the power bank to charge our iPad Pro 9.7-inch (after recharging the power bank), and it actually charged it slightly faster than our plug-in charger usually would. What’s more, It may only be able to keep them awake, but the Mi Boost Pro can certainly keep your notebooks from shutting down. It did not increase the battery of our MacBook Air but kept it a steady 12 percent for about two hours on one occasion. And still had enough left to charge a couple of phones. Handy when you are running low on battery on your notebook.

It gets charged fast too…but the hulk’s bulk creates issues as well! 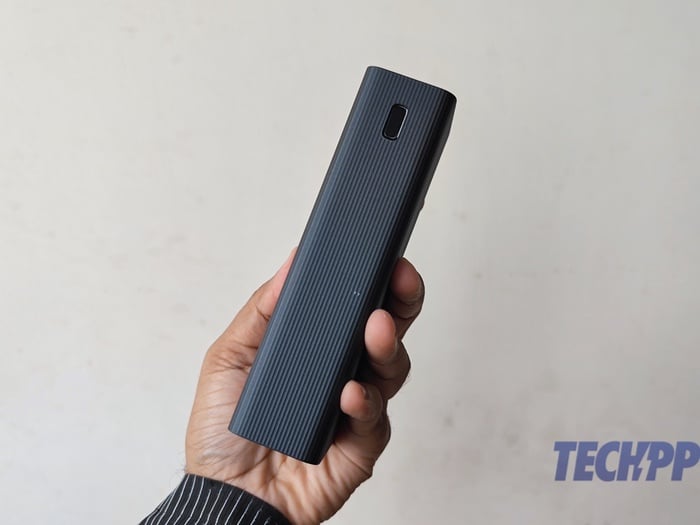 With a size like that, recharging is generally a pain, but that is definitely not the case with Mi Boost Pro. The device comes with 24W fast charging support, which can easily get charged completely under 8 hours, provided you use a type C to type C cable (we wish they had put one in the box too). This means you can basically put it on charge at night and use it the next day – wait, make that the “next week” – for all your charging needs.

The only problem we had with the device is that all those mAh costs the Mi Boost Pro its portability, which means it is not very handy, ‘hold it along with your phone and walk around’ kind of power bank. It is perfect for road trips and those who are not blessed enough to have a socket right alongside their beds, but it is not something you can just pick and move with easily. It cannot fit into small sling bags or pockets like some power banks, and even in small backpacks, you will feel its weight. And, of course, that 30000 mAh capacity means you cannot take it on board an aircraft (the folks there draw the line at 20000 mAh).

One bank to charge them all 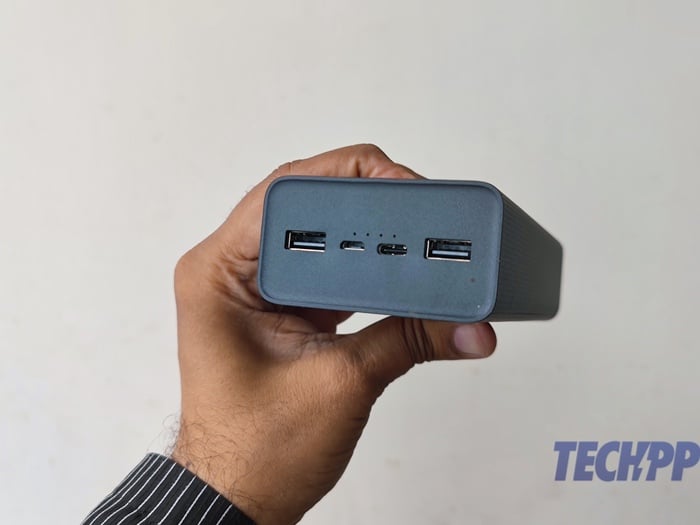 This is a beast of a power bank that can handle all your charging needs all by itself without breaking a sweat. What’s more, its build quality is excellent (thank God it is in black), it charges devices briskly, has a special mode for slower charging devices and gets charged itself very fast (for its size). If you are looking for more portability than power, then the Mi Boost Pro might not be for you, but if you can deal with the heft and just need to have a one-stop-shop for all your charging needs, this one is as real a deal as it gets.

JRR “Lord of the Rings” Tolkien might well have said:

One bank to charge them all,
With enough ports to plug them,
One bank that empowers them all,
Through the cables that bind them…

Review Overview
Was this article helpful?
YesNo
TechPP is supported by our audience. We may earn affiliate commissions from buying links on this site.
Read Next
iQOO 11 5G Review: Does It End Your Quest for the Ultimate Smartphone?
#Mi Boost Pro #Mi Power bank #Power Bank #review