Got an iPhone? Then it is a fair chance that one of the first things you will head out to get is a power adapter or a charger because Apple got rid of them from the box a few years ago in the name of eco-friendliness. While you would be spoilt for choice when it comes to selecting a charger for your iPhone, we feel that you could skip the fuss and simply go for the rather elaborately named Stuffcool PB9018W Magnetic Wireless Powerbank, which Stuffcool claims is the “First Ever Made In India 10000mAh Magnetic Wireless Powerbank for iPhone 12/ 13 / 14 Series.”

Yes, we know that we are recommending a powerbank and that too one that is priced at Rs 4,990, ahead of a conventional charger. Hear us out. Technically, the Stuffcool magnetic wireless power bank is indeed a 10,000 mAh power bank, but it does more than enough for us to rank it as a charger in its own right. Well, it does charge an iPhone, and it does so through a wire as well as without it.

It comes with a very compact form factor. For a 10000 mAh power bank, the Stuffcool PB9018W is remarkably easy to carry and will fit into most pockets – it is smaller in size than an iPhone 13 mini, although it is much thicker and weighs close to 200 grams. It is made of sturdy, non-glossy plastic and is minimalistically designed – we got the blue variant (you also have white and grey), and while it would not turn heads, it had a solid, substantial feel to it.

The power bank has a USB Type C and a Type A port and a button to switch the bank on and off on the top. The front (we assume the side with Stuffcool branding on the top is the front) has a wireless charging area, while on the upper part of the back is a display that shows the amount of charge left in the power bank. Pretty standard. What is special is the fact that the wireless charging area on the front of the power bank is magnetic. So it can not only charge any device you place on it wirelessly but can also attach itself wirelessly to the back of an iPhone from the 12/13/14 series – those which have a magnetic back (MagSafe). 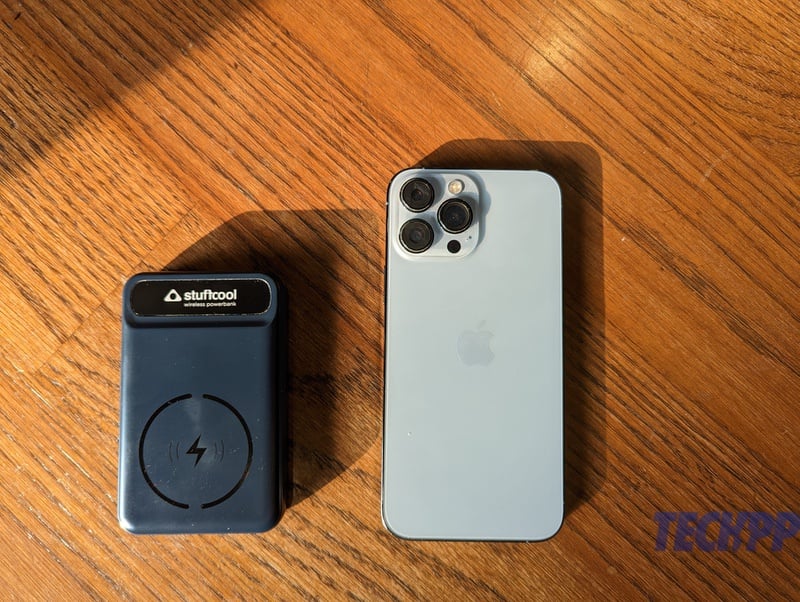 This is where that compact form factor comes into play. The Stuffcool PB9018W is small enough to be stuck on the back of an iPhone and to charge it wirelessly even as you continue to use it. The magnetic connection is pretty strong as long as you have no case on your phone – cases do weaken it a little. The whole package does get a little heavy, but it is a whole lot more convenient than using a phone with a dangling wire connecting it to a large-ish power bank.

The Stuffcool PB9018W can easily recharge an iPhone 14 Pro Max even while you are using it. It could take a while, though, as the iPhones charge wirelessly only at 7.5W through this power bank. It took over three hours for the iPhone 14 Pro Max to be completely charged using the power bank, but the notable point was that we could literally pick up and use the phone whenever we wanted without having to worry about a cable! Need more speed? Use the USB Type C port with a wire and get up to 20W of charging speed, which gets the iPhone 14 Pro Max to about 50 percent from zero in about thirty-five minutes. The power bank can charge AirPods wirelessly too, which is a huge bonus. 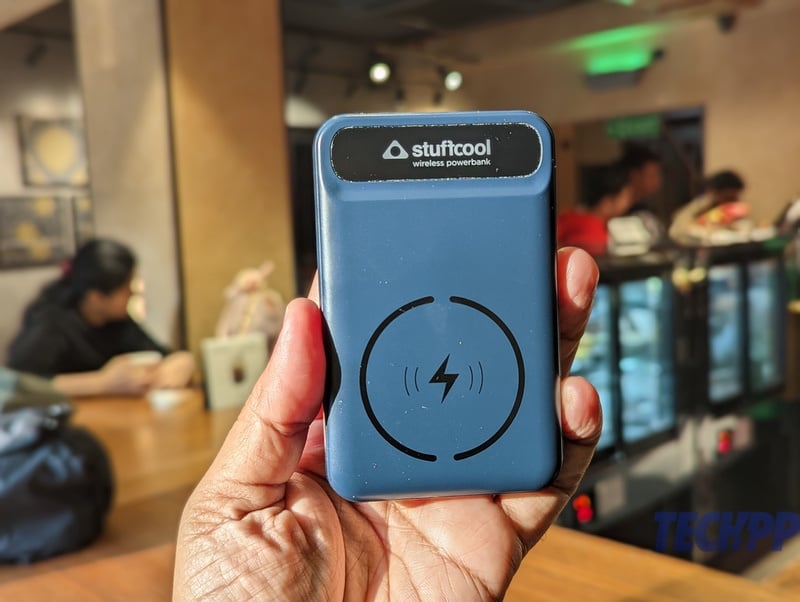 The Stuffcool PB9018W might be tailor-made for iPhones, but it actually shows a great turn of speed with Android devices. It charges supported Android devices at 15W wirelessly and at an impressive 22.5 watts through the Type A port and 20W from the USB Type C port. All TWS supporting Qi charging can also be charged using the power bank. You cannot attach the power bank to the back of an Android phone like you can with an iPhone – perhaps Stuffcool could have thought of bundling a magnetic ring in the box like DailyObjects did with one of their wireless charging stands?

The power bank itself supports 18W charging through the USB Type C port and takes about three hours to be charged, which is impressive. Interestingly, you can actually charge your devices while charging the power bank itself. This is why we actually feel this is not just a great power bank for the iPhone but actually doubles as a decent charger in its own right. 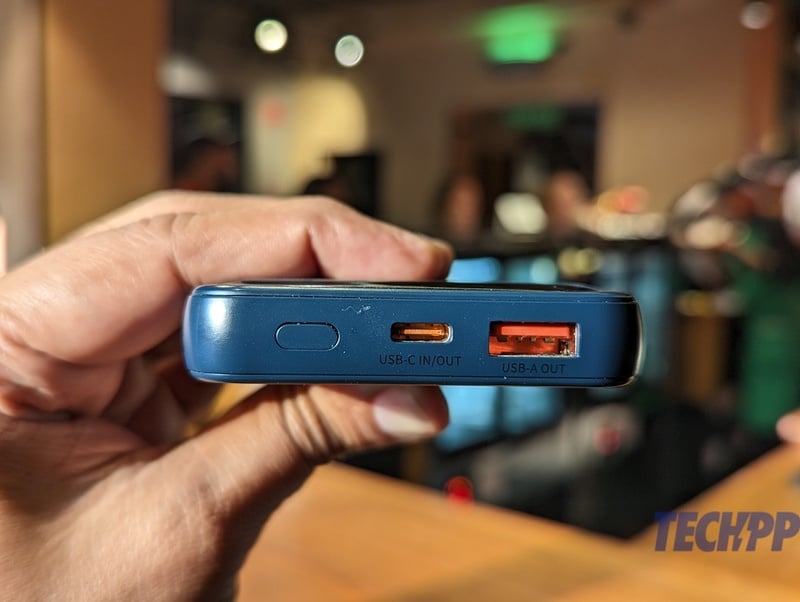 It does have its issues – the display seems a little erratic in terms of showing the amount of battery left (at one stage, it would show us only 100 percent and 33 percent, but then it seemed to correct itself) and is not very visible in daylight. Wireless charging topping off at 7.5 percent for the newer iPhones is also a bit of a downer; the power bank itself is definitely on the bulky side and almost doubles the weight of the already-hefty iPhone 14 Pro Max.

But then again, there is nothing quite like this in terms of capacity, design, performance, and price. We actually think that it is a better power backup option than carrying an adapter or charger for an iPhone, simply as it saves you the need to find a power point or even a cable. You could easily survive half a week with this in your pocket alongside an iPhone 13 Pro Max or 14 Pro Max.

And, of course, you can use any USB Type C charger to charge it, even the one that comes with your notebook or tablet! No need to walk around with a lightning cable and an adapter. 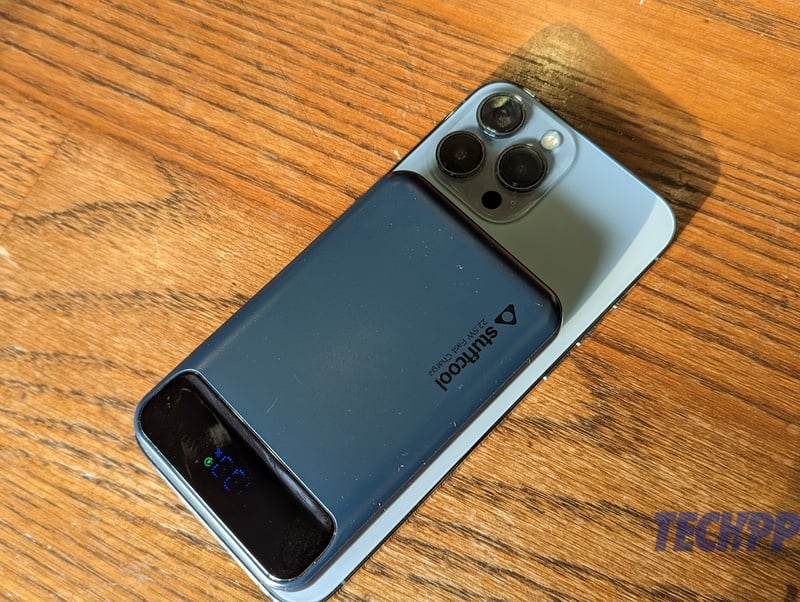 This brings us to the price of the Stuffcool PB9018W. At Rs 4,990, the Stuffcool PB9018W is expensive by the standards of 10000 mAh power banks with wireless charging (Xiaomi has a 10000 mAh one for about half the price) but bring in that compact form factor and the magnetic connectivity, and the competition starts to fade. Apple’s own MagSafe Battery Pack charges wirelessly at a much more impressive 15W and blends right into the iPhone ecosystem, showing battery status on the iPhone itself but comes at an eye-watering Rs 12,000 with a capacity of a mere 1460 mAh. Belkin’s Boost Charge magnetic wireless power bank is sleeker and comes at Rs 3,999, but its 3500 mAh capacity is again underwhelming. Spigen’s magnetic fast charging power bank comes for Rs 2,699 but again has only a 5000 mAh battery.

Unless you are absolutely obsessed with keeping your iPhone as light as possible, we would recommend getting the Stuffcool PB9018W not just as a power bank but as a charger itself. It takes about three hours to charge through a 20W charger and keeps your iPhone topped up throughout the day (and sometimes even more) without the need to carry any cables. It might be a little expensive as a portable power bank for Android, but for the iPhone 12 and above (SE excepted), it is the perfect portable power bank- compact, convenient, and efficient.

Review Overview
Was this article helpful?
YesNo
TechPP is supported by our audience. We may earn affiliate commissions from buying links on this site.
Read Next
iQOO 11 5G Review: Does It End Your Quest for the Ultimate Smartphone?
#Magsafe #Magsafe Powerbanks #review #Stuffcool #Wireless Charger