Huawei entered the true-wireless earbuds market in 2018 with the launch of the FreeBuds. Soon after, it released a bunch of TWS earbuds like the FreeBuds Pro and the FreeBuds 3i, both targeted towards different price segments and catering to different audiences.

While the FreeBuds Pro is currently Huawei’s premium TWS earbuds with a wide range of features and an appealing audio profile, the FreeBuds 3i has been more of a budget offering. And now, it’s joined by the all-new FreeBuds 4i, which is Huawei’s latest attempt at bringing top-of-the-line features at a relatively lower price point.

But is the FreeBuds 4i a solid proposition, and does it have what it takes to be your next pair of TWS earbuds? Find it out in our Huawei FreeBuds 4i review.

FreeBuds 4i: Design, Build, and Fit

At first glance, the FreeBuds 4i looks similar to most TWS earbuds in the market. It’s a quite familiar design that seems to be inspired by the pebble shape, as can be seen on many earbuds these days.

For starters, the charging case is made out of plastic and has a glossy finish, which feels smooth to touch. But, it does have a few caveats. Being prone to scratches and being extremely slippery are two prominent issues with such a finish. Not to mention, the same finish extends to the earbuds too, which makes it a little harder to get them out of their slots in the charging case.

Upfront, the case has the Huawei branding, with an LED right below it for battery life (and charging) indication. It uses a plastic hinge for the lid on the back, which feels sturdy and functions well. Similarly, the lid closes magnetically and has a pleasing click sound when it’s shut. However, what’s worth pointing out is that opening the case with one hand can be a little awkward.

At the bottom, the FreeBuds 4i case features a USB-C port for charging the battery.

Moving on to the earbuds themselves, Huawei has done a pretty good job with the design—albeit it’s a standard in-ear style stem earbuds design, the overall build quality and the fit on these is impressive. Not just that, though, there are a couple of distinct, subtle differences with the design of the earbuds that affect their functionality—in a good way.

For one, the earbuds are more angular, which allows for a comfortable fit and ensures that they sit inside the ear canal and don’t fall off easily. And two, the stems of the earbuds are slightly flattened out to increase the surface area of contact for touch controls so that it’s easier to perform gestures on them with better accuracy. 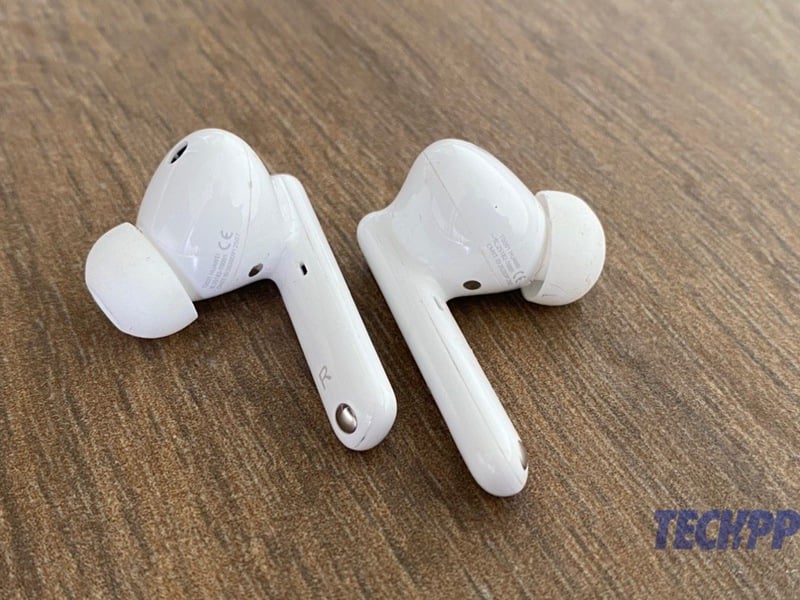 Speaking of the fit, like we just mentioned, the FreeBuds 4i earbuds sit comfortably in the ear and have a good fit. We didn’t experience any discomfort wearing them during calls or long music listening sessions. Similarly, wearing them during generic (home) workouts was no problem for us either, and the earbuds did a good job of staying in the ears and not falling off most of the time.

FreeBuds 4i: Performance and Features

Like most Bluetooth earphones these days, the FreeBuds 4i also relies on Bluetooth 5.2 for connectivity. It pairs with both Android and iOS devices easily and does a good job of keeping a strong connection. We used the earbuds (connected to an Android smartphone) kept in another room and were able to listen to music/podcast uninterrupted, without any jitter.

As for audio-video synchronization, the FreeBuds 4i showed no noticeable syncing issues in our testing. We used them with both Android and iPhone, and at no point did we experience any latency issues on them. 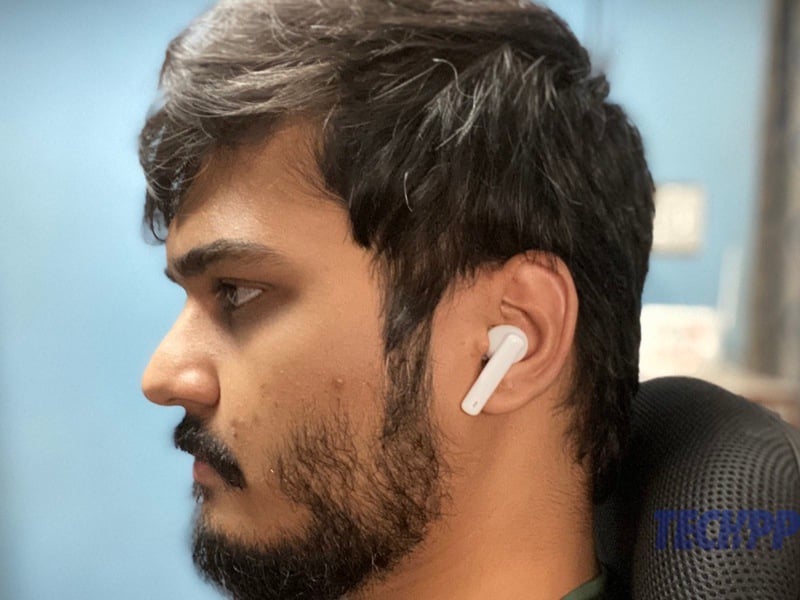 Huawei offers touch controls on the FreeBuds 4i to let you access its various modes and features easily. For this—and to simplify things and avoid confusion between using basic features and enabling noise control modes—it relies on two types of gestures: double-tap and touch & hold. Double-tapping the top of the stem allows you to play/pause audio, change track, and wake voice assistant, whereas touching & holding it lets you cycle through different noise control modes like ANC, awareness, and off.

We found these controls on the FreeBuds 4i to be very responsive and accurate. Be it changing tracks or switching noise control modes, the touch controls on the earbuds worked flawlessly almost every single time. And, never in our testing did they register ghost touches, which is a common problem that a lot of earbuds—with single-tap or swipe gestures—often exhibit. 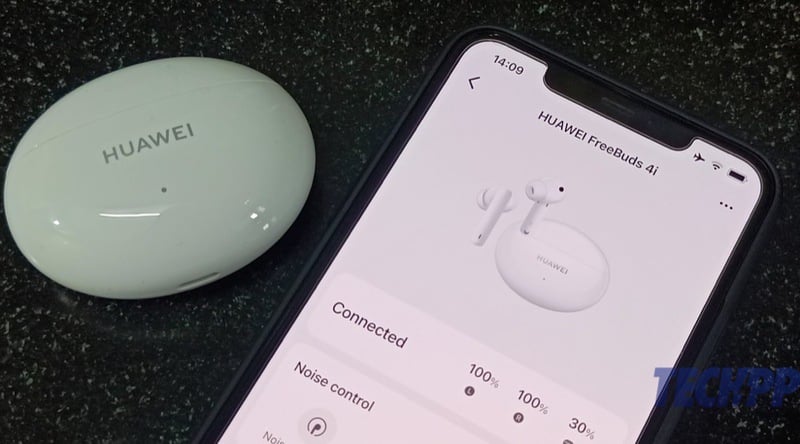 Moving on to the biggest highlight of FreeBuds 4i—ANC (as well as the awareness mode)—Huawei has done an excellent job. The FreeBuds 4i has very effective noise canceling that manages to significantly block out a broad spectrum of noises, so you can listen to music peacefully or just put the earbuds on to block out outside noise in an outdoor setting.

Generally speaking, ANC is usually hard to pull off for most companies, irrespective of the price at which they are selling their earbuds. For, aside from getting the earbuds to cancel out external noise effectively, it’s also important for the feature to not interfere with the sound quality, which the FreeBuds 4i has managed to do really well.

As for the awareness mode, similar to ANC, this mode also lives up to the company’s claims and manages to bring in the outside noise into the earbuds, so you can stay aware of your surroundings in situations when you need to hear what’s happening around you/while you’re performing certain activities. And, similar to ANC, this mode doesn’t affect the sound quality of the earbuds either.

Another essential feature of the FreeBuds 4i is wear detection, which automatically pauses/resumes audio when you remove earbuds from your ear or put them back in. And, similar to other features, we’re impressed with its working as well, that too, on both Android as well as iPhone.

Huawei also offers a companion app for the FreeBuds 4i called Huawei AI Life. Using this app, you can adjust the gesture settings for your earbuds, select noise modes (ANC, awareness, and off), enable/disable wear detection, and upgrade the earbuds’ firmware. Plus, you can view the battery levels for each earbud individually, as well as their charging case. Advanced options like equalizer are missing on the app, so you have to resort to using something like the Wavelet app if you want to tune the sound.

We’d like to, however, point out that the Huawei AI Life app works better on iOS. We weren’t able to get the FreeBuds 4i connected to the app on Android, and strangely, the earbuds don’t even show up in the app. 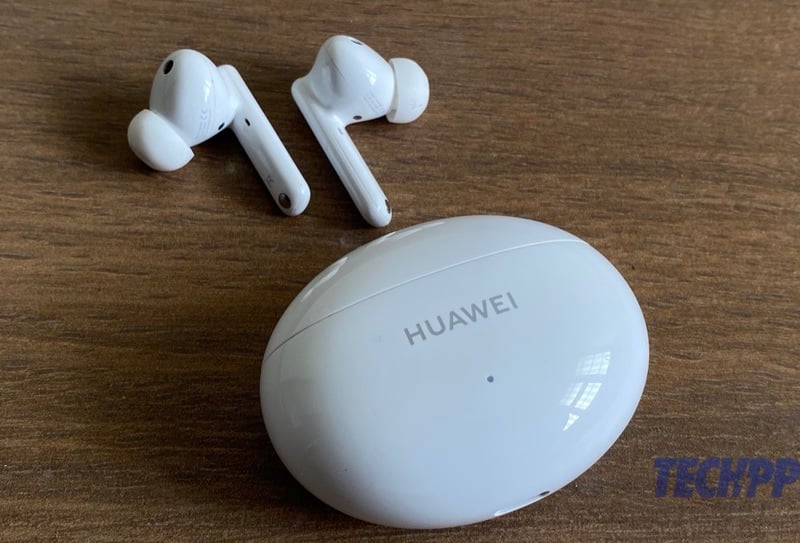 Sound is the most significant aspect for any earphone, especially if you’re someone who places a high value on sound quality when buying an earphone/headphone.

The FreeBuds 4i is almost up there among the best-sounding TWS earbuds (in its price range) in this regard. On the inside, the earbuds pack in 10mm dynamic drivers featuring what Huawei calls “PEEK+PU polymer diaphragm”, which is said to be “tuned to deliver high-quality pop music”.

As such, the earbuds exhibit a slightly bass-forward sound: one that favors frequencies in the mid-to-lower end of the spectrum. However, that said, despite its leaning towards a bass-heavy signature, the earbuds lack the punch one expects from earbuds with such a sound signature. In short, don’t expect to get a thumping bass on these earbuds.

As for reproducing high frequencies, the FreeBuds 4i does a reasonably decent job in this aspect. It’s worth pointing out, however, that although the high frequencies sound clear, they aren’t very pronounced. In some titles, we even experienced a slightly muffled high-end due to the overcrowded mids that occasionally bled into the high-end frequencies and prevented it from reaching the peaks. 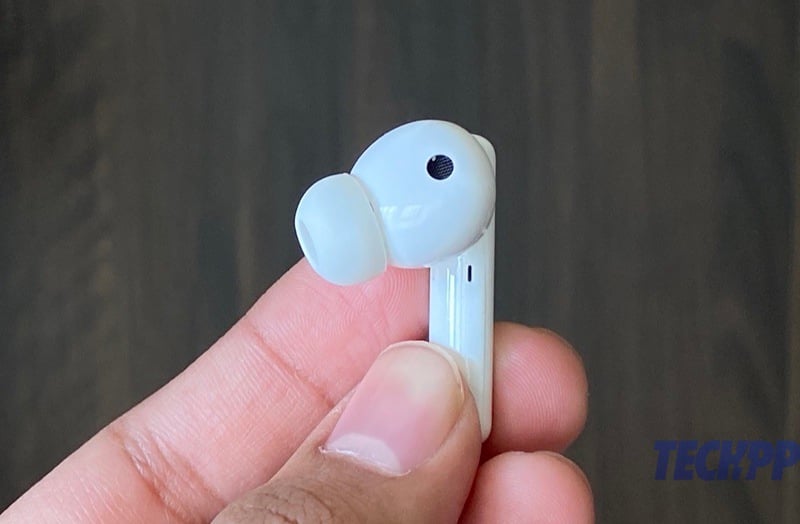 But this also means the vocals sound clear and distinct on the FreeBuds 4i, which makes it reasonably good for listening to vocal-rich songs—in addition to pop—as well. Similarly, instrument separation is also decent—except in certain titles with dense compositions.

In summary, if you listen to a lot of pop music or if you like listening to other genres but don’t necessarily want a punchy bass, the FreeBuds 4i is a good fit for you.

Besides sound quality, another crucial aspect to consider when buying a pair of earphones is call quality. With the FreeBuds 4i, the calling experience is adequate, and we didn’t encounter any issues with it during testing whatsoever. 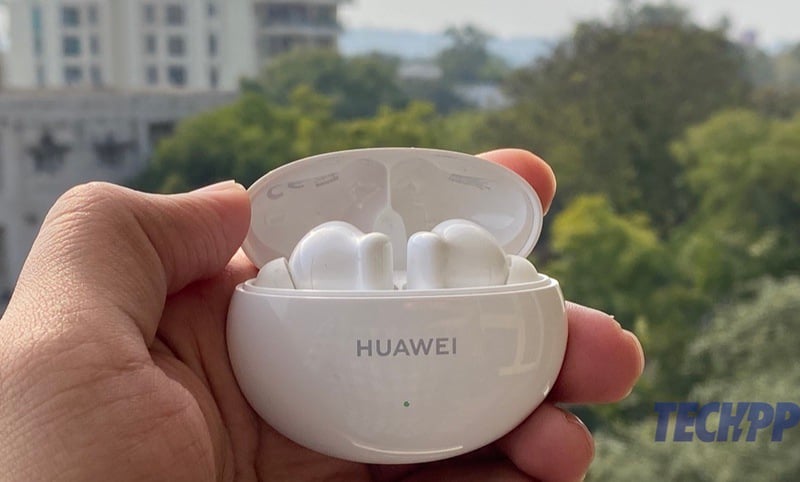 While Huawei claims 22 hours of music playback (with ANC turned off) on the FreeBuds 4i, which they are able to fulfill quite well, it doesn’t live up to expectations today when competitors are putting bigger capacity batteries inside the charging case to offer longer battery life.

Speaking of listening time on the earbuds themselves, the company promises 10 hours (without ANC) and 7.5 hours (with ANC). We were able to get around 8.5 hours with ANC usage for a moderate proportion of that time during our testing. And, when the earbuds ran out of battery, fast charging helped top it up quickly. (Huawei bundles a USB-C charging cable with the FreeBuds 4i). 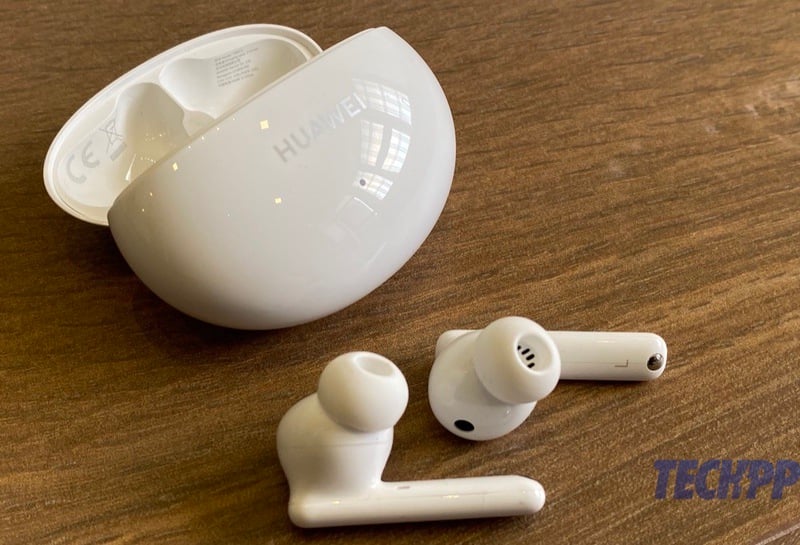 For a price of Rs 8,266 (sometimes goes below Rs 8,000), the FreeBuds 4i is definitely a good option for someone looking for a pair of ANC earbuds. It ticks most of the checkboxes you’d want in an affordable TWS, be it a good build, functional ANC, and good audio, so you aren’t missing out or compromising on too many things.

However, that said, if sound quality is your number one priority, there are several other options in the market under Rs 10,000 like the OnePlus Buds Pro, Lypertek Tevi, or the Oppo Enco X. A couple of these also offer a solid battery life and effective ANC, so you can consider them for better those reasons as well.

In summary, for what the FreeBuds 4i offers, it may seem a little overpriced, especially when it’s pitted against some of the other TWS earbuds in the market that offer more value for money.

Review Overview
Was this article helpful?
YesNo
TechPP is supported by our audience. We may earn affiliate commissions from buying links on this site.
Read Next
iQOO 11 5G Review: Does It End Your Quest for the Ultimate Smartphone?
#Huawei #huawei freebuds 4i #review