What is Google Wave?

Google Wave is a new in-browser communication and collaboration tool that is already being hailed by some as the next evolution of email. So basically, Google Wave is a real-time communication platform. t combines aspects of email, instant messaging, wikis, web chat, social networking, and project management to build one elegant, in-browser communication client. You can bring a group of friends or business partners together to discuss how your day has been or share files. 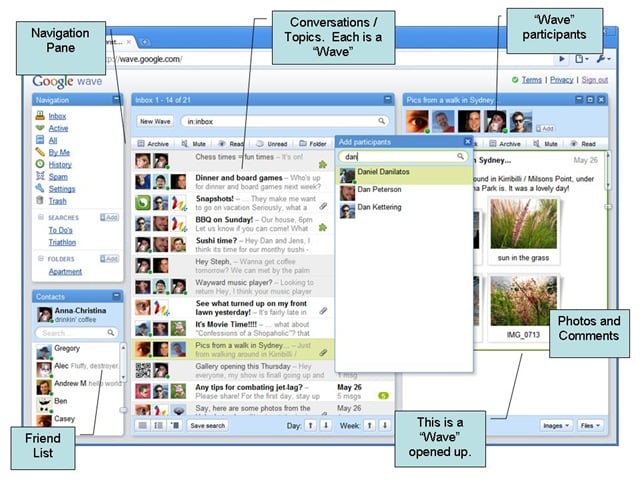 Google Wave is supposed to replace traditional email systems and improve them by using more interactive, live, on-the-fly methods to deliver information. Traditional emails work on a basis of typing a message, potentially styling the message, and hitting “send” and off it goes to the recipient. Traditional instant messaging systems work by typing a message, hitting enter and automatically sending to the recipient for instant delivery. Wave offers a hybrid of the two. If both people are logged on, they can open a conversation (called a wave) and send a message to the recipient which will not only instantly send to the recipient, but the recipient can (optionally) see every letter when you type it and write back instantaneously. This speeds up conversation drastically instead of having to wait for others to reply to press enter to start writing your response. Given that the recipient is offline, they will receive the wave in their inbox in bolded.

1. Real-time functionality : You can see what someone else is typing, character-by-character. It gives the impression of a conversation where everyone is actually in the room with you. This property also applies to real-time changes to multimedia such as images, documents and programs.

2. Embeddability : Waves can be embedded on any blog or website. There is no need for the Google Wave client to be on your desktop in this situation. Visitors to your web page can manipulate the wave straight from the site itself. I see potential in this replacing comments as we know it in blogs.

3. Extensions : An extension is a mini-application within a wave. This is similar to what we have in Facebook or iGoogle. Developers can build their own apps within waves.

5. Drag-and-drop file sharing : No attachments; just drag your file and drop it inside Google Wave and everyone will have access.

6. Mobile support : Google Wave can be viewed on a mobile device.

These are just some of the many features of Google Wave and the possibilities are endless.

No wonder so many people, geeks and non-techies alike, are so excited about this new wave on the web!

Update: Signup for a Free Invite to Google Wave.

Was this article helpful?
YesNo
TechPP is supported by our audience. We may earn affiliate commissions from buying links on this site.
Read Next
How to Fix Google Chrome Translate Not Working
#google #Google Wave #google wave gadgets