Gadgets in Windows 7 and Windows Vista can do more than just show the weather and news. Many of the available gadgets are useful as system utilities that keep track of Windows 7 or Windows Vista resources. Several gadgets have been created that can track CPU, memory, hard drive and network usage.

Gadgets, which were introduced in Vista are mini applications built using XML, DHTML, and JavaScript. In Vista, though, those gadgets were more constrained to the sidebar. Although you could move them outside the sidebar to other parts of the screen, the bar itself would never really go away. In Windows 7, that has changed. The sidebar is no more and the gadgets can sit anywhere on your screen in either a minimized or maximized state. 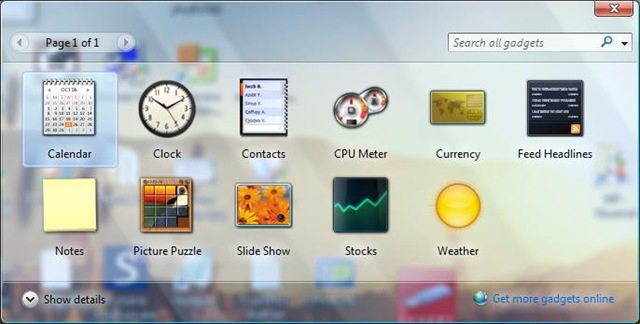 Below are the best resources on Windows 7 gadgets and Windows Vista gadgets that can be used to help keep track of system resources.

Paul Tharott neatly explains the funda behind Windows gadgets, how to install a gadget, what’s changed in Windows 7 and list of useful Windows 7 gadgets.

The official Windows Live gallery contains a huge list of Windows 7 and windows vista gadgets which have been neatly categorized and arranged for easy access.

A nice resource which explains Windows 7 desktop gadgets in detail including managing and customizing the Windows 7 gadgets.

Check out this awesome article by RedmondPie which lists out the 5 must have desktop gadgets for Windows 7 which includes Twitter gadget, a search gadget and more.

Ghacks has listed down 7 cool gadgets which display information and notifications about online services such as Facebook and Twitter or software programs like Outlook or Skype on the Windows desktop.

About.com has listed down 16 System utility gadgets for Windows 7 that can be used to help keep track of system resources. Some of them are really helpful and must have if you ask me.

Hope you found this article useful. Check out other useful Windows 7 tips.

Was this article helpful?
YesNo
TechPP is supported by our audience. We may earn affiliate commissions from buying links on this site.
Read Next
How to Upgrade from Windows 7 or 8 to Windows 10 for Free in 2020
#Windows 7