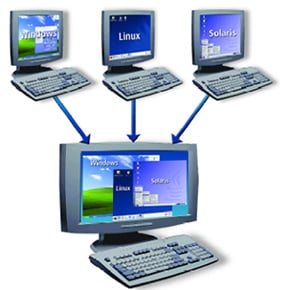 The mistakes that the people inside organizations make when it comes to virtualization are known. When those mistakes are made, the benefits – all the efficiency and cost cutting that it allows – begin to disappear.More important than the increased ibuprofen expense and unnecessary late nights on the job for the IT department, is the
potential for increased security issues, as well as time delays.

To prevent these myriad issues from cropping up, avoid the following common mistakes when implementing a virtualization system across your organization:

1. Don’t allow slippage in the maintenance of patches for the hypervisor. One bug that manages to enter with malice its intention suddenly has access to everything. Prevent the underworld from gaining access to your entire data platform, unless you want to join the IT department in consuming unhealthy amounts of ibuprofen to battle your headaches and sleeplessness.

2. Install firewalls between all virtualization levels which do not share the same security clearance. Otherwise, hackers can access the less protected data with relative ease, then morph their intentions into real harm by breaching the most highly sensitive data. Firewalls will prevent unintended data flow between different security clearances.

3. Set safeguards – many layers of them, in fact – to assure that there is no bad code in the default configuration. Otherwise, as the original system virtualization blueprint is used to create each new portal, security will be compromised as the bad code is replicated.

4. Allowing automated license payment programs to handle the counting of licenses to be paid isn’t a wise route to follow. The complex layering of virtualization enabled systems creates a baffling array of potential license generating data. There’s little that’s worse than paying for licenses you don’t need, unless you’re paying for licenses that essentially don’t exist!

5. Allowing unlimited, unmonitored server creation. Creating a virtual server is extremely easy, and since there’s no cost associated with it, employees often feel free to create as many partitions as they desire. While that may be good for them, it’s a terrible approach to your sensitive data. It creates an extremely unorganized system. Set limits to prevent massive disorganization, and create a system for tracking the servers, as well as the data contained therein.

6. Jumping into a multi-layer server system without first organizing data across the board. When digital information packets become jumbled, then forgotten, then plain lost inside the physical database, it’s essential to organize them. Transferring them haphazardly to a virtual server will ensure they remain hidden forever, which is a lot like losing the information entirely. That approach is the opposite of efficient and doesn’t serve the mission well.

Virtualization can be, and is, an effective method for reducing time and computer waste, if approached with a certain amount of cognizance towards what can, and does, go wrong.

By paying attention to these easily handled half-dozen notions, you can experience a seamless transition from physical, in-house computing to that of intangible, yet infinitely more customizable, data handling.

This is a guest post by Christina Jenkins who is a stay at home mom who loves design and technology. She has recently started guest blogging, and you can follow her on Twitter: @OhJenkies

Was this article helpful?
YesNo
TechPP is supported by our audience. We may earn affiliate commissions from buying links on this site.
#guest-post #virtualization