Ironically enough, a “premium” Symbian phone just stole Nokia’s MWC show. Nokia 808 PureView, the much awaited successor to the popular ‘camera phone’, Nokia N8, was announced a few minutes back at MWC 2012 and it managed to raise enough eyebrows with just one feature – a whopping 41 MP camera sensor! 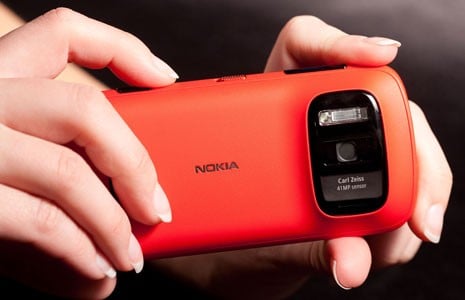 Nokia 808 comes with a brand new PureView technology, which sets a new benchmark with imaging technology on smartphones. Many people have always made fun of Nokia N8 as a camera first and a phone next. It looks like Nokia 808 will manage to carry forward that tradition.

The Nokia 808 PureView features a 41-megapixel sensor which essentially means that you can zoom in up to 3X without losing any of the details in your shot – and there’s no artificially created pixels in your picture, either.

The camera allows for 1080p recording at 30fps, with 4X lossless zoom thanks to the big sensor and powerful image processing which handles over 1 billion pixels per second.

Check out this video sample shot by Nokia 808 PureView.

What more? Nokia 808 PureView comes with 5.1 Dolby Digital Sound technology, and can also records sounds without distortion at audio levels as high as 140dB.

If all these talks about 41MP camera and 1080p HD Video recording were like music to your ears, check out the rest of the specifications.

Nokia 808 PureView is powered by Symbian Belle OS. If you are wondering why it isn’t running on Windows Phone 7.5 mango, it is because the project has been running for over 5 years now and traditionally, Nokia has used Symbian & Meego as their R&D test labs. Nokia did clarify that PureView technology will be ported to Windows Phone in coming months.

What about the display? Nokia 808 features a 4-inch screen with low nHD (360×640) resolution. As for the rest of the important specifications, it runs on a 1.3GHz single-core processor, 512MB of RAM, 16GB of on-board memory, and a microSD card slot.

Pricing is bit dicey as well. Nokia says that the smartphone will cost around 450 Euros (approx $600) and is expected to start shipping in May 2012. There are no details about the launch markets as yet.

Hats off to Nokia for raising the bar yet again with Imaging on smartphones. I can’t wait to see PureView on other smartphone platforms.

Was this article helpful?
YesNo
TechPP is supported by our audience. We may earn affiliate commissions from buying links on this site.
Read Next
Nokia is Rumored to be Working on a “Penta-lens” Flagship for 2018
#Carl Zeiss #mwc 2012 #Nokia 808 Pureview #nokia n8 #symbian