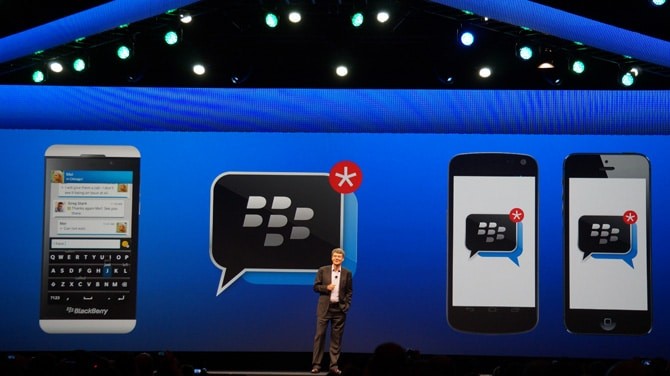 BBM, BlackBerry’s finest software package is now available to download for all Android and iOS users, as the former company known as RIM has finally decided to release the well-known messaging service worldwide, more or less. Besides the two most used mobile platforms online, the Canadian-based firm also made BlackBerry Messenger available to some Samsung App Stores today.

One month after its initial debut on iOS, when BlackBerry found itself overwhelmed by the massive demand and shortly pulled the plug to strengthen its servers, the company has opted for a full-scale release, on most major platforms. As it was thought in the initial wave, BlackBerry still distributes the software in a free to download form. There’s only one small catch, unfortunately.

In order to avoid another server crash and successfully serve all those in need, BlackBerry advises users to download the package for Android or iOS, install it and register themselves with an email address. This address will be used to let owners know when will they have the opportunity of actually using the software, the system actually working like a queue for the moment.

Better news can be found for those who signed-up for information about BlackBerry Messenger on the company’s own website, because you will be able to use the package right-away, without having to wait for an invitation email. That’s over 6 million lucky users, as far as we know.

Another exception occurs in iPhone and non-Samsung Android users based in Sahara, where BlackBerry advises that downloads can only start in three days’ time.

As for the rest of us, there’s no real saying on how long the waiting list actually is and when exactly a person signing up right now will be granted access. In a world currently dominated by messaging applications like WhatsApp, Viber and iMessage, it’s a dangerous tactic to make people wait for something. Even for BlackBerry’s finest piece of software.

As for Windows Phone users, there is no official hint on when or even if BBM will be made available for Microsoft’s mobile platform. I guess that BlackBerry will take the plunge if things go well with Apple and Google.

P.S: BlackBerry touts that updates on how fast the queue actually develops will be issued on their official Twitter account for BBM, among other marketing notifications.

Update: Here are the download links for BBM on Android and iOS. To repeat, you may need to get in queue before you can start using it though.

TechPP is supported by our audience. We may earn affiliate commissions from buying links on this site.
Read Next
Blackberry Key2 LE with Snapdragon 636 SoC and Physical Keyboard Launched for...
#bbm #Blackberry