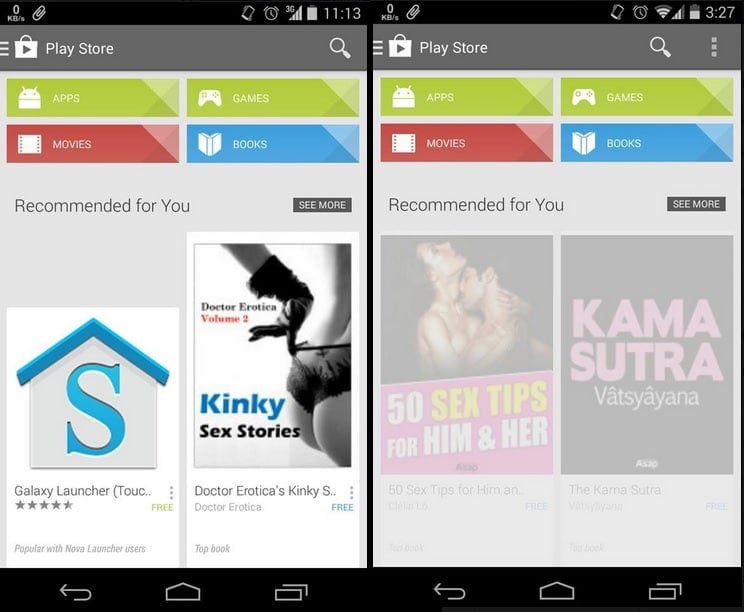 Here’s how apps and books, or just any other recommendation system works: much like personalized ads, which are targeted at one’s personal taste – the things you buy online, the things you seem to be interested in, Google logs relevant content. If that wasn’t scary enough, it also shows you what your friends (or people you’ve in your Google+ circle) are recommending. I, for one, am not really a fan of erotic content, heck, even if I was, I wouldn’t use my work email ID to access such things. But apparently, Google doesn’t really care about what you’re surfing as it assumes that you would want to access such content, nonetheless.

An interesting observation, which could be the reason why Google hesitates to get such filthy content out of its system, is the popularity. These apps are tremendously popular, just see the number of downloads. As awesome as Google is, at the end of the day, it always comes down to the money.

As far as the terms and conditions go, Google is against any sexually explicit material. Under the content policy of its Google Play Developer program, the Mountain View tech giant states,

Yet, it’s slowly, if at all, taking any action against it. Even if Google decides to remove all such apps, the problem is that many apps are disguised behind perfectly normal app description and icons. It is when you download it and start using that you realize what’s going on.

If it really wants to compete with Apple’s App Store, not only does it need apps, but control over those apps as well. Even specific keyword search on iOS’s App Store and even Microsoft’s Windows Phone Store don’t bring out half as polluted content as Google would suggest on a normal sunny day.

Was this article helpful?
YesNo
TechPP is supported by our audience. We may earn affiliate commissions from buying links on this site.
Read Next
How to Fix Google Chrome Translate Not Working
#google #Play Store