You can Watch WWDC 2014 Live Stream Online, Thanks to Apple

Apple’s annual Worldwide Developer Conference (WWDC) will kick off on Monday, June 2nd with a keynote from the CEO, Tim Cooks, and this time, users from around the world will be able to see what the company announces thanks to a live streaming video of the keynote presentation. 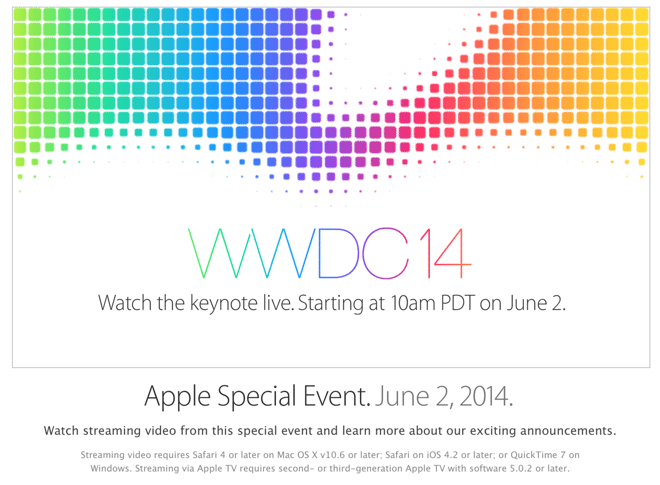 A lot of things are changing with the Cupertino giant and the one we welcome the most is how the company is finally ready to live stream its official keynote more often than before. Apple has updated its website to reveal that the users will be able to catch some “exciting announcements” made at WWDC live online. Of course, it comes with some riders – streaming requires Safari 4 or later on OS X 10.6 or later, Safari on iOS 4.2 or later. If you’re a Windows user, you aren’t out of luck either, as you just need to ensure that you have the QuickTime 7 installed on your Windows PC. Streaming will also be available via the Apple TV to users with the second- or third-generation model running software 5.0.2 or later.

You can watch WWDC keynote live online over here.

The event will begin live at 10 am Pacific, 1 pm Eastern next Monday, i.e 10.30pm Indian Standard Time. Apple is widely expected to introduce the next-generation versions of its iOS mobile operating system and OS X Mac operating system at WWDC this year. In addition to that, there are rumors about a new Smart Home platform being announced was well.

The next major version of iOS, the iOS 8 is rumored to focus on consolidating health and fitness tracking devices as well as smart home appliances, making them easier to control and use with a compatible iPhone or iPad. In addition to this, Apple is expected to announce a visual refresh for its next major OS X release.

Few other rumors point towards new hardware announcements coming up at WWDC, including new Apple TVs, an iWatch and retina Macbook Airs. We shall keep you updated with more information over the next few days. Stay tuned.

Apple Q4 2019 Results Show Record Growth in India thanks to…
How to Live Stream on YouTube Using OBS on Mac
IPL 2022 Live Streaming: How to Watch IPL Live in India, US,…
Get ready to pay more for Smartphones in India thanks to…
You Can Now Install Google Recorder with Live Transcribe on…
Apple Watch SE vs Apple Watch Series 6: Key Differences and…