Last week, Microsoft announced the features of Windows Phone 8.1 Update 1, the next iteration to its mobile operating system. As promised, the company has started rolling out the said update to developer preview users. 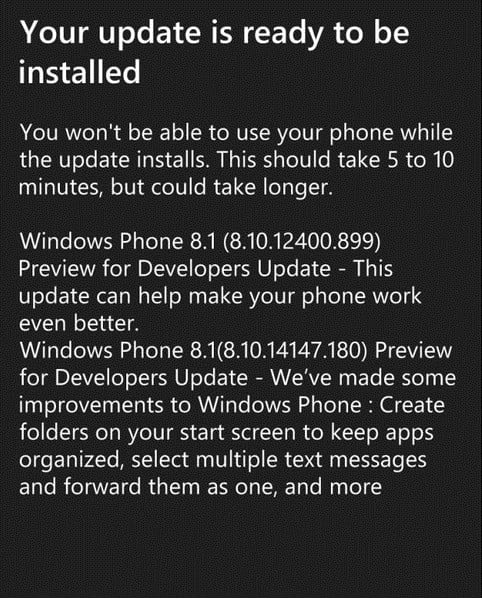 The update brings along a plethora of features, chief among them are Live Folders, Cortana in new regions — including China, India and Australia, native support for several more screen resolution and a gamut of network enhancements. Besides that, we will also have improvements in Xbox Music, an app called Apps Corner, improvements in SMS app among others. You can read the most important features of Windows Phone 8.1 Update 1 here.

How to get Windows Phone 8.1 Preview Developer on your phone

To snag the update, you need to head out to Settings > Phone Update > tap to check for update. Microsoft has also confirmed that users with Windows Phone 8.1 Developer Preview who weren’t able to snag the final Windows Phone 8.1 release or Lumia Cyan update (for Lumia users) will also be able to get the update on their handsets.

For those wondering how to snag the update. Any handset running on Windows Phone 8 and higher will be able to receive the update. And while Microsoft officially makes it available only for the developers, others can also get the update with a simple way around.

You can read more about it — including downsides of getting this update  here.