Redmi 1S Gaming Review: No Heating Issues but has a Bigger Problem

Xiaomi’s Redmi 1S will be going on sale on Flipkart tomorrow (Sep 2nd 2014) for a staggeringly low price of just Rs.5,999. Although there’s no denying the fact that it carries the best specs on paper as compared to ANY smartphone in its price range, many of you wanted to know how well it performs as a gaming device and if there are any heating issues with the phone. Well, we tested and found out some interesting things.

If you care to watch the video analysis, here it is. If not, jump below to read it out.

The Redmi 1S comes with a Quad-core Snapdragon 400 processor from Qualcomm clocked at 1.6GHz, along with Adreno 305 GPU and 1GB of RAM. This is very similar to the Motorola Moto G, which has the same processor, but under-clocked at 1.5GHz. As we found out in our Moto G Review, the phone fared pretty well when it came to gaming performance. It was able to handle most of the graphics intensive games like Asphalt 8, FIFA 14 and Shadow Gun without many issues. So, our expectation was that Redmi 1S will be able to do the same as it carries pretty much the same internals as the Moto G. 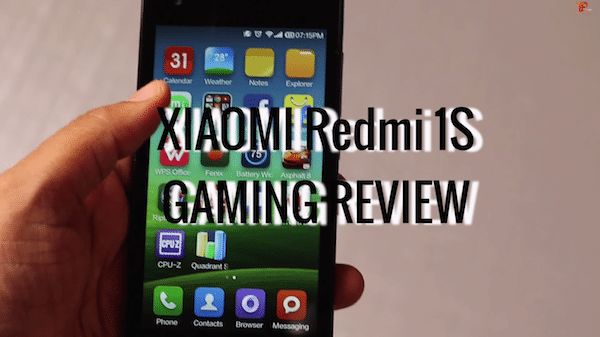 But sadly, it didn’t turn out that way. As you saw in the video above, Asphalt 8 kept crashing and it needed a restart to fix the issue. That’s a bummer for us. No, none of the phones in this price range can even think about running a resource intensive game like Asphalt 8 under HIGH graphics settings. But the specs on paper made us expect Redmi 1S to perform just as well as the Moto G (which costs 40% more than Redmi 1S) when it came to gaming.


Rebooting the device does resolve the crashing issue, but extended gaming sessions and multi-tasking brings it back, which is damn irritating. We must mention here that the crashing issue was specific to Asphalt 8, as other games like Riptide GP2 and Dead Trigger 2 without breaking a sweat. When it works, there are no lags to be seen. Also, our device didn’t heat up as much as some people on twitter and blogs have claimed. Extended gaming session does make the device warm, but that is nothing out of the ordinary.

It remains to be seen how Xiaomi will address these crashing issues. Although we saw it only on Asphalt 8, we have been told that the issue is present even on NFS and few other games. There’s just around 240MB of free RAM out of 1GB at any point of time, which might be the reason for these issues, so there’s hope that Xiaomi can fix it through a software update.

If you have any other question, do let us know through your comments section below, so that we can answer them in our detailed review coming your way very soon.

Redmi Note 8 Pro Review: Much Bigger, Much Better - Plizz to…
Redmi Watch 2 Lite Review: Betting on a bigger display
The Redmi Note 11 series arrives in India... but has it put…
Redmi Note 11T 5G Review: A Redmi Note 11, but not THE Redmi…
Lenovo Carme Review: Just Another Fitness Tracker with a…
Samsung Galaxy Z Fold 2 with Bigger Screen and Improved…