There are big chances that the smartphone you’re holding right now in your hand is protected by a layer of glass manufactured by Corning. And to put things in perspective, Corning says there are more than 3 billion devices out there that are using the Gorilla glass. Now the company has announced Gorilla Glass 4, their newest solution for protecting the precious displays of our smartphones.

When it introduced the Gorilla Glass 3 last year, Corning boasted its “native damage resistance” which helped mainly against scratches. With the current generation, it seems that Corning looks to improve what seems to be the most dangerous thing to happen with your device under normal use – drops. 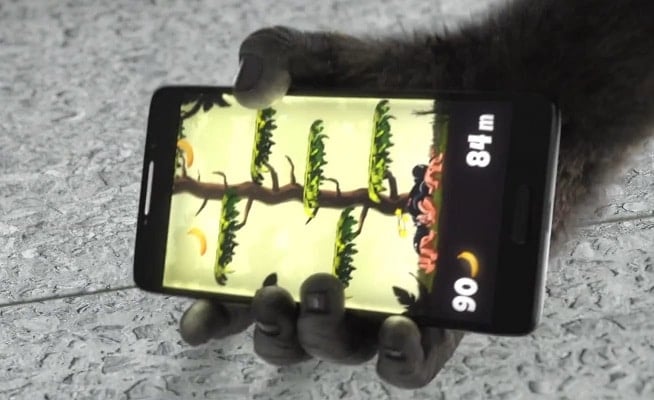 Corning’s scientists have examined many broken screens during the development of Gorilla Glass 4, trying to understand how can they solve this problem. They created drop tests that used 180-grit sandpaper to simulate rough surfaces. They dropped Gorilla Glass 4 and other rival glasses from around one meter and discovered that Gorilla Glass 4 survived sharp drop impacts up to 80 percent of the time and showed up to two times improvement over Gorilla Glass 3.

Gorilla Glass 4 comes with improved damage resistance but it has the same optical clarity as prior versions. Many speculated that Corning will choose sapphire for Gorilla Glass 4 but it seems that they have decided to stick with glass:

“When it comes to visible scratch resistance, sapphire is top of the line. But introduce even slight damage or stress, and sapphire “trails Gorilla by quite a bit” in durability from that point on. When you line up all the things that consumers are interested in, the Gorilla exceeds in more of them than any other material at this point in time”

Even with this new product, there is still a big chance that if you drop your smartphone with the screen facing the concrete you will get a cracked display. However, next year’s phones will be stronger than the current ones and this can only be a good thing.

Despite being regarded as the absolute leader in its field, Corning faces competition from low-end glass makers who make products for inexpensive phones. Display industry analyst Paul Semeza weighs in:

“Generally those cheaper solutions are not as good, in physical durability. But for low-end products they could be good enough.”

Gorilla Glass 4 is manufactured by using Corning’s proprietary fusion draw process which helps maintain the thinness, durability, and optical clarity; and now it also improves drop performance. So, when you’re going to buy a new smartphone or tablet next year, make sure that it has the latest and greatest in terms of screen resistance.

Was this article helpful?
YesNo
TechPP is supported by our audience. We may earn affiliate commissions from buying links on this site.
Read Next
Corning announces Gorilla Glass Victus with much improved Drop & Scratch ...
#corning