Fairphone is an unusual phonemaker, as it tries to build a phone which does not contain conflict minerals and which has been manufactured using fair labor conditions only. Furthermore, the Dutch company’s phones are modular and allow owners to open, repair and replace nodules on their own. 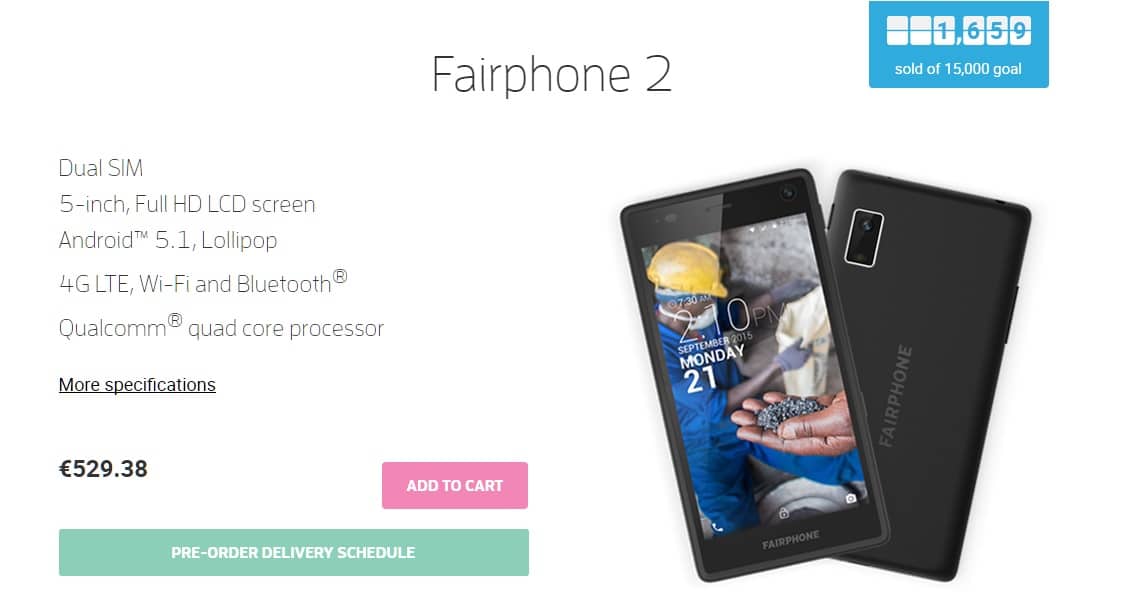 After announcing the Fairphone 2 back in June, the company has now made it available for pre-order. The handset will set you back €525 and you should get it delivered sometime in November of this year. According to the pre-order page, it seems that Fairphone is target a goal of 15,000 preorders, which is probably the target that they need to reach in order to become profitable. Bas Van Abel, the CEO of Fairphone, said the following:

To order the necessary components to assemble the first phones and to generate the income required to ensure continuous production, we’ve set a lofty goal: We want to sell 15,000 phones by the end of September.

Van Abel points out that phones will be delivered in the same order as they are purchased, which means the quicker you order, the quicker you’ll get Fairphone 2. If you pre-order before 30 September, you will receive a special edition of the Fairphone 2 which will look the same from the outside, ‘but when you open it up you’ll see something special that lets you know how important you are to us,’ the executive adds.

The initial pre-order phase will see the company sell the devices through their online shop but later this year they will partners with such European retailers as KPN, The Phone Co-op, Faircustomer/Sinndrin, Vireo and ETC Mobil. The downside is the device won’t be available for purchase outside of Europe during 2015 and we don’t know at the moment when exactly it will become available to other parts of the world. As a reminder, here are the main specs of the device:

Of course, the smartphone is fully modular, which means users can easily repair or upgrade it whenever they feel like it. The company wants to be as transparent as possible, that’s why it will soon make public its cost breakdown:

In that respect, we’re busy creating a cost breakdown so you can have a greater insight into how we run our company and where your money goes. We’re not quite there yet, as there are still costs for manufacturing and logistics that are not final, for example assembly costs or packaging, which will contribute to a more accurate cost breakdown before we can publish it.

This is definitely looking like one interesting device and we will be curious to see what will be the reaction and feedback from users and reviewers.