I have fond memories of playing Angry Birds, on my iPod Touch, way back in 2010. It was probably the best $0.99 I ever spent. This was when Angry Birds was just starting to seep into the pop culture. Since then, there have been 13 different versions of Angry Birds games. All expansion packs or spin-offs. I haven’t completed any one of them. I barely tried the Star Wars version. To me, the original Angry Birds is still the best Angry Birds. Now, though, after 5 years (wow), we finally have a sequel. And I’ve been playing it since yesterday.

Angry Birds 2 is the first free major game in the series and it’s out for iOS and Android And just like any other free game in 2015, it’s laden with in-app purchases and ads. To me, though, the striking difference is just how heavy the game is. Angry Birds was a casual game with really simple and cartoonish graphics. Even on my old iPod Touch 3rd gen, I could start playing in a couple of seconds. Not here, though. On my OnePlus One it takes more than half a minute to load and log in to Play Games. 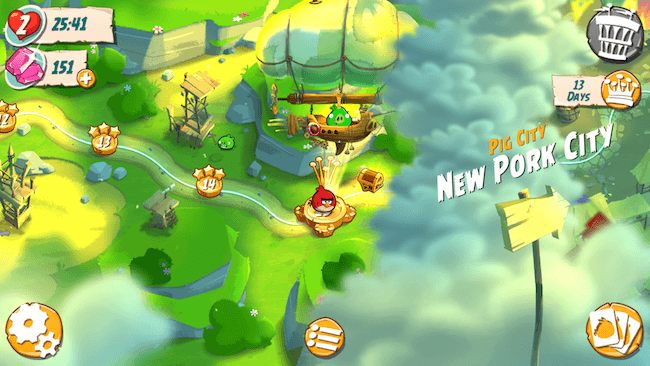 And compared to the old one, this game is grandiose. There are different worlds and levels and stages inside those levels. Plus, you have special power-ups. Oh, and there are big fat boss piggies that are ever so harder to knock out. And on each level you’re given birds in the form of cards. When you are out of cards, you have a couple of options. Either watch a video ad, get a bird for 60 gems or start the whole level again. As levels are now chapter based as well, games will not be inclined to do that. Gems packs range from $0.99 to.. well.. $99.99.

Angry Birds 2 might just be peak Angry Birds. Graphics are sharp (yet cartoonish), the music overlaps with effects in such a way that it’s sometimes nauseating and there are unnecessary effects everywhere. When you hit a pig sideways, sometimes they fly right into the screen, towards you. Seriously Rovio, is this the best you could do?

I think Angry Birds 2 is a lot easier to play, almost to a fault. I remember that getting 3 stars after the first few levels for me was virtually impossible. Here, though, I’ve had to watch 2 video ads to get back birds in the first 20 levels but I still got three stars in all of them. My friends and I used to be obsessed with getting 3 stars in Angry Birds. We kept coming back to the game just to get 3 stars on all levels. In Angry Birds 2, they’re nothing more than a prop. 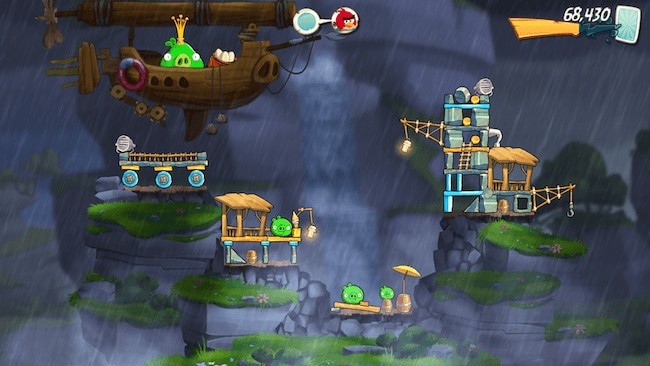 But all is not lost. This is still Angry Birds. Even in 2015, people like knocking down pigs by swinging cute little wingless angry birds at them. It’s built into us. If you are willing to watch the video ads, you can probably get through the game without ever paying up.

Angry Birds 2 then is the Angry Birds for the times we live in. I’m going to continue playing the game because it still makes for a good time killer. But when I do get stuck somewhere, I don’t know if the game will provide me with enough motivation to come back, like its predecessor did. But hey, it’s free. It’s Angry Birds. Try living like it 2010 again. Only, don’t be scared of what a monster we’ve created in in-app purchase model.

Redmi Note 8 Pro Review: Much Bigger, Much Better - Plizz to…
Corning announces Gorilla Glass Victus with much improved…
The Mi Mix Alpha is super cool, but just HOW much display do…
Why do tech reviews take so much time?
[Tech Ad-ons] OnePlus 7T: RDJ Plus Dance… and not much else
It sure is cool, and happening, but how much do you REALLY…