TWS have become a part of our lives ever since Apple unleashed the AirPods on us way back in 2016. So much so that they have become largely predictable in terms of design and functionality and even audio quality.

Carl Pei’s new enterprise, Nothing, added some transparency literally to the design of TWS with the Nothing Ear (1) in 2021, which came with semi-transparent buds and a case. A year later, Nothing has come out with its second TWS, and once again, the accent here is as much on style as on sound.

Nothing Ear (Stick) Review: Standing out, minus tips

For, let’s face it, one of the biggest reasons most folks will have for buying the Ear (Stick) will be their design. The buds themselves are somewhat similar to the Nothing Ear (1), with semi-transparent handles with a red dot marking the bud for the right side, but this time come with tips of a fixed size. That is because, like in the non-Pro AirPods, they are on-ear rather than in-ear and hang from your ears rather than being stuck inside them. There are no air tip options, so you cannot adjust the fit of these buds – it is one size, and that is it.

It is how you get to these buds that is the charm. It also reveals the reason for their rather less-than-routine names. The Ear (Stick) comes in a tube-like cylinder, and you just rotate the base of the cylinder for the buds to be uncovered. It is a bit like lipstick; from where this set of TWS get their name – lipstick, Ear (stick), geddit?

Just as you rotate one end of lipstick to reveal it, you just rotate the base of the case to take the buds out and use them. The case is semi-transparent, with the buds being clearly visible through it, and placed inside a white enclosure. The top of the case has a red accent and also houses the USB Type-C port and a metallic dot-like button for connectivity. The case is made of plastic but seems sturdy enough. The buds are lightweight, just about 4.4 grams each, and come with IP54 dust and water resistance, making them good enough for the gym, although not for swimming. 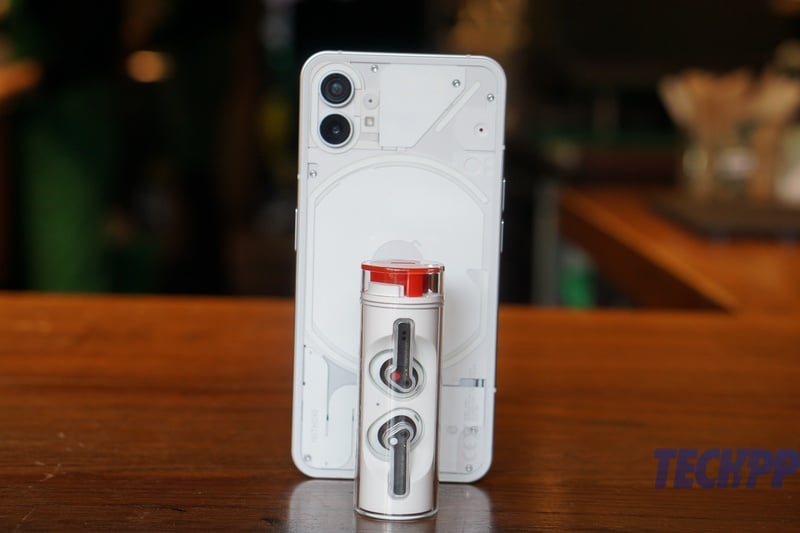 The Nothing Ear (Stick) are designed to stand out in the TWS crowd in design terms, and they totally do so. The buds might have stuck to the core design philosophy of the Ear (1), but when placed in their case, they look unlike any TWS out there. The white part on the inside might get dusty, but the hinge movement is smooth. These are definitely eye-catching and, at around 50 grams with the case, are very light and easy to carry too. Incidentally, although rounded and cylindrical, the case will not roll if you place it horizontally on a flat surface but will simply be face up no matter how hard you push it.

The Ear (Stick) buds are not going to be snug fits because they tend to hang from rather than tunnel inside your ears. As a result, external sounds are not “sealed” out, and there is no question of noise cancellation or isolation. You are going to hear some external noise with the Ear (Stick) in your ears. While that might annoy some people, there are plenty of users who actually prefer buds that do not dig deep into their ears and which actually let some ambient sound in. These are handy for situations where you need to be aware of your surroundings, like taking a stroll or a run outside. Unfortunately, the buds are not designed to be snug fits, so using them during hectic activities such as running or exercising in a gym is likely to be a hit-and-miss experience. They did drop out of our ears a few times. 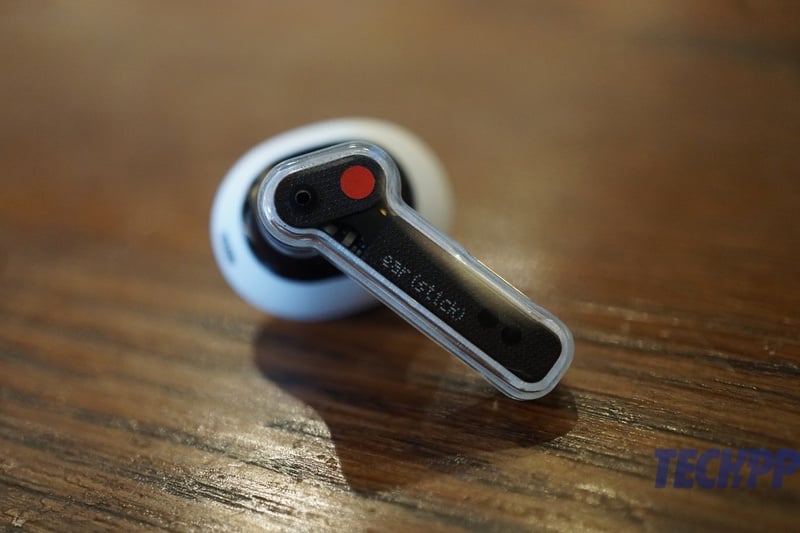 Pairing them with a phone is simple enough – press the connectivity button on the top of the case with the buds inside and use Fast Pair to quickly connect to an Android device, or just pick the Ear (Stick) from the list of devices on the Bluetooth device list on an iPhone.

In both cases, however, you would be advised to download the Nothing X app, which allows you to do more with the buds. Mind you, if you use the Ear (Stick) with the Nothing Phone (1), you do not have to download any app – connectivity is baked into the phone, which indicates that the brand is looking to build its own ecosystem.

The user interface of the buds has been tweaked, as compared to the Ear (1). Whereas the Ear (1) revolve around taps and slides on the stem, the Ear (Stick) responds to pinches or squeezes. 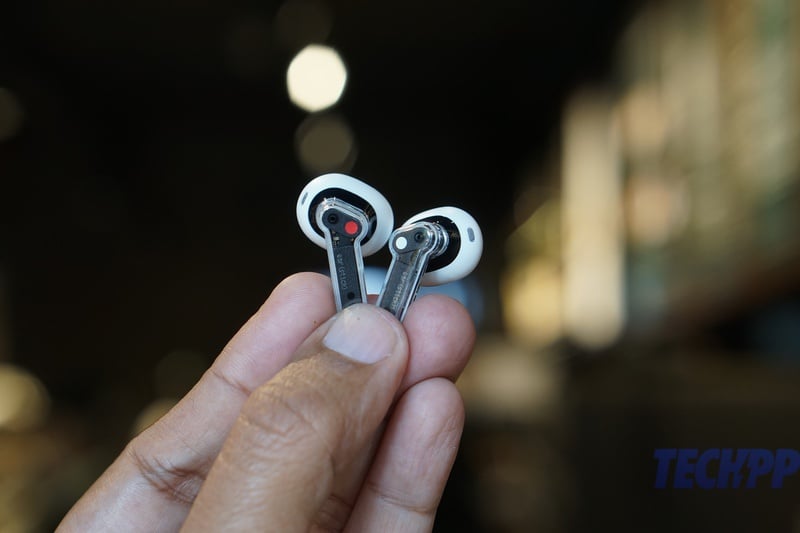 And remembering those takes some time. A single pinch can play or pause content or answer a call or end it. A double pinch takes you to the next track or declines an incoming call. A triple pinch takes you a track back while pinching and holding the right bud increases volume and doing the same on the left bud decreases it.

Apart from the single pinch controls, the others can be customized. Although the stems of the buds are sensitive enough, this is not the most intuitive interface, and timing the pinches takes some getting used to – we often found that two pinches registered as pause and play rather than moving us to the next track! Audio pauses when you pull out one of the buds, which is a neat, smart touch.

The app is simple enough to use and enables you to customize controls, gives you access to an equalizer, and even lets you download firmware updates.

Nothing Ear (Stick): Clear sound and calls too 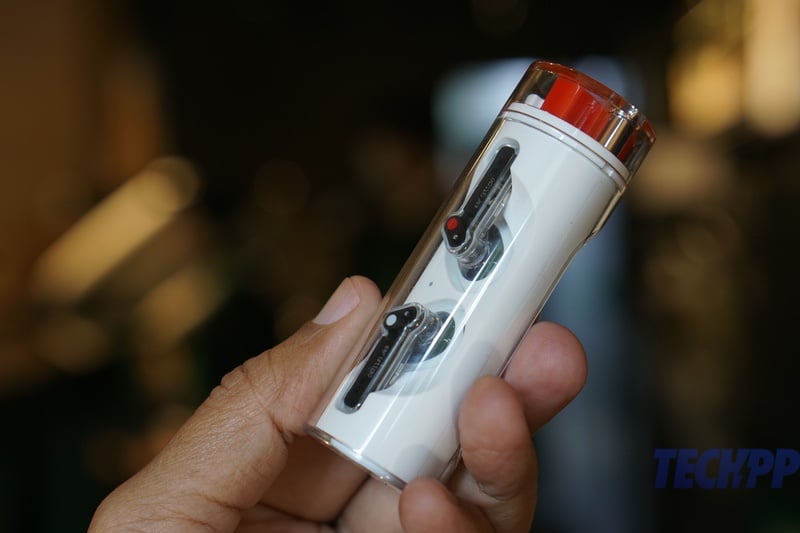 The Nothing Ear (Stick) have a sound signature that is in some ways similar to that of the Ear (1). Just like those buds, the Ear (Stick) buds have a rather pronounced treble and handle mids well.

However, given the fact that the Nothing Ear (Stick) hangs on your ears rather than go inside them, the bass is a trifle understated, although you can pump it up using the equalizer.

Nothing claims that the buds come with a “bass lock” that detects a dip in the bass due to the half-in-ear design and attempts to compensate. We did not see it making a massive difference and got better results by tweaking the in-app equalizer’s bass settings.

The 12.6 mm driver delivers impressively high volumes, making the buds handy to use even in noisy conditions. In terms of codecs, the buds support AAC and SBC codecs – there is no support for aptX or LDAC, which might disappoint some users at this price point but is unlikely to affect regular ones. 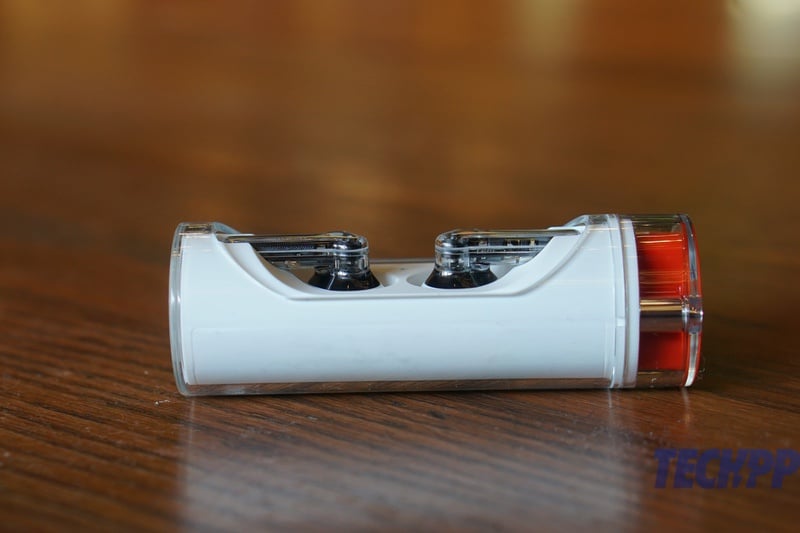 In terms of sound, the Ear (Stick) earbuds are great for anyone who has a liking for classic rock, pop, and jazz. They have impressive clarity and are very good at handling sharp sounds and vocals. If you are a bass fan, we would recommend tweaking up the settings in the equalizer and listening in a relatively quiet place, but even then, these are not exactly basshead territory. We would say that they are impressive in terms of volume and clarity and are comfortable to listen to, but they are not the greatest for those who love action-packed games or films.

They are very good for podcasts, though. Phone (1) users will also be able to access a low lag mode that switches on automatically and is good for gaming, although most users might not notice it immediately.

The Nothing (Stick) buds are very good for phone calls. Calls came through very clearly, and those we spoke to said that our voices sounded loud and clear, even when we made calls from slightly noisy areas. 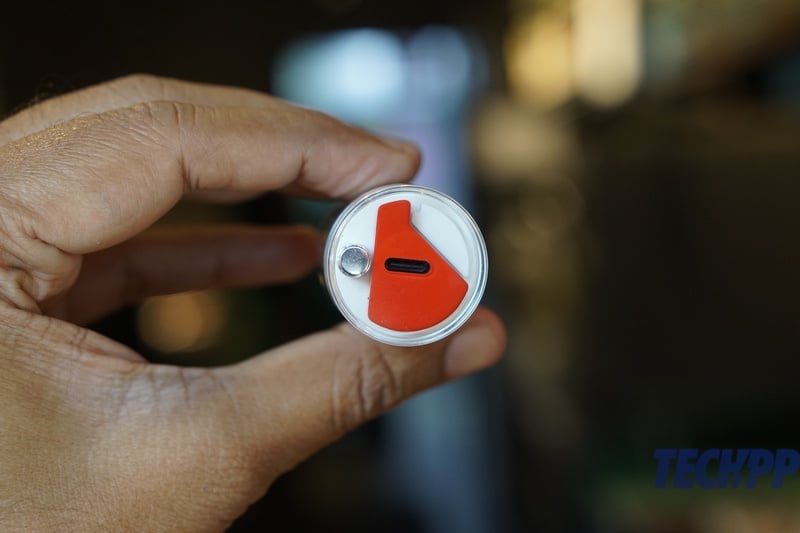 Nothing claims that the battery life of the Ear (Stick) buds is 7 hours, and we generally got about six hours, although we suspect that could be because we often used the buds at high volumes as we were using them in relatively loud environments. Still, that is better than what we got from the OG AirPods and AirPods Pro.

The case is supposed to recharge the buds fully three times, and that seemed to be the case (pun unintended). Even heavy users should be able to see through a week on a single charge. There is no wireless charging, though, which is a bit of a surprise given that Nothing has included that feature in its other products. But the form factor of the Ear (Stick) may be responsible for that.

Nothing Ear (Stick) Review Verdict: Worth a buy, especially after a price cut? 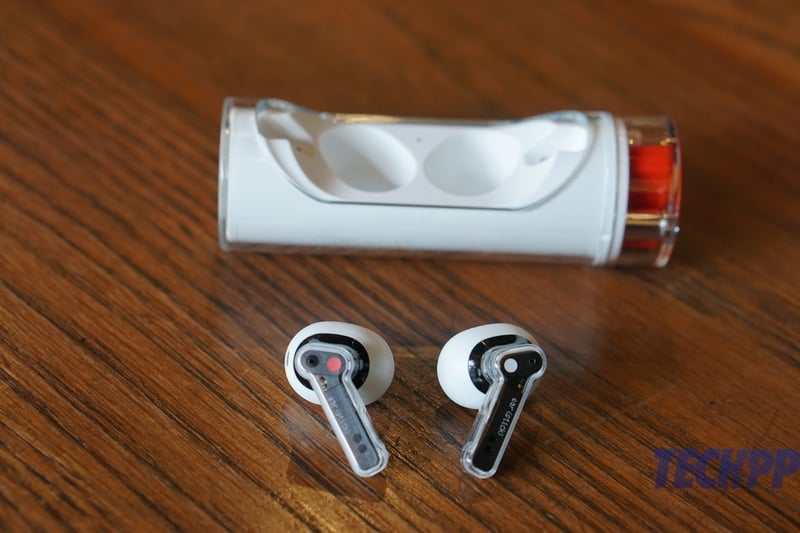 The Nothing Ear (Stick) were launched at Rs 8,499 ($119), and at that price, they seemed definitely on the expensive side. They have since been available at lower prices and, at the time of writing, were available for Rs 6,999 (and $104 in the US).

In terms of features, even this lower price makes them appear expensive when you consider that there are earbuds with good audio quality and ANC in that range. One of those is the Nothing Ear (1) itself, although those are not frequently on sale these days.

There are also the Sennheiser CX Plus, Jabra Elite 4 and the Amazon Echo Buds, which are often available at close to Rs. 7000- Rs. 8000 with offers. The Pixel Buds A are also a great option for those who want smart functionality.

However, none of those worthies come with the kind of style quotient that the Nothing Ear (Stick) buds have. These are more of a style investment than a sound one, although they sound good too. If you are one of those who wants TWS that sound decent, look different, and do not dig into your ears, there is nothing quite like these right now. Pun intended.

Review Overview
Was this article helpful?
YesNo
TechPP is supported by our audience. We may earn affiliate commissions from buying links on this site.
Read Next
Nothing Ear (1) Review: Quite an Eyeful and an Earful too!
#ANC #nothing #Nothing Ear (Stick) #review #TWS